Initial estimates suggest that one crore people were affected by the cyclone and that over three lakh houses were damaged. 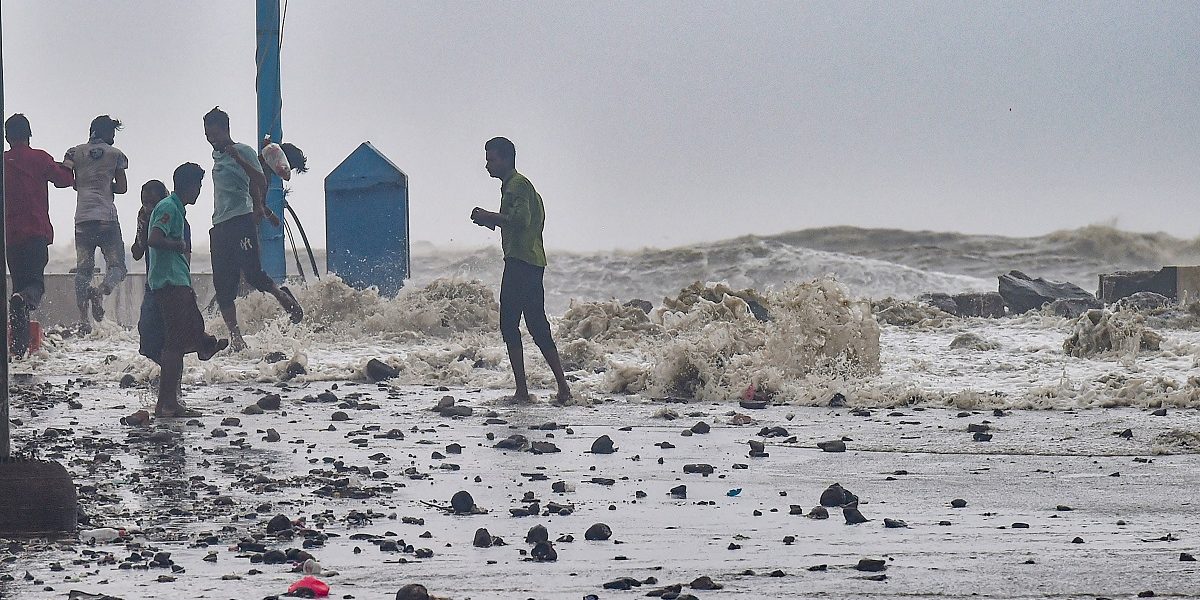 Locals near the coast as Cyclone Yaas makes landfall at Digha in East Midnapore, May 26, 2021. Photo: PTI/Swapan Mahapatra

The storm surge triggered by the cyclone, which coincided with the perigean spring tide because of Wednesday’s full moon, caused an extraordinary rise in the water level in several rivers.

“When the cyclone hits, there is also the spring tide. The maximum damage was caused by the storm surge this time. The damage was maximum in the coastal districts of East Midnapore and South 24 Parganas,” said Sanjib Banerjee, deputy director-general of India Meteorological Department (IMD)’s regional office in Kolkata.

Yaas made landfall near Dhamra in the Bhadrak district of Odisha between 9:30 am and 12 noon on Wednesday. Bordering Odisha, Bengal’s East Medinipur, South 24 Parganas and parts of North 24 Parganas districts were the most affected, the regional office of the IMD has confirmed.

Tourist towns of East Medinipur like Digha, Mandarmani, Tajpur and Shankarpur, which are located close to Balasore district of Odisha, were swamped. The sea water rose to unprecedented levels, damaging hotels, local shops and nearby residential areas. In certain areas, the waves were seen surging as high as coconut trees.

Bibash Misra, a resident of Ramnagar who owns a shop near Digha beach, told The Wire over phone, “My shop was completely damaged. Water level in the sea went up to 25-30 feet. Boulders, rocks used for embankments are now on the roads, that was the power of the wind and waves. No one knows the extent of damage and destruction as high tides are prevailing and wind is still powerful.”

Ashish Das of Nandigram told The Wire, “Our village was completely flooded. We were evacuated on Tuesday and are staying at a relief centre in Dayamoyee high school. We still don’t know what is the present condition of our house and village. The local administration advised us not to return today. So only tomorrow (Thursday) morning will we know the level of damage.”

Around 35 teams of the National Disaster Response Force (NDRF) were deployed in Bengal, in addition to the eastern command of the Indian army deploying 17 columns of forces to assist the state government in evacuation and rescue operations. A view of the Howrah bridge and a swollen Hooghly river, triggered by cyclone Yaas, in Howrah, May 26, 2021. Photo: PTI

The West Bengal administration has claimed that it has evacuated around 15 lakh people to cyclone and relief shelters. One death was reported in Bengal, which the administration claimed was “accidental”, as the person drowned after he left the cyclone shelter to catch fish.

Addressing a press conference from the state secretariat Nabanna, chief minister Mamata Banerjee said, “As per our initial assessment, close to one crore people were affected due to the cyclone. Administration evacuated over 15 lakh people. Evacuation process is still on. Over three lakh houses were damaged. Embankments were breached in 134 places, the number will go up as reports were due from many areas. The extent of damage can only be determined after the field survey. It will take at least 72 hours.”

Banerjee said sectors like agriculture, electricity, fishery, animal husbandry and horticulture were the worst affected as sea and river water gushed into the low-lying areas, inundating scores of villages. She said that she will personally visit some of the affected areas in Midnapore, South 24 Parganas and North 24 Parganas on May 28.

In the South 24 Parganas district, thousands of villagers were displaced in Kakdwip, Fraserganj, Gosaba and in the Sunderbans delta, as houses were extensively damaged due to gushing river water.

The famous Kapil Muni temple in Sagar island was completely submerged as tidal waves crashed over the boundary walls. Some reports suggested that many fishing boats anchored in Kakdwip were destroyed.

Sagar Island, at the confluence of Bay of Bengal and Hooghly river, was inundated by the storm surge due to #CycloneYaas. Water entered the Kapil Muni temple pic.twitter.com/ENHig0TM7y

Embankments which prevent the Dansa river water from entering the villages and farmlands were breached in three areas in Sulkuni. Life has been halted in most parts of Hasnabad as the cyclone washed away roads and snapped electricity supplies, leaving many areas without basic utilities.

Majida Khatum of Nazat, Sandeshkhali block in North 24 Parganas told The Wire over phone, “Embankments were washed away. In some places, water was flowing over the embankments. A whole village was flooded. Some families took shelter in a nearby high school, some are staying at their neighbour’s house. Our main source of income is fishing, so everything is gone.”

In certain low-lying lockets of Kolkata, water-logging was also reported. Authorities are facing a tough time clearing the area due to the Ganga’s high tide. A senior official of the Kolkata Corporation, speaking on condition of anonymity, told The Wire, “Orders are there to work round the clock. Water levels in rivers are still very high as high tides are going on. We were well prepared this time. In some pockets water-loggings are there, we expect it to subside by Thursday morning.”