The "extremely-severe" cyclone, one of the "rarest of rare", unleashed copious rain and windstorms up to 240 kmph on Friday. 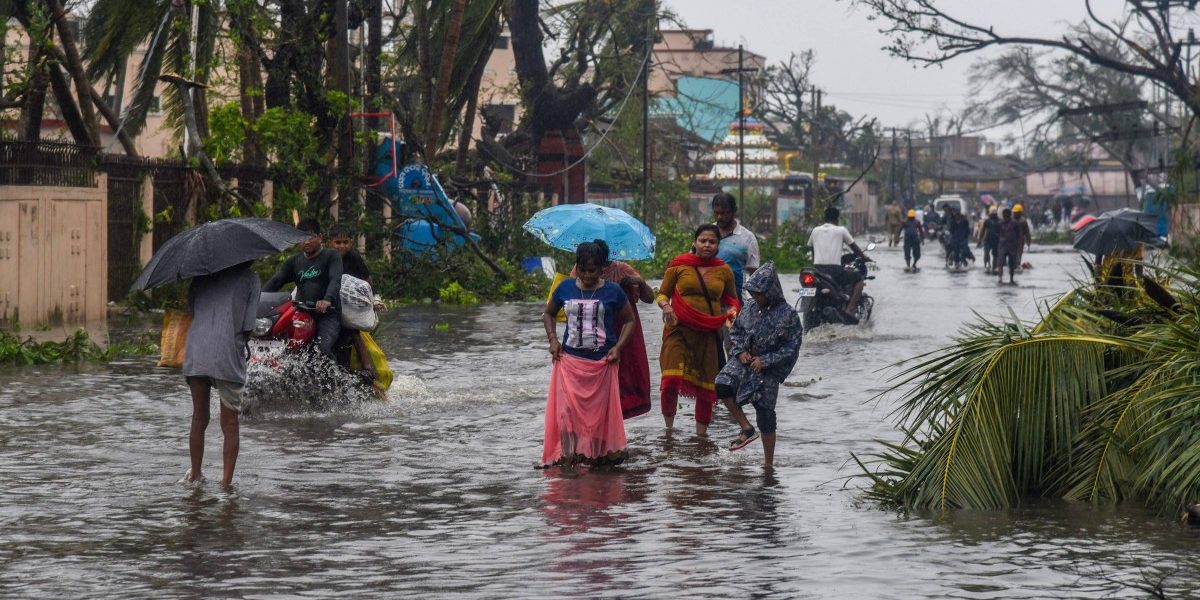 Puri: People wade through a flooded street after Cyclone Fani made its landfall, in Puri, Friday, May 3, 2019. Credit: PTI

Bhubaneswar: The death toll due to Cyclone Fani mounted to 34 in Odisha on Sunday, two days after it caused widespread damage in the coastal region and left hundreds grappling with water shortage and power cuts, an official said.

Although the official figure is 34, many more are feared dead in the calamity as information from several areas, including the severely-damaged Khurda district, is still awaited.

The number of people affected by the cyclone has also jumped to around 1.08 crore in 14,835 villages spread across at least 11 districts, the official said, adding that over 13.41 lakh people had been evacuated in a span of 24 hours ahead of the disaster.

Chief minister Naveen Patnaik has already unveiled a relief package for those affected by the calamity.

In Puri and in parts of Khurda that have been “extremely severely affected”, families will get 50 kg of rice, Rs 2,000 in cash and polythene sheets if they are covered under the National Food Security Act (NFSA), Patnaik said.

For the rest of Khurda district, categorised as “severely affected”, the NFSA families will get a month’s quota of rice, Rs 1,000 and polythene sheets, Patnaik said.

Those living in the “moderately-affected” districts of Cuttack, Kendrapara and Jagatsinghpur will be eligible for a month’s quota of rice and Rs 500 in cash.

Patnaik, who visited the cyclone-ravaged Puri and distributed relief to the affected people, claimed that water supply had been restored in 70% areas of the seaside pilgrim town and 40% of the places in Bhubaneswar.

Also read | Extreme Events in the Himalayan Region: Are We Prepared for the Big One?

“I hope water supply will be fully restored in Bhubaneswar shortly and at least in 90% areas of Puri town by Monday,” he said. “The government has made arrangements to provide cooked food for free over the next 15 days. We will also take up tree plantation on a mission mode.”

Patnaik, however, could not give the details on the status of the ongoing work for power restoration in the affected areas.

“We have to be very careful to avoid accidental electrocution,” he said, when asked if power supply will be restored in Bhubaneswar, which continued without electricity for the third day on Sunday.

According to Chief Secretary A.P. Padhi, 21 of the 34 deaths were registered in Puri district, where the storm made a landfall on Friday, flattening fragile houses, uprooting scores of trees, electric poles and mobile towers.

Giving the break up, Special Relief Commissioner (SRC) B.P. Sethi said four deaths each were reported from Jajpur and Mayurbhanj districts, and two from Cuttack, while Kendrapara district accounted for three casualties.

The massive evacuation, touted as the largest ever ahead of a natural calamity in the country, played a major role in keeping human casualties to a minimum, he said, adding nearly 25,000 tourists had also been evacuated from Puri, Ganjam and Balasore districts as a precautionary measure.

The state government had mounted a massive restoration work across 14,835 villages and 46 urban areas ravaged by the storm, affecting 1.08 crore people, Sethi said.

The “extremely-severe” cyclone, one of the “rarest of rare”, unleashed copious rain and windstorms that gusted up to 240 kmph on Friday, blowing away thatched houses and swamping towns and villages, before weakening and entering West Bengal.

Assuring that efforts were on to restore electricity supply in the affected areas, Energy Secretary Hemant Sharma said the power infrastructure was severely damaged in Puri, Khurda, Ganjam, Jagatsinghpur, Kendrapara and Balasore districts during the cyclone.

The SRC said that clearing of roads and power restoration work was in full swing, while 321 mobile medical teams had been deployed with adequate number of doctors.

Prime Minister Narendra Modi is likely to visit Odisha to review the situation. Modi had spoken to Patnaik on Saturday and assured continuous support from the Centre for the rehabilitation work.