Cut Off After Cyclone Amphan, The Sunderbans Losses Are Yet Unknown

With no connectivity to the south Bengal region, situated within 100 kilometres of Kolkata, migrant labourers from the Sundarbans, are still waiting to hear from their families. Villagers repair a bank that was destroyed by sea waves at Bakkhali due to the landing of Cyclone Amphan, near Sunderbans area. Photo: PTI

When Samit Mondal had left for Bengaluru in December last year, from Gosaba in the South 24 Parganas district of West Bengal, he could hardly have imagined what the new year had in store for him.

Samit is one of thousands of migrant labourers who flock out of the Sundarbans – the water-locked deltaic hinterland of the state – these days to cities far off, in search of work.

The cyclone Aila that had struck the region in May 2009, had left them devastated with far reaching consequences, as water entered agricultural fields, increasing the salinity of soil and reducing yields significantly for the next few years.

Besides, the property and cattle loss that Aila had already incurred, villagers had to also pay with their land, as the government planned to erect new and stronger concrete embankments in place of the old traditional mud ones and accordingly acquired land from the villagers.

Even though a compensatory package was promised by the government, not many in the village of Mitra Bari in the  Satjelia island on the edges of the protected forests of the Sundarbans Tiger Reserve, acknowledge receiving any such benefits. The long term effects of the cyclone soon resulted in an increased rate of out-migration from the region due to the dearth of viable livelihood options. According to a recent study carried out by DECMA (Delta Vulnerability and Climate Change: Migration and Adaptation), in the aftermath of Aila, between 2014 and 2018, it was found out that 64% of the migration from the Sundarbans regions happens due to economic distress resulting out of unsustainable agricultural opportunities.

Things, however, had started looking a little better in the last few years, according to Meera Das of the Mitra Bari village.

In the winter of 2019, Meera said, “For a good five to six years after cyclone Aila, nothing would grow in this soil, but villagers in  the Sundarbans are once again going back to growing legumes and vegetables other than the single paddy crop – Aman.”

Thus, as daily wage earning migrant workers like Samit struggled for rations a construction site in Bengaluru during the lockdown, they at least knew that their families and friends in the village could get their fish, rice and vegetables.

People like Samit, living in a foreign city with no work or ration card, knew that they needed to return home soon. But the demand for trains from Bengaluru was huge and Samit could not manage a ticket. Yet Samit knew that with whatever resources he had, he could fend for himself, while his family in Gosaba would be able to manage on their own.

Today, the Sunderbans are much closer to the cities. The periphery of the Kolkata metropolitan area is only 60 kms from the Sundarbans, which not many decades ago almost stood untouched by urban influences. There has been rapid improvement in transportation and communication. Satellite TV and smart phones have bridged the gap that geographical precariousness had created and maintained for so long.

Yet, days have passed since cyclone Amphan and Samit has not been able to contact any of his family members in Gosaba.

He calls me from Bengaluru to find out if I might have news and then almost breaks down to hear that I am in equal darkness.

He tells me how he has gathered from his friends and relatives living in Sandeshkhali in North 24 Pargana district, that villages have been washed off entirely as embankments have collapsed and no one can now differentiate between the village and the river barring the few roofs that still remain.

Amphan, which made landfall on May 20, crossed the Gangetic deltas at a time when rivers were already rising due to high tide, and since it was a couple of days night before the new moon, the surge was even higher. 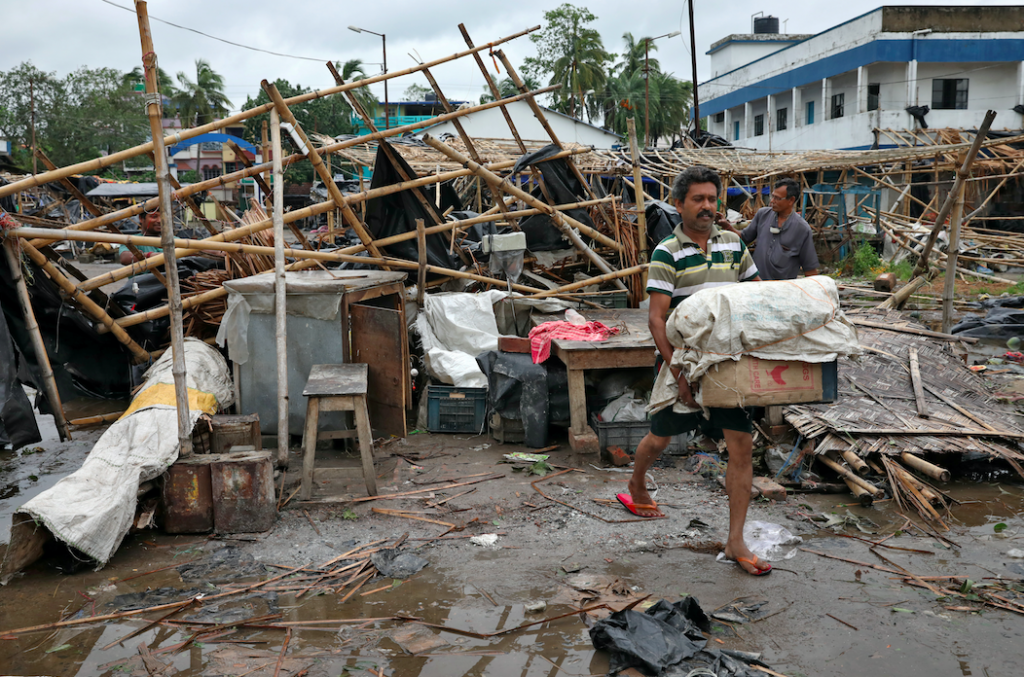 A man salvages his belongings from the rubble of a damaged shop after Cyclone Amphan made its landfall, in South 24 Parganas district in the eastern state of West Bengal, India, May 21, 2020. Photo: Reuters/Rupak De Chowdhuri

With visuals coming in, Samit is waiting impatiently to receive some news. The last he had managed to speak to his brother was before the storm had hit. “My brother had said that if the storm was worse than Aila, he would not be able to save our house,” Samit said.

“I, anyway, do not have money in hand, and with this storm, we will be finished.”

Samit’s house was made of mud and straw, and had a corrugated tin shade. With the storm raging at a speed of 165-180 km per hour, the house, I could guess, would not remain in the best of shape. From the information that I have collected by calling up people connected with the Gosaba town region, parts of the old embankments have collapsed and the new embankments constructed in certain places post-Aila too have caved in.

While no one could confirm news of human loss, it seemed that all river side villages of the Satjelia island were inundated, the effects of which will be felt by the islanders (yet again) for the coming half a decade if not more.

The phones of people in the Sundarbans islands, continues to be unreachable and migrant labourers like Samit – stuck at various parts of the country amidst the pandemic scare and economic insecurity that follows – wait to hear from their villages.

For the cartographers and policy makers, the islands might not be too far from the capital city of Kolkata, yet at this time of calamity and distress, seem very, very far.

Prama Mukhopadhyay is a PhD scholar of sociology at Delhi School of Economics and has done extensive fieldwork in the Sundarbans.