Worrying inaction on establishing a loss and damage facility as promised during the Glasgow COP, say ministers of developing countries. 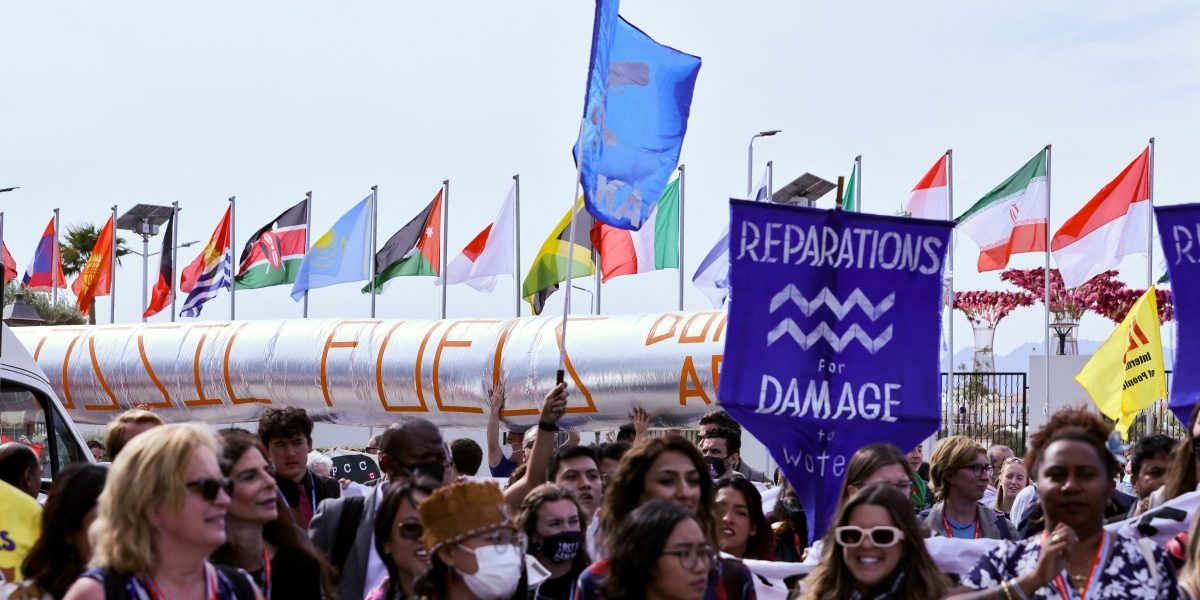 Kochi: As time runs out for critical decisions to be made at the 27th Conference of Parties (COP27), ministers from several developing countries called out the “worrying inaction” on the part of developed countries in establishing a loss and damage fund as promised at last year’s summit.

In an impromptu press conference on November 17 at COP27 in Sharm El-Sheikh, leaders representing the G77 and China, Alliance of Small Island States (AOSIS), Least Developed Countries (LDCs) and Independent Alliance of Latin America and the Caribbean (AILAC) said that developed countries should show the “political will” to deliver on finance for loss and damages caused by the impacts of climate change, which many developing countries are having to face despite not contributing to carbon emissions as much. Despite the late hour, they were ready to sit down and establish a consensus on this to move forward, they said.

A separate fund to meet the losses and damages caused by the impacts of climate change (including extreme weather events such as floods and droughts) in developing countries was – for the first time – included as an agenda item in the COP this year. However, there was worrying inaction on the part of some developed countries to follow this through, said ministers representing several blocs of developing countries.

Pakistan’s federal minister for climate change Sherry Rehman spoke on behalf of the G77 countries and China. India is also part of the G77 bloc, which consists of 134 developing countries.

The recent floods in Pakistan affected 33 million people and broke a century’s record of climate events and caused damages worth $30 billion. Rehman added that the country was facing a climate vulnerability bill that would accrue to $348 billion, as per the World Bank. These are huge sums for countries drowning in debt and climate-driven catastrophes. This is an issue of climate justice because Pakistan’s share of contributing to climate change is less than 1%, she said.

“Vulnerability should not become a death sentence,” said Rehman. She added that 2050 would be too late for many countries, and that climate justice delayed would be climate justice denied. She warned that vulnerable communities in Pakistan and many other countries have no ground to stand on, let alone build on or grow crops on.

Developing countries need “at least a political announcement of intent” that a loss and damage fund will be established, she added: “The time is ticking on this particular COP as well as on the whole of humanity.”

“What went on in Pakistan will not stay in Pakistan… that dystopia that came to our doorstep will come to everyone.”

For rich countries that are anxious about liability, “I think we can work around all those anxieties.” pic.twitter.com/8nyW9JGN7N

All for a consensus

However, developing countries are not pressing to create an “adversarial environment”, because they want to take this forward with “clarity” and “consensus”, Rehman added. There is no intent to corner any particular country. She said that though COP27 should technically be closing today, they were willing to take this forward even at this late hour “because it is of pivotal importance”. The “anxieties” of some countries “worried about liabilities and judicial proceedings” can be worked out, she said.

They are ready to sit down and work it out even in this late hour, reiterated Molwyn Joseph, minister of health, wellness and the environment of the small island state of Antigua and Barbuda, representing the AOSIS on the dais.

“The establishment of a loss and damage fund should not be that difficult,” he said.

Anything less would be a “betrayal”; we cannot afford to miss this opportunity to create a fund for loss and damage, he said. He was “frustrated” that political commitment has not translated into political action to establish the fund.

“Let us not leave COP27 without establishing the loss and damage fund,” he implored.

The other ministers who expressed their concern included Alioune Ndoye, minister of environment, sustainable development and ecological transition of Senegal, who represented the LDCs; and Francisco Javier Canal Alban of Colombia and Malcolm Stufkens of Honduras who represented the AILAC.

However, a walkout of the negotiations by these countries was premature, she said in reply to a question from the media. “We don’t walk out of situations, we work around them…we are waiting for a plan to be operationalised.”