COP25 Diary: Greta Thunberg Has Her Moment in Madrid

"We have been striking for over a year, and basically nothing has happened," she said. 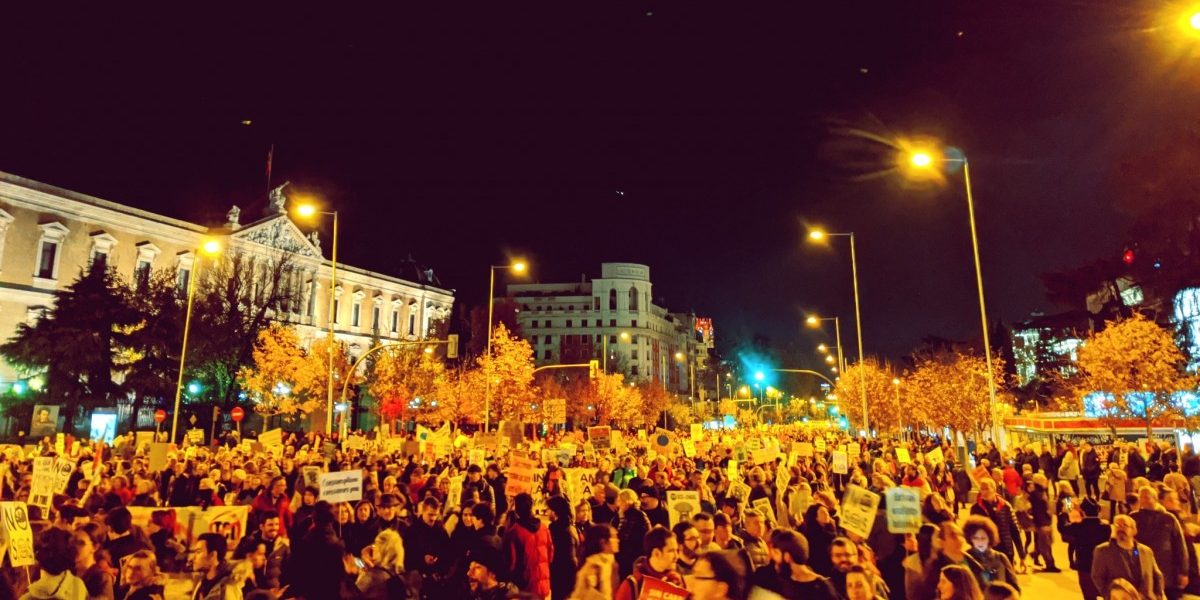 Madrid: WhatsApp groups began buzzing this (December 6) morning. “Greta Thunberg is at the venue,” one journalist informed her comrades. Everyone was unprepared. She had arrived unannounced.

I was in the metro on the way to the venue. When I reached 20 minutes later, I made my way to the hall where the Swedish climate activist was, at least according to the last message on the WhatsApp group. She wasn’t there but the hall felt different from every other day of COP25.

There was something in the air – more energy, perhaps. More smiles. More colour. Fewer suits. The speakers’ voices were more alive, their words more animated.

I spotted a large crowd of people outside circling someone I couldn’t see. It was her. The people outside were standing on chairs and benches with their phones or cameras in hand, stretching to capture a glimpse of the 16-year old who had become, over the last year, a rallying point for the world’s climate movement.

Photo and video journalists had found their vantage spots, as they always do. She began walking towards the other end of the COP25 venue. They continued to find new spots as they trailed her. The less-trained ran into poles, tumbled over chairs as they hustled in one direction while looking in the other, at her.

For a few minutes, India’s eight-year-old climate activist Licypriya Kangujam walked with her. The two were engaged in a brisk conversation. Later, Kangujam tweeted picture of her with Thunberg, one holding up a sign urging Prime Minister Narendra Modi to pass a climate change law in the winter session of India’s parliament.

Nothing more exciting than meeting @GretaThunberg today for the first time. We will be speaking together on 10 December at 1 pm at #COP25 in High Level Session. Indeed a great day about to an end now! This is what we discussed, “Age doesn’t matter to make the difference!” pic.twitter.com/iFVP7PjcVi

The commotion grew in volume as the duo reached the media centre. As Thunberg made her way to the narrow doorway, the crowd around her began to push and shove, and the activist’s security detail finally had to escort her away even as onlookers cried to “leave her alone”.

The press maintained a careful and committed vigil for several hours, waiting for her to arrive and speak.

Thunberg spoke later in the day at a scheduled press conference in the city centre and said the school strikes over the last year have achieved little.

“We have been striking for over a year, and basically nothing has happened,” she said.

Indeed, the rate of greenhouse gas emissions – the primary drivers of climate change – hasn’t declined. They’re all set to hit a new high in 2019.

She pinned the blame on those in power, saying they were ignoring the climate crisis. “We cannot go on like this. It is not a sustainable solution that children skip school.”

Schoolchildren around the world have been skipping school every Friday, under the banner ‘Fridays for Future’, for over a year now to protest global inaction in the face of the climate crisis. The movement took off after Thunberg began her solo Friday strike outside the Swedish parliament in August last year.

This Friday, the world protested climate inaction with coordinated action. Outside Madrid’s Atocha railway station – the largest in the city – the atmosphere was electric moments before the march was to begin.

People from around the city, and some even from outside the country, braved the evening chill to gather with colourful posters, sound systems, acerbic banners, layers of warm clothing and simply lots of energy.

Thunberg had arrived earlier at Atocha in the day on a train from Lisbon, where she had docked after a three-week boat journey across the Atlantic.

She doesn’t fly because of the high carbon-footprint of air travel (Oxford Dictionary noted the use of the Swedish word flygskam, meaning ‘flight shame’, increased 182% in 2019). However, Spanish newspaper El Pais reported that the train she’d travelled in used a diesel engine for a part of the journey, so it wasn’t as environmentally friendly as one of its passengers would’ve liked.

Unfortunately, Thunberg had to pull out from leading the march on the Madrid police’s suggestions, after they noticed she appeared to be overwhelmed by the attention.

But the crowd remained strong, vigorous. The mass of its participants stretched for over a kilometre from Atocha, and the 6-km stretch from Atocha to Nuevos Ministerios in central Madrid had been blocked for vehicular traffic. There was music. 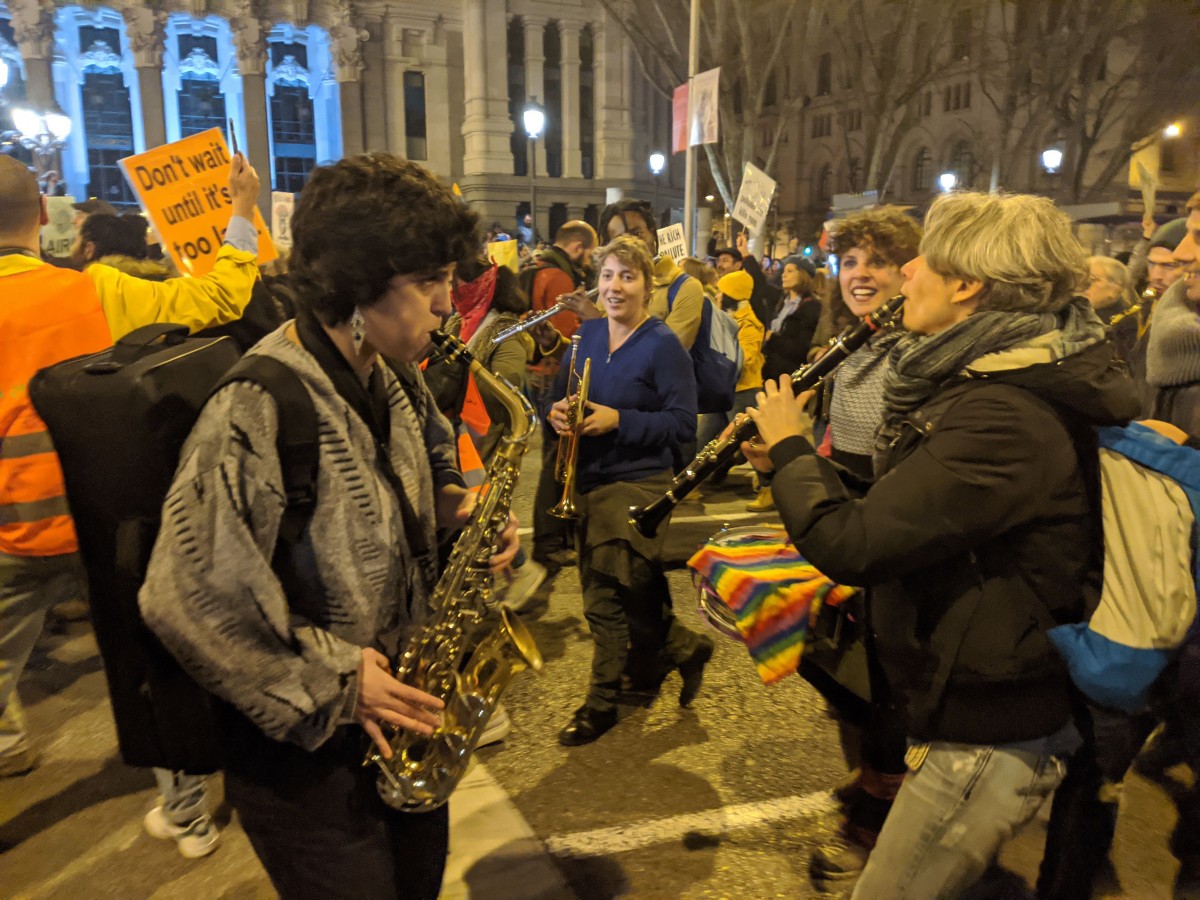 The people of the Extinction Rebellion group were particularly boisterous, understandable since their civil disobedience movement in the developed countries had avalanched into a cross-country and cross-cultural wave of activism involving millions.

Some people were dressed in black and carried posters of skulls. Every few minutes, they’d lie down on the road as part of a rehearsed skit. To the ominous blare of an emergency siren, they’d then get up, huddle together while vigorously tapping their feet, all the time wearing stern expressions. Then they’d rush forward as one. It was a sight to behold.

On one occasion, I was almost knocked out trying to capture a video, saved only by a perfectly timed-tap on the shoulder by a photojournalist.

During a more subdued part of the march, several toddlers – some in prams – also demanded climate action; at least their parents did, as their babies snuggled under multiple layers of wool.

“This is a question of generational equity,” said one parent. “If the world doesn’t act now, what future will my child have?”

“The world is going to warm by 3º by the time my child is 30. There will be frequent droughts and floods. It’s time for world leaders to act,” another said as we walked past the Plaza de Cibeles, one of Madrid’s most prominent squares and also the spot where Real Madrid, the famous football club, celebrates its victories.

At one point, we saw people suspend a big banner from the top of a flyover; it read, “Just 8 years till 1.5º C. HOW DARE YOU?”, combining climate scientists’ forecast that the world will warm by 1.5º C far sooner than expected, although not quite in eight years, and Thunberg’s famous ‘how dare you’ speech at the UN Climate Action Summit in New York this September.

“We want climate action. When do we want it? Now!” a few of the younger marchers shouted as we walked past the banner.

I asked them if they had any specific demands. They did not. “I think it’s not for us to say that. There are more qualified people who know better what needs to be done. It’s up to them. Our job is to put pressure, to not let them breathe easy,” one protestor from Spain said.

About halfway through the march, several marchers (including I) needed urgently needed to relieve themselves. Public toilets aren’t common in Spain, or for that matter in Europe. We were rescued by a well-placed Starbucks.

Shortly after, we could hear a speaker’s voice in the distance. “They have begun speaking. Let’s rush,” a fellow marcher said.

When we reached Nuevos Ministerios, the march’s destination, we found thousands of people had gathered, packed closely together. Organisers estimated around 500,000 people were there.

The actor Javier Bardem was talking in Spanish. The only bit I understood was when he called Donald Trump stupid.

Then, Thunberg took to the podium and greeted everyone in Spanish before switching to English. She was dressed in her characteristic hooded jacket and track pants paired with blue sneakers and carried – like a skateboard – her famous signboard that read, ‘Skolstrejk för klimatet’ (Swedish for ‘school strike for climate’).

“We need to step out of comfort zones like we are doing now. We need to continue telling people in power that they must take their responsibility and protect present and future generations,” she thundered.

She also spoke about the need to keep the people of the ‘global south’ and indigenous communities at the forefront of all climate action because they ‘are suffering the most’.

“We are here today because of COP25, where world leaders are here to negotiate our future. But the hope is not within the walls of COP25,  the hope is out here with you,” she said to loud cheers.

Towards the end, Thunberg said world leaders were “betraying us”. ” We won’t let that happen anymore. Enough now. Change is coming whether you like it or not.”

As the crowd began chanting her name, she quickly slipped off the stage.