COP21 Diary: The United Nations, their Porous Borders and the People in Between

Anjali Vaidya's day-2 dispatch from the COP21 in Paris discovers awareness at the summit of how a changing climate is forcing people to become refugees in their own countries. 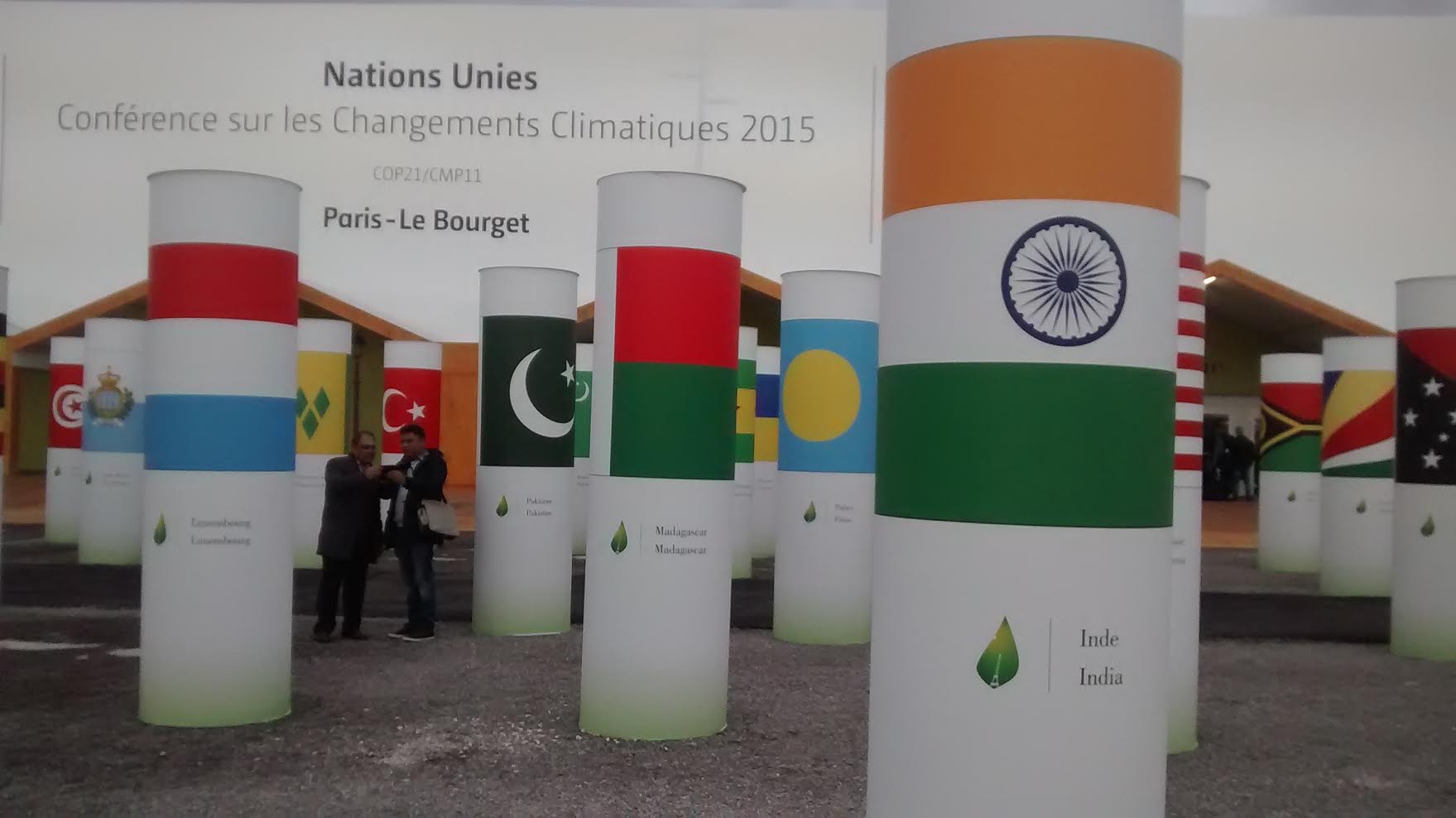 Climate change will be felt more severely by the people forced to slip through the borders between the united nations. Credit: Anjali Vaidya

Outside of the COP21 site at Le Bourget, north of Paris, France, there is a forest of flags from across the world. These flags wrap around tall white columns, with the name of each country in French and English below. The columns rise to one side as one enters the premises, and one must pass between them to exit – Palestine to the right, Japan to the left, India – Bangladesh – and onward. The weekend before the UN climate change conference officially began, many of those who came to register began by seeking out their nation’s flag, and posing for a picture beside it. By today, however, the second day of the negotiations, no one is paying much attention to the flags. Each of the thousands who have come here to observe the negotiations and conduct side events, as civil society or press, arrives in the morning and goes straight for the entrance, people from all nations converging on a door beneath the words Nations Unies.

When a tired phrase shows up in a new language, it can cause you to see it with with fresh eyes. The phrase “United Nations” carries, for English-speakers, seven decades of baggage that clouds the meaning of the words themselves. But rewritten as Nations Unies – Nations United – forces one to stop and think about the strange, rather radical concept that those words signify. To be a nation, after all, is to be surrounded by borders, limiting identity and mobility alike. To be united requires that to whatever small extent, we let those borders down.

Many things unite the people at COP21 across borders, most prominent among them – of course – a common concern about climate change. There is also unity at the conference in other, less vital areas, such as the common daily struggle (for those not from the large Francophone contingent) to piece together enough bad French to acquire one more croissant avec le café, s’il vous plaît. Borders break down everywhere one looks: NGOs from different sides of the globe sharing booths in the large and vibrant building for observers from civil society, and media from across the world sharing sleeping space on the thoughtfully placed couches in the media centre.

But not all boundaries are quite so porous. Questions of borders and border-crossing are in the air at this conference, not least because climate change is likely to have little respect for them. On the civil society side of the conference, away from the official negotiations, many discussions are scheduled this week on the subject of climate change and human migration. This morning, it was a group of European and American social scientists who discussed the topic, reporting on the findings of a four year collaborative study. One commonly raised issue between the seven speakers was that right now, we lack the appropriate legal language to speak about climate refugees, who do not count as political refugees and thus slip through the cracks. Can policies emerging from the COP21 agreement help? Koko Warner of the United Nations University opined that they can and should. “This legally binding document will set the trajectory of our ambitions and our actions, both internationally and nationally,” she said, and thus needs to have human migration in the text.

But the speakers emphasised that migration is not just a matter for policy. Angela Oels at Lund University questioned the term “climate refugee” itself, which she says moves the conversation away from the root problem of greenhouse gases. The residents of island nations have no desire to leave and turn into refugees. “If they want anything, they want industrialised nations to stop their emissions,” says Oels.

She suggests an alternative term: “climate warrior” – which some Pacific islanders have adopted for themselves in their fight to be heard on the global stage. Vulnerable individuals, Oels says, are still capable of resistance and turning the world their way.

There are more than a few climate warriors at this conference. At a panel discussion in the afternoon on how to build climate resilience in South Asia through local efforts, one speaker who stood out from the crowd came to the podium and spoke with energy and confidence, entirely in Kannada. The speaker’s name was Mansoor, a scrap dealer from Bengaluru who has come all the way to COP21 in a joint delegation between the Indian Youth Climate Network (IYCN) and the Alliance of Indian Waste Pickers. Mansoor runs a dry waste collection centre in Jayanagar in Bengaluru, along with his brother Fayaz, and is head of an association of scrap dealers called the “Clean City Recycler’s Association.” And why is he here? Because across India, the alternative to recycling is often to burn waste, a practice that releases greenhouse gases into the atmosphere. Mansoor has come here to argue for the importance of proper waste management in our fight against climate change.

After the panel, Mansoor shared his story. His father was a scrap dealer before him. Mansoor has grown up with the business, but his understanding of the wider repercussions of waste management developed after receiving training from and becoming a member of a waste workers association called Hasiru Dala. Today, through Hasiru Dala, he works to raise awareness about waste segregation among his clients and also towards “complete waste management” in his centre’s practice – something that the overflowing city of Bengaluru sorely needs.

An excerpt of Mansoor’s words have been translated below from Hindi, with the aid of Kabir Arora of IYCN and Gaurav Mendiratta.

What challenges do you face in your work, and teaching people to recycle?

Our job is not just to accept dry waste, but to give people complete waste management. We separate wet waste, dry waste and sanitary waste. We compost the organic waste. But if you tell people to give you “dry” waste they just give you plastic trash like plastic packets which is useless. Along with that they should also give us magazines and newspapers [whose recycling gives a profit, and can sustain the business]. But we are happy to take all waste, from A to Z.

What are your impressions of COP21? What do you hope will come of it?

Thirty years ago, my father started doing dry waste work. All the while when I was working, until I reached Hasiru Dala, I knew nothing about the environment. I only knew about earning enough for each meal. After joining Hasiru Dala, little by little I started thinking I was doing something for the city.

Now, climate change – it requires some extra attention, some study. Twenty-five to thirty years ago, maybe everything about climate change was known, but the people of the world did not know.

Technology has improved. We can change many things with it. From now on, if we have the ability to stop climate change and save the environment, we should try. If people start giving their attention, if people change, we can stop climate change.

How do you spread awareness about the environment?

I’ll tell you. You know in Bengaluru, how dirty we make the city. That does not mean people are not intelligent. We just have to explain to them a little. Put messages up on boards, print pamphlets, whatever we can do. We can try something new.