COP21 Diary: The Thrill and the Challenge of Collective Action 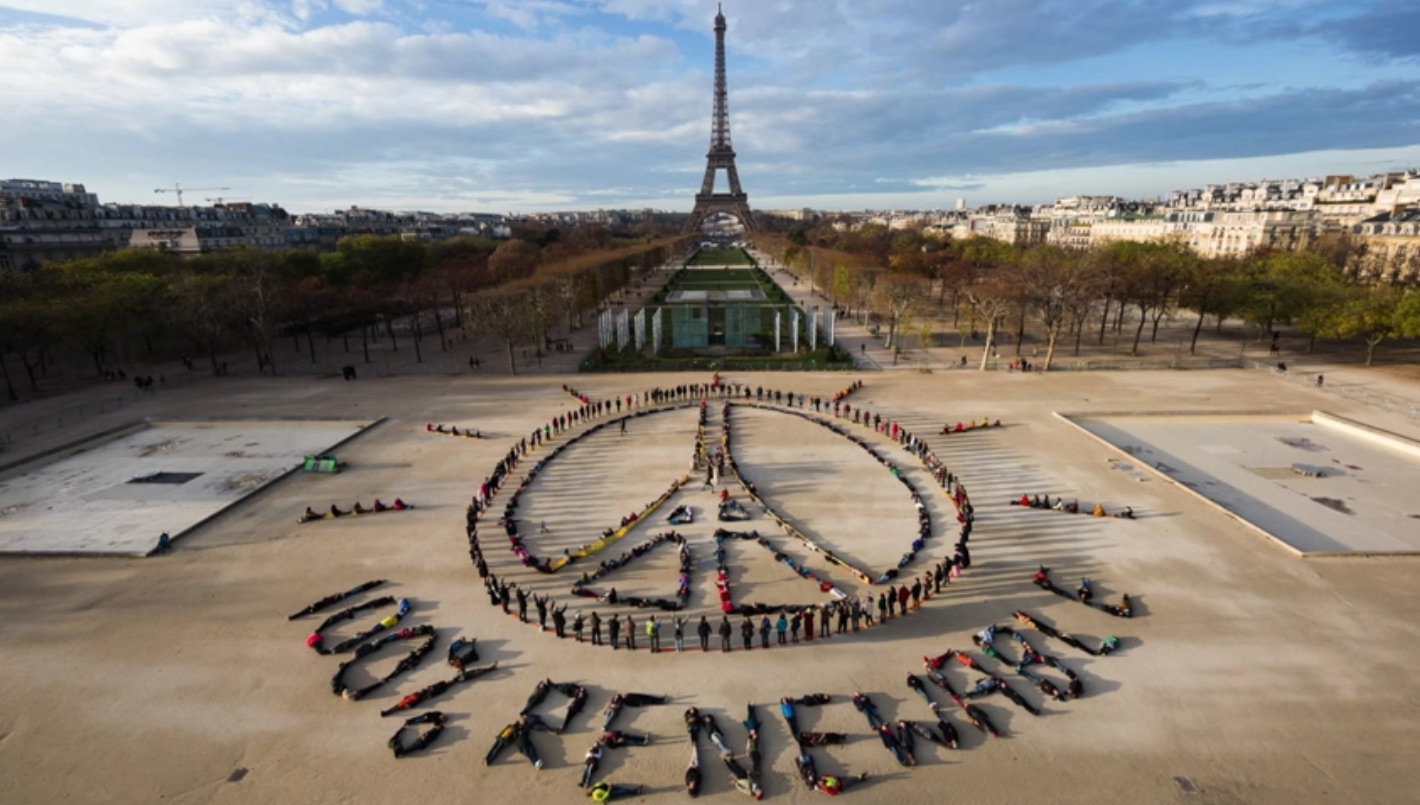 Paris: I am lying on the ground with my face turned to the Eiffel Tower, which rises perhaps half a kilometre away into an improbably beautiful sky. I have to be careful about shifting my feet and my head so I don’t hit the individuals at either end: together, we form the top half of the letter B in the phrase “100% Renewable.” At this juncture, however, I am not yet certain what we all spell, and I speculate without success while we wait for Yann Arthus-Bertrand to finish photographing us and the Eiffel Tower and the human peace sign in between. The woman at my head is playing with a green ribbon that says “J’aimerai garder la Terre”: I would like to protect the Earth. My limbs are beginning to grow stiff from the cold as I watch her ribbon against the cloudy sky and consider, for perhaps the hundredth time in a week, that this is an awfully strange way to see Paris for the first time.

For the past three weeks, France has been in a state of emergency. That means that on Sunday, this piece of protest art on the Champs de Mars beside the Eiffel Tower very nearly did not happen. The police gave the go ahead only 36 hours before the event (a go ahead that both planned climate marches were denied), at which point the organisers (Dancing Without Borders and Spectral Q) had little time left to publicise. Human aerial art requires a large crowd in order to work, so this again might have effectively killed the event. Late Saturday night, the organisers were to be seen passing out hastily printed posters at likely venues in Paris, begging everyone to bring a friend or twenty in the hopes that enough people would come.

One such venue was Le Trianon, an old Phantom-of-the-Opera-style theatre in Montmartre which played host on Friday and Saturday nights to an eclectic group of performances to benefit the climate activist organisation 350.org: talks by environmental activists on the one hand, and songs by musicians like Thom Yorke, Patti Smith and Red Hot Chilli Pepper’s Flea on the other. The theatre was full to capacity both nights in a row, individuals overflowing to the side once chairs filled at the bottom, and then rising into tiered balconies up above. I’m sure I wasn’t the only one preoccupied with the fragile joy of the crowd that night, only three weeks since a theatre like this was attacked.

“It’s an important reminder that while this city is still grieving, and in pain – and we stand with you in your grief – there are those using that crisis to push so many other crises off the table,” said author and activist Naomi Klein at Le Trianon. She spoke of a piece of graffiti above the Seine that said (in French) “A state of emergency to ensure that other emergencies are forgotten.” Klein is one of many that has criticised the French police in the last week for quelling parts of the climate activist movement using emergency laws. She advertised on Saturday for the climate civil disobedience being planned as negotiators wrap up on December 12th.

Klein has recently risen to prominence in the climate activist movement with the release of her book and documentary This Changes Everything, which places the blame for climate change on the shoulders of the inequality at the heart of capitalism. She spoke on Saturday of her own discontent with how the negotiations at COP21 are going: with the offers on the table still adding up to a global temperature rise of a catastrophic 3 – 4oC, the radical changes that we need don’t seem to be showing up. I am considering this on Sunday, lying on the cold ground and watching the movement of clouds, part of an installation of hundreds of people that spell out a message of peace and the need for a shift to renewable energy. Except that the aerial art project and my decision to come for it were so last minute that I do not, in actual fact, have much idea what message we are spelling out for the sky. Questions directed at the other sides of the B, to my head and feet, reveals that others are not quite sure either – something to do with climate justice, most certainly. Somewhere at the centre of the circle between me and the Eiffel Tower, there are chants which we are encouraged to join in with, but I cannot make out any words. Between “takes,” an organizer gets on a microphone begging us all to maintain position just a little bit longer, to stay still, just where we are. “It looks beautiful,” he assures us. I watch Yann Arthus-Bertrand up in his crane, and try to imagine what he sees.

The process feels like a small-scale version of what I have witnessed at COP21 all this last week, albeit with smaller stakes. Humans are just so difficult to coordinate. We each have our own minds, our own quirks and grievances and desires in life, and have to fight from moment to moment to see a bigger picture. Go too far beyond nearest neighbours and the world becomes hazy, inscrutable to even the best of us – as much a foreign country as the future and the past. Fighting climate change effectively will require much more tightly coordinated and collaborative behaviour than our beautiful, fragile, bickering species has ever displayed at any point in the past. There is nothing at all surprising in the fact that we’re having trouble with it.

What surprises me is that unlike Naomi Klein, I am going into the next week at COP21 with more hope than I had week before last. It’s true that the biggest issues last week are still the biggest issues this week, with the draft agreement submitted on December 6 still filled with brackets (each bracket a point that no one wants to back down on yet). “Key outstanding issues are finance and differentiation, and they really need minister level engagement which will start as of Monday,” explained Ria Voorhaar of Climate Action Network after the final draft submission on Saturday.

Finance and differentiation are far from small issues, having both been contentious for two decades – who will pay what to whom for climate change action, both adaptation and mitigation? And how will historical responsibility and level of economic development be taken into account?

“We hope for early signals from the ministers that they are ready to find agreement,” said Voorhaar. Ministers arrive on Monday, December 7, and there is always a chance that no acceptable agreement will be reached. In twenty years of talks, the world has had the chance to fracture into factions on the subject of climate change.

But in twenty years of talks, there has not been the confluence of factors that I am seeing here today: near-universal acceptance that anthropogenic climate change is happening, technological capacity to do something about it, and a massive push from civil society converged on Paris for their governments to act. If sufficient change doesn’t happen in the negotiating halls, it can still come.