COP21 Diary: Climate Science is Ahead of Policy But, Thankfully, the Fear is Behind

That climate scientists are at COP21, broadcasting their work to the public and policymakers, shows that they've decided the risk of not being heard in the debate outweighs the risk of being misunderstood. 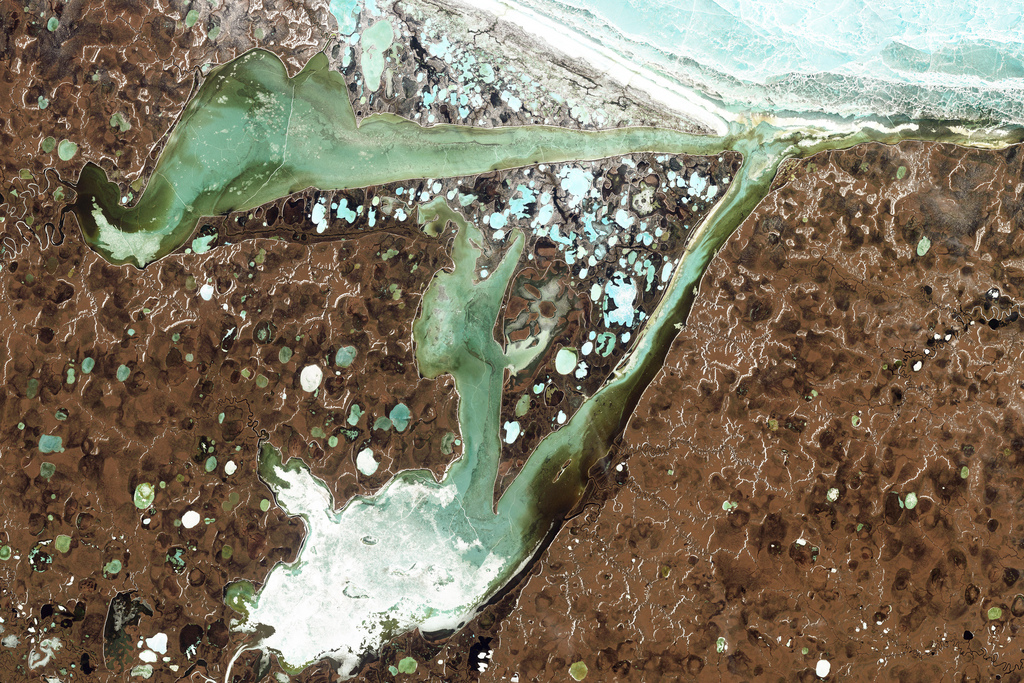 Omulyakhskaya and Khromskaya Bays lie along the northern Siberian coast, southeast of the Lyakhov Islands. The northerly location almost guarantees ice in the adjacent East Siberian Sea, and permafrost blankets the land around the bays. Caption and credit: Landsat, GSFC/Flickr, CC BY 2.0

Paris: All the way across Northern Eurasia and the Northern reaches of the Americas, groves of trees have started to take on an odd appearance. Their trunks are bent at harsh angles, as if strained against the wind. In truth, it is the ground itself that has begun to buckle and sink, a major problem for local communities and wildlife. Roads break, houses must be abandoned to the shifting earth, lakes appear where there were none before.

These outlandish events have a rather simple – if chilling – explanation: from Siberia to Canada, the permafrost is beginning to thaw. This event has the potential to release large volumes of greenhouse gases into the atmosphere, speeding the progress of climate change well beyond what most current models predict.

“The Arctic has been for all this time a carbon sink,” explained Susan Natali of the Woods Hole Research Institute on Wednesday morning. During a panel at COP21 on permanent effects climate change might have on earth systems, Natali outlined in careful, concise detail the science of potential catastrophe. Permafrost occurs at latitudes (or altitudes) where summer temperatures only thaw a thin surface layer of soil. The layer beneath is called permafrost if it remains frozen for at least two years at a time. When thawed, the organic matter contained within that perennially frozen soil is decomposed by microbes, which in turn will release CO2 and methane into the atmosphere.

This sounds on the surface not too different from other processes occurring around the world – just one more greenhouse gas emitter to add to the equations – until one notes how vast the permafrost is. Permafrost comprises 24% of the northern hemisphere’s land area, and our best guess is that it contains 1.5 trillion tonnes of carbon. This is based on incomplete sampling, said Natali, so actual numbers may be higher. To give an idea of relative scale, 1.5 trillion, or 1,500 gigatons, of carbon is twice that now contained in the atmosphere, three times as much as the world’s forests, and exceeds that in our remaining fossil fuel reserves. How much is likely to thaw depends on how much we emit: the most optimistic emissions scenarios have us on track to thawing 30% by the end of the century. The highest have it at 70%. Once thaw begins, however, it feeds back upon and amplifies itself. Greenhouse gas release increases temperatures, which in turn causes more permafrost to thaw, which in turn accelerates greenhouse gas release.

The potential for permafrost thaw to have a large accelerating effect on climate change has been known for years. However, Natali revealed that even the latest IPCC (International Panel on Climate Change) report does not factor permafrost thaw into its models. Thus, Natali explained, all of the official estimates being floated at COP21 about carbon budgets and how much we can afford to still emit, given 1.5 ºC or 2 ºC limits, are completely off. In piechart after careful piechart she recalculated the estimates, showing a spellbound, rather stunned audience that we have even less time to wean ourselves off of fossil fuels than the debates between negotiators at this conference would suggest.

After Natali’s presentation, I found that I had reached my own tipping point. I had to leave the room and come back again before hearing the next speaker elaborate about the future disappearance of Arctic summer sea ice (the good news: if we can stay below a 1.5 ºC rise in temperature, that ice has a decent chance at survival. The bad news: that temperature goal remains a big “if.”). One can only deal with so much information about potential impending catastrophe in one go.

And that, perhaps, is the whole problem. The science of climate change has been clear since the 1980s, but political action and public outcry have lagged far behind – in part because the science is, frankly, scary. If it were not scary, there would not be 40,000 people in Le Bourget right now and perhaps thousands more converged on Paris in less official capacities, drinking coffee after coffee as they try to find ways to set the planet on a better course. Fear about climate change is normal, but also counter-productive if it becomes paralysing. Very ordinary fears about the civilisational changes that lie for certain before us, whether we combat climate change or succumb to it, are part of what has stalled action for all these years.

Thus I left for a breather after Natali’s talk, but I also came back, and appreciated on my return that Dirk Notz of the Max Planck Institute for Meteorology was trying to assure the mildly overwhelmed audience (having learned about Antarctic ice sheet instability, glacier loss and permafrost thaw in the past hour) that media reports of a possible “death spiral” in the Arctic sea ice had been greatly exaggerated. It seemed as if he mostly opposed the alarmist terminology, however: in his figures, Arctic ice still showed a sharp and certain decline in the coming decades, if we do not drastically curb our emissions.

In one figure, an almost precisely linear relationship between net ice decline and atmospheric CO2 levels. In Notz’s stress on the beauty that the relationship was linear, I could see the disconnect between the academic and the audience. The audience likely only saw that ice continues to plunge. But for Notz, to find a linear relationship in his data must have seemed nothing short of god-sent. At last, I imagine him thinking. A nice, straightforward correlation that people will understand.

Communicating climate science is hard. It’s hard not just because of the fear and denial that it inspires – neither of which have been minor obstacles over the years. And it’s not just that the details are complicated, which they certainly are. Academic language itself has issues delivering the kinds of answers a confused and frightened public might want, given a topic with the wide ranging social, economic and political implications of climate change. Probability distributions will not always translate easily into policy decisions, and neither do non-linear relationships make good soundbites.

“As a scientist you want to give all the caveats,” explained Natali. “If I talk to people the way that I would write a paper, no one’s going to listen to me.” And there is also the problem of how to give policy makers and the public an accurate portrait of a situation when definite numbers aren’t available. “Sometimes information is just not there yet, and that’s hard,” she said. “You take a risk if you give a number that’s too low then it won’t be paid attention to.”

Anders Levermann, who studies Antarctic ice sheet dynamics at Potsdam University, also said that the kind of information available to climate scientists isn’t always the kind that people need. “Small scale, high impact events can be more important than large scale changes, and we’re currently best at predicting the large scale changes,” he said. “It’s difficult to convey that there’s some things that we know for sure and others that we don’t, all without being alarmist.”

But the fact that they are here at COP21, broadcasting their work to the public and policy makers, shows that these scientists have decided that the risk of not being heard in the debate outweighs the risk of being misunderstood. And Joseph Alcamo, UNFCCC Special Science Advisor, said that policy makers at all levels are finally listening. “I would say it’s a dangerous time,” he said. “We are, the reality is, in transition to an entirely new climate. It is more important than ever that scientists find a way to convey their results in a timely way to policy makers.”

Elsewhere at COP21, negotiators finally came out with one more draft text on Wednesday afternoon – with the suggestions of civil society (scientists included) continuing to find voice in the teasing out of language surrounding a possible 1.5 ºC or 1.5 ºC – 2 ºC goal, elsewhere lost with the demotion of gender equality and indigenous peoples rights to the preamble. Meanwhile, nations still debate about who will contribute how much to finance climate change adaptation and mitigation. So it continues, with the science spiralling out into political ramifications in incremental steps.