COP21: Camps Agree on 'Well Below 2 ºC' But Claw At Everything Else

The trouble is, although the Paris agreement is going to be more than we had before, that isn't saying much: we still have to make up for decades of relative inaction now. 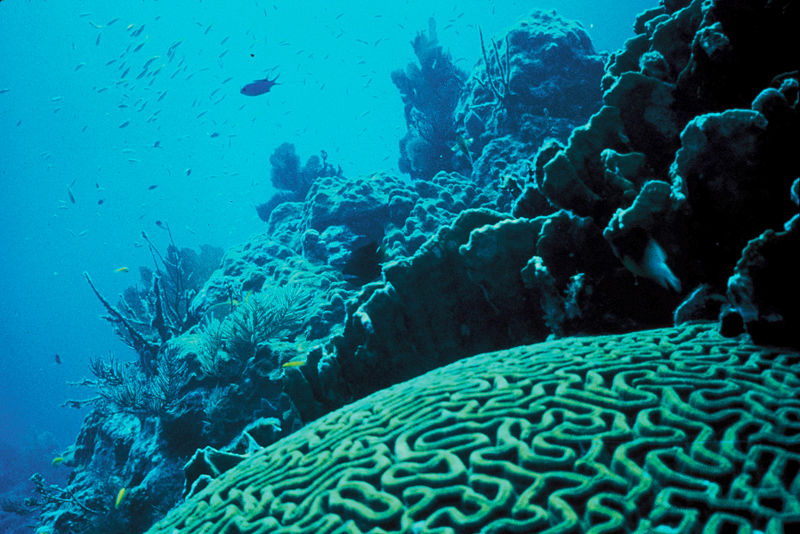 Corals off the coast of Florida. Warming and acidifying oceans could severely endanger these beautiful but localised ecosystems. Credit: eutrophication&hypoxia/Flickr, CC BY 2.0

Paris: On Thursday afternoon at COP21, a gigantic sphere covered with a projection of the Earth drew wondering crowds in the United States pavilion. Alexander MacDonald, director of the NOAA Earth System Research Laboratory in Boulder, Colorado used his handheld control for “Science on a Sphere” to switch between projections of ocean acidification across time, weather patterns, temperature levels, salinity, aerosol accumulation. He rotated the sphere to show us warming waters by Antarctica. He showed us the sulphates released into the atmosphere by a volcano near Madagascar in 2007, and my eyes wandered across to the sulphate plume above India. With a swipe of his finger across the 20th and 21st century, MacDonald showed the oceans acidify to the extent that shellfish and corals dissolve.

We speak about the Earth as a heavily interconnected system, but the globe in front of me was a visceral representation of that fact. Aerosols wandered in the air across the Atlantic and the Pacific. The swirling waters on this blue planet rose and fell in temperature with a swipe of MacDonald’s finger across time. “We are all passengers of a craft that we are not taking care of,” said Monique Barbut, Executive Secretary of the UN Convention to Combat Desertification, on Thursday. Hanging before me, I wondered at what a small and fragile craft it really is.

Almost two hundred nations from across the world are close to having a climate agreement ready in Paris, with the final version due out on Saturday (one day late). In the agreement, brackets have been trimmed back to reveal patch-worked language and trails of caveats, each one a mute tribute to heated debates. Some days ago, it occurred to me that an agreement between conflicting nations could be compared to a meal prepared by a committee. The measurement of each ingredient depends not on what the final outcome needs to be (which the science makes amply clear), but on where the middle ground lies between disputing parties. No surprise, then, that right now the flavour is a bit questionable. Indeed, each person that I’ve asked for responses to the penultimate drafts has given a look like they just swallowed something sour.

First, the good news. What is being pushed right now is an international agreement that will be legally binding (with significant disputing voices about whether it will be legally binding internationally or domestically) and that weans the world off of fossil fuels, to be replaced by renewables over the course of this century. The aim now is to keep global temperature rise “well below” 2 ºC, ideally no higher than 1.5 ºC. The draft outlines a review process to keep countries accountable, while accepting that economic differences and therefore differences in responsibilities need to be taken into account (this latter point is what India along with China, Brazil and South Africa have been pushing hard for). It also accepts (although this section remains contentious) the human cost of climate change, that vulnerable nations already need help, and that the world needs to share the costs of helping them.

These points are not insignificant. Not long ago at all, the very idea that we need to move toward a fossil-fuel-free civilisation this century would have seemed radical. Here in Paris there is nothing radical about it, accepted as fact by everyone from politicians to civil society leaders to corporates. COP21 has sent a clear political signal for investors to go fossil-fuel-free, said Nicholas Stern of the London School of Economics early Friday morning. “Those making investments now can be more confident that making those low-carbon will be profitable and making them high-carbon carries high risk,” he said.

And the fact that 1.5 ºC is there in the text, along with (still debated) provisions for loss and damage to help impacted states, is a major success for the very vocal contingent from climate vulnerable nations. A press release from the Secretariat of the Pacific Regional Environment Programme on Thursday evening said that aides to Pacific ministers have cited “enormous” pressure from “bigger and wealthier countries” to drop their demands, but clearly these negotiators did not give in.

The trouble is, although the Paris agreement is going to be more than we had before, that isn’t saying much. We have to make up for decades of relative inaction here. And a patched together agreement that looked more towards political compromise than the scientific red lines in our future was never going to be enough. Thus, among the many problems that remain, the principal one is that the individual commitments of nations are still far from sufficient to keep global temperatures from crossing 2 ºC (let alone 1.5 ºC), which is a point of potential global catastrophe that was never really up for political debate.

Debates continue – they will continue through the day and night until Saturday in Paris, and they will continue after as well. Plans are on the table to have mechanisms to encourage nations to increase their commitments in the future as the potential of renewable energy increases and its costs go down.

In the meantime, civil society at COP21 is filled with its own plans. On Saturday, a massive act of civil disobedience is being planned – quite openly – in the centre of Paris, where all such gatherings have been banned. “Paris has never been an end point for us, but a chance to get an agreement that will help us continue with our fight for climate justice,” said Payal Parekh, with climate activist organization 350.org, on Thursday. “If they won’t keep fossil fuels in the ground, we will. Our communities, our climate, our survival: those are our red lines, and we’re mobilising to defend them.”

Parekh explained to me that there will be three elements to the peaceful gathering: participants will lay out 5,000 red tulips to remember those who have and will lose their lives to climate change, they will spread a 100-metre-long red banner on the ground to represent the emissions line we cannot cross, and they will each renew commitments to fight the fossil fuel industry.

For meaningful change to happen, however, Parekh was careful to emphasise that we need to engage both at the level of talking to policy makers and exerting pressure from the streets. “We need many strategies for change,” she said. “If we think about how we got independence in India, Gandhiji and Nehru and others were also talking to the British. While they were lobbying, they were also doing [nonviolent protest through] satyagraha. We need all levels,” she said.