COP21 Diary: As Talks Go On Behind Closed Doors, Scientists and Activists Fret Outside

Anjali Vaidya reports from Paris on Day 4 of the UN climate change conference. 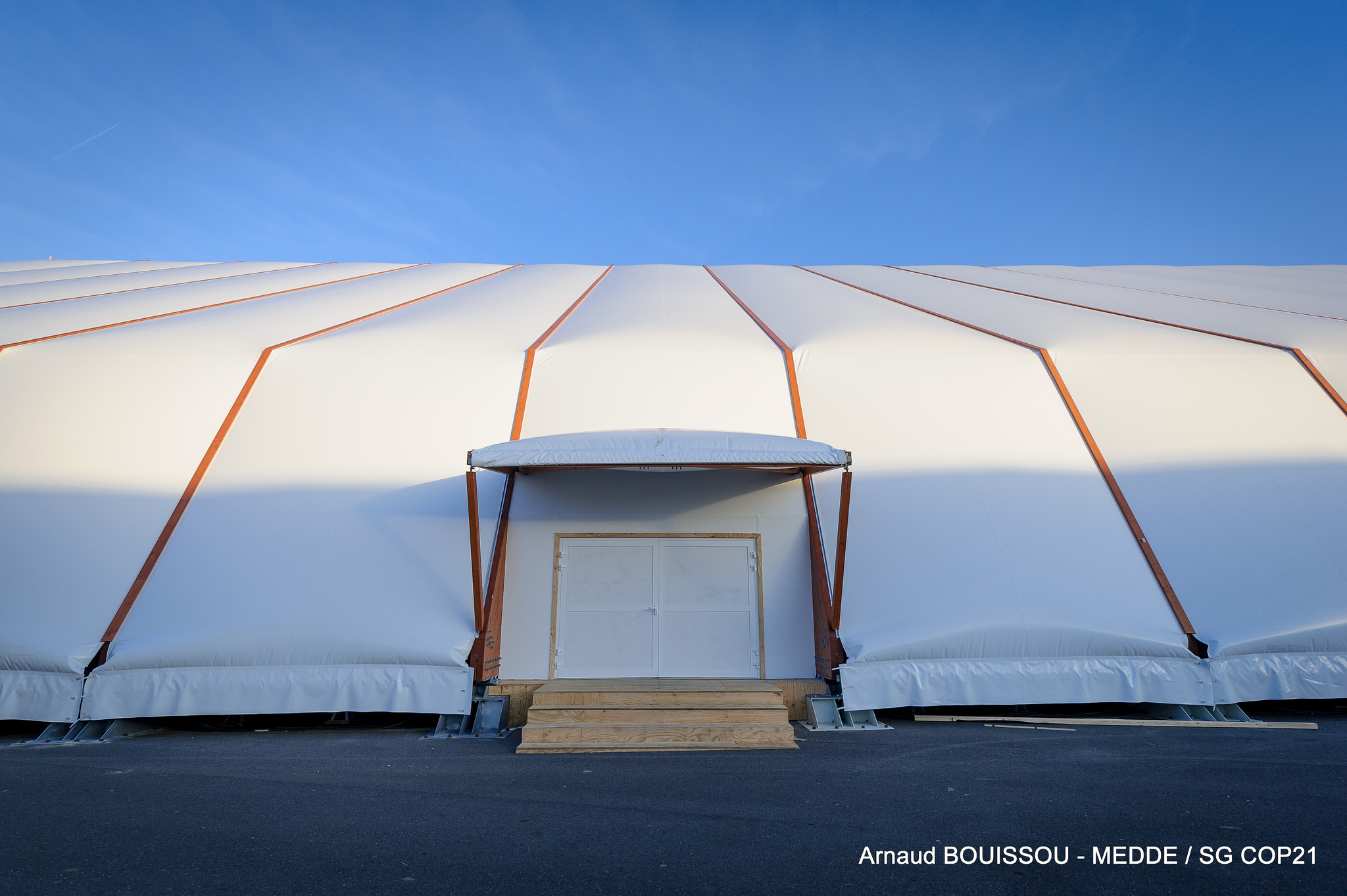 The 'Seine' plenary hall at the COP21 venue at Le Bourguet. Credit: UNFCCC

Paris: Climate scientist and activist James Hansen was once reluctant to tell his grandchildren about climate change. It could wait until they were older, he thought – until they could handle the knowledge that their future might be stolen from them, and act on that knowledge. Hansen’s 17-year old granddaughter is doing precisely that today, as one of 21 “youth plaintiffs” on a federal lawsuit filed in August 2015 that argues the United States government violated the constitutional rights of the younger generation through its decades-old inaction on climate change.

Before COP21, Hansen has never attended the UN’s signature climate change conference – despite having been one of the first scientists to bring the public’s attention to climate change back in the 1980s and a vocal (as well as controversial) climate activist ever since. He believes that fossil fuels must be phased out on a much more rapid timeline than what’s on the table in Paris, and has come to COP21 with suggestions for how to do that. On Wednesday Hansen suggested a “carbon fee,” for example, that puts a price on fossil fuels that takes their environmental impact into effect. He also teamed up with three other prominent climate scientists on Thursday afternoon – Tom Wigley, Kerry Emanuel and Ken Caldeira – to argue that nuclear energy needs to be kept on the table with solar and wind right now, just so that our break from fossil fuels can occur faster. Solar and wind are limited by our lack of effective storage technology, and although such technology may be just a few years off, all four said that those are years we cannot afford to waste.

Hansen’s voice softened when he spoke before the gathering on Thursday about his grandchildren. He did not want to tell these children about climate change, so he told them about the natural world instead. Together they planted milkweed to draw butterflies. And then one day his grandson stayed up past his bedtime, and overheard his grandfather speaking about climate change and the effects it might have on the world. Hansen did not realize the young boy was there until he saw him at the back of the room, tears pouring down his face. A giant pair of shoes hangs from a fountain at the Place de la Republique in symbolic protest at the ban on public protests in Paris during the ongoing climate change conference. Credit: Duc/Flickr

“Our parents did not know that they were causing a problem for future generations by burning fossil fuels,” said Hansen. “We can only pretend that we don’t know.” Climate change is an injustice, he said, that we in the present visit on the young generation of this planet, and on all of those not yet born.

The irony is that those who will feel the effects of climate change most severely are also the least likely to have been responsible for it, or to have a voice to effect change. The problem of agency – of who has a voice, who has power to alter the world’s course, and who does not – is a common debate here. As those on the press and civil society side at Le Bourget follow rumours about what could be happening in the many closed-door side meetings of the negotiations (will we reach a 1.5oC limit in the draft agreement, respecting the wishes of island nations, or a 2oC limit? Will the rights of indigenous peoples be emphasised as important in the purpose section of the draft – will the health of ecosystems?), I am reminded of a story told to me by Filipina poet Eunice Andrada. She and others coming as observers to COP21 from small island nations had ritually passed a stone, hand to hand – from one individual to the next – until it reached a representative who had agreed to carry it into the negotiations. There in the stone, passing behind closed doors, lay their voice.

“We can’t solve a problem by using the same thinking that created it,” said Joseph Robertson of the Citizens’ Climate Lobby on Thursday evening, during a panel discussion on how to facilitate youth action in climate change. “How do you know if what you’re doing is legitimate, when you’re not talking to the people that you’re doing it for?” he said. The panel included two winners of the “Global Challenges Youth Music Contest,” 15-year-old American eco hip-hop artist Xiuhtezcatl Martinez and 18-year-old Indonesian environmental activist and musician Adeline Tiffanie Suwana, both of whom spoke of how to include young people in dialogues about the environment by engaging them with art.

Suwana shared her brief thoughts with The Wire on Thursday evening – on COP21, her love for music and physics, and the environmental youth association Sahabat Alam that she started at the age of 12, mobilising children to plant mangrove trees to reduce flood risk near her home in Indonesia. Excerpts:

What is your story? How did you come to be here? My name is Adeline Tiffanie Suwana, and I’m from Indonesia. Back in Indonesia I’m from a youth association called Sahabat Alam, where we focus on real actions against climate change. We do environmental activities that focus on turning what we understand, and what we can afford, into what we can do – such as planting trees, recycling garbage. One of my favourite personal projects consists of physics and math. We created a turbine to convert water energy into electricity.

Different youths have different focuses. Myself, I love math and physics more. But I also love my music, and I also like playing guitar and singing. And I find a lot of youths also find passion inside of music. We found a platform in music to be able to share our message about doing good for the environment.

Why turn to art to communicate about climate change?

I think that art is very dynamic, it’s very abstract. In terms of climate change, art is also very visible – anyone can connect with art. Even if art comes from Germany it can reach Indonesia, or Vietnam. I think that’s the beauty of art. It’s open to all. I think it’s an excellent platform to spread the message and also represent youth in the fight against climate change.

What do you hope for from COP21?

I hope for a stronger, positive role from the government against the climate crisis, as we’ve seen that the current system might not be that efficient and effective, or sustainable for the environment. If we can create a better policy, it’s good. But I truly do understand that it’s very difficult to reach a consensus and decide what to sacrifice to create a more sustainable platform, since they need more funding or resources to be able to execute that.

I think the awareness for the environment is really quite high. I just hope [that awareness] reaches the policy makers.

If you could say something directly to youth in India from Indonesia, what would you say?

Know what you want to do, know what you can do, and know where you need to learn more – but don’t forget [to act] for the benefit of the environment. I sincerely believe that if we don’t act now, it’s going to be too late to fight against climate change.