COP21 Diary: A Ray of Sunshine, a Song of Despair

Anjali Vaidya from Paris on the opening day of the international climate change conference. 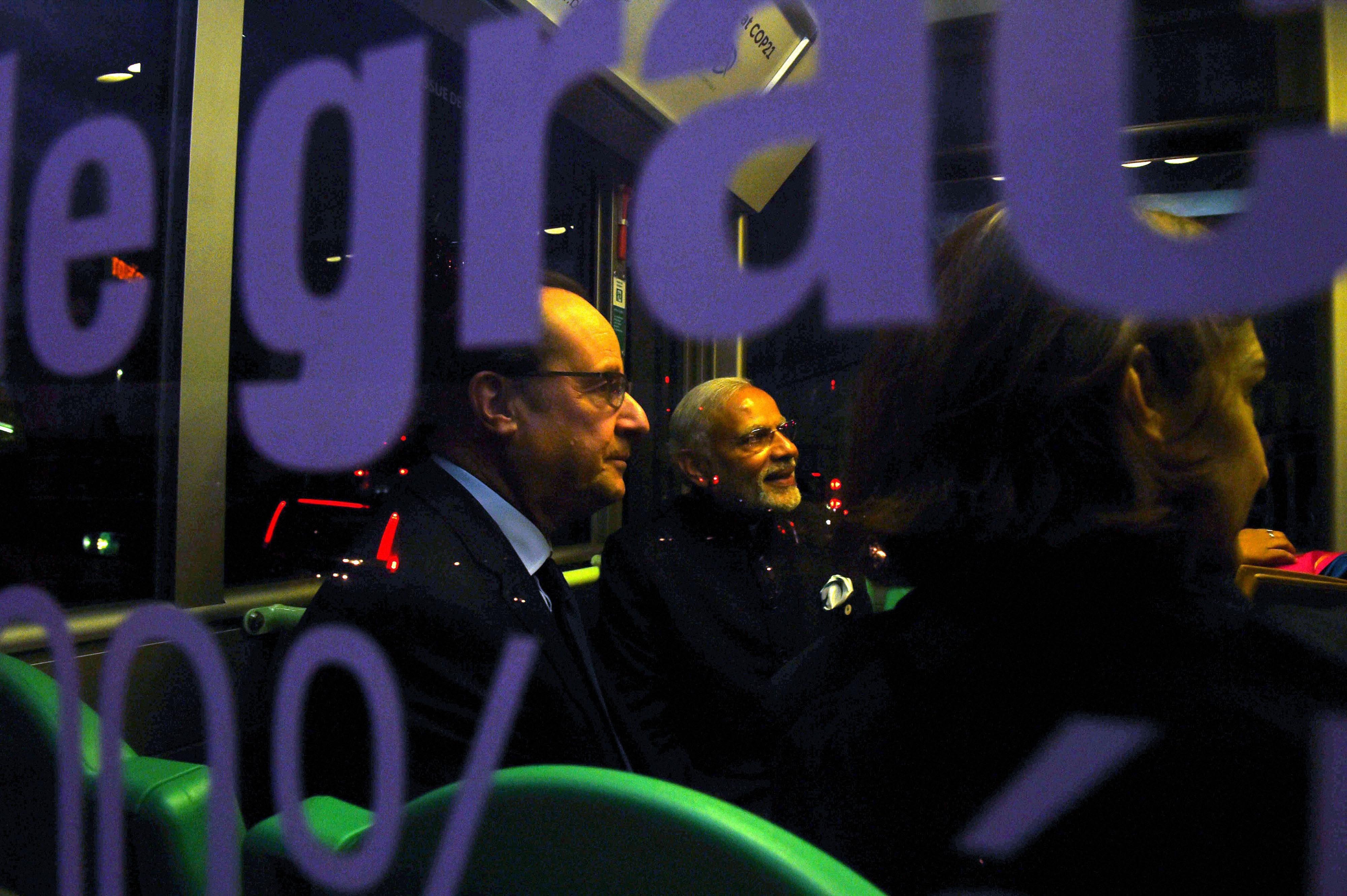 Paris: Sunday night in Paris, images of green trees and messages of hope were projected onto the Eiffel Tower, but there were few on the streets to see it. The imagery is part of an art installation by Naziha Mestauoi, timed to coincide with the first few days of the UN climate change conference (otherwise known as COP21) in the city. In the words projected amidst shifting green lights on the tower, one can make out a general theme – “peace” appears momentarily, followed by “liberté.”

But there were no crowds around the Eiffel Tower to gaze up and decode words on Sunday evening, and nor were there any around Notre Dame, or any of the usual tourist spots. Earlier in the day, a climate march planned for months had been banned for security reasons (and efforts to resuscitate the march suppressed). Instead, a human chain for climate action stretched 10,000 strong along the Boulevard Voltaire on Sunday morning. The chain of individuals hand in hand took only a quiet pause at The Bataclan, giving way to flowers and photographs, a sign outside the recently attacked theatre where eighty-nine people died still spelling out “Eagles of Death Metal,” the band that played on Friday November 13th.

Most of the world leaders to give opening remarks over the course of November 30th, the first day at COP21, began with condolences with respect to the terrorist attacks in Paris two weeks ago – with one in particular, Prince Charles, breaking out of his native tongue and speaking in French to do so. Many that mentioned the attacks, however, then brought up climate change in the same breath. Although the roots of present instability in the world go back much further than the effects of climate change, changes in climate will make that instability worse. Drought, flood and extreme weather events all stand to lead to mass migration and unrest on a scale that our global civilisation does not have the capacity to deal with.

The attacks in Paris two weeks ago serve as a reminder, in other words, of just how important these climate change talks are. And after two decades, a legally binding agreement may finally be in the making this December, spelling out how the nations that have the greatest responsibility under the UNFCCC (United Nations Framework Convention on Climate Change) will collectively combat climate change. The negotiations have stalled for many different reasons, but large among those reasons is the simple fact that our dependence on fossil fuels runs deep, and is hard to undo. Fossil fuels came to us wrapped up in seductive packaging: millions of years in the making, they are more efficient than any other energy source that we have. Until recently, no alternative sources could come close to being economically competitive. But technology is changing, and so are minds. And already on the first day of the talks there have been large steps in positive directions.

In the early evening on Monday, Indian Prime Minister Narendra Modi and French President François Hollande together announced the launch of an “International Solar Alliance of Countries Dedicated to the Promotion of Solar Energy” (ISA), along with a list of 121 prospective member countries lying in equatorial regions. The goal of this alliance is to make solar energy affordable to sun-rich nations, through transfer of technology and funds from developed to developing countries. Modi stated the intention of the alliance to “mobilize more than $1000 billion dollars of investments,” with India itself contributing $30 million, while Hollande spoke of France’s own commitment to the endeavour and called coal, oil and gas “the energies of yesterday.” The next step, creating a steering committee for the ISA, will begin on Tuesday morning. Some 15 countries have apparently expressed in being part of the committee. Modi also announced that India will host the initiative in the premises of the National Institute of Solar Energy in Gurgaon, Haryana.

Modi invoked the Rig Veda to stress the importance of solar energy. In the Indian tradition, he said, the Sun is the source of all forms of energy. “As the Rig Veda says, the Sun God is the soul of all beings, moving and non-moving. Many in India begin their day with a prayer to the Sun,” he said.

The atmosphere to the declaration was oddly festive, with gifts left on every chair of the crowded press conference room – including a CD of “world music for environmental consciousness” and a book titled Ecology of Our Worlds with a preface co-authored by Modi and Hollande. A music video with nature-themed imagery had even been crafted for the occasion. Only UN Secretary-General Ban Ki-moon struck a slightly more balanced note, bringing his remarks back to the conference at large as he stressed the importance that nations come to a swift consensus on climate change mitigation and adaptation. “Let’s meet at the middle ground,” he said. “We cannot waste any further time.”

For whom the climate bells toll loudest

Coinciding with the launch of the Solar Alliance was a meeting of the leaders of  “climate vulnerable” countries – island nations for whom the conference’s goal of limiting global temperature rise to 2oC is not sufficient.

In order to keep small island nations above water, a limit of 1.5oC is required – but right now voices calling for that limit are not being heard. The meeting of leaders was followed by a gathering of artists and activists, just one building away from the ISA launch but light-years apart in its sombre tone. To end the gathering, spoken word artist Eunice Andrada held the crowd captive with a piece called Pacific Salt, speaking of the ocean that surrounds and which may one day submerge her home country of the Philippines. Slightly-built and self-composed, there was, in the poet’s own words, an inner fire about her words. After her reading, Andrada shared her thoughts on poetry, climate change, and what she hopes will come of COP21.

What is your story? Why did you come to Paris?

Andrada: I was born and raised in the Philippines, based in Australia now. I am a poet for the Global Call for Climate Action, as part of their project called Spoken Word for the World. I am here to balance out these negotiations by countering the hard statistics which people from the outside can’t relate to. We’re here to bring the human perspective to climate change.

How did you come to spoken word?

Andrada: Spoken word entails a sense of urgency different to the written text that you see on a paper, where you can dwell on it for however long you like. When it’s spoken, you know that I am here – what I’m saying is here – and there’s a deeper connection between me and whoever is listening. That’s what has always drawn me to spoken word.

What do you hope will come of COP21?

Andrada: From these negotiations, I want world leaders and all the parties to make bold commitments, and realize that our resources aren’t inexhaustible. That communities are at stake, if we keep taking and not giving back. I want them to commit to launch an engagement which will stop the rise of temperature. Right now, we’re on a 3oC track and we want them to commit to 1.5oC, to stay alive.

If you could speak directly to people in India from the Philippines, what would you say?

Andrada: Our communities are the same, in that we are struggling every day for our leaders to listen to us – for our voices to be heard in the conversations on climate change. We must constantly call for action, and not let these barriers stop us from speaking out.