COP23 Readies for Tense Talks as 2° Goal Becomes Even Tougher

Day one of the UN climate summit outlined fault lines in climate change negotiations even as a global weather report warned that the world was on track to be warmer by 3.2º C by 2100.

The Indian Pavilion at COP23, located in the Bonn zone, features over-the-top LED installations and will host a yoga session every evening. Credit: Aruna Chandrasekhar 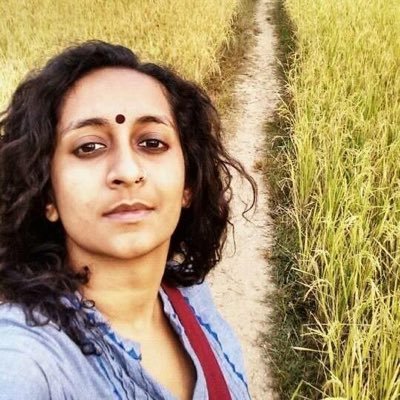 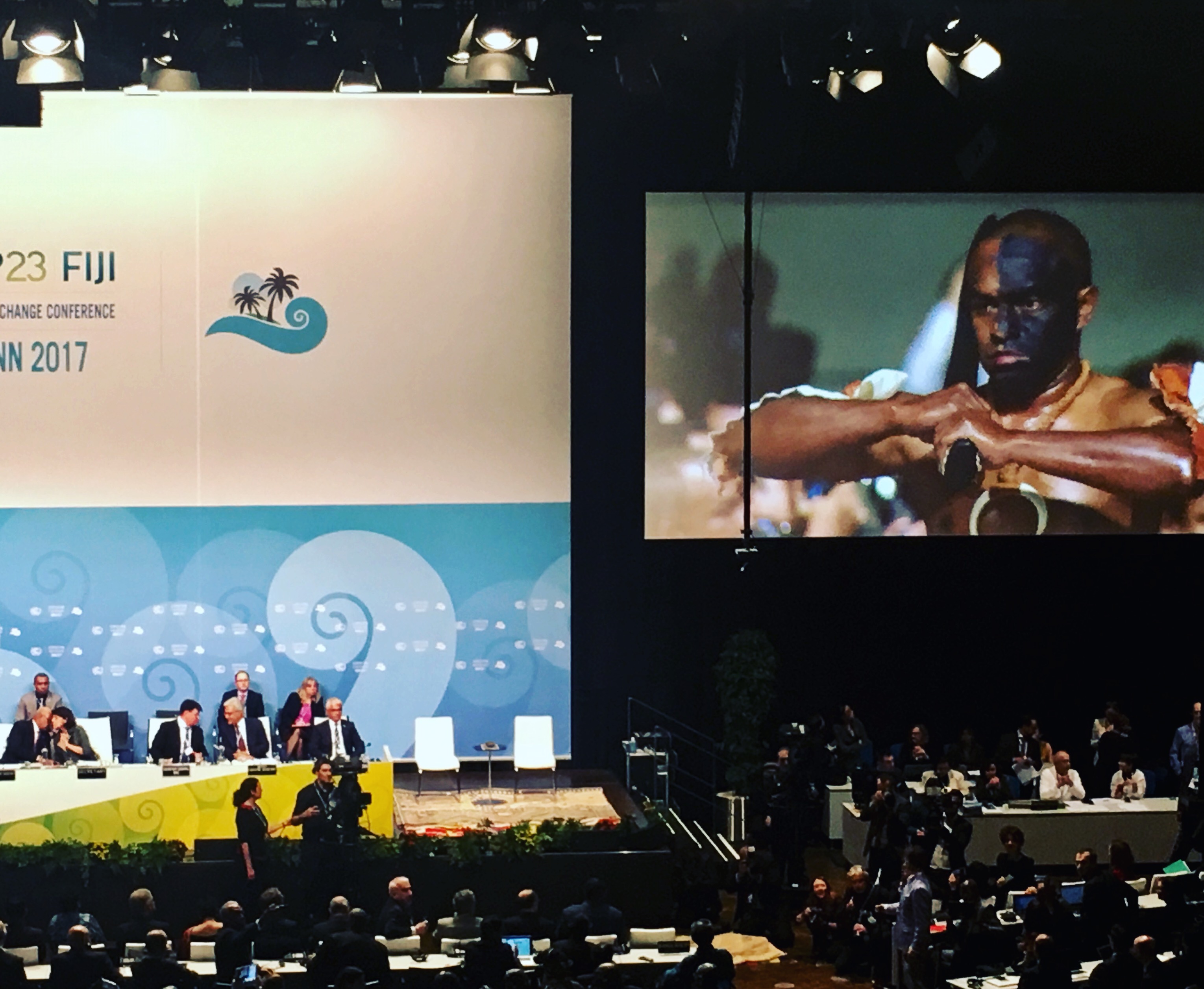 Fijian warriors lock hands as part of a ceremony at the opening plenary. Whether the country’s proposal of an open Telenoa Dialogue goes down well with negotiating groups locked in conflict is anybody’s guess. Credit: Aruna Chandrasekhar

Bonn, Germany: It has become more crucial than ever before to talk about the weather. As the two-week long UN climate summit, known as the Conference of Parties (COP) got underway today, over 20,000 people from every conceivable nationality, age group, gender and political persuasion have arrived in the city of Bonn, Germany, to be part of a conversation that’s as political as it is universal.

That no country can remain an island when it comes to climate action is a feeling that is palpable at this year’s COP, given the extreme weather events that have rattled countries both rich and poor. It’s a good thing, therefore, the COP’s conscience keeper this year is Fiji, amongst the most vulnerable island nations, faced with rising sea levels and the worst impacts.

Many believe that a Pacific COP will help keep the spotlight on “loss and damage” – compensation and reparations for communities that have endured climate disasters. As of this moment, there exists no financial life raft for them under the Paris agreement.

“We have the next two weeks to do everything we can to advance ambition. We must meet our commitments in full and not back away,” said Fiji’s Prime Minister Frank Bainimarama while assuming the COP 23’s presidency at the opening plenary. “Our collective plea is that we maintain the course we set in Paris.” The historic Paris agreement that came into being in 2015 (and kicks in in 2020) has been ratified by 169 countries thus far. In addition, Syria announced on November 7 that it would be ratifying the agreement.

While Trump’s shadow looms large over proceedings this year, the US’s withdrawal symptoms from the Paris agreement have not been the most visibly worrying signs. “We will continue to participate in international climate change negotiations and meetings, including ongoing negotiations related to guidance for implementing the Paris agreement,” said Trigg Talley, the US special deputy envoy for climate change. Cities, civil society leaders and business leaders are stepping in where a petulant leader won’t. “There’s more to America than Trump and I have faith in its people,” said Barbara Hendricks, Germany’s environment minister at the inauguration of the German pavilion.

At the same time, negotiators privately confessed that the Paris Agreement and mitigation efforts would not make sense without America’s full participation – both to curb emissions and to support finance. 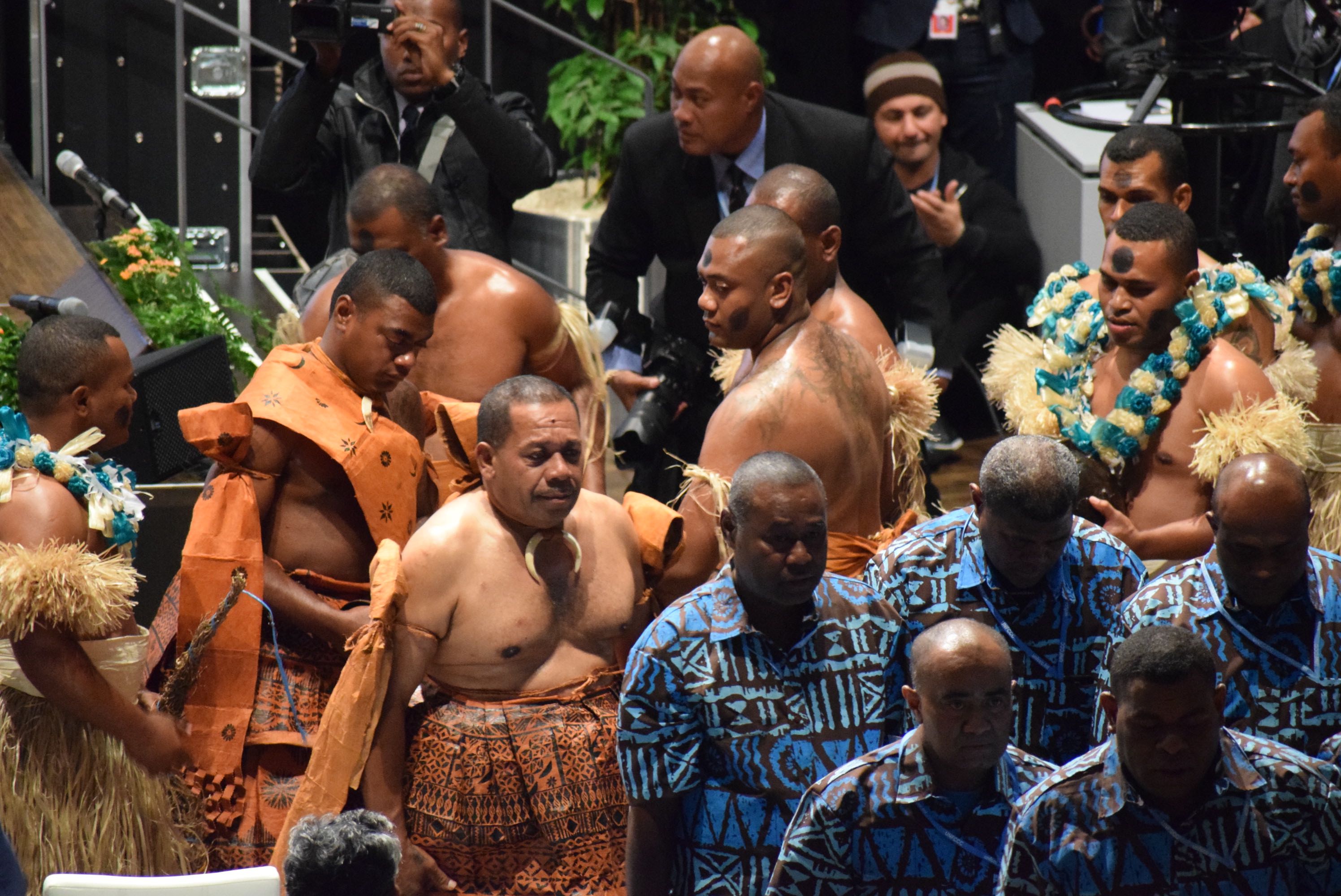 Fijian warriors performed a traditional kava ceremony, where tea from the root of the kava plant was brewed and presented to the COP leaders. Credit: Aruna Chandrasekhar

The real shock-and-awe, however, continued to be provided by climate scientists. The global target has thus far been to keep the rise in worldwide average surface temperatures under 2º C within this century, with 1.5 C as the aspirational limit. However, projections now show that a catastrophic 3.2º C increase is more likely – rendering existing efforts far from sufficient. According to an ‘emissions gap’ report released by the UN Environment Programme this week, current emission reduction pledges by countries will only reduce greenhouse gas emissions by a third of what will be needed by 2030 to avert disaster.

So gallows humour served as a buffer for the doomsday weather report released by the World Meteorological Organisation (WMO), the UN’s weather agency, on November 6. “We foresee no extreme weather events in Bonn for the next two weeks, so let’s say this is great weather to be productive,” said Petteri Taalas, the secretary-general of the WMO. According to the organisation’s provisional statement on the state of the climate, 2017 is likely to be amongst the hottest years on record, with a number of extreme weather events. “We have witnessed extraordinary weather, including temperatures topping 50 degrees celsius in Asia, record-breaking hurricanes in rapid succession in the Caribbean and Atlantic reaching as far as Ireland, devastating monsoon flooding affecting many millions of people and a relentless drought in East Africa.”

It was no different for the Indian subcontinent. According to the WMO’s figures, the all-India rainfall for this monsoon was 5% below average, while more than 40 million people were displaced or otherwise affected by floods.

“Solving this crisis is not just a question of politics, it is our moral obligation,” said Harsh Vardhan, India’s environment minister, at the opening of the India pavilion. “Though India’s per capita emissions are only one-third of the global average and its contribution to the global stock of carbon dioxide is less than 3 percent, it has still moved ahead with implementation of pathbreaking initiatives” under Prime Minister Narendra Modi’s leadership, he added.

Many of these “pathbreaking initiatives” together read like a rehashed list of Modi’s pet schemes. For example, both Digital India and the Swachh Bharat Abhiyan were passed off as part of India’s climate adaptation and mitigation strategy, along with a dubious increase in forest cover.

However, the government’s interventions have remained strong, reminding everyone that 2020 – when the Paris agreement kicks in – might be too late to act. India’s chief negotiator, Ravi S. Prasad, drew attention to the second period of the Kyoto Protocol, to which rich, developed countries are supposed to reiterate their commitments to cut greenhouse gas emissions before 2020 and provide finance and technological support to developing countries. 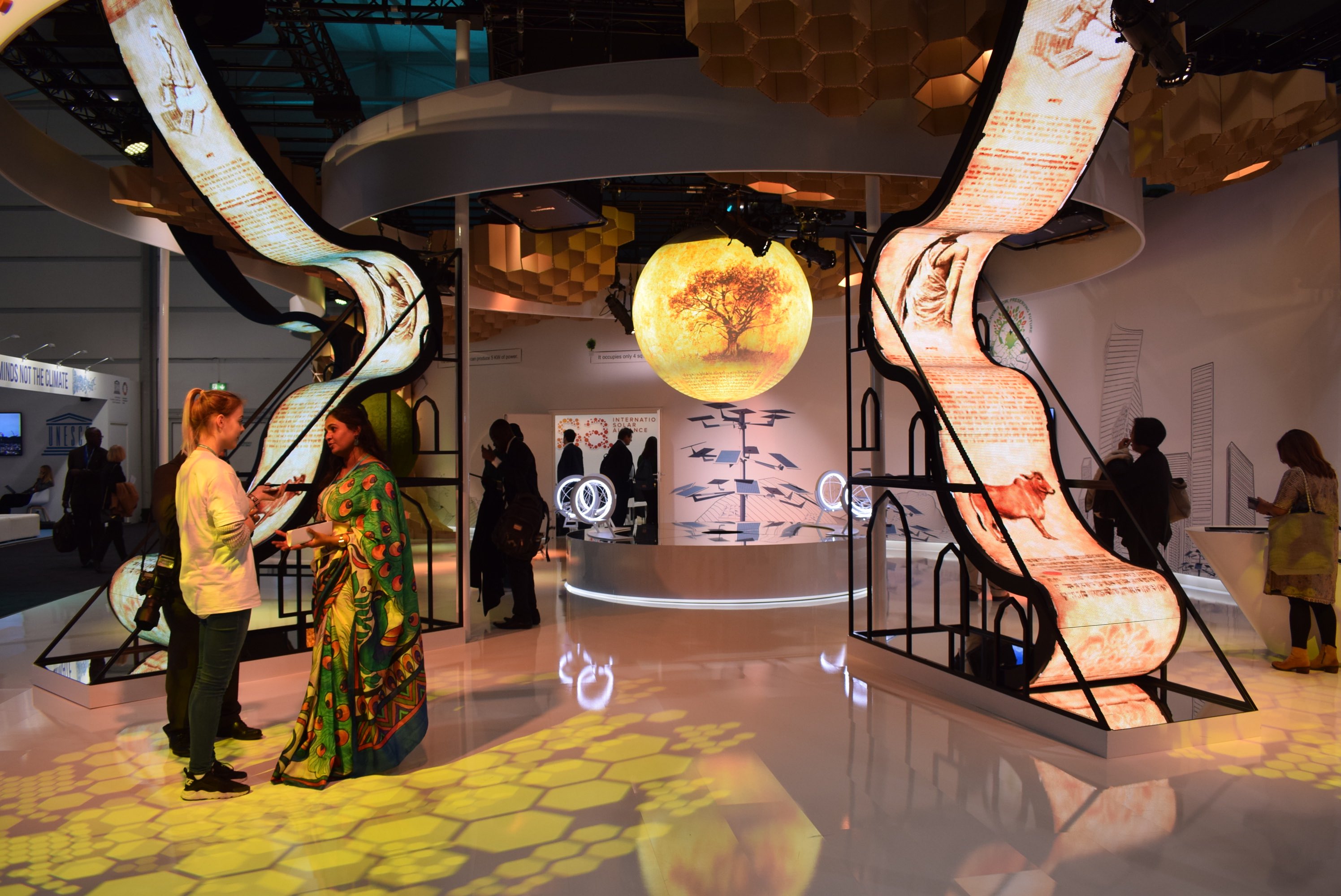 The Indian Pavilion at COP23, located in the Bonn zone, features over-the-top LED installations and will host a yoga session every evening. Credit: Aruna Chandrasekhar

“We no longer have the luxury of time,” said Patricia Espinosa, executive chair of the UN Framework Convention on Climate Change at the plenary. “This, right here, right now, is where we begin.” But despite the emphasis on the ‘now’ and the need for a Talanoa dialogue (a traditional Pacific and Fijian term for inclusive, open and transparent conversation), negotiations were derailed minutes later. The Fijian presidency refused to accept an agenda item that drew attention to pre-2020 pledges, angering India, China and other members of the Like-Minded Developing Countries group – and letting a bit of Bainimarama’s authoritarian streak show.

Getting developing countries to raise their climate pledges will not be easy if developed countries don’t step up. Espinosa and the Fijian chief negotiator, Nazhat Shameem Khan, have their tasks cut out, with trust having been set back from day one.

Then again, if negotiations become divisive on the one hand, they’re likely to become reconciliatory on the other.

“India and Pakistan have the same stance on climate change and we back each other,” said Muhammad Irfan Tariq, the Pakistani director-general of environment and climate change, even if India did attempt to block its access to climate finance last year.

Bonhomie between like-minded negotiating groups inside the arena aside, faith in governments remained at an all-time low on the out. Just this Saturday (November 4), Bonn witnessed its biggest protest ever as 25,000 people marched against fossil fuels, government inaction and Germany’s reliance on coal. And in the coming days, hundreds of side-events and protests by children, women, indigenous groups and civil society will seek to disrupt the detached semantics of climate negotiations and the privilege of delegates to postpone action.

The Climate Action Network has been calling out countries with the least climate ambition through a daily ‘Fossil of the Day’ protest song at every COP since 1999. “We chose to begin this COP with a dedication to civil society and citizens here and everywhere that hold governments to account,” said artivist Kevin Buckland.

With the Obamas, Merkels, Modis and Di Caprios missing, COP 23 will not be a rockstar COP. Many media outlets are also set to return only on the last day. But it will be a critical COP – to see whether all parties, including the US, can rise together against a collective challenge, at a time when climate change has started to directly impact tens of millions of people every year “COP 23 can’t just tell people impacted by climate change ‘Sorry guys, you’re on your own’,” tweeted Harjeet Singh, the global lead on climate change at Action Aid. “This COP should be remembered for taking sides with the most vulnerable people.”

If we’re all truly in the same canoe, it’s time to row harder than ever before. Developed countries must lift their share of the weight so the developing world can lift its ambitions. Tide and time are both against us.