Why is There Little Trust Across the Aisle on Issues of Climate Change?

Making people anxious to ask honest questions, and robbing them of the opportunity to respectfully disagree, isn’t going to do much good for the climate. 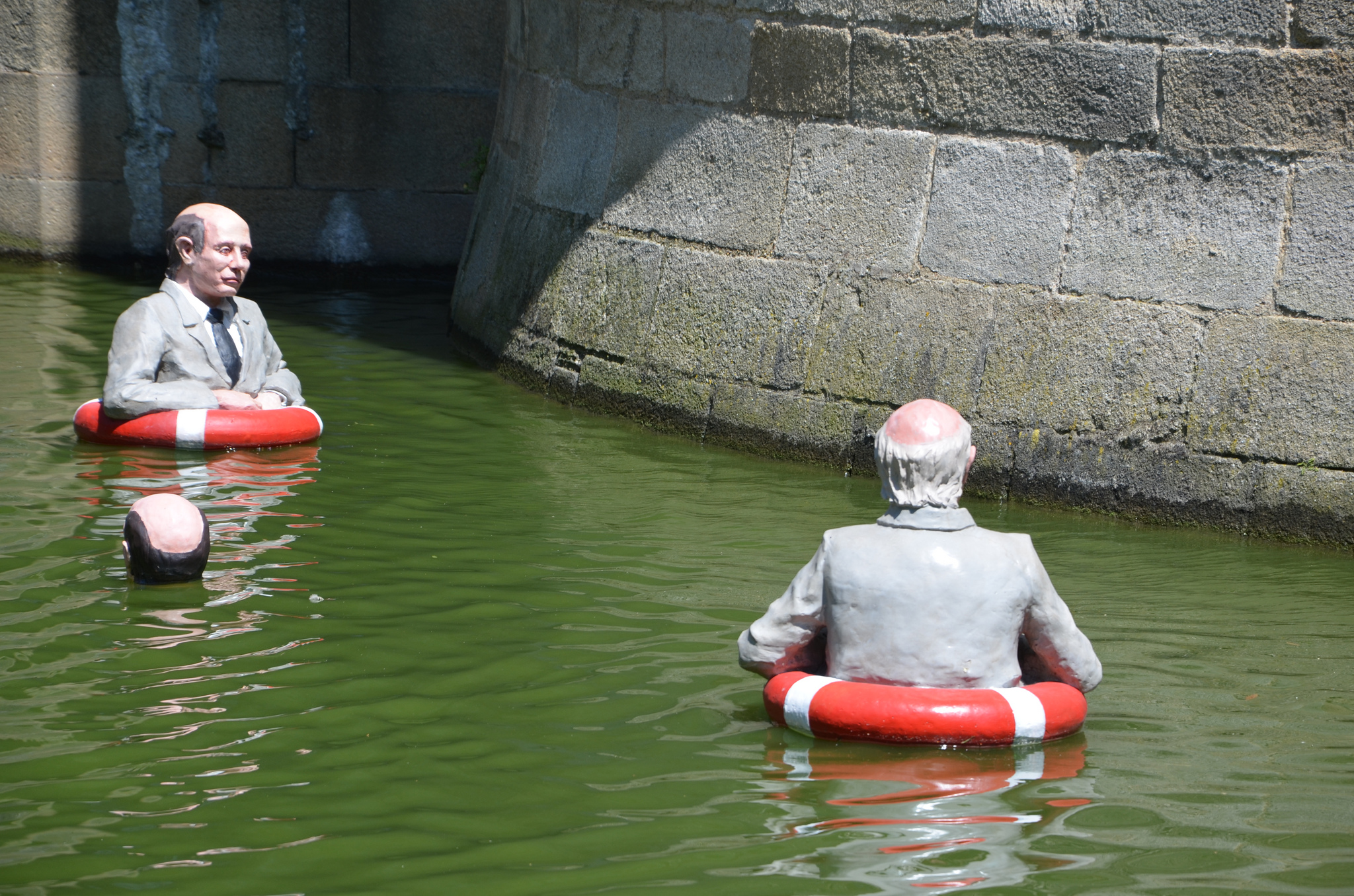 An art exhibit by sculptor Isaac Cordal in Nantes, France, in 2013 shows businessmen with floats going about business after global sea levels have risen due to climate change. Credit: objectifnantes/Flickr, CC BY 2.0

Other than the extreme position that humans are not influencing Earth’s climate in any measure, a retarding force to global climate deliberations also arises from a less radical, and more potent, camp that believes:

AGW is valid. If we don’t do something about the way we’re using Earth’s natural resources, AGW will be extremely damaging to the environment as soon as a century from now. To put it another way: that AGW will force nature to adapt in ways that will no longer preserve characteristics that we have been able to attribute to it for thousands of years. This said: there is a crisis of trust between the pro-AGW and AGW-skeptic camps, a self-fulfilling cycle of distrust that prevents anyone from questioning or criticising pro-AGW efforts without coming off scalded. Two exemplary, and non-exclusive, sources of information highlight the problem well.

A place for doubt

Until the start of 2017, Judith Curry was the chair of the School of Earth and Atmospheric Sciences at the Georgia Institute of Technology, Atlanta. She quit on January 1. Curry shot into the limelight in 2005 after coauthoring a paper that linked a rising incidence of hurricanes with AGW. However, it wasn’t the conclusion of the paper itself but what it led to that put Curry on the climatological map: she began to engage actively with climate skeptics on blogs and other fora in an effort to defend the methods of her paper. And this, for some reason, infuriated her peers. A profile of Curry in Nature in 2010 said:

Climate skeptics have seized on Curry’s statements to cast doubt on the basic science of climate change. So it is important to emphasize that nothing she encountered led her to question the science; she still has no doubt that the planet is warming, that human-generated greenhouse gases, including carbon dioxide, are in large part to blame, or that the plausible worst-case scenario could be catastrophic. She does not believe that the Climategate e-mails are evidence of fraud or that the IPCC is some kind of grand international conspiracy. What she does believe is that the mainstream climate science community has moved beyond the ivory tower into a type of fortress mentality, in which insiders can do no wrong and outsiders are forbidden entry.

But Curry’s position has diverged further since: On April 15, 2015, she testified before the US House of Representatives Committee on Space, Science and Technology that she didn’t think scientists knew how much humans influenced the climate, especially since the 1950s. This was a discomfiting discovery because the testimony now cast doubt over what qualms Curry had with climate science itself instead of only with the ‘attitudes’ subsection of it. Ken Rice, a computational astrophysicist at the University of Edinburgh, commented at the time that Curry was simply missing the point – it wasn’t the precision of our knowledge that mattered anymore, simply that we knew enough to realise the magnitude of what was coming.

Again with all the we don’t knows. Yes, we might not know but we have a pretty good idea of what caused the Little Ice Age (reduced solar insolation and increased volcanic activity) and it was obviously not attributed to humans. Why is that even worth mentioning? Again, we might not know what will happen in the 21st century, but we have a fairly good idea of what will happen if we continue to increase our emissions.

So, if we’re going to move forward by acknowledging that what we’ve been trying so far has failed and that others should have a stronger voice, why would we do so if some of those others don’t appear to know anything? Given this, I’ll expand a little on my thoughts with regards to [Steven] Mosher’s point that with regards to policy, science doesn’t much matter. Yes, in some sense I agree with this; let’s stop arguing about science and just get on with deciding on the optimal policies. However, science does inform policy and I fail to see how we can develop sensible policy if we start with the view that we don’t know anything.

In the same vein: what reason is there to get out of the ivory tower at all if, from within, climate scientists have been able to accomplish so much? The simplest answer would be that Donald Trump is set become the 45th president of the US ten days from now, and the millions who voted him to power don’t care that he’s a climate skeptic. Even if outgoing president Barack Obama asserts that the American adoption of clean energy has acquired an “irreversible momentum”, what Trump still could do is delegitimise American leadership of international climate negotiations. AGW-endorsers sitting within their comfort zones of Numbers Don’t Lie could find this a particularly difficult battle to win because the Intergovernmental Panel on Climate Change and its brand of questionable integrity is doing no one any favours either. Even if the body has been on the “right” side of things, its attitude has been damaging to say the least.

Keith Kloor, former editor of Audubon, recently wrote in the magazine Issues of Science and Technology,

Donald Trump’s improbable march to the White House shocked many, but the tactics that made it possible undoubtedly looked familiar to those of us who have navigated the topsy-turvy landscape of contested science. For Trump’s success was predicated on techniques that are used by advocates across the ideological spectrum to dispute or at least muddy established truths in science. … With the ascension of Trump in 2016, have we graduated from truthiness to what some political observers are now calling the post-truth era? Post-truth is defined by Oxford Dictionary as a state in which “objective facts are less influential in shaping public opinion than appeals to emotion.” But this doesn’t do justice to the bending of reality by Trump en route to the White House. You can’t do that simply with appeals to emotion; you need, as his triumph suggests, a made-for-media narrative, with villains, accomplices, and heroes. You need to do what has already been proven to work in warping public perceptions and discussion of certain fields of science.

Those who believe Curry shouldn’t engage with skeptics because her decision could be interpreted as a prominent academic exiting the pro-AGW camp is difficult to buy into – even if Curry did switch camps. It is hard to arbitrate because there are two variables: the uncertainties inherent in climate modelling (even if the bigger picture still endorses AGW) and how that changed the mind of someone of the calibre of Judith Curry. Surely the (former) head of a reputed department at Georgia Tech is not the same as any other skeptic?

Such graduated understanding of doubt, and subsequent engagement, is missing, in one case because it was simply deemed unnecessary. In May 2013, John Cook et al published a paper titled ‘Quantifying the consensus on anthropogenic global warming in the scientific literature’. It was a literature review of 11,944 papers published in 1,980 journals, all papers dealing with climate change. Using a large team of volunteers, the authors then classified each paper into one of five groups depending on what its abstract said about the paper’s position on climate change. These were the results:

Clearly, the way to interpret John Cook et al would’ve been to say it like Der Spiegel did: “Of nearly 4,000 studies dealing with the causes of climate warming, 97 percent support the assumption of human-driven climate change” (translated). However, skeptics, in the course of their arguments, often linger on the 66.7% (7,966) of all papers that were uncertain about or refused to take a position on AGW. Specifically, the exclusion of these papers from the calculation that arrived at a number like “97.1%” is taken to be misguided. After all, they reason, about 8,000 papers out of about 12,000 had seen it fit to not explicitly endorse AGW (even while ignoring that fewer than 2% explicitly rejected AGW).

Dana Nuccitelli and John Cook, two of the paper’s authors, tried to explain these numbers thus on the Skeptical Science blog:

We found that about two-thirds of papers didn’t express a position on the subject in the abstract, which confirms that we were conservative in our initial abstract ratings. This result isn’t surprising for two reasons: 1) most journals have strict word limits for their abstracts, and 2) frankly, every scientist doing climate research knows humans are causing global warming. There’s no longer a need to state something so obvious. For example, would you expect every geological paper to note in its abstract that the Earth is a spherical body that orbits the sun?

Isn’t it obvious that there is an attitude problem here? The first sentence – “We found that about two-thirds of papers didn’t express a position on the subject in the abstract, which confirms that we were conservative in our initial abstract ratings” – is more of a self-fulfilling prophecy than anything else. The first part of the second sentence requires even more analysis to verify, considering the 11,944 papers they parsed appeared in 1,980 journals, and the fraction of journals that set a word-limit for the abstract might just be non-trivial. The second part is the display of off-putting arrogance. Doesn’t saying “frankly, every scientist doing climate research knows humans are causing global warming” imply the authors are being dismissive of their own conclusions? And finally, that Earth orbits the Sun is far more obvious than a thesis the defence of which rests on the presumption that the thesis is right – a circularity that renders all facts moot.

While none of this makes us question the validity of AGW, which finds endorsement for reasons other than just scientific consensus, Nuccitelli-Cook’s pseudo-defence doesn’t help us trust them in particular. In fact, their position ought to make us more suspicious of why they arrived at a number like 32.6% when they were assuming at the outset that it would really be 100%.

And as it happens, Nuccitelli and Cook don’t appear to be in the minority. To assume that all climate researchers know AGW is valid is also to presume that those who dispute its existence or extent are not really climate researchers (if they’re in the same field). This also appears to be the case with Curry’s detractors.

It ought to be rewarding to engage with people from across the aisle instead of letting them persist with information they think is credible but which you think is incredible – to the point that, over time, we become habituated to disregarding them irrespective of the legitimacy of their demands. Moreover, giving room for people to disagree, to engage with them by making your methods and data available, and working with them to conduct replication studies that test the robustness of your own methods are all features of research and publishing that are being increasingly adopted to everyone’s benefit, most of all science’s.

It’s not hard from here and now to see that moving the other way – by making people anxious even to ask honest questions, by robbing them of the opportunity to respectfully disagree – isn’t going to do much good. Being nice also helps maintain a non-fragmented community that doesn’t further legitimise the impression that “science doesn’t matter when it comes to policy”.

This article is an edited version of a blog post first published on Gaplogs.