In light of the increased health risk, the Lancet report recommends that the world do more to combat climate change. 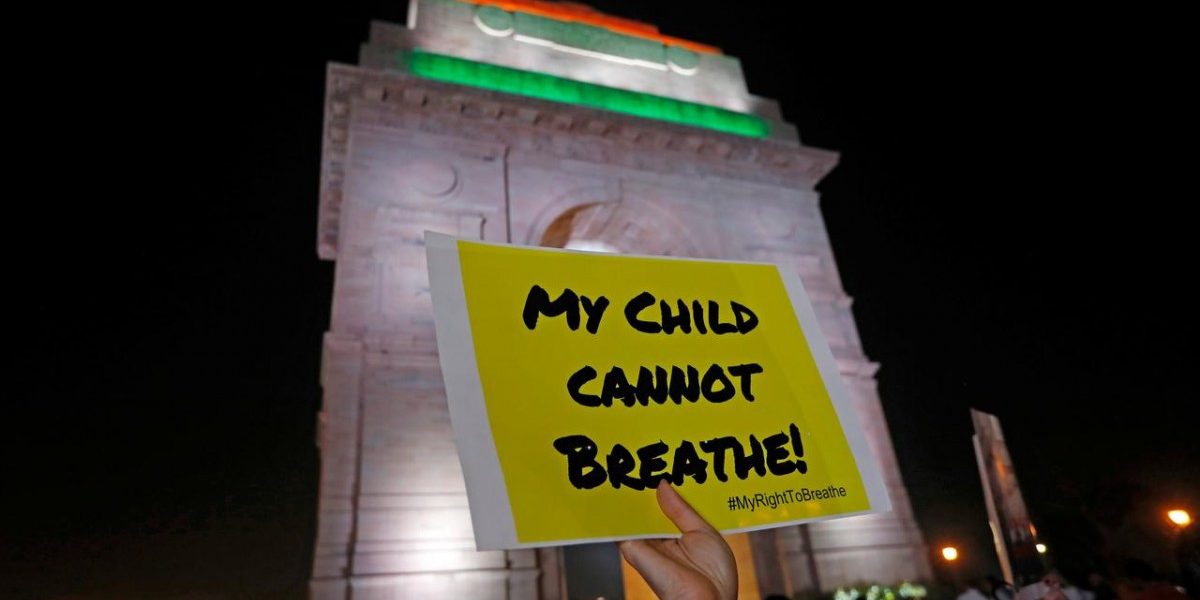 A person holds a placard in front of the India Gate during a protest demanding the government take immediate steps to control air pollution in New Delhi, India, November 5, 2019. Photo: Reuters/Adnan Abidi/File Photo

New Delhi: Children are, and increasingly will be, among the most vulnerable to the adverse health effects caused by climate change, the Lancet countdown report of 2019 has highlighted.

The report, which includes new research from 35 global academic institutions, has pointed out that children are increasingly at risk due to undernutrition as a result of reduced crop yields, increased risk of dengue and diarrhoea as the climatic conditions become more conducive for their transmission and the long term health impacts of increased exposure to air pollution.

The Lancet Countdown looks at 41 key indicators on the links between health and climate change. From India, the Public Health Foundation of India has been working on the report.

“Children are particularly vulnerable to the health risks of a changing climate. Their bodies and immune systems are still developing, leaving them more susceptible to disease and environmental pollutants,” says Nick Watts, executive director of The Lancet Countdown. Children’s lungs are still developing and polluted air will reduce their lung function, worsen asthma and increase the risk of heart attack and stroke.

The report thus has a special focus on what climate change can do to the health of infants and children. Infants will be the most vulnerable to malnutrition and the rising price of food as a result of a drop in productivity. Infants will also be the ones to most suffer from the rise in infectious diseases, especially those infections that are made more likely by rising temperatures.

Also read: The World’s Waters Are Rising – but by How Much, and Where?

For example, malnutrition in India is responsible for two-thirds of deaths of children under five and at the same time, the yield of food like maize and rice has declined by 2% since the 1960s. Also, changes in weather have created favourable conditions for the Vibrio bacteria to grow. This type of bacteria is responsible for diarrhoea and cholera.

Dengue is also being spurred on by climate change, with nine of the 10 most suitable years for the transmission of the disease having been recorded since 2000.

As children grow older, the impact of air pollution is only poised to worsen. India for example, has increased coal-based energy supply – coal is the among the worst air pollutants – by 11% in just the two years between 2016 and 2018.

In addition, the frequency and severity of extreme weather events has also increased in the last few years. Seventy-seven percent of the world’s countries witnessed an increase in number of persons exposed to wild fires between 2015 and 2018 compared to between 2001 and 2014. Number of heatwave exposures experienced globally increased to 220 million in 2018.

India experienced the largest increase in exposures to both heatwaves and wildfires. Wildfire exposures in India were numbered at 21 million in 2018 and heatwave exposures numbered 45 million.

“Over the past two decades, the government of India has launched many initiatives and programmes to address a variety of diseases and risk factors. But this report shows that the public health gains achieved over the past 50 years could soon be reversed by the changing climate,” says Poornima Prabhakaran from the Public Health Foundation of India.

She recalls the 2015 heatwave in India that killed thousands. She notes that very few countries will suffer the health effects of climate change as much as India, due to the huge population, healthcare inequality, poverty and malnutrition.

The report also points out the inequality in this situation – people living in low- and middle-income countries are definitely the most exposed to the public health risks of climate change. These people are not able to respond adequately also because the public health challenge is compounded by poor health health systems and infrastructure.

All the above are a result of warming temperatures across the world. Global temperature has already increased by 1 degree celsius above pre-industrial levels, a United Nations report said last year. And it is likely that by 2100, the world would have warmed by between 3 and 5 degree celsius.

In light of the increased health risk, the Lancet report recommends that the world do more to combat climate change. The report has been published just in time for the UN’s climate conference (COP25) happening in Spain next month.

The Intergovernmental Panel on Climate Change’s (IPCC) SR 15 report – sometimes also referred to as the ‘doomsday report’ – released last year warned that the 2 degree celsius target is insufficient to avert climate catastrophe. It said that climate impacts would be exponentially more in a 2 degree warmer world compared to a 1.5 degree warmer world.

In order to be on track to limit global temperature rise to 1.5 degree celsius, the Lancet report has said, fossil based carbon dioxide (CO2) emissions need to be cut by 7.4% every year between now and 2050.

The report is also accompanied by a policy brief for Indian lawmakers. The brief recommends a few changes for India’s health and environment policies.

Firstly, it says India should establish a real-time monitoring and disease surveillance system to give early warnings on vector-borne disease outbreaks. The brief also suggests that crops should be diversified and crops that require less water and less labour should be grown. Market systems should also be improved to protect those involved in agriculture. Thirdly, it is important for India to urgently implement a strategy to phase out coal and quickly move to low carbon and renewable energy sources.

Also read: How Climate Change is Driving People Out of Central America

Globally, the report recommends a rapid, urgent and complete phase out of coal-fired power worldwide. High-income countries also need to meet their financial commitments of $100 billion a year by 2020 to help low-income countries in this climate change transition. Governments need to increase accessible, affordable, efficient public transport systems. Countries also need to invest in health system adaptation to ensure that it has the capacity to treat patients with existing and new diseases.