China Revokes Ban on Trading Products Made From Tigers, Rhinos – What Next?

India itself is home to about 60% of tigers and 80% of the greater one-horned rhinos in the world. 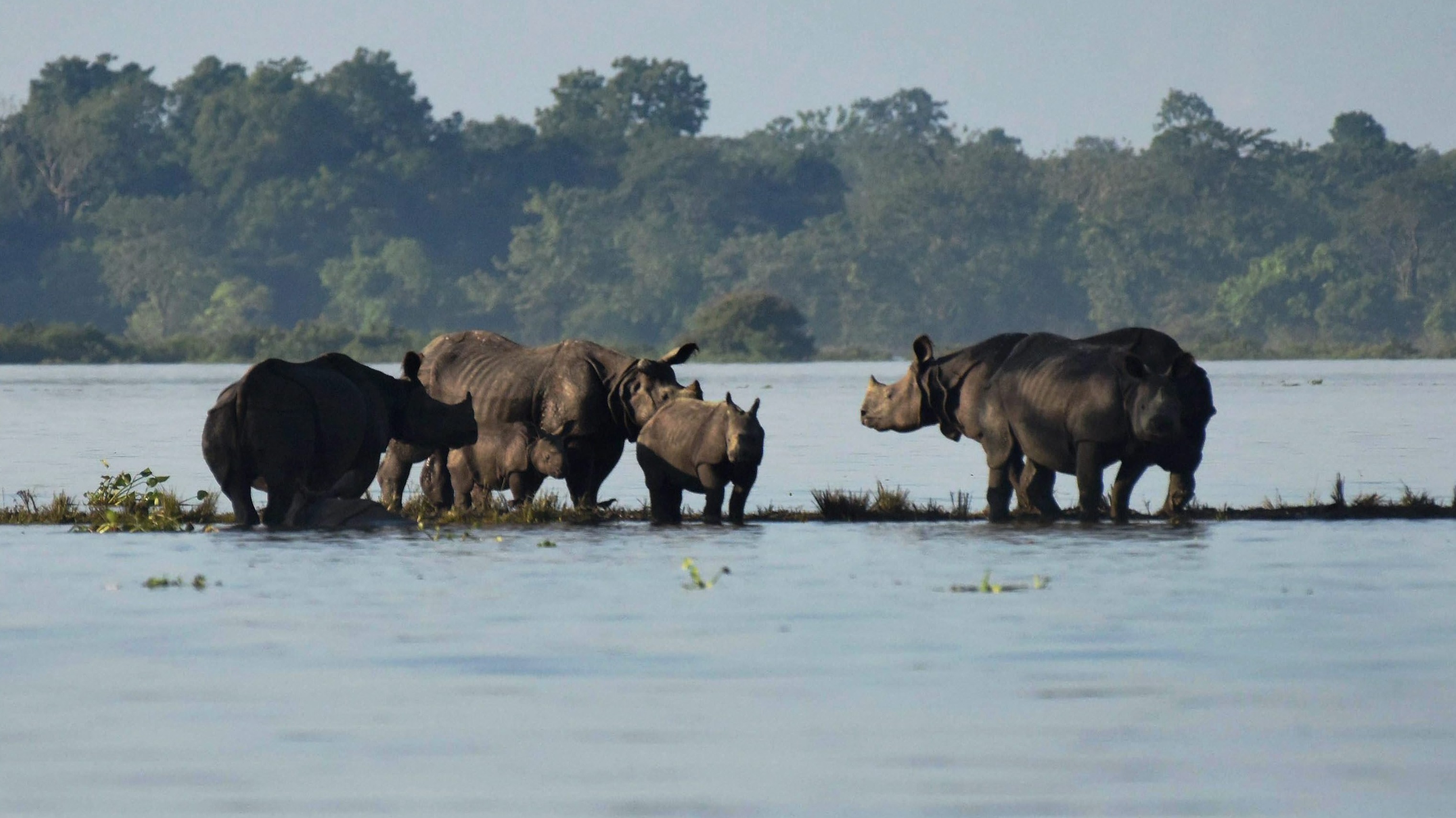 Rhinos with their calves standing on an elevated land in the flooded Kaziranga National Park in Assam. Credit: PTI

In March 2018, Sudan, the last surviving male northern white rhinoceros, died in Kenya. Two days ago, Avni, a.k.a. T1, was shot dead. Even as various groups continue to argue about right and wrong, the inescapable reality is that fewer than 30,000 rhinos and 3,900 tigers remain in the wild, the numbers dropping with every new estimate.

Even so, on October 30, 2018, China withdrew a 25-year ban on trading in products made from tigers and rhinos under “special circumstances”. This allows for rhino horn and tiger bone products to be used for medicinal research and healing. Chinese medicine uses them to prepare wines, powder, balms and pills, apparently for their anaesthetic and analgesic abilities. But scientists have proven that they are no better than, say, aspirin, which has the same effects but at a more affordable price.

China’s move effectively gives sanction to organised crime syndicates, paving the way for international wildlife trade and pushing demand for these products. It is notable that China acceded to the Convention on International Trade in Endangered Species of Wild Fauna and Flora in 1981.

A government notice avoided mentioning any change in the law, saying instead that it would “control” trade and that rhino horns and tiger bones could only be obtained from “farmed” animals for use in “medical research or in healing”.

Even during the erstwhile ban, China permitted tiger farms to operate, where the bones of dead animals could be collected. Conservationists have continued to argue that there is no way to differentiate between bones and horns harvested from “farmed” animals and those from wild ones. So the move is expected to intensify trade and fetch greater prices simply because the animals’ derivatives may not have been “farmed”.

Some five years ago, the average rhino horn was worth $600,000. Two years ago, illegal wildlife trafficking was known to be the fourth-most lucrative global crime after those of drugs, humans and arms. This suggests that if there is demand, there will be supply in the market. And as demand is expected to increase manifold with China’s move, supply is also expected to follow.

Also read: The Media’s Disservice to India’s Wildlife That Only It Can Fix

The revoke makes it possible for poachers and smugglers to hide behind legalised trade along with increased pressure on vulnerable animal populations. This in turn is expected to have a cascading effect on forests and the conservationists, rangers and communities working to protect the flora and fauna.

Additionally, as wildlife crime becomes more complex, trade becomes easier and criminals more dangerous, countries across the subcontinent – India, Bangladesh, Bhutan and Nepal – are finding it more challenging to protect these animals in the wild and contain illegal wildlife trade. Such trade is managed by crime syndicates operating in multiple geographies.

India itself is home to about 60% of tigers and 80% of the greater one-horned rhinos in the world. Between January 2013 and June 2016, almost 1,300 cases related to illegally harvested and/or traded wildlife and wildlife products were lodged around the country. They involved at least 180 species, including 48 mammals, 33 reptiles, 71 birds and four trees. Of them, 124 cases involved the Indian one-horned rhino and 113, of the Bengal tigers.

In this context, the Siliguri Corridor is particularly important. It is a narrow but strategically important ~100-km-long stretch on National Highway 31, in West Bengal. It connects the northeastern states to the rest of the country. It borders Nepal and Bangladesh, which flank the corridor, and touches a southern area of China.

The Siliguri Corridor contributes significantly to the world’s illegal animal trade. Indian border security agency records say animal body parts are regularly recovered in places along this corridor. Why? Because, apart from touching multiple international borders, the corridor runs through over a dozen national parks or sanctuaries.

The need for regional cooperation is evident and urgent. No single country can manage or eliminate the threat of wildlife poaching on its own – nor can a single country manage a contiguous, cross-border wildlife habitat effectively.

From a national security perspective, the biggest concern in areas like the Siliguri Corridor is not just wildlife crime but how it has been assuming new forms. Official have already unearthed links between such crimes and funding for rebel groups, militia and potential terrorist organisation, as well as arms trade. An industry that was once fed by isolated poaching incidents is now gaining legitimacy, seemingly run by organised trans-border criminal networks, similar to those dealing with narcotics and guns. If we don’t act now, we may soon be faced with demons bigger than we can deal with.

Regional cooperation will not be simple, assuming it is actually realised. If it is, conservationists, fieldworkers, rangers and forest guards will pay crucial roles in ensuring it is effective, while also working to overcome any reluctance on the parts of national governments to steer the discourse towards building a safer planet.

Neha Simlai is an international consultant on environmental sustainability and conservation management. A graduate of the Lee Kuan Yew School of Public Policy, Singapore, she has worked across South and Southeast Asia and writes about development sector opportunities and changes. The views expressed here are personal.