Why We Need to Re-Think Our Relationship With Land, in Chhattisgarh and Beyond

Perhaps unwittingly, the state government's decision to return land to Adivasis could provoke a much-needed discussion. 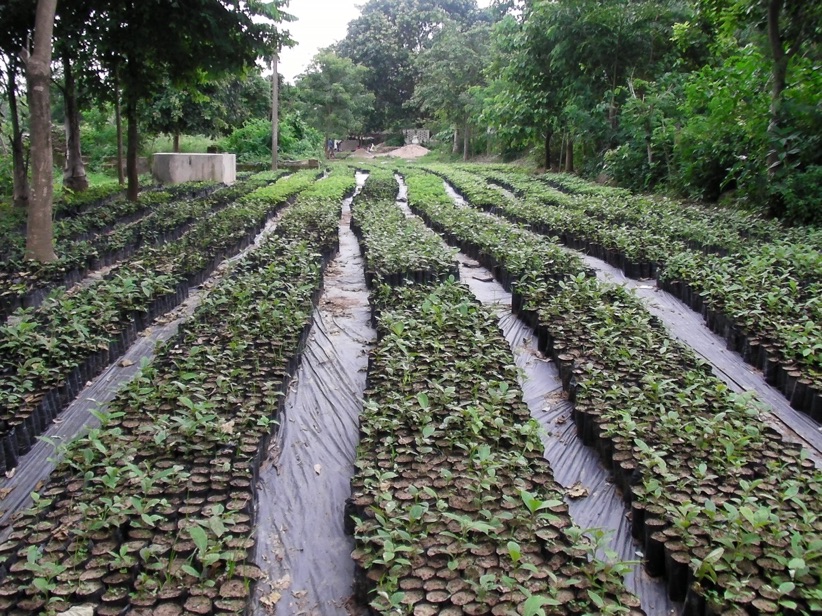 A LEAF nursery with more than one lakh plants. Credit: Madhu Ramnath

The newly-elected government of Chhattisgarh has come good on one of its election promises. It has declared that the 1,764 hectares of land acquired from adivasi farmers for Tata Steel in Lohandiguda and nine other villages in Bastar, will be returned to them.

Ten years after acquisition, there is no sign of a steel plant. The company appears to have lost interest in the site. With industry not taking off, there is no reason to not return the land to its earlier users.

The action of the Chhattisgarh government is unusual, which is why it has made the national news. At the same time, the predicament of the Tatas in Bastar is quite common. The multiple factors that go into capital taking root: the coming together of land, labour, investment and enterprise in a secure and economically conducive environment – need not materialise.

If this is the case, why does big capital and the governments that facilitate it, squat on land? Why is land put on a linear trajectory of agriculture, grazing or other commons use in the primary sector giving way to industry, infrastructure, real estate or other secondary or tertiary sector activity? Why would most governments rather ‘bank’ or hold on to land unused by industry, instead of returning it to its previous users?

Also read: All That Is Green Is Not Forest

The answers lie in our relationship with land, and with nature more broadly. For a couple of centuries at least, human ‘progress’ or modernity has been identified with the institutional control of nature. Humans and their institutions have measured success through the capture, manipulation and disciplining of nature for producing uniformity, productivity and organised social and economic life. Our dams, mass scientific agriculture, mining, industry, big infrastructure and urban conglomerations are all symbols of this modernity, extracted from our domination of nature.

In this growth and GDP-obsessed mindset, land can go from small scale agriculture and pasture to modern industry. But it cannot go the other way; it cannot be reverted from industry or possible industrialisation to ‘mere’ farming.

That would be anti-development when development equals economic and spatial expansion. As a senior bureaucrat told me in Delhi in 2012: “how long can our people go on digging holes in the ground? We need to enter a 24/7 lifestyle.” The derision for rural Indians ‘digging holes’ was echoed by none other than Prime Minister Narendra Modi in parliament in 2015.

Despite prevailing attitudes, climate change demands that we rethink our relationship with nature. Profound environmental degradation brought about by indiscriminate exploitation has taken us to a point where our continued existence on this planet is in serious question. This moment demands that we break from our established ideas. Our engagement with land is a good place to start. We don’t have to look far to discover that the dominant elite’s ideas of linear land use – going from supposedly less to more productive, or ‘24/7’ use – have challengers.

Since 2008, the Dongria Kondh peoples of the Niyamgiri hills have successfully fought the handover of bauxite mining rights of these forested and inhabited areas, to Vedanta Alumina Ltd. for an aluminium refinery. They have protested what they see as land grab, which has endangered their forest-dependent livelihoods, the local environment and their entire way of life. 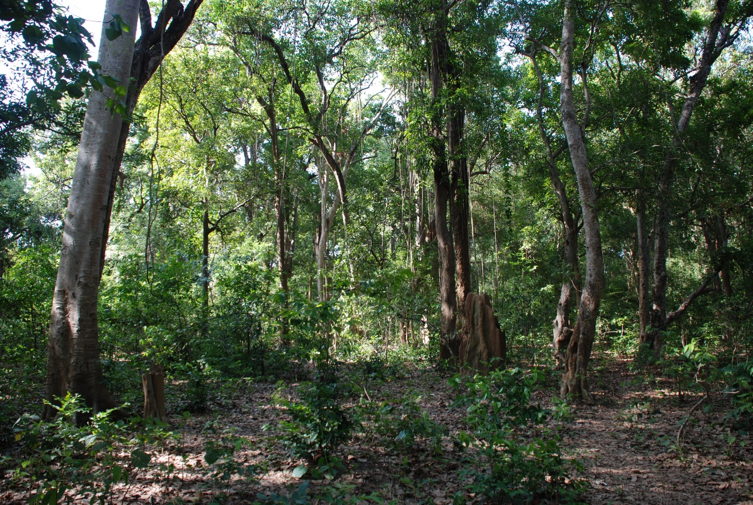 One of the largest sacred groves in Bastar. Credit: Madhu Ramnath

Instead of a uni-dimensional engagement with land for extraction or construction, the Dongria Kondh show us a multi-dimensional perspective. Here, land is livelihood, but it is also life itself. It is the air we breathe and the environment we live in. For them, land is also enlivened in hosting that which they hold sacred. Their deity Niyam Raja is believed to reside in the hills of Niyamgiri.

In the linear march of modernity, the views of the Dongria Kondh may be archaic and far-removed from the fast-paced, glass and chrome lifestyles we have come to value. But in a mindset of environmental sustainability tethered to survival, rather than unrelenting economic growth, the Kondh and many others are signalling alternatives to us.

We don’t even have to rely on indigenous groups to rethink what land and nature are to us. My decade-long, field-based research with stakeholders in land – ranging from government officials and politicians to land-brokers and farmers – evinces multiple ways of seeing and engaging with land.

My interviewees speak of land as the base of economic growth and livelihood. But they also see it as home, as history, memory and ancestry (baap-dada ki zamin ‘land belonging to forefathers’). Land may be considered sacred: spaces in which we pray and invoke that which is holy. Land is territory to be contested, demarcated and secured. Land is politics: it is emotive, worth fighting for, it attracts voters and votes. It is property, over which we have state-adjudicated rights. It is powers of access and exclusion, or the ability to go past the framework of property via mechanisms of possession or kabza.

Land is also materially dynamic, with the boundaries between water, air and land being geomorphologically fluid. In other words, mountains change shape, or beaches appear and disappear as a matter of course. Humans, too, fill water bodies or reclaim the sea, making it hard to distinguish between where water ends and land begins in many contexts.

We engage with land multi-dimensionally everyday. We relate to it through economic, but also social, political, territorial, historical and environmental registers. In a multi-dimensional perspective, land moves in and out of commodity status, if it enters that condition at all. This land can be exchanged on the market but is far from just a marketable thing.

Yet we insist on holding up an artificial, uni-dimensional ideal in our administrative and policy-making discourses. In this view, we fail to look beyond land as a commodity, on an irreversible trajectory of ever-greater making of economic value.

Recent land acquisition legislation, which laudably brings a framework of transparency, participation and fair compensation in the transfer of land from supposedly less to more productive use, continues to fall within a utilitarian, commodity-centric perspective.

In its actions around land identified for the Tata plant, the Chhattisgarh government has shown a broader administrative and environmental vision. With or without intention, it has opened up the space for a much-needed discussion of multi-dimensional land. Apart from various governments’ political longevity, our existence on this planet may depend on changing up the same old ’24/7′ conversation.

Nikita Sud teaches at the University of Oxford. Her book Unfixed Land: The Making of Land and The Making of India is forthcoming.

This article originated in a workshop on multi-dimensional land that took place in December 2018, with the support of the Global Challenges Research Fund.