Chaos at UN Climate Conference as Governments Refuse to Act 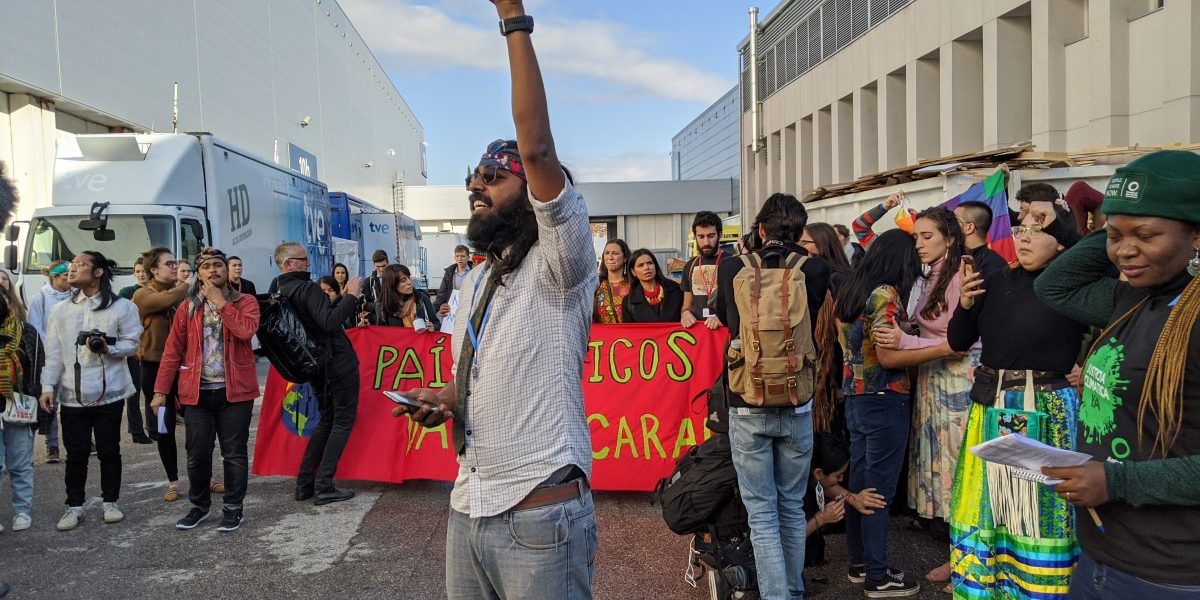 Madrid: Frustrations about the negotiation process at COP25 – which has all but stalled – boiled over into protest led by young adults at the UN climate summit in Madrid, where government representatives have gathered to figure out how they’re going to help each other, and themselves, deal with the effects of climate change.

At a plenary on the morning of December 11, in one of the two main large halls where most of the high level sessions take place, about 50 youth from around the world and different civil society groups walked onto the stage after a panel discussion, involving Swedish climate activist Greta Thunberg, concluded.

They started with the slogan “What do we want? Climate justice! When do we want it? Now!” – a modified version of the slogan demanding climate action and which has become a rallying cry for climate movements across the world.

They were on the massive plenary stage for over five minutes before being told to get down by the United Nations security or their conference badges – without which one cant enter the conference venue and also can’t leave, strictly technically – will be taken away.

But they’d made their point. “This is good. I hope they keep up the pressure and force the rich countries to act,” a negotiator for a developing country said.

A few minutes before the protest, Thunberg – chosen today as Time magazine’s person of the year 2019 – addressed the plenary. She spoke in a more measured and controlled way relative to her speech at the UN climate action summit in New York in September, where she practically scolded the national and international leaders for landing the world in its current mess.

Thunberg began by expressing her disappointment with the faltering negotiations. “Finding holistic solutions is what the COP should be all about, but instead it seems to have turned into some kind of opportunity for countries to find clever ways for emission reductions like double-counting emission reduction,” she said.

“The Australian government claims it is ‘entitled’ to use over 400 million surplus credits under Kyoto Protocol, generated from a generous baseline and weak targets that allowed it to increase emissions,” Richie Merzian, director of the climate & energy program at The Australia Institute, told The Wire.

So far, Australia has been alone in its call, but it’s still audacious because the continent-country has been facing a spate of bushfires thanks to a severe drought.

Describing such efforts at COP 25 as ‘clever accounting’ and others as ‘creative PR’, Thunberg called on the world to unite and mobilise. “We don’t have to wait. We can start the change – we, the people,” she said at the end of her speech.

Over the last year, people have grown louder with their demands for change and the climate action movement has spread, rapidly gaining in strength after Thunberg’s solo protest outside the Swedish parliament in August last year.

What has been happening on the outside also travelled inside today when a large number of protestors besieged the plenary venue just before a high-level session in which UN secretary general António Guterres was supposed to speak.

People gathered around both gates to the venue bearing posters and demanding urgent and equitable action. There wasn’t much space available but some protestors did break into song and dance, amidst journalists security personnel and other onlookers.

One protestor in charge of reading from a manifesto found himself isolated as his comrades – the chorus – somehow found themselves in another corner of the room. He read out anyway and they echoed him from where they stood.

It was all quite different from the corporate-style meetings the UN had organised. It was chaotic.

Members of the security team tried to snatch some of the protestors’ posters and placards, but failed. So then they formed a human chain – not of solidarity but of security, to let people in black suits and black ties pass through.

The personnel then shepherded the protestors outside the venue. Some of the latter later alleged assault, but The Wire couldn’t independently verify the accuracy of these claims. Outside, the protestors regrouped and composed themselves, before starting up again.

“We are here in solidarity with front-line communities. Millions of people in the global south are facing the worst of the climate crisis. We are here because we haven’t forgotten about them,” Angela Valenzuela, a resident of Chile, said.

Equity and justice for indigenous were key themes in each of the speeches. The protestors also made clear their opposition to the idea of carbon markets, one of the key items on the agenda at COP25.

After about half an hour, the security personnel escorted protestors to the venue’s exit while journalists were let back in. The summit’s organisers and other partners later issued a statement that the protestors would be let back in.

The entire sequence of events hasn’t gone down well with civil society groups, also evicted from the venue. Harjeet Singh, a meber of Action Aid International, said, “This is turning into a forum only for rich countries and corporations while those who are already facing climate emergency are not getting any support.”

In the meantime, parties to the Paris Agreement have been unable to agree on even one of the agenda items. The gulf between developed and developing countries has only been growing.

Today, Brazil, South Africa, India and China issued a strong statement expressing their displeasure at the way COP25 has panned out. They objected particularly to the imbalance between efforts to resolve issues relevant to developing countries versus those important to developed countries, with the balance – according to them – tilted towards the latter.

By the end of the day, fortunately, there was some positive news on the climate-change mitigation front: 73 countries had notified the UN that they intend to scale up their climate ambitions by 2020.

Note that these are only promises; whether those who make them will also act on them remains to be seen.