As many areas of J&K's winter capital are already water-stressed, city officials are desperate for succour – so much so that they have plans for drawing even more water from natural sources and no plans for cleaning or recharging them. 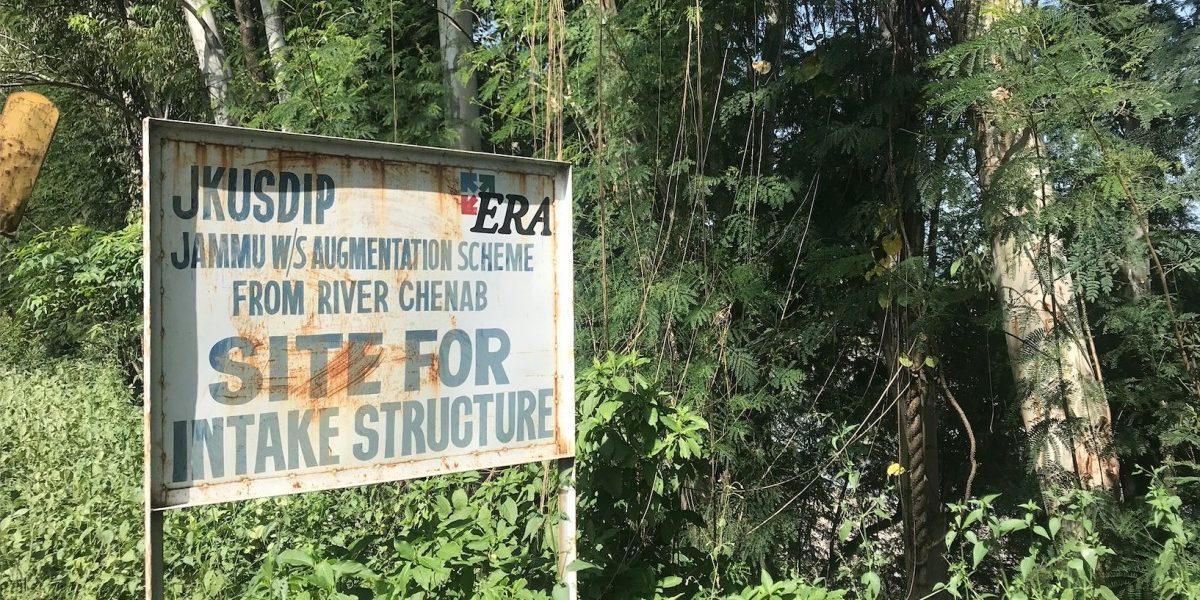 The intake point near Chenab river in Akhnoor from where water is to be lifted and supplied to Jammu, 30 km away. Credit: Nidhi Jamwal

Jammu: The much awaited Chenab water diversion project to meet the drinking water needs of Jammu’s population was approved by various departments of the Centre last month. Trapped in the official corridors for several years, the project proposes to divert water from the Chenab river in Akhnoor and supply it to Jammu, the state’s winter capital, about 28 km away.

“We have finally received the no-objection certificate from the Union ministry of home affairs, the Union ministry of external affairs and the Niti Aayog, and can go-ahead with the Chenab water diversion project,” Ashok Kumar Gandotra, chief engineer at the Public Health Engineering (PHE) department, Jammu, told The Wire. “The project is being funded by the Japan International Cooperation Agency [JICA] and its officials will soon visit the site, and thereafter, work under phase-I would start.”

In spite of a sense of jubilation in the state department, some water sector experts have raised doubts over the efficacy of proposed project. “Turbidity of Chenab’s waters is very high, as it carries a lot of silt,” said a former member of the Jammu and Kashmir State Water Resources Regulatory Authority who did not wish to be named. “Cleaning its water, pumping and transporting it to Jammu will be a very costly affair.” The role of the water authority is to ensure judicious, equitable and sustainable management of water resources in the state. “The water diversion project may incur an annual operation and maintenance cost of Rs 50 crore. Can the state afford it and will it be sustainable?” the member asked.

The city of Jammu is the winter capital of Jammu and Kashmir for six months a year. It is situated on the banks of the Tawi river, which also flows through the city. On the eastern bank is the old part of the city and on the western bank, the new. The Tawi flows from Jammu and Kashmir to Punjab in Pakistan, where it joins the Chenab.

The potable water supply distribution system was introduced in Jammu in 1934 with the Tawi as the surface source. Over eight decades later, the Tawi continues to meet the city’s drinking water needs together with groundwater. The Chenab river in Akhnoor. Its water is to be diverted (from near the bridge) and supplied to the state’s winter capital, Jammu. Credit: Nidhi Jamwal

“Although river Tawi is a perennial river, flow in the river is lean except in monsoon period,” according to an April 2012 report prepared by the Economic Reconstruction Agency (ERA) of the state government for the Asian Development Bank (ADB), which has been funding some water supply projects in Jammu. “Only [86 million litres per day] of surface water is reserved for water supply purposes. … Due to limited availability of surface water from river Tawi, remaining requirement of drinking water is met from the ground water sources.”

He added that the city does not have a harvesting programme.

Some pockets of the city face acute water shortage because of their location on the hilly terrain: at the tail-end of water-supply lines. These include Bantalab, Janipur, Roop Nagar, Bhatindi and Sainik Colony.

“Water stress is the biggest stress in our lives. There is no fixed timing for water supply. Many a times, water is supplied after a gap of six days,” said Shweta Handoo, a resident of Pritam Nagar, Janipur. “We survive on private water tankers, which bring water from near Akhnoor and charge Rs 2,500 for 1,500 litres of water.”

Jammu and Kashmir had proposed the Chenab water diversion project in the 1980s to meet the future drinking water needs of Jammy city. Not much progress was made on this front until in 2006, a survey for diverting the Chenab’s water was conducted and a detailed project report was submitted to the ADB. However, official delays lead to the project’s abandonment. Subsequently, the ADB also pulled out due to “procedural reasons of environment impact assessment studies and the Indus Waters Treaty with Pakistan”.

The Indus Waters Treaty, signed between India and Pakistan in 1960, addresses water-sharing between the two countries from six rivers in the Indus basin. The treaty gives India unrestricted access to the eastern rivers (Beas, Ravi and Sutlej), with some exceptions; Pakistan has unrestricted use of the western rivers (Indus, Jhelum and Chenab), which India is under obligation to let flow. However, India can use the waters of the western rivers for “domestic use, non-consumptive use, agricultural use and generation of hydroelectric power”.

“The Chenab water diversion project for Jammu city is meant for drinking purposes only, hence it does not flout the Indus treaty,” said the unnamed official of the Water Resources Regulatory Authority.

The project was revived in 2014 and a revised report was forwarded to the Centre. Last month, the project finally received all clearances from the concerned agencies, including the home ministry. 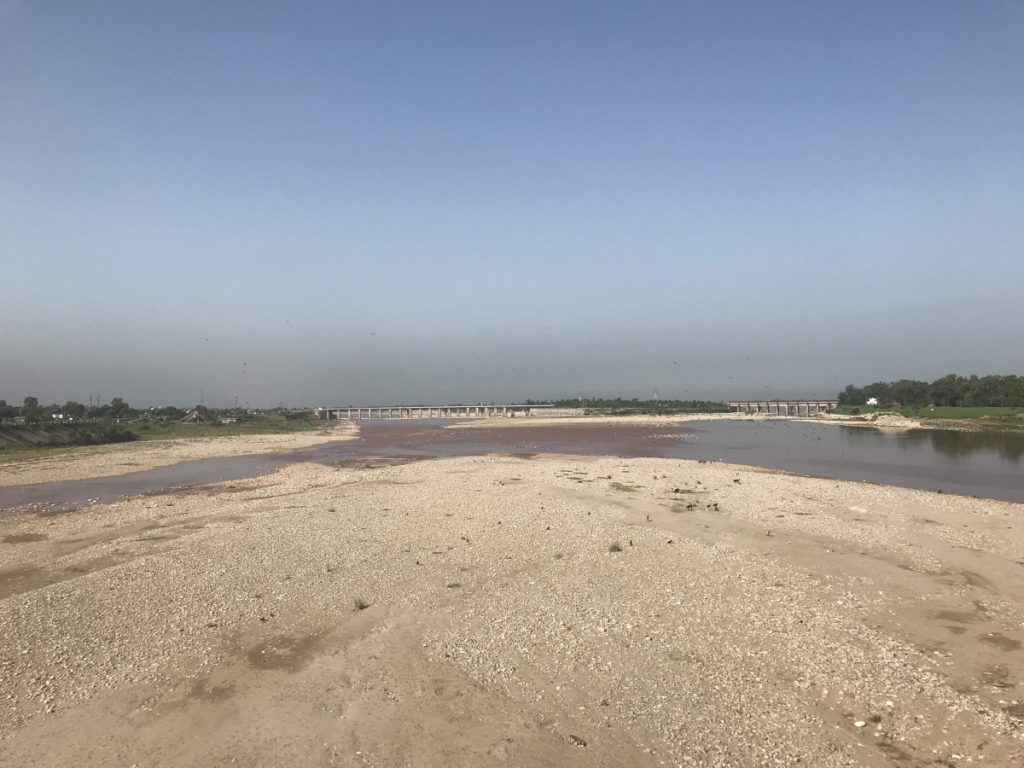 According to the proposal, water from the Chenab will be diverted and lifted at the Ranjan lift station in Akhnoor, about 30 km from Jammu. Thereafter, the water will be treated in filtration plants and transported through pipes till Muthi, about 8 km from the Jammu city centre, for distribution. The project will be undertaken in two phases of 208.2 million litres per day of water diversion each to meet Jammu’s water requirement till 2046.

The project isn’t the only one proposed to quench Jammu’s thirst: the PHE department has conceived of another to meet the more immediate water needs of people living in water-stressed areas of the city.

As a“Rs 350-crore, short-term, three years’ project to be funded by the ADB, we have proposed to dig 64 tubewells” to draw 56.7 million litres per day of groundwater, Gandotra said. “Thirty-two of these tubewells will be on the [eastern] bank side of the Tawi and the rest on the [western] bank, thus covering both regions of the city.”

He also added that his department was committed to adding another 15.1 million litres per day from the Tawi river within the current financial year, 2018-2019.

Groundwater in many parts of Jammu is in phreatic aquifers, which are shallow. On the eastern bank of the Tawi, the water is between 3.6 m and 91 m deep. On the western bank, it varies between 7.55 m to 92.8 m. Notwithstanding high iron and nitrate content in some pockets, the quality of groundwater in Jammu has remained thus far within permissible limits.

“As per the 2013 data of the Central Ground Water Board [CGWB], Jammu comes in safe category as groundwater extraction is less than 50 percent of the available potential,” according to an official at the CGWB’s Jammu office who wished to stay anonymous. “However, keeping in mind increased groundwater extraction, there should be some critical to over-exploited groundwater zones in the city. And this can be a major concern in the coming years, as several cities in India have over-exploited their groundwater and are in the dark zone.”

The PHE department works in tandem with the local CGWB office as the latter conducts geophysical and hydrological studies to recommend spots for digging tubewells and gives permission for the same. The PHE department’s cost of digging per tubewell ranges between Rs 10 lakh and Rs 40 lakh.

“There are people and private agencies that have illegally dug borewells without any permission. This must be checked and stopped, as over-exploitation can cause severe water crisis in the future,” the CGWB official warned.

Meanwhile, an assessment of the decadal water-level fluctuation in the Jammu region – published in a CGWB report for 2016-2017 – suggests that groundwater levels in the region are falling. 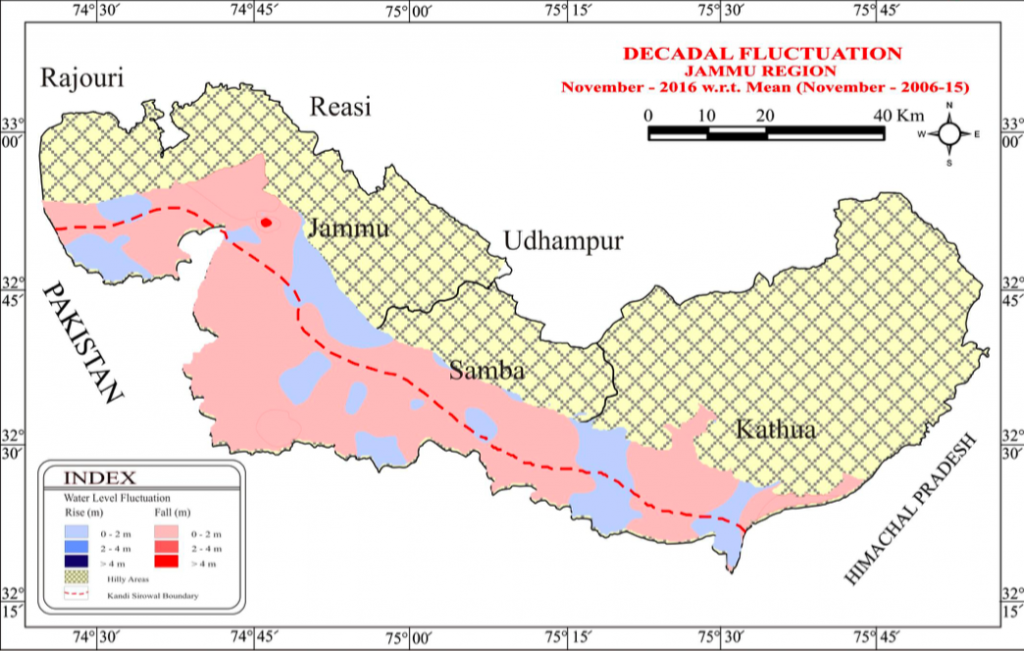 Decadal water-level fluctuation in the Jammu region, as of 2016. Source: CGWB

Whereas state agencies are going ahead with tapping additional surface and ground-water sources to water Jammu, experts warn that exploiting these sources without a plan to recharge them could mean a worse water crisis in the future.

“Of the total 167 million litres of sewage generated in the city daily, only six percent is treated at a sewage treatment plant,” said Rakesh Gupta, executive engineer (sewerage) with the ERA. “The rest is discharged in open drains, which pollutes the Tawi and groundwater, both sources of city’s drinking water.”

Existing water sources in the city are mismanaged and the sources are suffering for it. At the same time, the city is spreading its footprint far and wide to source even more water. Additionally, 35% to 40% water supplied to the city’s population is lost via leakages and theft during distribution. According to the Jammu Water Supply Master Plan 2007, water losses – also known as non-revenue water – in the older parts of the city were as high as 50%. There are some pending proposals to reduce this to 20%.

The former member of the water regulatory authority said that, rather than bringing water from far-away sources, there is a need to conserve and replenish local sources. “Building a series of check dams on the Tawi should help store water and recharge groundwater, too. In 2012, a project was launched to build a barrage on Tawi, but the construction was left incomplete,” he added. 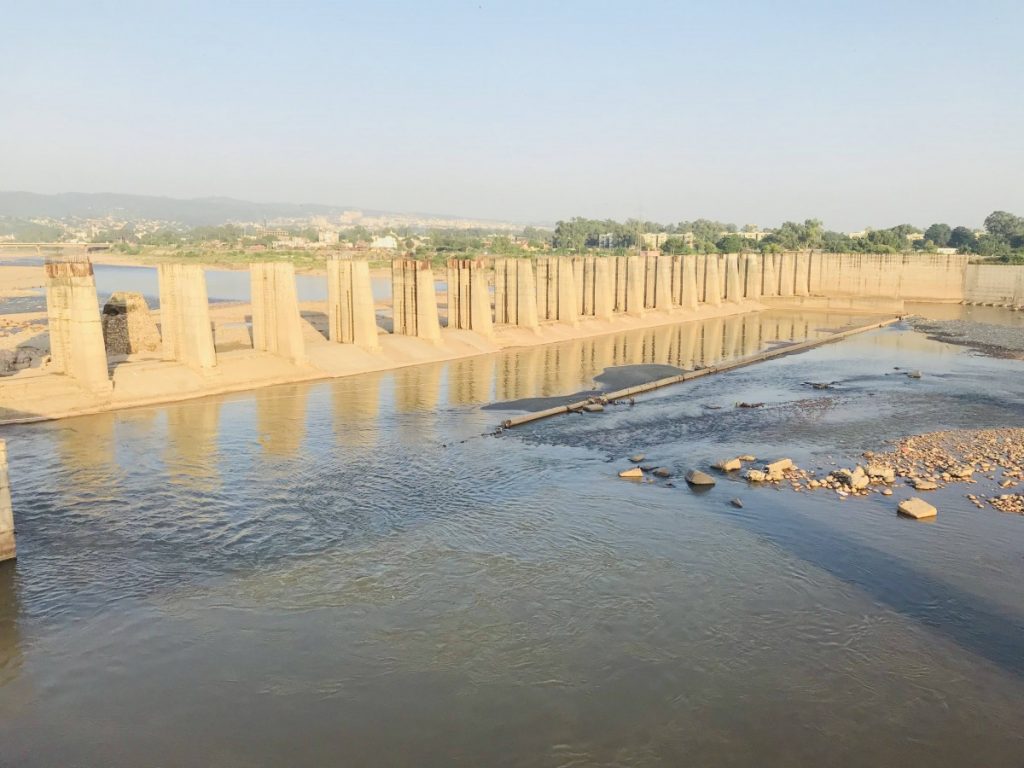 In 2012, a project was launched to build a barrage on the Tawi but it remains incomplete. Credit: Nidhi Jamwal

He is also critical of the Chenab water diversion project. “The Chenab river is known to bring huge amounts of sand and rock particles. Lifting its water, treating and transporting it to Jammu seems both technically and financially unviable. The project may turn into a white elephant,” he warned, suggesting a water-use charge of Rs 1,500-1,700 per household per year be levied to meet the costs.

But the PHE department is confident that the Chenab water diversion project will be successful. “We have advanced technology to implement the project. A sedimentation tank and filtration tank will be built to treat the Chenab’s water and meet the prescribed drinking water standards” Gandotra said.

Meanwhile, the CGWB has undertaken demonstration projects at six sites in the Jammu region to recharge groundwater. These are in Kathua (two projects), Rajouri, Udhampur and Jammu. In Jammu, a gabion check dam was built in 2015 on the Chinota nullah in Khour, in the Akhnoor block of Jammu, which conserves 1,218.75 million cubic metres of water per year by capturing rainwater and replenishing groundwater, the CGWB official said.

A 2013 report of the CGWB also recommended installing rainwater harvesting units to recharge groundwater. If the city’s water crisis isn’t to become worse in the coming decades, with climate change also expected to affect water availability, then state officials must act quickly.

Support for this story was provided through a fellowship under the DFID-funded Informing Change in the Indus Basin Project led by the International Water Management Institute (IWMI). The views expressed are solely those of the author and in no way reflect those of IWMI or DFID.