At a time when carbon-intensive industries such as energy and aviation are highlighted in the fight against climate change, the film industry is yet to get on board with climate action.

Biswajeet Bora’s 2015 Hindi feature film Aisa Yeh Jahaan not only showcased the alienation of urban denizens from nature but also demonstrated that even the film industry can take action to tackle climate change.

The film was India’s first carbon-neutral film. Bora’s desire to make such a film, together with the work of the Centre for Environmental Research and Education (CERE), made the initial inspiration a reality.

The Mumbai-based CERE, a firm that specialises in environmental sustainability, analysed every activity of the film’s production and pre-production (the planning stages before a film shoot) through the environmental lens. The film’s carbon footprint – the amount of greenhouse gas emissions – was calculated by factoring transportation of people and equipment by air and road, catering, set construction, hotels, and so on.

With these calculations, the idea was to remove the same amount of carbon produced in making the film, from the atmosphere. CERE recommended offsetting the emissions by planting 560 indigenous trees of a mixed variety. The plantation was done in parts of Mumbai and Assam, where the film was shot, for under a fraction of the film’s budget. The trees were geotagged and monitored for three years as part of CERE’s Urban Afforestation Project.

Janjri Jasani, head of sustainability services at CERE, said, “Film and television is a resource-intensive industry. It should use resources efficiently to reduce footprint. Offset when you cannot.”

CERE pitched the idea of a ‘Carbon Neutral Film Certification’ to many other production houses. Unfortunately, one more project later, things didn’t move beyond the pilot. Jasani said, “Production houses may have balked at the cost of offsetting or just not have known enough about the subject (climate change and carbon footprint) to take on this challenge. Given the lack of interest at the time, CERE scaled down its focus.” 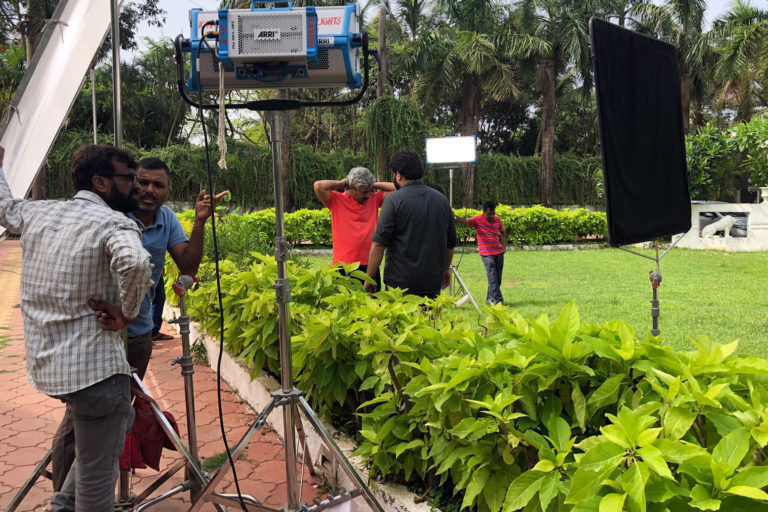 The film and television industry is resource-intensive which uses, among other things, high amounts of energy, produces large amounts of waste and burns fossil fuels through transportation. Photo: Silly Entertainment & Media Pvt. Ltd.

Siddharth Nakai, a sustainability consultant with a television network and founder of Greening Advertising Media and Entertainment (GAME), said, “There are straight guidelines and environmental laws for industries. The film and media industry is not seen as a carbon-intensive industry like a manufacturing plant, but it can have a substantial environmental impact because its energy and fuel consumption are at different stages.”

He too admits that it has been tough to make a breakthrough and bag projects that are looking to become sustainable. But he sees mindsets and convenience as the villain here, not money.

Nakai says that the entire process of film pre-production, production, and post-production (e.g., audio/video editing) can work with some guidelines. “For example, in the pre-production stage, one could use eco-fonts to print scripts and documents. These fonts use less ink and save cartridges. On film sets, rechargeable batteries can be used for audio equipment. That saves a considerable amount of use-and-throw batteries that end up at the landfill and make the environment toxic. Waste segregation and zero-plastic bottles on sets are totally possible. These are small things, but gradually, they save a lot of costs.”

Zooming out to the bigger picture, sustainable practices could reduce the environmental impact of film production, which, among other things, uses energy, generates waste, and burn fossil fuels through transportation.

Unrecycled solid and electronic waste at landfills break down and contribute to methane emissions, which is a more potent greenhouse gas as compared to carbon dioxide. The waste sector contributed to three percent of India’s total GHG emissions in 2014.

A 2006 UCLA study found that the US film and television industry created 15 million tons of carbon dioxide in 1999.

Another challenge to making a process such as a film production sustainable is that production can be scattered across long periods and locations. So, it needs the continuous monitoring and support of all stakeholders involved. Nakai recollected, “I’ve once huddled the entire crew…actors, director, workers on set…and explained the rules and the reasons. But if someone decides not to follow something like waste segregation, the effort collapses.”

There are other ways film productions are trying to make an impact, or rather, reduce it. Cut to Vectar Project, a film-studio in Manchester, United Kingdom that is dedicated to achieving “zero impact filming”. It boasts of an LED-only light setup powered by solar and will build virtual sets with augmented reality to avoid building a physical set. Another proposition is to use an 8K 3D camera setup, which will allow clients and even filmmakers to skip road or air travel to the studio.

Vivek Gilani, the founder of CBalance, a Mumbai-based company that helps organisations manage their carbon footprints, expressed concern that there’s a risk of greenwashing in the process. And if someone sincerely takes up the task, he said, “Instead of focusing on every frivolous aspect (of the film production), we can identify the carbon hotspots and work to reduce those.”

Gilani, who is developing the first India-specific GHG emission factor database and hasn’t consulted on film projects, said, “Like how a film production is seen through the lens of other government permissions, actor A or actor B, location A or B, environmental impact and climate change should be a lens too. But first, evaluating the footprint has to be seen as part of the solution.” 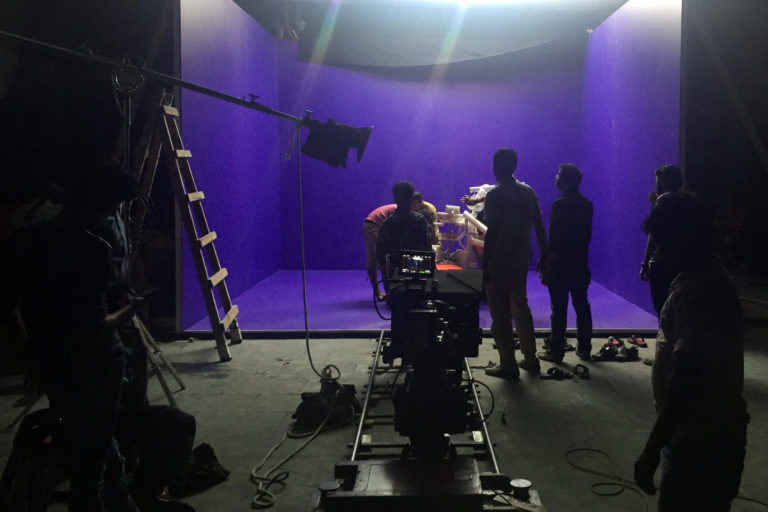 Experts say that the film industry needs to be aware of its carbon footprint and take efforts to take a sustainable path. Photo: Kartik Chandramouli

Jasani concurred that producers are free to offset emissions in the way they like, but the industry accounting its carbon footprint is essential. She said, “Offsetting with trees is a slow process and can take over 15 years to achieve. It has to be done on degraded land and forests and not habitats like grasslands. Tree planting is not the solution for all environmental issues, but they provide a lot of other ecological services.”

As the entertainment industry is projected to grow in India, its resulting emissions and waste are bound to rise too. Gilani said, “The industry should recognise and declare the issue.” He hopes that climate change soon finds its place in film scripts, even if it is not the story. “Someone in the film can maybe miss a flight because of an extreme weather event,” he joked.

There are faces in the film industry who are vocal about environmental issues, and Jasani believes it would be encouraging if they speak up and have conversations about its impact.

“Many would complain that it is for publicity, but as long as the work is done efficiently, the environment benefits. That is what matters,” Jasani added.

This story was published on Mongabay. Read the original here.