Nitin Gadkari needs more than a silver bullet to meet the deadline of cleaning up the Ganga which remains one of Modi’s showpiece schemes. 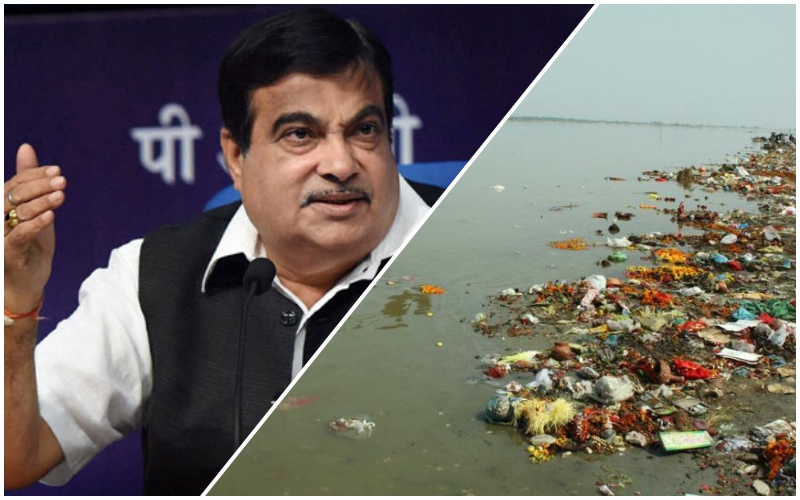 Will Nitin Gadkari, the new minister for water resources, river development and Ganga rejuvenation, be able to deliver in his promise to rejuvenate the dying Ganga river prior to the next general elections especially when his predecessor Uma Bharti had made little progress during the last three years in achieving this Herculean task?

In 2014, when Bharti was given the Ganga rejuvenation portfolio, one of her first steps was to hold a high-profile ‘Ganga Manthan‘ where stakeholders including policymakers, environmentalists and spiritual leaders were invited to put forward their suggestions on how the Ganga could return to its aviral (continuous flow) and nirmal (clean) self.

Gadkari was invited to the meet in his capacity as the minister of shipping, especially since he had shown a great deal of enthusiasm in wanting to build inland waterways to be used for transportation and river cruising. At the ‘Ganga Manthan’, he emphasised the need for the construction of barrages on the Ganga at a distance of every 100 kilometres, for which a proposal had already been sent to the World Bank. Subsequently, at another meet, he corrected himself and said that a barrage needed to be constructed at a distance of every 50 kilometres on the Ganga.

But worldwide, experts have now come around to the opinion that the construction of barrages is extremely detrimental for both the flow of the river and for siltation and flooding. Several experts insist the Farraka barrage is responsible for heavy siltation in the Ganga and for recurrent floods in Bihar. When flood waters entered Patna this year, Bihar chief minister Nitish Kumar asked the Centre to actually decommission the Farraka barrage located in West Bengal. His views have been reciprocated by several members of the parliament from West Bengal.

“The construction of so many barrages will destroy whatever is left of the river,” said river expert Himanshu Thakkar, who is co-ordinator for South Asia Network for Rivers, Dams and People.

Thankfully, so far, we have not heard any statement from the minister on the construction of barrages; but one of his first decisions after being given the responsibility of Indian rivers was to allocate Rs 60,000 crore to Maharashtra to boost irrigation in his home state.

According to the Central Water Commission, Maharashtra already has the largest number of dams in the country, totalling 910, which irrigate only 10% of its land. Only four years ago, the then state chief engineer Vijay Pandhare had written a 15-page note to the state government, warning of how Rs 35,000 crore out of a budget of Rs 70,000 crore for irrigation had been misappropriated during the then Shiv Sena-BJP rule with Rs 15,000 crore seemingly spent on lift irrigation schemes from which only one percent worked.

The Ministry of Water Resources pointed out that although 80% of the river’s water is being diverted for agriculture, our irrigation efficiency, according to experts, is only 15-20% as against 70% efficiency by Israel and 60% by China. Seventy-five percent of water for irrigation purposes is getting wasted.

Work on cleaning the Ganga had gained some momentum over the last ten months with contracts for sewage treatment plants (STPs) worth Rs 2,100 crore having been made under the performance-linked-to-payment model.

A senior official in the Ministry of Water Resources pointed out that presently, ten billion litres of sewage is flowing into the Ganga per day from which 60% emanates from 15 major cities. “If Gadkari can award tenders for setting up of STPs that meet the standards laid down by the Central Pollution Control Board in the next two years, that in itself will be a major achievement,” he said. 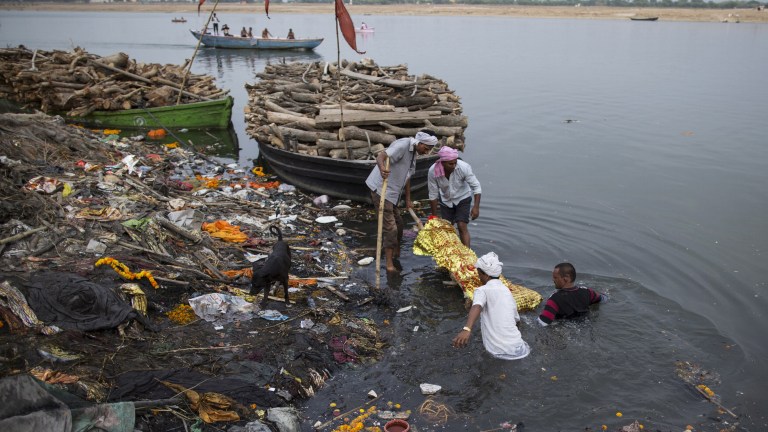 Work on cleaning the Ganga had gained some momentum over the last ten months with contracts for sewage treatment plants (STPs) worth Rs 2,100 crore having been made under the performance-linked-to-payment model. Credit: Reuters

The other matter of concern is the discharge of toxic industrial effluents for which the industry needs to set up online monitoring systems. Although former minister of environment Prakash Jadvekar had inaugurated an online monitoring system for industrial effluents, it has yet to take off, largely because industrialist units in Bihar and Uttar Pradesh find it easier to flout the law and face criminal procedure rather than undertake any serious cleaning up operation.

On the subject of cleaning the garbage being thrown into the river, ministry officials believe the Ganga subordinate legislation, passed in 2016, empowers district authorities to enforce the law but  needs stricter implementation.

Gadkari’s focus is on finance, technology and infrastructure. While such an approach is necessary for the building of roads, this is hardly suitable for the rejuvenation of our dying rivers.

‘Yamuna Jiye Abhiyaan’ convenor Manoj Misra warns, “Seventy percent of our rivers are dead and the remaining will die within the next two years. Between Haridwar and Allahabad, the Ganga has no water in it except during the monsoon months. So many dams have been constructed in the tributaries of the Ganga that their natural flow has been destroyed. Not a single Indian river is presently flowing into the sea and yet the emphasis continues to be on finding engineering solutions.”

Rivers are not simple water channels but are entire ecosystems that carry silt, nutrients and sand and support a myriad of  biodiversity. They also recharge groundwater on which India is presently surviving.

Unfortunately, another calamitous solution being propagated by Gadkari is the interlinking of rivers for which the government has a budgetary allocation of Rs 5.57 lakh crore. He insists that work will start on the Ken-Betwa, Damanganga-Pinjal and the Par-Tapi-Narmada projects by December. Another two on the anvil are the North Koel reservoir project in Jharkhand and the Pancheshwar project in Uttarakhand to be built at the cost of over Rs 50,000 crore.

Another water activist Magsaysay award winner Rajinder Singh is opposed to how the government is wanting to proceed on this Tughlaqian scheme. “These rivers have no water for nine months of the year. Everyone knows the data on river flows of these rivers has been fraudulently increased by officials. Rivers also have their own gene pools. Without understanding this basic fact, the ministry wants to transfer the ‘blood’ of one river into that of another,” Singh said.

Ministry officials are by and large opposed to this scheme. River experts around the world opine that if a river has an adequate quantity of water, biological pollutants will get automatically disintegrated by the action of sunlight on the water.

The Ganga Action Plan Phase 1 and Phase 2, launched way back in 1984, were extremely ambitious projects. Unfortunately, despite thousands of crores spent on this cleaning up operation, the money has gone down the drain largely because they were neither comprehensive in their approach and nor did they go in for appropriate technologies.

Quick fix solutions are not the answer to ecological problems of grave import. The Thames river in London took more than 40 years to be revived. The Rhine flowing through Europe took even longer.

Gadkari needs more than a silver bullet to meet the deadline of cleaning up the Ganga which remains one of prime minister Narendra Modi’s showpiece schemes especially since this is a river that touches the lives of millions of Indians.