The Uttar Pradesh government has introduced an amendment to its Tree Protection Act which directs plantation of 10 saplings for every tree cut or monetary compensation to the forest department to conduct plantation. 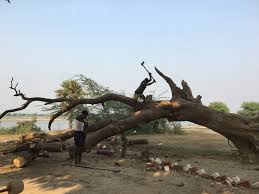 A 2018 photo of tree felling in Gahmar village in Ghazipur. Photo by Kanchan Srivastava.

Reacting to the outrage over a proposal to cut more than 64,000 trees for a Defence Expo in Lucknow, the Uttar Pradesh government has issued new norms to protect trees in the northern state. The amendment to the state’s tree protection act however, has experts and authorities coming out with opposing claims on the sustainability and benefit of the law.

While the government claims the new provisions aim to protect the environment and biodiversity, environment experts say it is too little too late.

The state cabinet approved an amendment to the “Uttar Pradesh Protection of Trees Act in Rural and Hill Areas, 1976”, on December 9, which makes it mandatory to plant and nurture at least 10 saplings for every tree felled. Earlier, under the tree protection law, one had to plant and tend to two saplings in lieu of cutting a tree.

In case of lack of private space for planting the saplings, designated forest land will be provided for the plantation activity, noted the amendment. The amendment also lists a monetary compensation option in place of plantation, under which, those looking to cut trees can deposit equivalent money (approximately Rs. 1,000 for 10 saplings) with the forest department, who will conduct the required plantation.

Additionally, the government has made it mandatory to seek online permission from the forest department to cut the trees of 29 species including mango, mahua, neem, teak, peepal, arjun, banyan, tamarind and jamun which are usually grown by farmers.

These rules will be applicable to all land-owners including builders and other private firms, say officials.

Government departments already require approval by the Centre and are required to undertake mandatory plantation on twice the area they acquire for development works (in case of protected forest) or provide the same size of land along with the cost of plantation at another place (in case of reserved forests) under the Forest Conservation Act 1980. In the case of tree felling in normal forest category, the department is required to plant twice as many trees felled, with approval from the state, as per the Uttar Pradesh Protection of Trees Act, 1976.

The change in the Uttar Pradesh Protection of Trees Act, 1976 assumes significance in the wake of severe air pollution that all major cities in the state are presently facing. For most of the November, air quality index in the state capital Lucknow was between 300 to 500, which is in the “dangerous” category, as per the Central Pollution Control Board (CPCB). Seven of the world’s 20 most polluted cities, based on levels of fine particulate matter PM2.5, are in Uttar Pradesh. In fact, seven cities of Uttar Pradesh were among the India’s 11 most polluted cities last month.

“Trees are our green lungs and double up as a natural water harvester. Tree loss means the loss of a seed bank of indigenous tree species imperative to natural re-seeding over time. They represent an ecological corridor hundreds of kilometres in length for all kinds of bird and animal species. Any re-plantation programmes will not be able to replace such hundred-year-old habitats,” a professor of Botany at Lucknow University says requesting anonymity.

He also points out that historically, roads built centuries ago with big, fruit-giving trees alongside, for the comfort and protection of people, are still the backbone of India’s road map.

However, the governments of today spend a lot on flood and drought relief, natural incidents which are a fallout of continued deforestation.

Also read: India Must Stop Deforesting Its Mountains If It Wants to Fight Floods

Ekta Shekhar, who is the leader campaigner of an environment NGO, The Climate Agenda based out of Varanasi, says, “Had such a policy been brought 50 years ago, it would have helped us to face the climate challenges in a better way. The fresh rules are aimed at commoners and farmers which means the government has shifted the responsibility to maintain ecological balance, to individuals. Individuals don’t chop off trees in big numbers. It’s the real estate giants, corporates and big-ticket projects of the government which eat up large number of trees,” she says.

About 6.09 percent of geographical area of Uttar Pradesh is designated as forest as against the 21 percent nationally, as per the latest Forest Survey of India report 2017.

Students tying rakhi to a tree in Varanasi. Photo courtesy Ekta Shekhar.
The state’s forest cover has gone up by 278 sq km between 2013-2015 due to plantation drives, says the report. Recently, in a much publicised drive in 2019, the forest department claimed to have planted 22 crores (220 million) saplings, setting a world record. Another 9 crore (90 million) and 5 crore (50 million) saplings have been planted in the previous two years, 2017 and 2018, which will reflect in the upcoming survey report. 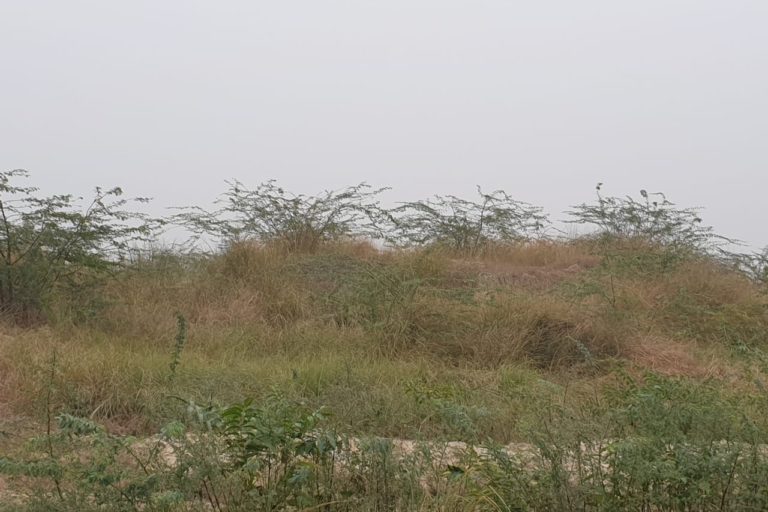 “The statistics are based on satellite images taken by the same forest department which can be manipulated. No organisation is equipped enough to go and verify the claims of forest cover increase,” says Santosh Bajpayi, an environment activist associated with an Industrial Training Institute, Naini in Allahabad.

“First of all, one tree is not equivalent to 10 saplings. The trees which are usually axed are old native varieties with large canopies. They provide shade and are a natural source of fruit and medicine for humans and a vital habitat for thousands of birds and small animals. The saplings take 10-20 years to grow into trees and yet can never establish the same ecosystem,” Bajpayi adds.

He says the new amendment might lead to further afforestation. “People will promise to plant saplings but who will ensure that and how? Not plantation, the actual challenge is to nurture the saplings for at least one summer as eight of the 10 saplings die within a year.”

Many of the environment activists and experts say instead of world record, the government should plant fewer trees and take care of them well. They also demand the government must release the statistics of saplings that survive after a year or two.

Additionally, there are concerns about the monetary compensation option that allows monetary payment to the forest department to carry out the activity of plantation or relocation. Ekta Shekhar says, “Builders and corporates would always find it more convenient to deposit money than relocating the trees.” She emphasises that instead of felling, the government should try its best to ensure relocation of trees especially since the technique is available.

Chandra Bhushan Tiwari, a Lucknow-based activist says, “The governments can never save the environment as their focus will be on haphazard development. High time, people take challenges of climate change seriously and join hands to save every tree and plant new ones or else entire state will convert into gas chamber like Delhi.”

Praveen Rao Koli, Chief Conservator of Forests, Agra Zone, rejects the claims made by environment activists. “The fresh provisions will discourage the tree felling as permission would be required to cut them. Not every application will be granted approval. A complete ban on felling will discourage farmers to plant trees in the first place which will worsen the situation. Plantation on forest land or giving an equivalent amount to the department will help to increase the forestation.”

With regards to survival of saplings, Koli claimed that plantation by the forest departments has a very high survival rate – 50 percent in general, 80 percent in the areas where resources are available and up to 100 percent in the green belt which have protected boundaries.

Even on December 11, two days after the fresh guidelines, forest department has given its nod to Jewar airport project which will wipe out over 6,000 trees. Other projects requiring tree felling also continue A biodiversity park at Noida has allegedly removed 3,000 trees. Some under construction projects like 500-km-long Indo-Nepal Border Road project in the state will also need to axe 55,000 trees.

“Over 2.5 lakh cubic meter forests were cleared in Uttar Pradesh in 2016 which came down to 1.2 lakh cubic meter in 2018 mainly because a huge chunk of forests has already been wiped out for ongoing projects including new highways, expansion of old highways and roads from single lane to two-four-six lanes,” a government official said requesting anonymity.

Officials from the Public Works Department and activists say that most of the axed trees for widening of roads and highways were planted 50 to 200 years ago alongside the roads. This includes mango, mahua, neem, pipal and other native trees believed to be crucial for the environment.