By 2100, 'Record-Breaking Heat' Will Be a New Normal for Every Year

Limiting global warming to below 2°C above pre-industrial levels could reduce the extent of land seeing record-setting heat by almost three quarters. More than half of the world could see new temperature records set in every single year by the end of the century if global warming is not curbed, a study finds.

And new heat records could be set in two-thirds of the world’s least developed countries each year by 2100 under the same scenario, the research adds.

The research “nicely illustrates the pace of change”, another scientist tells Carbon Brief. However, it is worth noting that there are limitations to using climate models to project future temperature extremes, he adds.

Climate change is causing unprecedented heat extremes worldwide. The past four years have been the warmest on record – with 2016 being the hottest year ever recorded.

In 2016, temperatures at the Mitribah weather station in Kuwait reached 53.9°C – the highest ever seen in Asia, according to a recent study.

During last summer’s northern-hemisphere heatwave, temperature records were broken in cities across the world, including Belfast, Montreal, Denver and Kumagaya in Japan. The world also saw its highest ever “minimum” temperature, when a city in Oman experienced a 24-hour period where temperatures did not drop below 42.6°C.

The new study, published in Nature Climate Change, explores how often new temperature records are likely to be set in the future across every world region. Lead author Dr Scott Power, head of climate research at the Australian government’s Bureau of Meteorology, explains to Carbon Brief:

The authors used climate models to explore how often new temperature records are likely to be set – and “smashed” – across the globe. They investigated record-setting heat under two possible future scenarios: one with very high greenhouse gas emissions (“RCP8.5”) and one where global warming is limited to below 2C (“RCP2.6”).

The results show that, under the high-emissions scenario, up to 58% of the world could see a new temperature record set in at least one month every year by 2100.

If the temperature rise is limited to 2°C, a smaller 14% of the world would see new record temperatures every year by that time.

The chart below, taken from the paper, gives a picture of how the percentage of the world seeing record-setting heat is likely to change over the course of the century. 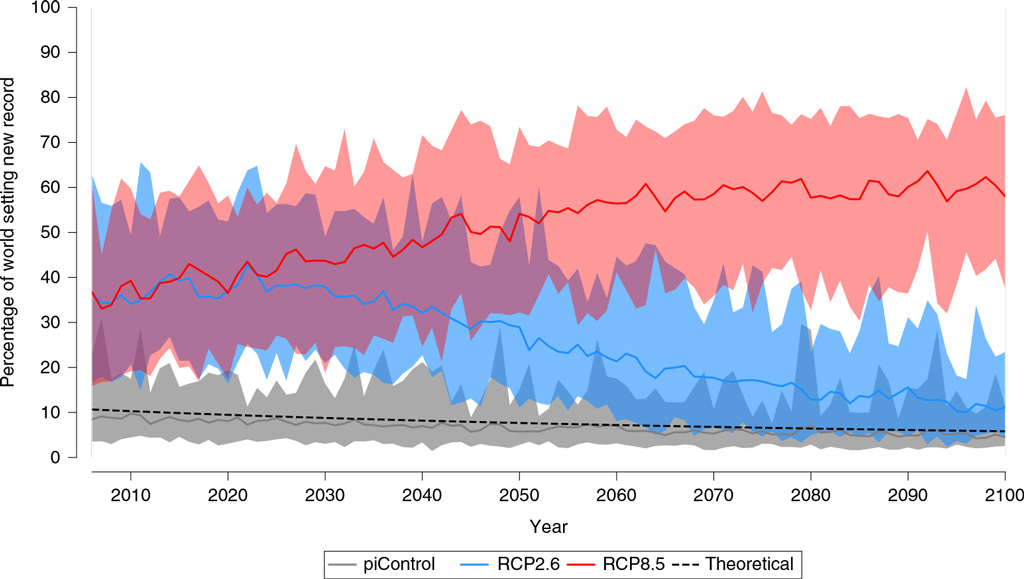 The percentage of the world seeing new temperature records set in at least one month every year from present to 2100 under a high greenhouse gases scenario (RCP8.5; red), a scenario where global warming is limited to below 2°C (RCP2.6; blue) and a “pre-industrial” scenario (piControl; grey). Shading represents the spread of results. Source: Power & Delage (2019)

The blue line shows how the amount of the world seeing record heat would decline as global emissions are tackled and global warming slows. However, in the short-term, record-setting heat is similar in both scenarios, notes Power:

“These benefits take more than 20 years to become clear – the likelihood of setting extreme temperature records is projected to remain at high levels for the next two decades.”

There is a distinction between “record-breaking” and the “record-setting”, the authors point out in their research paper.

Also Read: Explainer: Why All Eyes Are on the Indian Monsoon

The maps below, which are also taken from the paper, give a picture of what regions will see the most record-setting heat in the future period of 2070-99 under a high-emissions scenario (top) and a scenario where warming is limited to below 2°C (bottom). 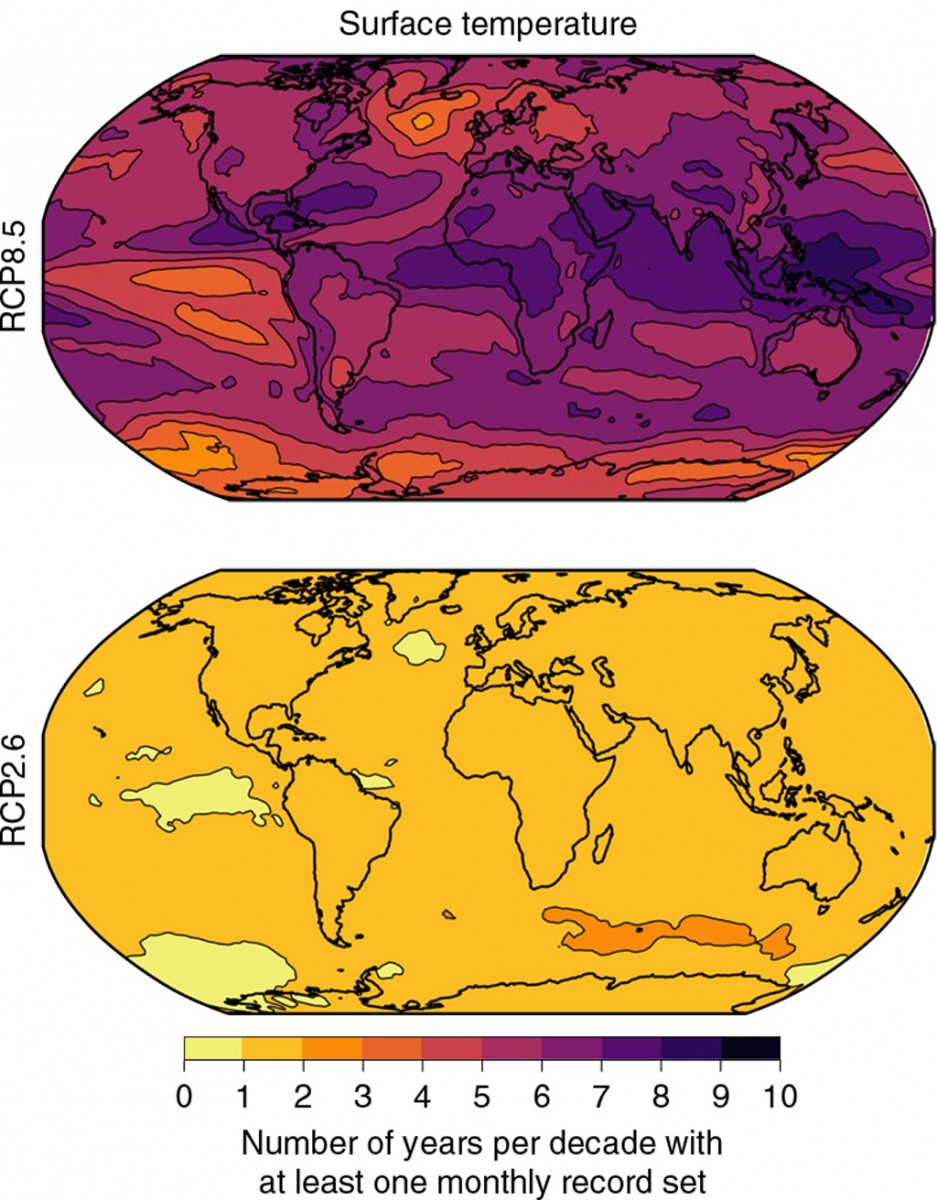 Maps indicating the number of years per decade where new temperature records are set in at least one month in the future period of 2070-99 under a high emissions scenario (top) and a scenario where warming is limited to below 2°C (bottom). Source: Power & Delage (2019)

The results indicate that, under the high-emissions scenario by the late 21st century, tropical regions are likely to see the most record-setting heat.

New heat records could be set every year in two-thirds of the world’s least developed countries under the high-emissions scenario, Power says:

The difference in warming seen across the globe reflects regional variations in ocean and atmospheric conditions, he adds.

The researchers also looked at the future pace of “record-smashing” – when a new record exceeds the existing one by a large amount.

They found that, in any given year until 2100, just under a quarter of the world can expect to see a new temperature record that is 0.5°C higher than its predecessor under the high-emissions scenario. If warming is limited to below 2°C, only 3% of the world’s area will see such record-smashing.

“Changes in the intensity or frequency of extreme climate events can profoundly increase the disruption caused by climate change. The more extreme these events are, the greater the potential to push ecosystems and communities beyond their ability to cope.”

The research is “interesting”, but it is worth noting the limitations of the models used to look into the future, says Prof Piers Forster, climate scientist and director of the Priestley International Centre for Climate at the University of Leeds.

“Also, records in observations are very dependent on local meteorology, which these global climate models don’t capture without ‘downscaling’.

“However, this work is less about the regional or specific details of the records so I’m inclined to trust its broad findings. Looking at continued record setting is interesting and nicely illustrates the pace of change.”

The original article was published on Carbon Brief. Read the original here