India is home to several species of bulbuls and here’s some information on what bulbuls are, where they are found – and what they can really do. The ubiquitous red-whiskered bulbul is a bird you’re sure to have spotted, whether you’re a birdwatcher or not. Photo: Niranjan Venkatesh/Unsplash

Kochi: Bulbuls are in the news – but for all the wrong reasons right now. Considering they average just around 20 centimetres in length and weigh less than 100 grams, it is indeed quite difficult for grown humans to zoom around the countryside on their backs.

India is home to several species of bulbuls and here’s some information on what bulbuls are, where they are found – and what they can really do.

Bulbuls are songbirds, or passerines, like mynas and robins. There are around 150 species of bulbuls across the world, distributed across the Old World tropics. They belong to the family Pycnonotidae and are closely related to babblers, a group of birds also found in the tropics. Bulbuls eat a wide range of foods: some are mostly omnivores, while others are also fruit and nectar lovers.

India is home to 22 species of bulbuls. They are all small birds: they average about 20 cm in length and weigh less than 100 grams.

A few are common garden birds across the country. The ubiquitous red-whiskered bulbul is a bird you’re sure to have spotted, whether you’re a birdwatcher or not. Sporting quirky headgear – a beautiful black crest – and cheeks dabbed with a spot of rouge, the bird is hard to miss also because it is distributed across most of India: from urban gardens and shrubby and green patches in cities, to dense forests and scrub jungles.

They are often a source of frustration for birdwatchers: you raise your binoculars to check out mysterious movements in thickets hoping to pick out a new species to add to your list – but their cheeky crests pop out first, then heads emerge, meeting you with quizzical glares. The red-vented bulbul, another crested species, is also fairly common across the country.

My favourite among these more-commonly sighted bulbuls is the white-browed (you will find them only in peninsular India though). With its camouflaged olive plumage, you will hear it before you see it: this crestless bulbul has a delightful gurgling call which reminds me of trickling water. And once you do sight it, you’ll not forget their distinct white eyebrows that stand out from the rest of their dun body. Data on sightings of the bird uploaded by citizen scientists on eBird, an online database that records information on birds worldwide, shows that the species has been progressively moving its range northwards over the past decade or so, said Ashwin Viswanathan, a scientist with the Nature Conservation Foundation, Bengaluru.

“Areas like [the] Satpura did not have the species in the past,” he wrote in an email to The Wire.

Also read: The Birds Are Vanishing – And We Are Why

But most other bulbul species are rather restricted in distribution. At least 10 species – including the ashy, mountain and flavescent bulbuls – are found only in some parts of northeast India and the Himalayas. You will find the stunning flame-throated bulbul (yes, its throat really does look like it’s on brilliant red fire), square-tailed and the grey-headed bulbuls only in the Western Ghats mountain range.

Observe some of these bulbuls closely and you will see how their appearances lend them very distinct ‘expressions’. Its light blue eyes set against an ashy head give the grey-headed bulbul, for example, a “perpetually surprised” look – like its description on eBird reads.

Some of these bulbul species are also becoming less common, and more threatened. The cachar or Indian olive bulbul, for instance, is among the 101 bird species (out of 867 bird species studied across India) categorised as of ‘high conservation concern’ by the State of India’s Birds, a landmark report on the status of birds in the country published in 2020 based on data derived from eBird. The bird is found only in some states in northeast India.

The report also lists the yellow-throated bulbul as a species of conservation concern in the states of Tamil Nadu and Karnataka. The species also shows a long-term decline in abundance in the Western Ghats where it is found.

But as scientists obtain more data, we are learning more about the distribution of these species. The yellow-browed bulbul – known only as a species restricted to the Western Ghats – also has a population in the Eastern Ghats of Tamil Nadu and Chittoor in Andhra Pradesh, Viswanathan added.

Their limited distributions make three bulbul species – the grey-headed, Andaman and Nicobar bulbuls – ‘near threatened’, as listed by the IUCN Red List. This makes them more threatened than tigers in the wild. The Nicobar bulbul is restricted to just a few islands in Central Nicobar and is one of the most range-restricted species in India, Viswanathan said. The grey-headed bulbul, meanwhile, faces habitat loss and degradation as forests in the Western Ghats are being converted into plantations, reservoirs, crops and human settlements, as per the IUCN. 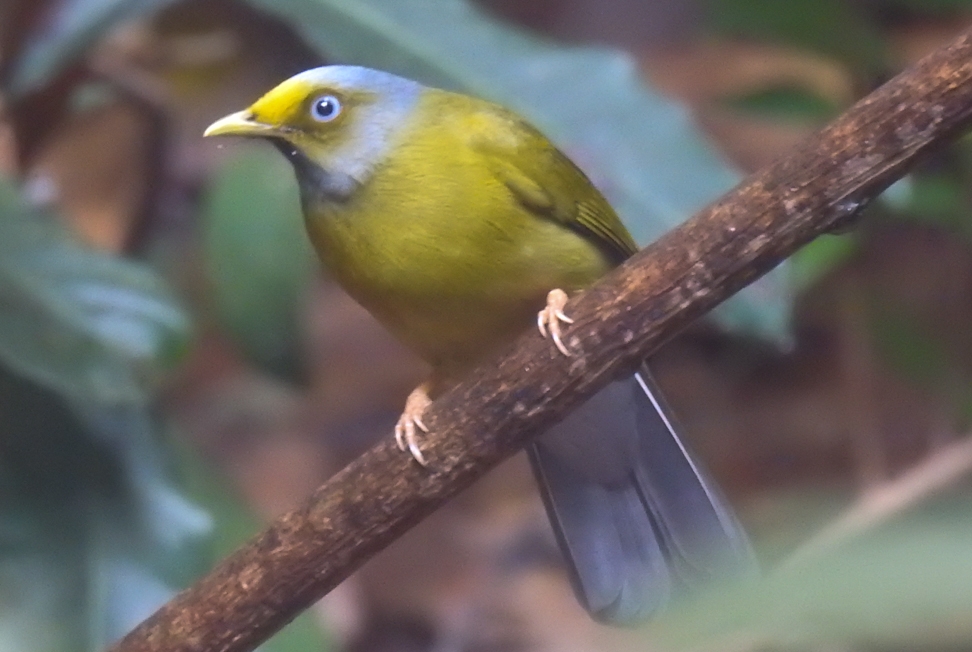 Some bulbuls like the red-whiskered and red-vented have now become invasive species in some countries as a result of caged-bird trade and the resulting accidental introductions. The red-whiskered bulbul, for example, has found its way to Florida, California, and Hawaii. Scientists found in 2018 that the red-vented bulbul, which has been introduced in the island of New Caledonia in the south Pacific Ocean, outcompetes native bird species.