With abandoned borewells turning hazardous for children, farmers in Tamil Nadu are on a voluntary drive to convert them into rainwater harvesting structures. 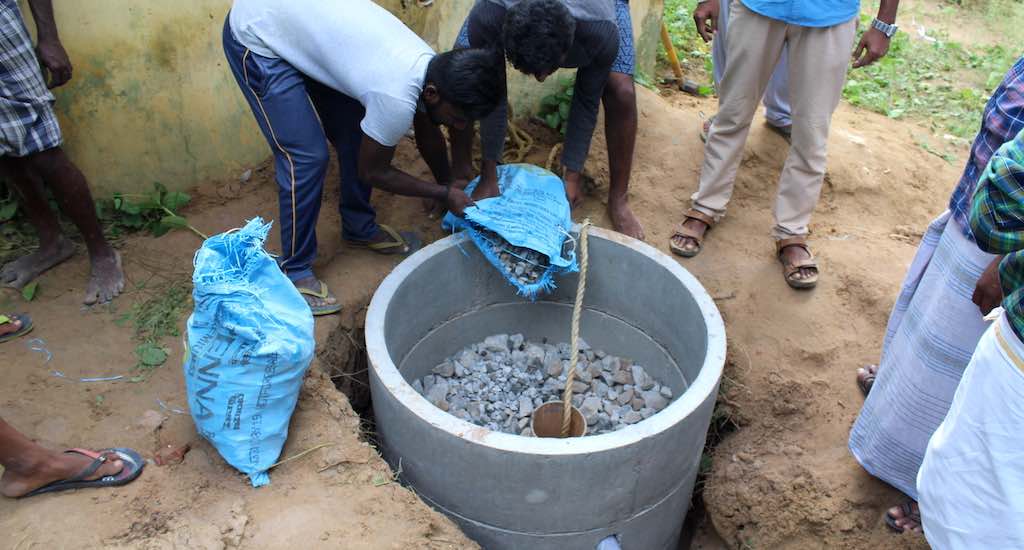 Tamil Nadu was glued to the television this Diwali, watching the rescue of two-year-old Sujith Wilson, who had fallen into an abandoned borewell near his house in Tiruchirapalli district. Unfortunately, he could not be saved, despite 82 hours of rescue efforts.

The toddler’s death was a wakeup call on the need to regulate abandoned borewells in Tamil Nadu. In the past 15 years, at least 10 children have lost their lives in the southern state after getting trapped in unused borewells.

To avoid such incidents in the future, Tamil Nadu Water Supply and Drainage Board (TWAD) passed orders to convert abandoned dry open wells and borewells into rainwater harvesting structures across the state immediately. The state’s IT department proposed a hackathon to find a working model to rescue children stuck in borewells or tunnels.

At Peravurani in Thanjavur district, KAIFA’s core members were busy arranging the logistics for this conversion. KAIFA received over 60 requests within a span of three days, when they announced through their social media page, that they would voluntarily convert defunct borewells. 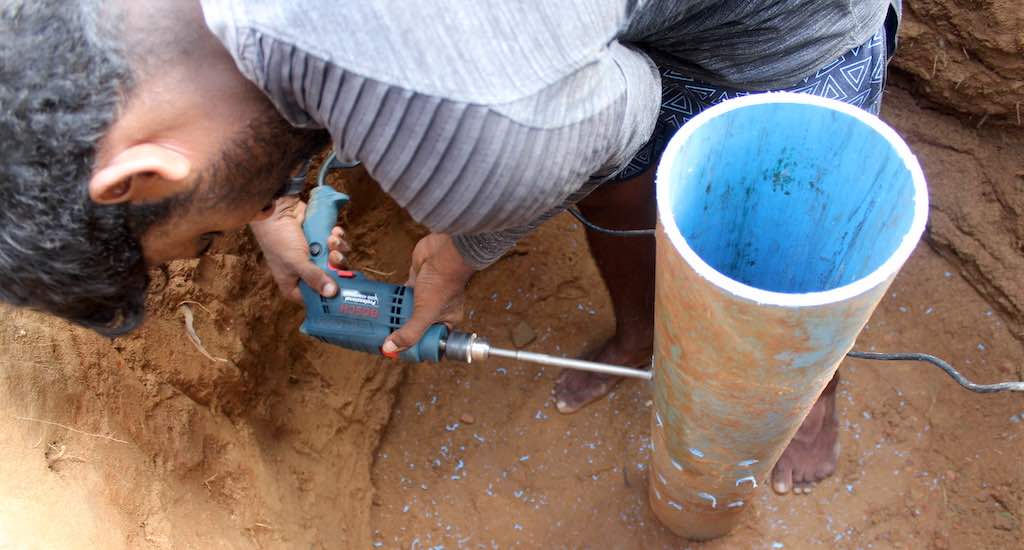 Holes drilled in pipes extending from the bore well help water collected in the pit around the bore percolate and recharge groundwater. Photo: Aadhavan/Village Square

“We have already surveyed 40 wells and plan to convert at least 50 abandoned borewells immediately, at the rate of 3 to 5 per day,” farmer Karthikeyan Veluswamy (40) and KAIFA’s senior member, told VillageSquare.in.

Their first project is in the Thennankudi village in Peravurani taluk. It is a community borewell and the volunteers made arrangements for rainwater from the roof of a nearby e-seva centre to flow into the borewell. Additionally, overflowing water from a nearby water tank was also diverted into the borewell.

The volunteers dig a 3 feet pit around the borewell. Then they drill small holes in the borewell’s PVC pipe visible in the pit. Precast cement rings are then lowered into the pit. The rings are finally sealed together with cement.

For filtration, gravel of 40 mm and 20 mm size are filled in for 15 cm and 30 cm depth of the pit respectively. Rainwater gets collected in the pit, and then slowly percolates into the borewell through the gravel and the holes in the pipe. The pipe is closed with a sturdy cap and the pit is finally closed with a cement lid.

“As of now, we have kept the process fairly simple,” said Nimal Raghavan, a member of KAIFA, while taking pictures to document the sequence of their work. “We might get better ideas and improvise as we progress.”

The second project they took up was that of farmer Velusamy’s individual borewell in Kalathur wherein water from the roof top of his house was to be collected in the 300 feet deep borewell.

Volunteers convert the defunct borewells into an RWH structure in less than 5 hours at a cost of about Rs. 4,500. “Our association bears the expenditure for this conversion; interested people can contribute for individual borewell projects,” said Nimal Raghavan (31).

“We have a very simple and transparent accounting system, where all contributors can track the projects through our social media group,” Nimal Raghavan said.

Chennai-based rainwater harvesting expert Sekhar Raghavan is happy to see that the common man has finally realized the need to invest in rainwater. However, he mentioned that the necessary precautions need to be taken.

“Water from rooftops are fairly clean to use, paved area (like courtyard) runoffs can also be used; as for unpaved area (like lawns) runoff, it would be better to build ponds around the borewell to collect and let the water percolate slowly,” said Sekhar Raghavan. 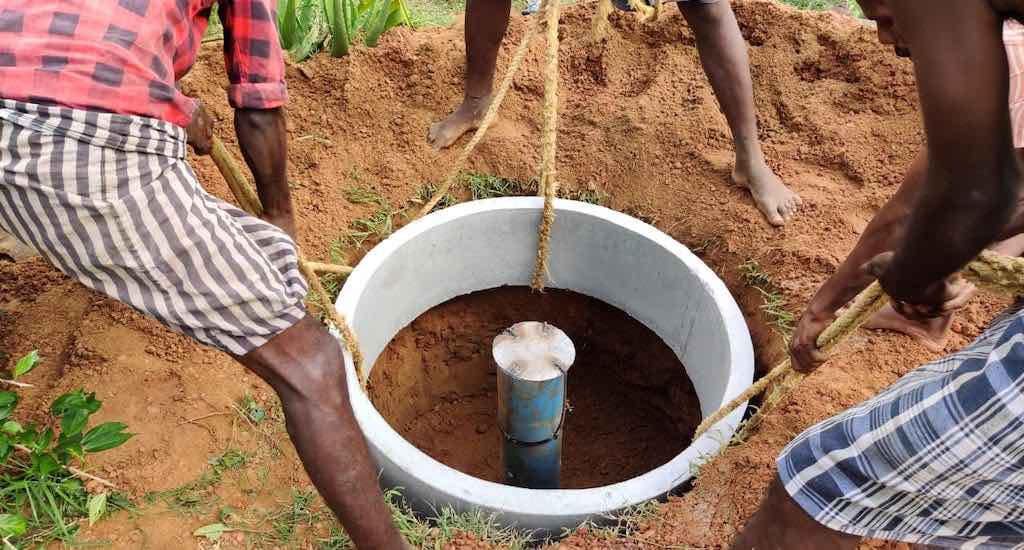 Cement rings retain earth of the pit around the repurposed bore wells, when rainwater gets collected in the pit. Photo: Aadhavan/Village Square

He suggested a filtration system to avoid clogging. He stressed that one should take care to avoid sewage water or pollutants from entering the system. “Recently, an industrial complex near Erode disposed their effluents into a borewell, which is an offence,” he said. “It could pollute the entire aquifer.”

From its end, TWAD has stated that the public or any NGO can seek their help to close or repurpose abandoned borewells through their website or @twadboard, their twitter handle. One can also visit the TWAD board’s regional offices in person for guidance.

“Yes, local people should take this forward in their respective areas,” said Naveen Anandan, founder of KAIFA. He was coordinating borewell conversion projects across Peravurani, Pattukottai, Alangudi, and Aranthangi taluks.

Anandan is overwhelmed by the calls he gets from across the state. “Our team can handle projects in these four taluks; it would be impractical for us to take on projects outside this zone,” he said. “However, we can offer guidance to others.” Volunteers in Thanjavur district said it was difficult to source caps to close the borewells, owing to an increase in demand.

This conversion work has been possible through the support of farmers and youth volunteers like Hariharan (20). A marine engineering student, Hariharan has no qualms about getting his hands dirty for his hometown. He and his friends dug pits, drilled holes and did all the necessary work till they saw the gush of excess water flow into the borewell.

“It gives immense satisfaction to see our work bear fruit. I know people think it’s not cool to take up such manual work but if we don’t take care of our land, who will?” said Hariharan. Sekhar Raghavan agreed that rainwater harvesting is a community initiative.

He said that when more RWH structures come up in a village, the local aquifer will be recharged and the entire area would benefit. “On the other hand, if an individual farmer saves 1,000 litres of water through his borewell, he cannot assume that he will get the same amount of water back,” he said.

Two months back, KAIFA had requested the local administration for permission to recharge defunct borewells, but there was no progress. It so happened that the sad demise of Sujith stirred the state into action. Having been present during the rescue efforts, the volunteers convert the borewells with a purpose.

The article was originally published on VillageSquare. You can read it here.