Spix’s macaw is now extinct in the wild. Conservation programs in Brazil maintain the last 70 or so individuals from this species. 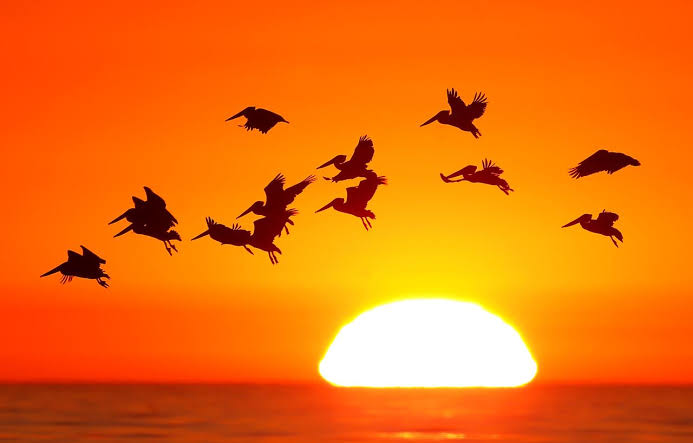 Pelicans silhouetted by a setting sun fly as they look for fish along the California coastline near Leucadia, California November 1, 2013. Photo: Reuters/Mike Blake

Extinction, or the disappearance of an entire species, is commonplace. Species have been forming, persisting and then shuffling off their mortal coil since life began on Earth. However, evidence suggests the number of species going extinct, and the rate at which they disappear, is increasing dramatically.

Our recent work suggests that the rate at which species are going extinct may be many times higher than previously estimated — at least for birds. The good news, however, is that recent conservation efforts have slowed this rate a lot.

For decades, palaeontologists have used fossils to estimate how long different species persisted before dying out. The discovery of a new fossil species gives a minimum estimate of when the species might have first evolved. The absence of the same species later in the fossil record signifies its probable extinction.

Though the methods are woefully imprecise, researchers have estimated that the average lifetime of a vertebrate species is between one and three million years. Many species are at the lower end of this range, while a few species persist many millions of years longer. For comparison, our own species, Homo sapiens, has been around for less than 500,000 years.

Such estimates can be compared to what is happening now. Conservation biologists estimate current extinction rates using historic, documented extinctions. For instance, since 1500 — just after Columbus’s arrival in the Americas — 187 of the roughly 10,000 bird species have gone extinct worldwide.

Also read: There Are More Peafowls in Kerala. Is It Because of Climate Change?

Some simple math based on the average duration of fossil species predicts that only two to five bird species should have been lost since 1500. If the fossil data suggests a bird species will persist for three million years before going extinct, a species living in 1500 could be expected to survive for 30,000 years. In other words, a hundredfold drop.

This is the sort of calculation that supports the argument that we are approaching a “sixth mass extinction,” rivalling times in the past when extinction rates were orders of magnitude higher than the long-term average.

However, a high historical extinction rate based on data from the past few centuries may not be helpful. Using the historical extinction rate to predict current rates of extinction is similar to using car crash numbers for Model T Fords in the 1920s to predict deaths on the road in the 2020s. Many more cars hurtle down the road much faster today than they did 100 years ago. But in contrast to the 1920s, cars today sport airbags and other safety features.

Almost 80 per cent of historic bird extinctions were on oceanic islands like Hawaii, Madagascar and New Zealand, and often due to our unwitting importation of rats and snakes. Current threats include habitat destruction and climate change. And, akin to airbags, we are now much more interested in, and able to attempt, active conservation.

Using the same reasoning as before, we studied the number of species that change their status. But instead of considering extinct versus living species from long ago, we considered all levels of endangerment (the entire escalator of decline that moves species closer to extinction), and more recent data. We used numbers from the International Union for the Conservation of Nature’s Red List for all 10,000 bird species from four time points.

The Red List gives each species a threat rating based on the likelihood that it is at risk of extinction. There are six ratings in total, starting with least concern (8,714 species in 2016) and moving through critically endangered (222 species) all the way to extinct in the wild (five species).

We started with the initial records from 1988 and compared them to subsequent updates taken every four to six years. My co-authors – comparative biologist Melanie Monroe and Stuart Butchart, chief scientist at BirdLife International — tallied the number of species that remained in place, rose or descended the extinction escalator decade over decade. Using those numbers, applied mathematician Folmer Bokma calculated a current average rate of extinction — the chance an average species would go extinct in any given year.

The vast majority of species moved down the endangerment escalator. That means that they are at higher risk of extinction today than they were previously. So the final average rate of extinction was high.

These results are surprisingly dismal, but we also found an encouraging pattern. We calculated the overall impact of conservation activity on rates of extinction by including or excluding improvements in risk status due to conservation efforts. Without conservation, our estimate of a 5,000 year future for living species would have dropped to 3,000 years.

This raises an interesting challenge. It is clear that we can bring species back from the brink of extinction, and many countries engage in last-ditch efforts.

But we also know that 11th-hour intervention is expensive. For instance, in British Columbia, the government recently earmarked nearly $30 million to try to protect the few remaining caribou in the province. We have known for decades that B.C. caribou have been declining, and extreme intervention, like shooting wolves from helicopters, seems, well, desperate.

And this desperation is unnecessary. If we want to conserve particular species, we need to target them early. This means we need to pay more attention to species that are not currently critically endangered.

We must identify the species that we want to keep around and that are unlikely to deal well with the world we are creating (or maybe more accurately, destroying) for them. Importantly, these species may currently be assessed as merely vulnerable, or even of least concern. We need to get them off the extinction escalator. It bears repeating: an ounce of prevention, a stitch in time.