What holds the egg together and gives it shape? One might think it's the shell, but even after removing it, the egg continues to maintain its shape. 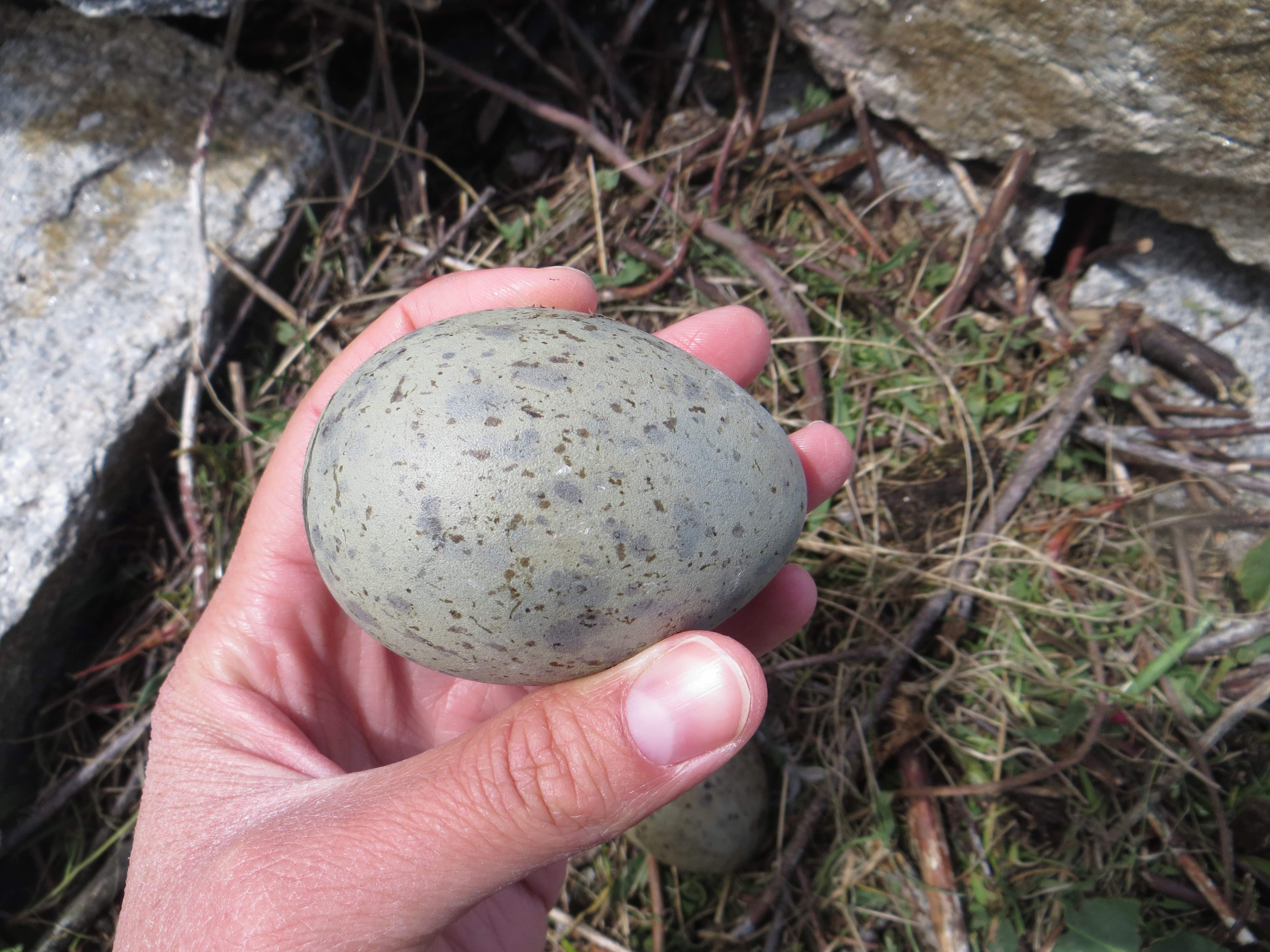 The shape of bird eggs varies a great deal. Brown hawk-owls lay cantaloupe round eggs. The Indonesian maleo’s are water melon-shaped. Least sandpipers’ drop avocado-like ones. What purpose does this diversity of forms serve?

In 1966, Neal Smith, staff scientist at Smithsonian Tropical Research Centre in Panama, explained the teardrop shape of gull eggs. These ocean-faring birds nest on rocky cliffs, where the danger of round things rolling over the edge is high. So their eggs, weighted at one end, roll in a tight circle if knocked. Another theory suggested the pointy ends of such eggs fit better under the brood patch, a featherless area on the belly, of incubating adults. Which raises the question: if conical eggs can’t roll over precipices, why are some seabirds’ eggs less weighted at one end? Why do they compromise on the survival of their eggs? Yet another said the number of eggs laid at one time changes their shape. But no single theory so far provided an overarching interpretation. 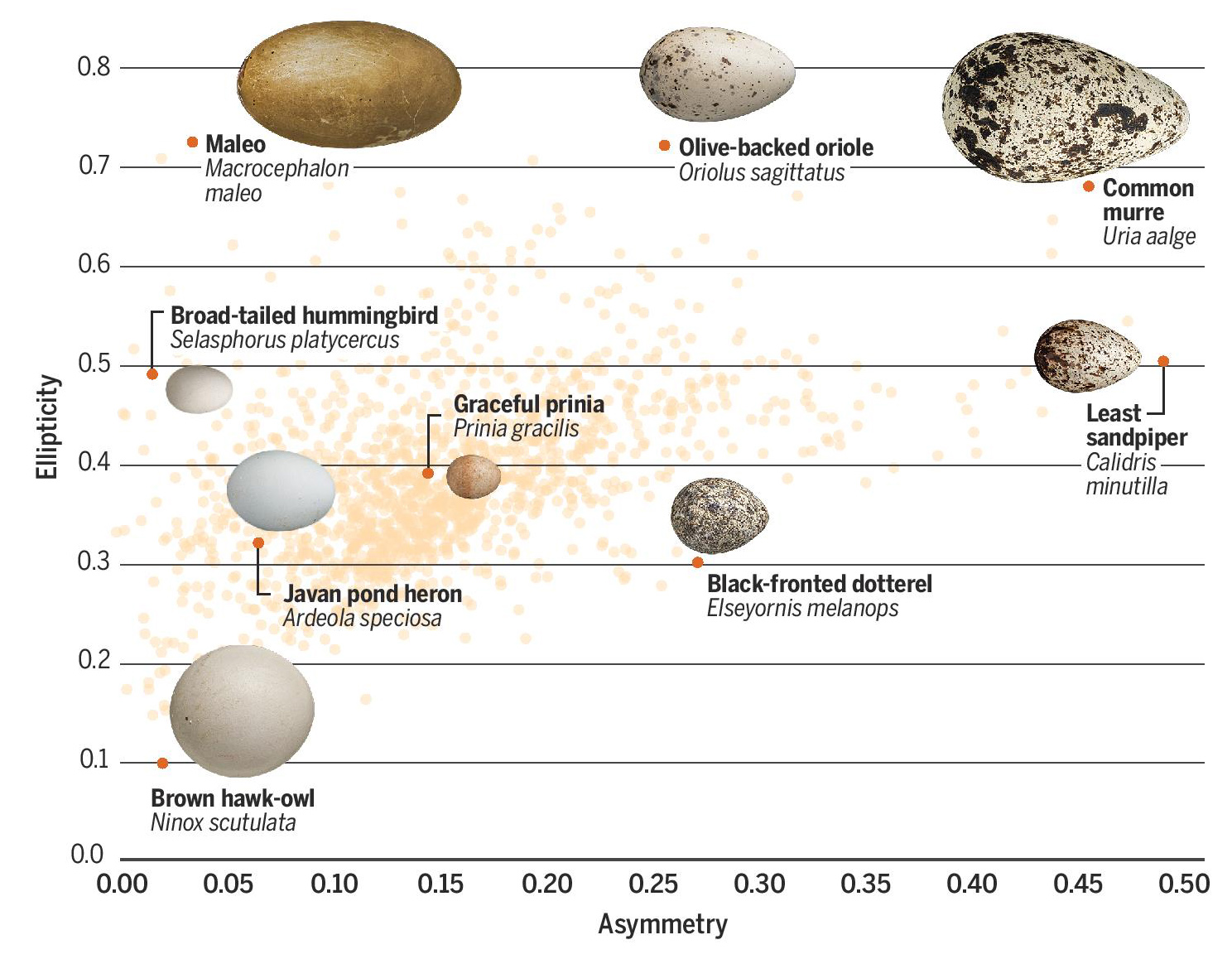 “I think bringing together different perspectives on egg shape, from formation to function, allowed us to explore the evolution of avian eggs in a new and synthetic way,” Mary Caswell Stoddard, an assistant professor at Princeton University and lead author of the study, told The Wire.

Stoddard’s team analysed a whopping amount of data from 50,000 eggs of 1,400 bird species, both extinct and living. By rating egg shapes according to asymmetry and length, the researchers discovered they occupied a continuum from round to oval to conical. This contradicted earlier studies that had categorised eggs into distinct classes based on limited samples. Bang in the middle of the broad spectrum is the graceful prinia, a drab warbler-sized songster found in parts of North India. Its eggs are neither too round, too conical, nor too long. Most eggs conform to this shape rather than to the familiar chicken egg.

What holds the egg together and gives it shape? One might think it’s the shell, but even after removing it, the egg continues to maintain its shape. The authors propose the soft, double-layered membrane holds it all together. So pressures acting on this membrane probably affect the final shape the egg takes. The egg absorbs water when it develops the shell casing, creating internal pressure. External strains press against the membrane, too.

What could these pressures be? The researchers developed a hand-wing index to rate flight efficiency and correlated it to egg shape. Birds with narrow pointed wings, like swifts and sandpipers, rank high on the index than ones, such as owls, with short wings and rounded tips. Strong fliers, the ones with a high index score, tend to have oval or conical eggs.

“We discovered that, on a broad scale, egg shape is related to flight ability in birds,” says Stoddard. “We think that birds, to maintain sleek bodies for flight, have evolved elliptical and asymmetric eggs to increase egg volume without increasing egg width – this is advantageous for narrow, streamlined bodies.”

As birds evolved from small terrestrial bipedal dinosaurs and took to the skies, their bodies lost bulk and became more streamlined. It also restricted how wide the oviduct can stretch. But the birds can’t shrink the size of their eggs to match the width of the reproductive canal.

The volume of an egg depends on the state of the newly hatched chick’s development. Nestlings may be born totally helpless, able to walk and swim but fed by their parents, follow their parents and find their own food, or completely capable of looking after themselves. The more developed a newly hatched chick, the larger its egg.

Credit for all images: Harvard Museum of Comparative Zoology

Narrow oviducts squeeze the membrane of large eggs as they pass through making them more asymmetric (conical) or elliptical (long). Indeed, the eggs of flightless birds like kiwis and ostriches tend to be round or oval without a pointed end. However, penguins lay conical eggs even though they don’t fly, but they are energetic streamlined swimmers, which may place similar pressures.

“This paper is unusually thorough and thoughtful,” says Bob Montgomerie, a professor at Queens University, California, who wasn’t involved with the study. “Many scientists jump to the conclusion that the correlations they describe are the direct result of adaptations of one trait (shape) to the other (flight). In this study, though, the authors make the excellent point that adaptations for flying efficiency most likely constrained egg width. There are many results in this paper, and in every case the authors make thoughtful but cautious interpretations, realising full well that correlation does not mean causation and that further data and even experiments are needed to verify their conclusions.”

In a commentary published in association with the study, Claire Spottiswoode, University of Cambridge, writes, “Their paper opens up a rich seam for researchers to explore.”

Stoddard says her team plans to investigate differences in eggshell membrane properties across birds, from ostriches to hummingbirds. “We would like to see if what we observe in these membranes is consistent with the predictions of our mechanistic model. In addition, we are eager to explore how eggs changed shape at the dinosaur-to-bird transition. We believe that both egg asymmetry and flight evolved roughly during this time, raising the intriguing possibility that the emergence of powered flight is associated with egg shape variation.”

If the adaptations for flight efficiency mould egg shapes, “we might expect that there will be a cost to having eggs that are constrained in their shape,” Montgomerie says. “I would like to know what that cost is.”

Next time you see an egg, remember it’s the marvellous result of complex evolutionary processes balancing the needs of developing embryos with their parents’ ability to stay aloft.

The study was published (with an illustrated summary) in the journal Science on June 23, 2017.