Tamil Nadu continues to witness cycles of flood and drought annually. Mismanagement of traditional water management systems is one of the main reasons. 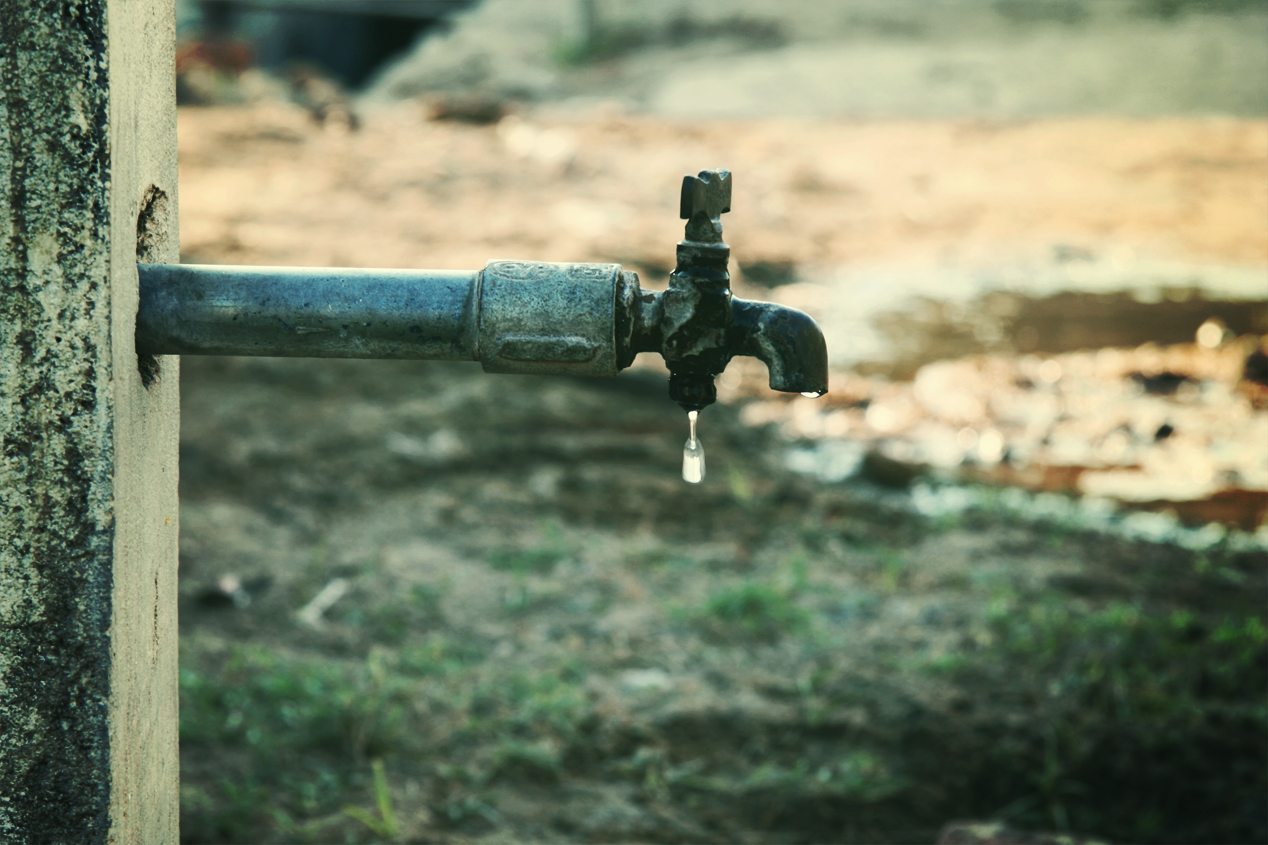 Tamil Nadu: That Tamil Nadu qualifies to be dubbed as a land of climate paradoxes is beyond debate. The massive flood of 2015 was quickly followed by a punishing drought in 2016. Though the state benefited marginally from the southwest monsoon, as is usually the case, the biggest letdown was the manner in which the more dominant northeast monsoon panned out. Tamil Nadu wound up with a paltry 168.3 mm of rainfall during the northeast monsoon season as against the normal 440.4 mm, leaving the state with an overall deficit of close to 62% of the long-term expected average precipitation.

From Cauvery to Kollidam, innumerable dams and irrigation channels remain bone dry in the delta districts. Most reservoirs reached dead storage levels from the Vaigai dam in Madurai to the Manimuthar dam in Tirunelveli down south. As a consequence, around 102 farmers, mostly farm labourers and marginal farmers, have either taken their lives or suffered fatal heart attacks owing to crop losses.

But are poor monsoons alone to be blamed for Tamil Nadu’s predicament? Not really. The state is neck-deep in crises ranging from tricky interstate water sharing disputes to wretched centre-state relations that caring for and sustaining local water resources often takes a backseat.

The clamour for declaring Tamil Nadu drought-hit commenced in late December 2016 when the state recorded deficits close to 70% of the long-term average and the massive wind cyclone Vardah offered little help.

While the Cauvery dispute and the impish northeast monsoon hogged the limelight, a more serious trouble which has been brewing for years remained on the backburner. Tamil Nadu is one of the country’s top groundwater guzzlers with 142 out of the total 385 blocks classified as over-exploiters of underground water sources. This means that the extraction of groundwater outstrips recharge, resulting in severe resource crunch. In addition, another 33 blocks have been termed critical while 57 remain semi-critical.

Professor S. Janakarajan from the Madras Institute of Development Studies (MIDS) points out that 80% of all drinking water needs and 70% of gross irrigated area in the state are solely dependent on groundwater. In addition, 90% of industries depend on underground sources to satisfy their water needs. This cements the fact that groundwater is currently indispensable, playing a pivotal role in sustaining both rural and urban economy.

“Given the current situation, conservation of groundwater should be accorded utmost importance. But what we see today is a grave mismatch between extraction and recharge, with the former far exceeding the latter. And this has been escalating by the year.” Janakarajan goes on to explain that unmindful depletion of this crucial resource will result in desertification, further stifling water-intensive agricultural systems practised in many places across India.

The best way to insure against water scarcity and future desertification, he says, is to maintain and protect small water bodies such as tanks, lakes and ponds- something Tamil Nadu is blessed with. Every village has 15-20 small water bodies such as irrigation, drinking water and cattle ponds. Including large irrigation tanks, the total number of water bodies exceed one lakh in the state. These surface water bodies, in addition to holding water, help regulate local microclimate and crucial groundwater recharge. “Essentially, protection and maintenance of small waterbodies is a type of local insurance against drought and hence should be taken up in earnest,” asserts Janakarajan.

This is backed by positive feedback from Madurai-based development organisation DHAN Foundation’s watershed management work in the Gundar basin, one of the driest river basins in the state. Tanks which were once widely used for irrigation all over Tamil Nadu have since fallen into disuse owing to a variety of factors from improper maintenance to large scale encroachment. However, all hope is not lost.

Chief executive of DHAN Vayalagam (Tank) Foundation, A. Gurunathan, explains that the places where tank rehabilitation works were taken up, dug wells retained a considerable amount of water and helped in cutting losses. The foundation, along with Hindustan Unilever Limited and National Bank for Agriculture and Rural Development, was involved in rehabilitating 255 tanks in the Gundar basin between 2008 and 2013, the results of which are becoming apparent now.

“When tanks are desilted and maintained well, not only is water available for irrigation but also helps in groundwater recharge. This was evident in villages in the Gundar basin where, even after a failed monsoon, many individual dug wells retained water and helped augment water supply. This was observed in areas around 34 tanks which were taken up for rehabilitation earlier,” remarks Gurunathan.

An assessment is currently underway to determine the impact of such restorative efforts. The results have been very promising. Studies around three of the rehabilitated rain-fed tanks in Alankarakulam, Kudipatti and Puliakulam have revealed that despite deficient rainfall, farmers were able to cultivate crops such as maize, chilli and sorghum owing to enhanced groundwater levels, thanks to the monsoon recharge in the past two years.

When chief minister O. Panneerselvam declared Tamil Nadu drought-hit in early January, Rs 3,400 crore was set aside for desilting and restoring water bodies in addition to a slew of measures to minimise farm distress. Essentially, maintenance of tanks and ponds should be carried out through the year and not be announced as a hurried response to a prevailing drought situation.

Instead of compartmentalising flood and drought, there is an urgent need to examine both phenomena in unison. If we had bothered to desilt and take care of tanks before the 2015 monsoons, the drought that followed could’ve been mitigated, Janakarajan rues. The state’s most recent drought, he says, only exhibits official lethargy and absolute lack of will and commitment.

Due to inadequate storage and recharge arrangements, 300 TMC feet of water got drained into the sea just from Chennai during the massive deluge of 2015. Ironically, the state has been pleading with the neighbouring Andhra Pradesh for 2.5 TMC feet of water to be released from Krishna to quench the city’s thirst. As per the Inter-State Agreement signed between the governments of Andhra Pradesh and Tamil Nadu in 1983, the former is obliged to release 12 TMC ft of water from the Kandaleru reservoir to satiate the water requirements of the completely monsoon-dependent state capital, Chennai.

But is scarcity a whole different animal in urban areas? Chennai-based activist Sundar Rajan explains that earlier, the core difference lay in the manner in which water was viewed in the rural and urban contexts. Demarcation of water use for varied needs was more prominent in rural areas. For example, the manner in which ooranis or drinking water ponds were cared for differed from the way cattle ponds and irrigation tanks were maintained and managed. But the strict distinction which existed earlier is slowly becoming hazier with time and it is not uncommon to find villagers purchasing drinking water today.

In addition, peri-urban and rural areas are compromised to quench cities’ thirst. The best example is that of the new Veeranam water supply project which was commissioned in 2004 to supply Chennai city with water all the way from Veeranam Lake, located around 235 kms south of the city in the Cuddalore district. The lake is a part of the Cauvery cascading tank system; as the flow from the Cauvery reduces, inflows into the tank reduce too. When water meant for local farms is diverted away to feed the city, the effects on local livelihoods and farm incomes can be damaging, something which farmers around Veeranam are currently experiencing.

Sundar Rajan reveals a rather disturbing detail about the recently restored Chetpet lake in the city. Tankers were lining up on a regular basis to empty lakhs of litres of water from peri-urban borewells into the lake to save face and keep the boats, a major tourist attraction, afloat on the lake. This, despite the fact that long-term restoration plan of the lake like watershed area care and upkeep of inlet drains are in the doldrums. All that the authorities seem to care about is the beautification of the lake to keep the tourist count growing. “This is the level of understanding and ingenuity we have to deal with these days. The absolute lack of regard for natural systems and the way they function,” says Rajan.

There is no denying that as a society we have facilitated the collapse of traditional water management practices and systems over the last few decades. But the erosion is more prominent in urban areas where we have lost a considerable number of tanks to encroachments, making city dwellers hopelessly dependent on centralised water supply bodies such as metro water boards and city corporations. Waterbodies should be viewed holistically and plans should be drawn in a manner respecting the ecosystem services they provide and the many biological systems they support. Unless conservation practices, geographical and hydrological concerns are rigorously incorporated in policy documents, the repetitive cycle of flood and drought will be hard to demolish.