Behind Façade of Clean Mountain Towns, Kullu and Manali Struggle to Manage Waste

Authorities blame the surge in tourism for mounting waste, thus sidestepping issues of rise in domestic consumption and lack of effective management. 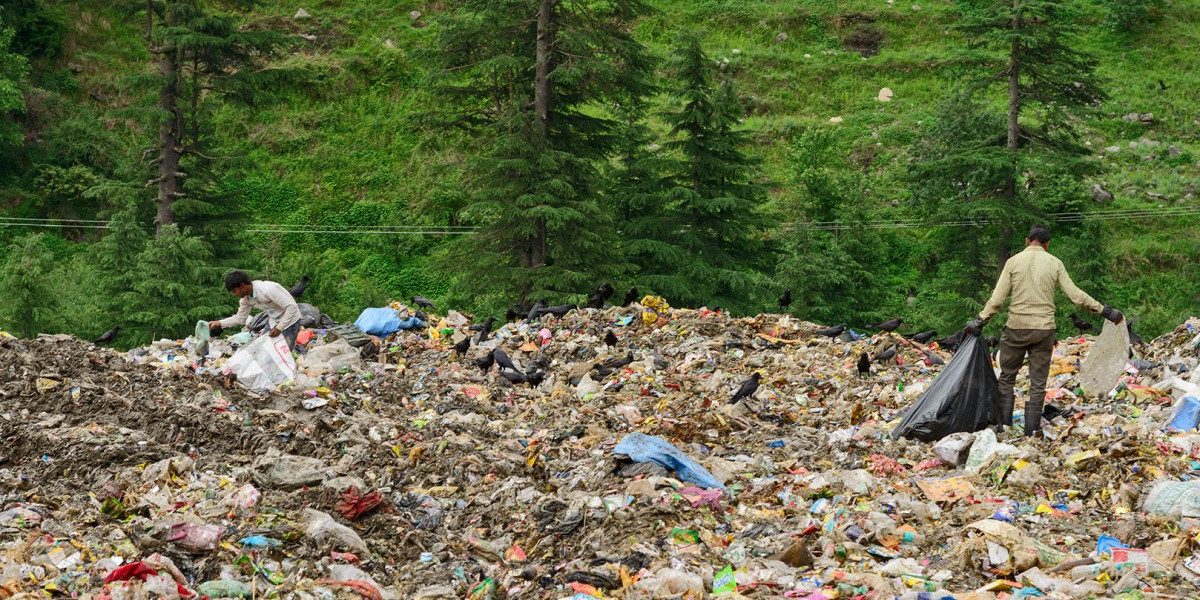 Informal waste collectors pick out items of value from the dumping site to be sold to scrap dealers, working in highly unhygienic conditions with little or no safety gear. Photo: Kanika Bansal

The mountains today are entangled in several processes of change. The everyday here is a constant negotiation between the ‘traditional’ and the ‘modern’. Kullu in Himachal Pradesh, where I was born and currently live, has undergone significant socio-economic and cultural shifts, especially in the last four decades. People’s incomes have risen and the market has become an integral part of the everyday. Different kinds of consumer goods have percolated into our lives, leaving Kullu a waste-generator.

While we value our ability to consume, we despise the rubbish this very act of consumption produces. Given the visibility of waste due to lack of proper management mechanisms, it has become a site of both anxiety and conflict in the two municipalities of Kullu and Manali. Authorities blame the surge in tourism for mounting waste, thus sidestepping issues of rise in domestic consumption and lack of effective management.

As urban local bodies, Kullu and Manali are struggling to manage their waste. Unsegregated municipal solid waste is transported to the landfill and sits there untreated. However, in May, Manali’s municipal council issued notices stating that from April 1, it will collect only segregated waste.

The council considers this necessary to prepare the people for a waste-to-energy plant coming up in the area despite a policy that calls for decentralisation of waste systems. The plant is a capital-intensive fix, if that.

A project official says it is the first of its kind in India and only the second in the world after one in Australia. The plant aims to produce 35 tonnes of refuse-derived fuel from 100 tonnes of waste per day, all of which will be used to generate electricity.

According to the Manali municipal council’s data, the town generates 35.2 metric tonnes of solid waste per day at the peak of tourist season – May-June – and 14 metric tonnes per day for the rest of the year. Biodegradable waste is estimated to make up 25% in both seasons. 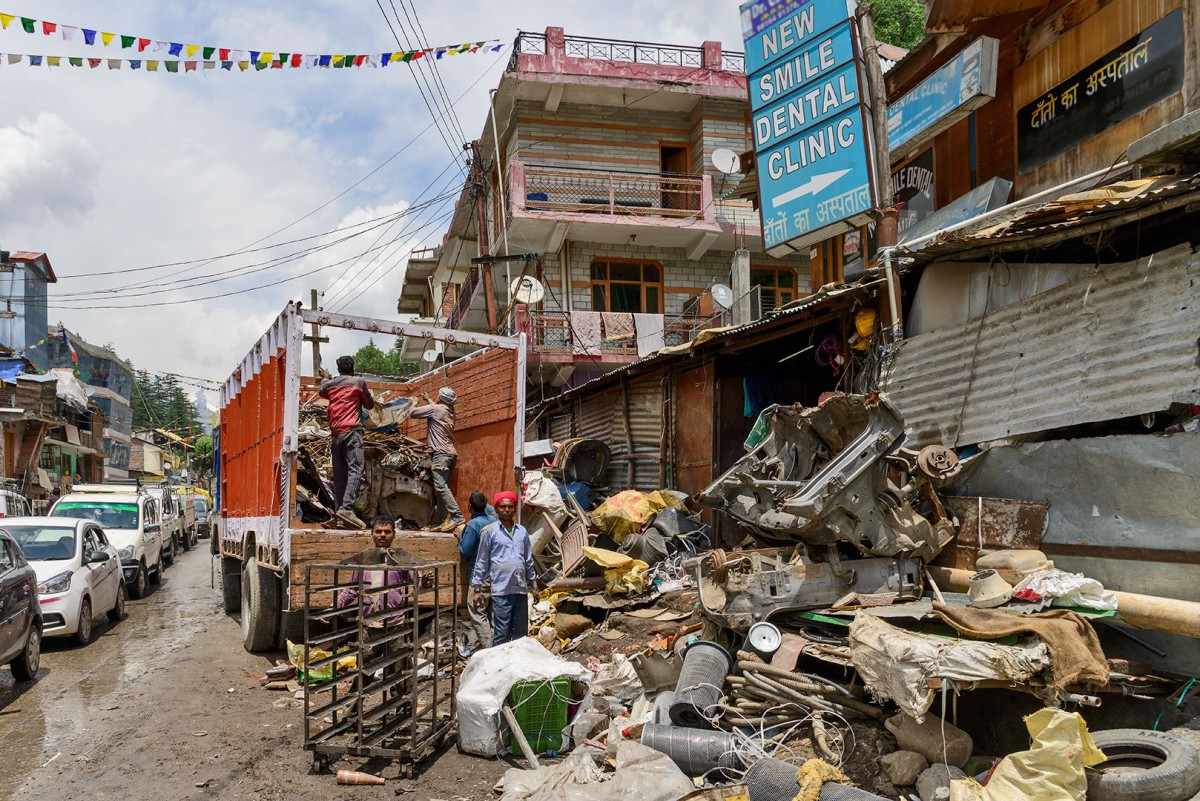 After segregation and compression, recyclable items are loaded onto a truck and transported to recycling plants elsewhere in the state, or to Chandigarh and Delhi – wherever scrap dealers are able to extract the best price for the waste. Photo: Kanika Bansal

However, council officials themselves aren’t sure. “We do not reach the 35 tonnes capacity in high season,” one said. “To say the truth, we haven’t conducted any ‘scientific’ survey to understand the waste composition of the town.”

In 2017, the town’s municipal council could no longer overlook the overflow at the existing Rangri landfill, about 2 km outside the town, and made several attempts to find a new site. All nine panchayats outside the council area refused to grant land.

Waste is a contentious subject in Kullu as well. The council of Kullu and the deputy commissioner’s office have been negotiating with local panchayats since 2002. Kullu’s trash used to be dumped at a site in Pirdi village, but after a while, panchayats in and around the settlement protested and a local resident filed a writ petition in 2012.

Five years later, the National Green Tribunal ordered it shut. The council was asked to identify a new site within two weeks, and also ordered the existing waste cleared. But the council only flouted it and truckloads kept coming in, including biomedical waste from the adjoining district of Bilaspur.

In fact, the story of the Pirdi landfill goes back to 1996. It was originally the site of a designated incinerator, and officials had obtained permission by promising local development projects. The Balh panchayat granted the Kullu council a ‘no objection certificate’ in 1996 explicitly stating that the okay was contingent on the waste being dealt with ‘appropriately’. In return, the council offered street lights, a park and a cafeteria in five of the 20 bighas.

However, officials had grossly underestimated the amount of waste that would come in and soon there was a mountain of it.

“We wouldn’t have faced this problem today if only the waste [had been] properly managed by the municipality,” Joginder Singh, a resident of the Balh panchayat and president of the forest rights committee, said.

The tipping point came in 2018, when the stench from the landfill became unbearable. In September, all 11 panchayats embarked on a month-long dharna and blocked the road to the landfill site. The protesters also familiarised themselves with rights granted under the Forest Rights Act, and subsequently the forest rights committees asserted that their rights to clean environment and good health were being violated.

Caught in an impasse, the Kullu council approached the Supreme Court and was granted four weeks to find a new site, and then an extension of eight weeks. When even that lapsed, the council appealed for more time but was refused.

Disappointed by the administration’s inability to manage waste, the 11 panchayats decided to seek their own solutions. They plan to conduct discussions in each ward and also consult with experts. “In rural areas, there isn’t much waste being generated,” said Tikam Ram, a resident of Pirdi. “We will compost the organic waste. We need to understand how to deal with non-biodegradable waste.”

However, the official at the waste-to-energy plant dismissed composting and recycling as obsolete processes, possibly because for the plant to remain viable, it will need a steady supply of waste with high calorific value. Then again, the amount of waste is only going to increase because Kullu and Manali are likely to be visited by more tourists, not fewer. According to official tourism data, 3.4 million people visited Kullu district in 2015.

The official also said the administration planned to “take control of the entire waste chain, from door-to-door collection up until processing of the waste”. It’s unclear what fate awaits the workers informally engaged in recycling waste for a living. 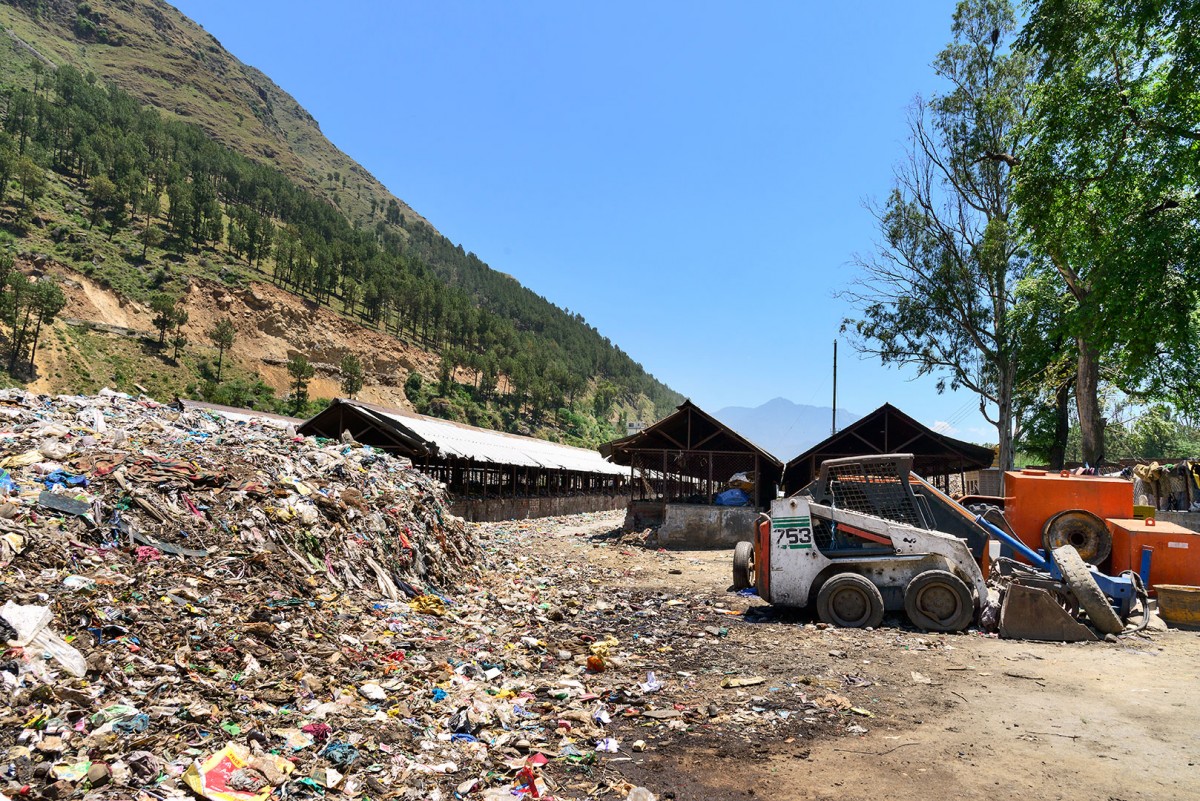 The Kullu municipal council’s waste disposal site in Pirdi. It was poorly managed and had to be closed. The site had originally been planned with sufficient compositing pits and an incinerator to burn non-biodegradable and non-recyclable waste. Photo: Kanika Bansal

Like Kullu, the municipal council of Manali has not implemented any decentralised solutions either. But unlike Kullu, Manali depends more on these workers during tourist season because of the extra waste generated. Given the paucity of safai karamcharis, the workers play a crucial role in ensuring that more local waste enters the recycling chain.

“There are close to 200 informal waste pickers in Manali alone. For any solution to be implemented, they have to be incorporated into the waste management chain,” a junior official at the council said.

When the author visited a local scrap dealer, five waste-pickers showed up in a span of 20 minutes, with their collections neatly separated into different kinds. One young boy working at a hotel nearby brought a sack full of tin cans.

This particular dealer has been in the business for 30 years. He says notebooks go for Rs 10/kg, PET bottles for Rs 20/kg and cardboard, for Rs 5. “Half of Manali’s waste comes to us for recycling. What remains is the wet waste, which the council used to compost earlier,” he said.

The waste pickers collect recyclable waste from around the town and sell it to the dealer. He then compresses it and transports it to grinding factories in the neighbouring districts of Solan and to units in Chandigarh and Delhi.

The dealer and others like him in Manali are certain the upcoming waste-to-energy plant won’t disrupt the existing waste economy. Even though the project plans to co-opt the informal waste pickers, they say it will materialise only if the conditions of profit are met.

According to the Solid Waste Management Rules of 2016, all urban local bodies are required to set up material recovery facilities with sufficient space to allow waste-pickers to easily separate recyclable from non-recyclable waste. However, no such systems are currently in place. Every day, waste workers rummage through mounds of unsegregated waste to extract valuable stuff. Most privately owned scrap outlets are cramped makeshift structures. Here, the workers are exposed to poisonous conditions.

In effect, a valuable first step towards establishing effective waste management practices in the mountains would be to address a fundamental contradiction. Will an inclusive solid waste management policy based on values of circularity do any good if the solutions on offer are based on exclusivity and linearity?