According to the daily report of the Assam State Disaster Management Authority, the floods and landslides claimed the lives of nine persons, including three children, on Sunday. 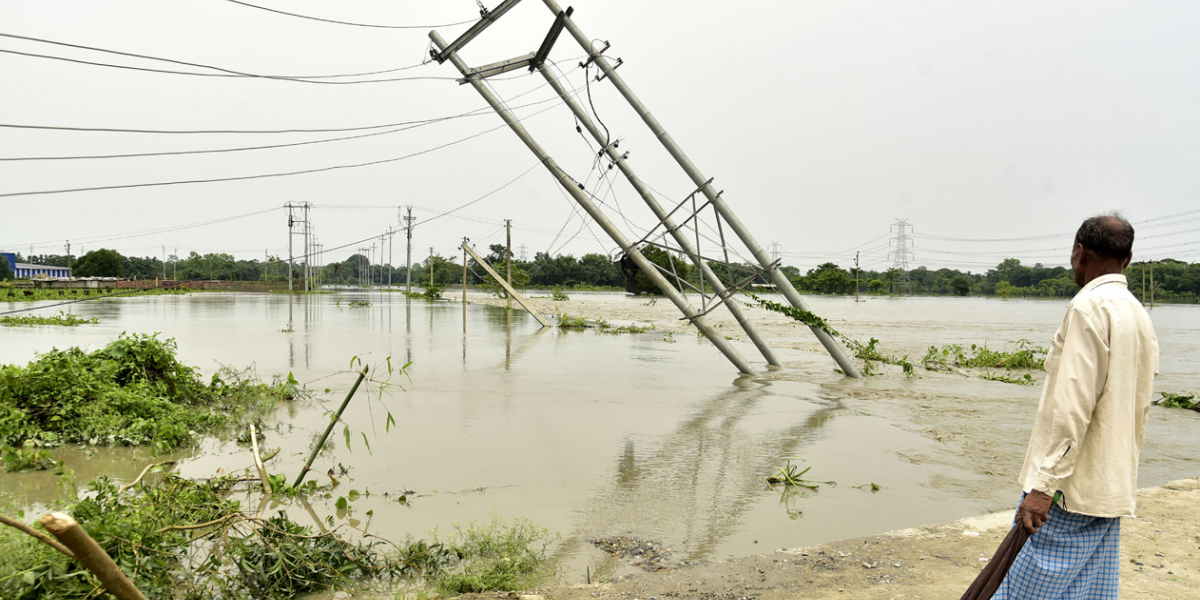 Kamrup: A damaged utility pole after flood due to heavy rains, at Rangia in Kamrup district, Sunday, June 19, 2022. Photo: PTI

New Delhi: The flood situation in Assam deteriorated further with the deluge claiming more lives on Monday, June 20, taking the overall toll to 73.

The dead included two policemen, including an officer in-charge of a police station in Nagaon district who had gone to help marooned people but were swept away. Their bodies were fished out in the early hours of Monday, officials told news agency PTI.

According to the daily report of the Assam State Disaster Management Authority, the floods and landslides claimed the lives of nine persons, including three children. While six persons drowned, three were killed in landslides.

The deaths were reported from Cachar, Barpeta, Bajali, Kamrup, Karimganj and Udalguri districts, it added.

Besides, eight more people are missing across five districts, the bulletin said.

Barpeta is the worst-hit district with over 12.76 lakh people suffering, followed by Darrang with nearly 3.94 lakh people affected and Nagaon with more than 3.64 lakh people hit by the deluge.

Overall, the floods and landslides have affected a population of nearly 43 lakh in 33 of the state’s 35 districts.

Separately, at least five animals, including a leopard and a three hog deer, have been killed in floods in the Kaziranga National Park, so far this year, the PTI report added, citing an official statement.

More than 15% of the park area has been inundated with the Brahmaputra river, which passes through it, flowing above the danger level at several places, it said. The total park area currently is 858.98 sq km.

The Brahmaputra is flowing over the danger level at Nematighat, Numaligarh, Dhansiri Mukh and Tezpur, with the water levels at these points impacting the flood situation in the park.

Also read: The Mishing and the Miyah Have Learnt to Live With the Brahmaputra. Can Assam?

Meanwhile, chief minister Himanta Biswa Sarma has directed air dropping of food and other relief materials in areas where there is heavy inundation. He added, ”If certain areas are not covered in the relief manual, we will ensure that they are covered under State Owned Priority Development schemes and CM’s Relief Fund’.’

Among its neighbouring states, Meghalaya has reported 28 deaths so far, mostly due to landslides triggered by heavy rains, Deccan Herald reported.

In Arunachal Pradesh, eleven people, including a 16-year-old boxer, died due to the landslides.

Meanwhile, over 10,000 people have been rendered homeless in Tripura due to inundation caused by incessant rainfall since June 17 but there is no report of any human casualty, an official told the news agency.

In Mizoram, low-lying areas in Thenzawl town of Serchhip district, around 90 km from Aizawl, and plantations on the banks of Khawthlangtuipui river in Lunglei district lay inundated as rainfall continues to pummel the state, along with other parts of the northeastern region.

Water from the swollen Tlawng river has also submerged crop fields in Sairang village, about 21 km from Aizawl, the officials told PTI, adding that no casualty has been reported thus far.