Nearly three lakh people are in distress in Silchar with an acute shortage of food, clean drinking water and medicines. 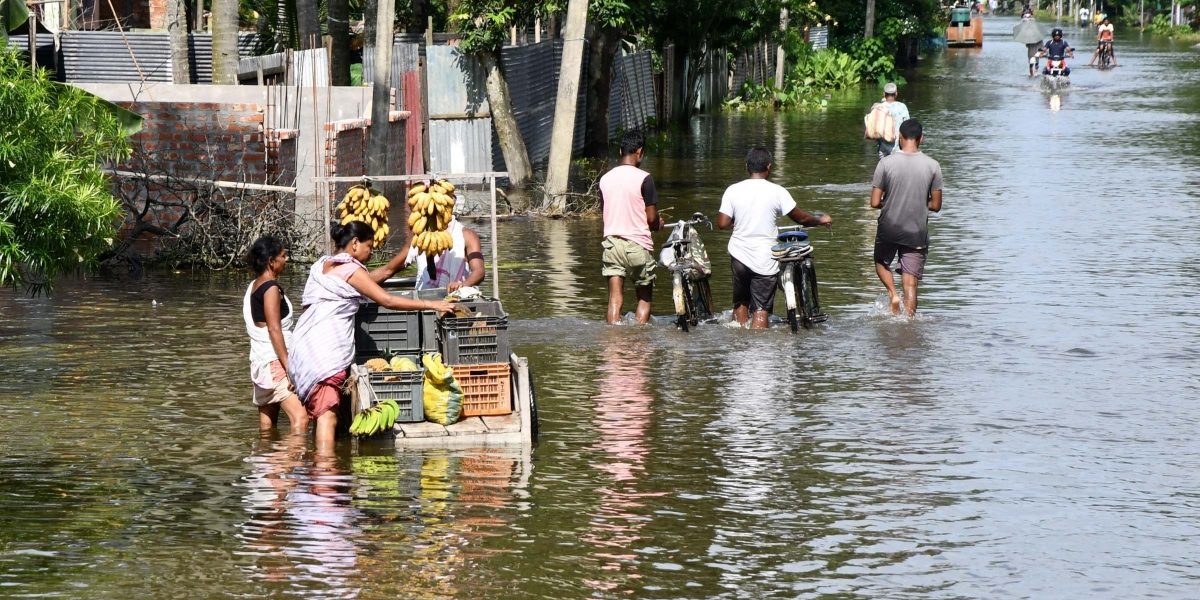 A vendor wades through a flooded street, in Kamrup distric of Assam, June 24, 2022. Photo: PTI

Guwahati: The flood situation in Assam remained grim on Saturday with the death count rising to 118 and Silchar town in the Cachar district submerged for the sixth straight day, officials said.

Ten more people have died in the past 24 hours – two each from Barpeta, Dhubri, Karimganj and Udalguri districts and one death each from Cachar and Morigaon – due to floods and landslides.

The total population affected by the floods declined to 33.03 lakh in 28 districts as against the previous day’s figure of 45.34 lakh in 30 districts, a bulletin issued by the Assam State Management Disaster Authority (ASDMA) said.

The situation improved marginally in some districts, as rivers showed a receding trend though the Brahmaputra at Dhubri and Kopili in Nagaon were flowing above the danger mark, the officials said.

The Cachar district administration is engaged in rescue operations in Silchar to evacuate marooned people to safety, with priority on shifting ailing persons to hospital, deputy commissioner Keerthi Jalli said.

Packets with food, drinking water bottles and other essentials are being airdropped in the town by Indian Air Force helicopters, and this will continue till the situation improves, she said.

Two drones have also been deployed in Silchar for carrying out flood inundation mapping as well as to provide relief materials to the affected people.

Eight NDRF teams comprising 207 personnel from Itanagar and Bhubaneswar, along with an Army unit with 120 personnel and nine boats from Dimapur have been stationed in Silchar.

Nearly three lakh people are in distress in Silchar with an acute shortage of food, clean drinking water and medicines, the officials said.

Relief materials were distributed from 409 delivery points among the flood-affected people, who have not taken shelter in the camps.

Altogether, 312 houses were damaged during the last 24 hours, the ASDMA said.