The Centre and various states have pledged help to flood-hit Kerala, where 324 people have died and lakhs have been relocated to relief camps. But critics have hit out at the Centre for its delayed response. 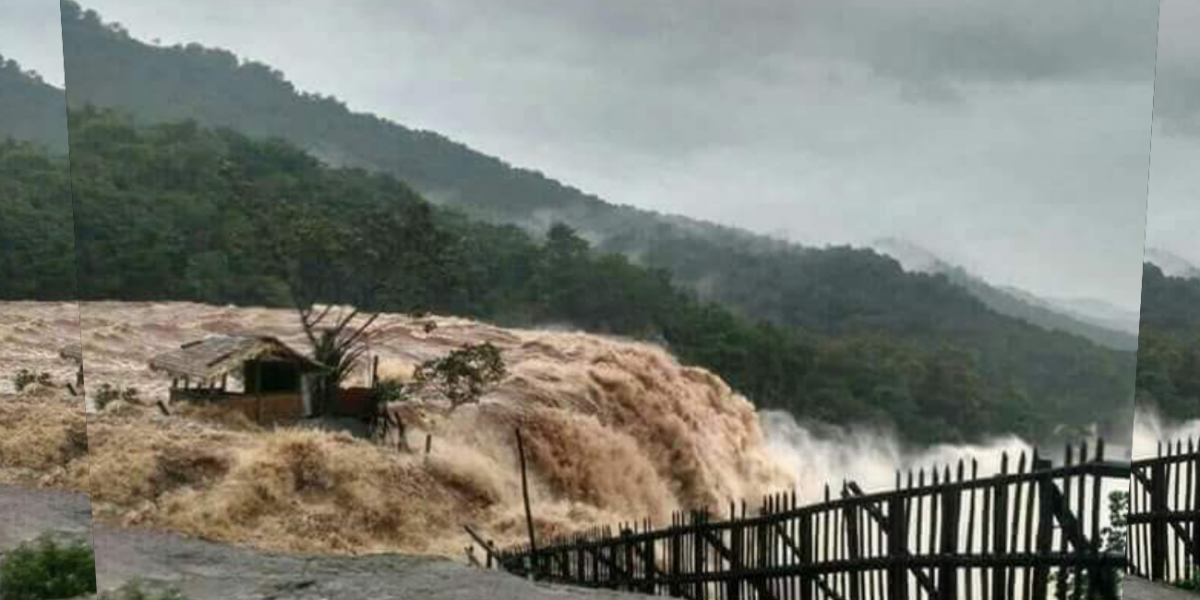 “When I was travelling, I was thinking I would help by distributing food to those affected by the rain. But hours after I reached my village, the rain worsened and when the Pamba river started to overflow, following the opening of dams in the district, the flood waters started to rise. Within hours, there was no difference between road and river,” Joseph told The Wire.

“After I started to hear that people are stuck in their homes, I realised that I should join the rescue efforts. I called my friends, hired a boat and started rescue operations from Thursday morning onwards. We were able to rescue a couple of families, transport food and drinking water to camps on our boats and coordinate rescue operations with government rescuers and others,” Jospeh added.

For the last two weeks, Kerala has been witnessing the worst rainfall in a century. The incessant rainfall forced the government’s hand to open 80 dams, leading to the flooding of major cities in the state. 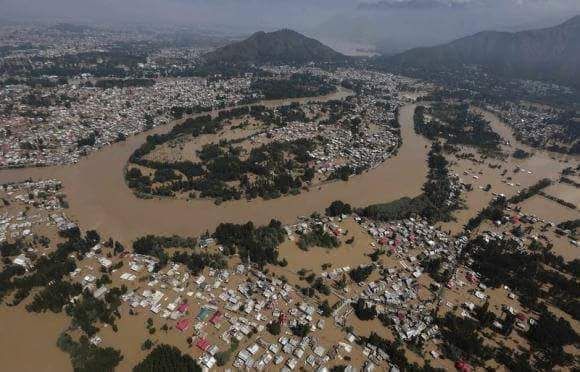 According to Indian Meteorological Department, Kerala has witnessed an average rainfall of 2091.1 mm between June 1 and August 15, which is 30% above the normal.

This is a record rainfall since the deluge in Kerala in 1924, which was called Great Flood 99, where the average rainfall was around 3000 mm. 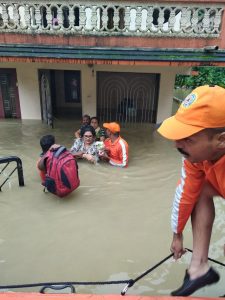 Following the continuous rain, for the first time in the history, Idukki dam, Asia’s largest arch dam, opened all five of its shutters, leading to overflowing of rivers. Munnar, Thrissur, Ernakulam, Aluva, Kottayam, Alappuzha and Idukki were flooded in the aftermath.

While rain has caused landslides in Idukki and Kannur, overflowing rivers have cut off roads in many places and flooded many cities.

Meanwhile, in Chengannoor, one of the worst hit areas in the state, Saji Cherian, the MLA from the area, said that around 30,000 people are still waiting to be rescued.

“Navy boats and helicopters are helping a lot. However, the fishermen boats are successful in entering every nook and cranny in the area. We were able to rescue thousands today. But there are around 30,000 people still stranded on rooftops waiting for help,” the MLA said.

In addition to government rescue forces, help has been sought from fishermen from different coastal areas. In Chengannoor itself, 65 fishermen boats, four helicopters, five military boats and four 100-member strong army teams that have been deployed.

Meanwhile, unconfirmed reports from Chengannoor claim that several dead bodies have been sighted floating in the area.

On Friday night, Cherian while talking to a TV channel, said that if the situation worsens, the death toll could be in the thousands in Chengannoor alone. As of now, food is being deployed by using helicopters.

The situation is similar in other cities in Kerala. With the roads cut off, volunteers and government agencies are not being able to distribute relief materials.

“We have collected relief materials for thousands of rupees. We want to distribute the materials in Alappuzha where there are no proper roads. But the road to reach the nearest town itself is cut off, so we are unable to reach out to them,” Ajaykumar V.B., a social activist, said. 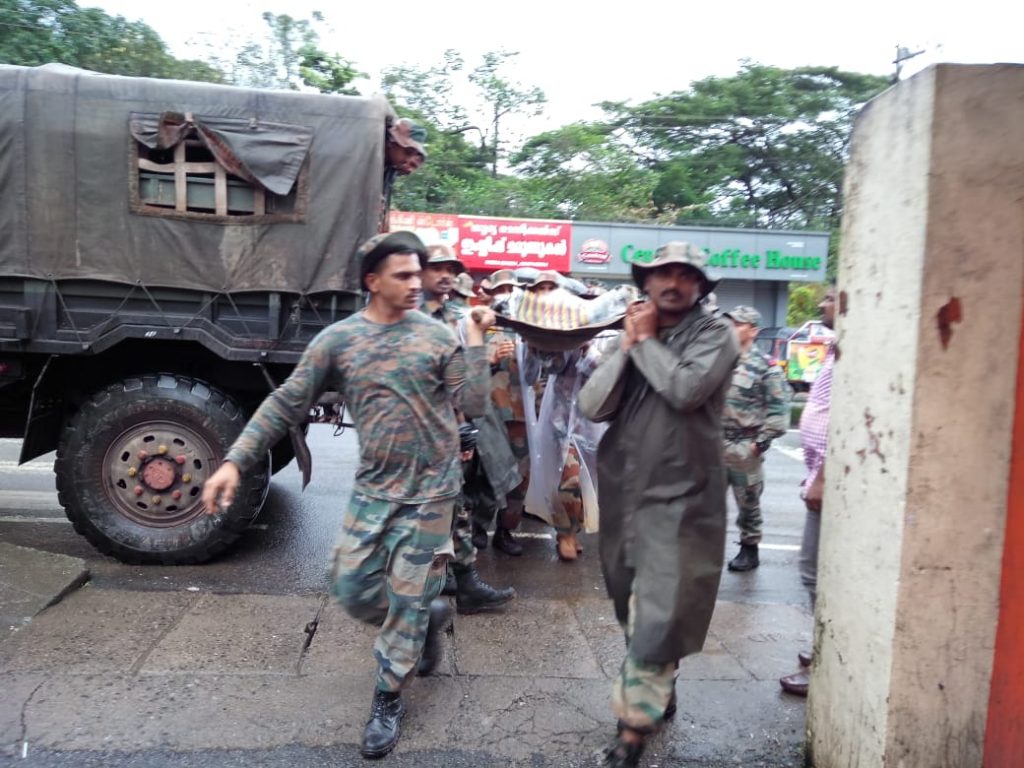 Alappuzha is a district with backwaters, lakes, lagoons, and canals. During the first phase of monsoon itself, many parts of Alappuzha were cut off from other areas. “Now, the second phase has put many people’s life in danger. We are afraid that some may die due to hunger,” Ajay added.

According to a senior official in Kerala State Disaster Management Authority, as per latest data, there are 3,177 camps sheltering around 846,250 people in different parts of the state.

Adarsh Kumar, a resident of Aluva, who is now in a camp in a school, said that there is a shortage of food, drinking water, medicine and even clothes.

“Women do not have sanitary napkins. And those who are sick are struggling a lot. It is a scary situation,” Adarsh said. 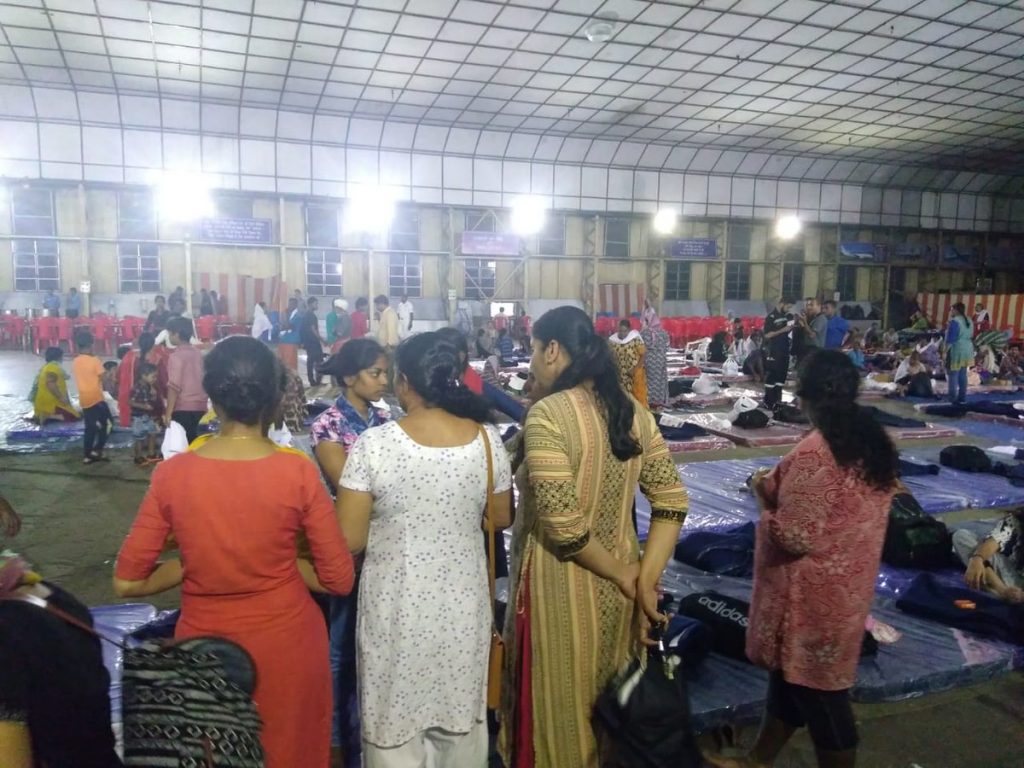 In a press conference held on Friday night in Thiruvananthapuram, a few hours before Prime Minister Narendra Modi landed in Kerala, chief minister Pinarayi Vijayan revealed that from May 29 till August 17 morning, 324 people have died in the deluge.

After a meeting with the prime minister on Saturday morning, the chief minister tweeted that he has informed Modi that the initial estimate of loss the state has suffered is Rs 19,512 crore.

In another tweet, expressing Kerala’s thanks to the Centre, he wrote that the prime minister announced an assistance of Rs 500 crore. He added that he had requested immediate assistance of Rs 2,000 crore. 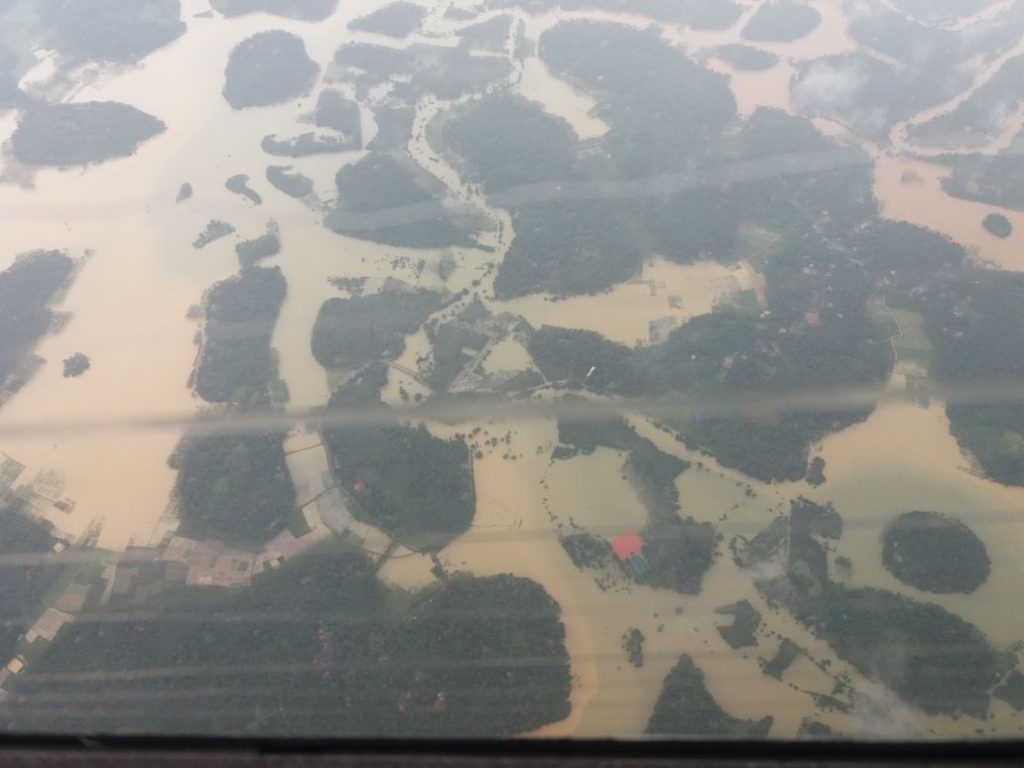 On August 12, Union home minister Rajnath Singh and minister of state (independent charge) for tourism K.J. Alphons, visited the flood and landslide-affected areas of Kerala and announced a release of Rs 100 crore in advance from the National Disaster Response Fund.

According to a statement from PMO office, the prime minister has also announced ex-gratia of Rs 2 lakh per person to the next kin of the deceased and Rs 50,000 to those seriously injured from PM’s National Relief Funds (PMNRF).

The PMNRF was set up in 1948 by then prime minister Jawaharlal Nehru using public contributions to assist displaced persons from Pakistan. However, the resources of the PMNRF are now utilised primarily to render immediate relief to families of those killed in natural calamities like floods, cyclones and earthquakes, etc. and to the victims of the major accidents and riots.

The fund consists entirely of public contributions and does not get any budgetary support. The corpus of the fund is invested with scheduled commercial banks in various forms. Disbursements are made with the approval of the prime minister.

Even though the chief minister has not expressed his displeasure at the Centre’s response openly, many across India have alleged that the Centre’s support thus far has been insufficient.

“Kerala has suffered a loss of nearly ₹20,000 cr in these floods. The state had sought an *immediate* assistance of ₹2000 cr from the Centre. What Modi has given is grossly insufficient for urgent rescue, relief and rehabilitation work,” the tweet read. 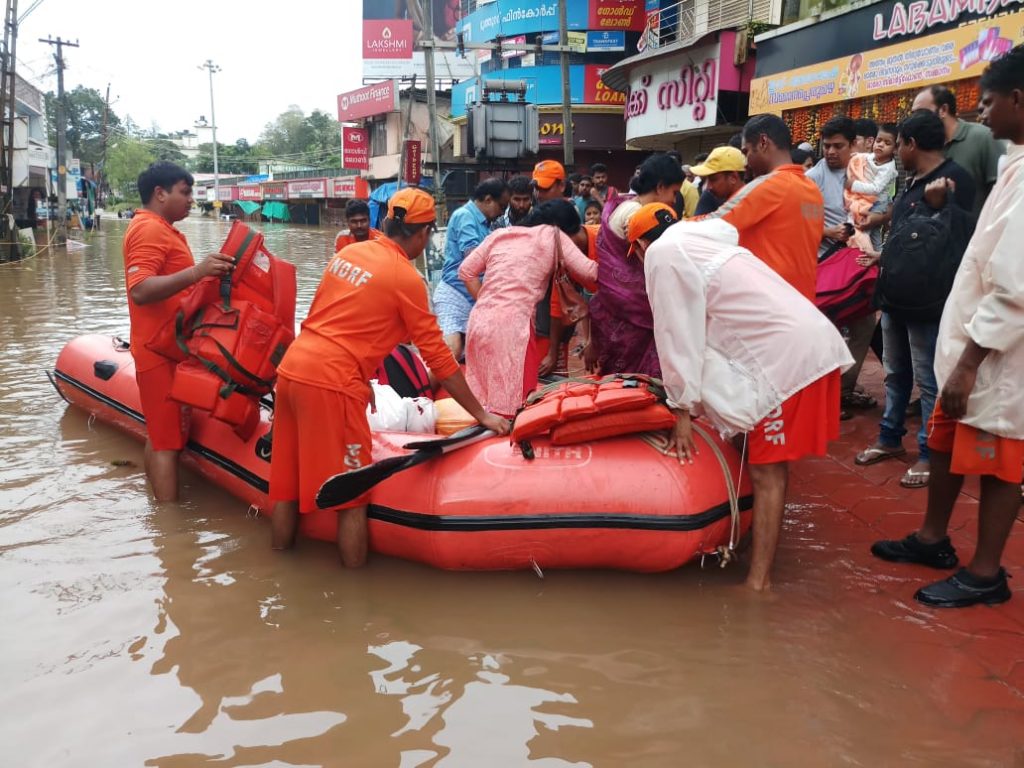 When The Wire got in touch with Yechury, upon being asked if the Centre is playing politics, the general secretary replied in a text message: “We are not alleging that. But people are not fools!”

Meanwhile talking to The Wire over phone from Chengannur, Joseph C. Mathew, a former IT advisor to the Kerala government, said that the government should simply give back the Rs 500 crore.

“I am stranded in the worst flooded area. My parents-in-law are stuck in a building for the last four days. Many like them are still stuck. Rescue operations are not efficient. People are dying due to lack of medicine and food. Rescuers are retrieving dead bodies. Do you think that Rs 500 crore is enough?” Joseph asked.

Interestingly, it has been noted that no matter what disaster hits any part of India, the Modi government only announces Rs 500 crore as relief each time.

On July 25, 2017, while chairing a meeting in Ahmedabad on the Gujarat floods, Modi announced an immediate additional assistance of Rs 500 crore under the State Disaster Response Force. According to reports, around 200 people died and 4.5 lakh were displaced in Gujarat floods.

On August 1, 2017, for the relief, rehabilitation, reconstruction and flood mitigation measures in the flood-affected Assam, Arunachal Pradesh, Manipur, Nagaland and Mizoram, Modi announced a relief package of over Rs 2,000 crore. Around 80 people died during the disaster. 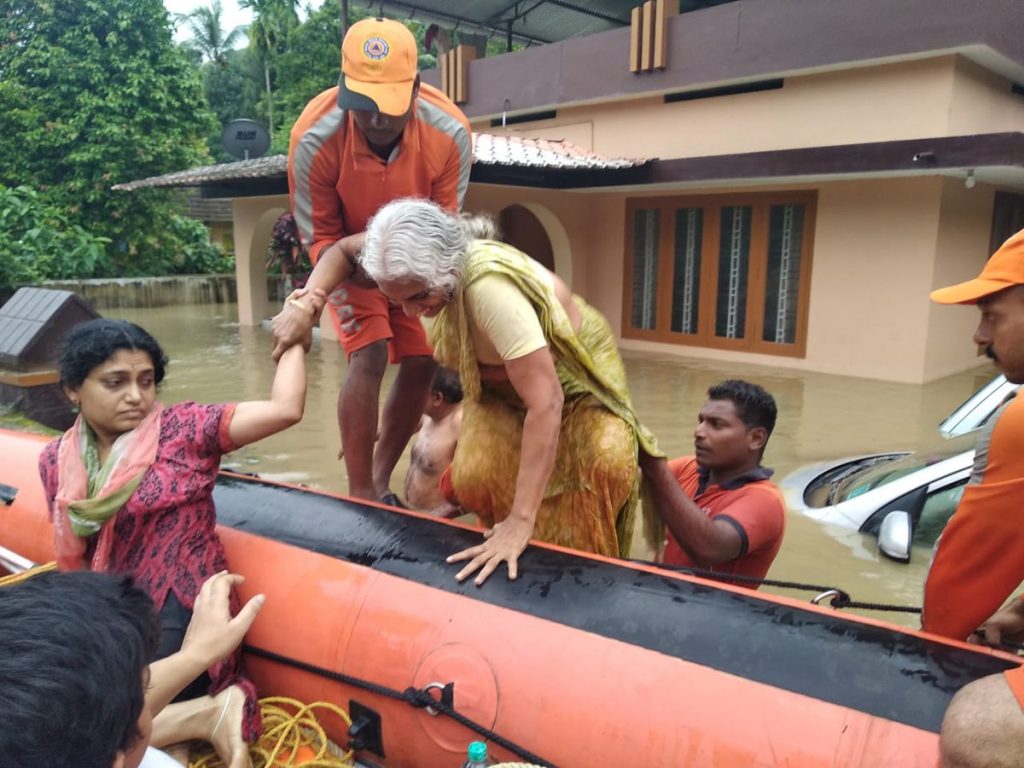 However, other states have also made contributions towards easing the situation in rain-battered Kerala. Maharashtra has announced Rs 20 crore, Uttar Pradesh Rs 15 crore, Jharkhand Rs 5 crore and Gujarat, Bihar and Madhya Pradesh have announced Rs 10 crore each.

Even though Tamil Nadu has been at loggerheads with Kerala on lowering the water level of the Mullaperiyar dam, the state has announced Rs 10 crore in assistance in two phases.

Meanwhile, Kerala had issued red alert again in 11 districts. Heavy rainfall is predicted for the day in all districts except Thiruvananthapuram, Kollam and Kasaragod.

With no end in sight to the deluge, people are still making panic-stricken appeals on social media for help, saying they cannot contact rescue services.

Flood water from the Periyar river and its tributaries have submerged many towns in Ernakulam and Thrissur.

An alarming situation has developed in Alapuzha, Ernakulam, Thrissur and Pathanamthitta districts, where roads have become completely submerged.

Thousands of people are still perched on trees and rooftops. Water has even started entering relief camps. Other messages have been sent from people trapped inside temples and hospitals as well as their homes.

Hundreds of fishermen from coastal villages have joined the rescue efforts at Pathanamthitta, where helicopters are airlifting people to safer places.

Currently, 57 Teams of National Disaster Response Force (NDRF) involving about 1,300 personnel and 435 Boats are deployed for search and rescue operations.

Five Companies of Border Security Force, Central Industrial Security Force and Rapid Action Forces have been deployed in the Kerala to carry out rescue and relief measures.

The army, air force, navy and coast guard have also been deployed for assisting Kerala in search and rescue operations.

A total of 38 helicopters have been deployed. In addition, 20 aircraft are being used for ferrying resources.

The army has deployed 10 columns and 10 teams of the Engineering Task Force involving around 790 trained personnel. The navy is providing 82 teams.