As Droughts Spread Across India, So Does Water Budgeting

Villages across Maharashtra are working together to get themselves through worsening droughts. 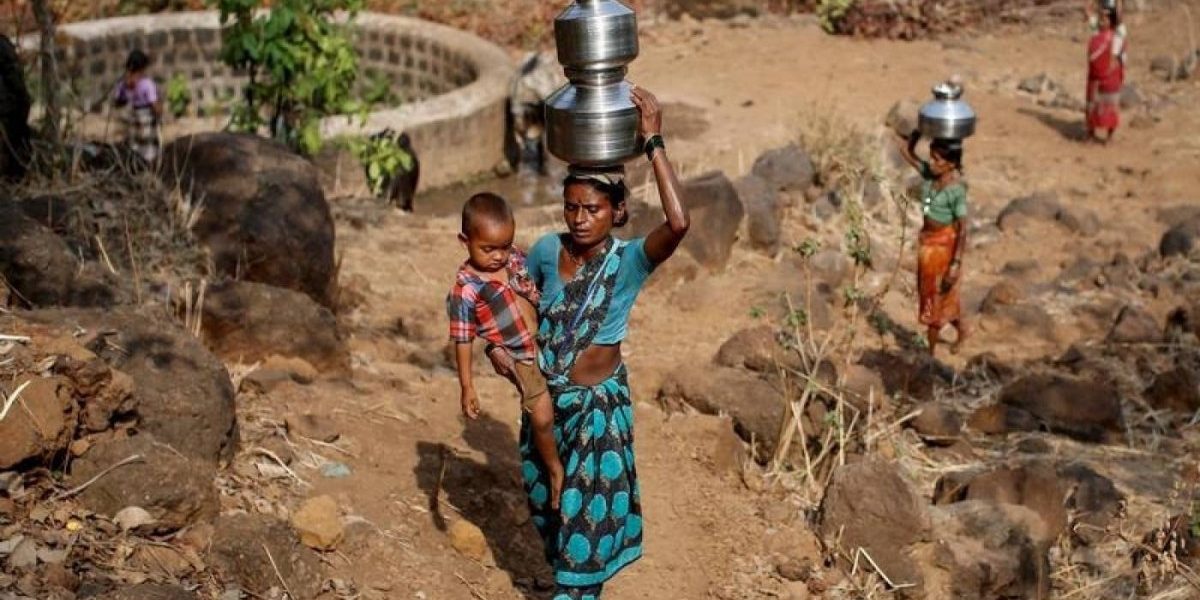 One billion Indians are already living in areas where water is scarce for some or all of the year. Photo: Reuters

Every year many of the inhabitants of Jalna, Maharashtra, are forced to buy drinking water as their wells dry up through the burning summers. This year, a drought hastened that critical moment, and in March, tanker trucks full of water were already plying local roads, many owned by private companies that hike the price as demand rises.

But things were different in the village of Kolegaon. Residents there were able to create a water budget after the last monsoon and make their water last a little longer. They measured the rainfall with gauges, calculated how much water had accumulated in their wells and storage structures, then worked out what would be left over after their main crop was harvested. The math was painfully clear: There would be none.

So the villagers agreed they would not sow a second crop. Instead, they would save as much water as they could and use it only for domestic needs and for their livestock. They even took an oath in a public ceremony. “We promised that we would use whatever water is available carefully,” said former village head Gajanand Gawande.

Kolegaon is one of a growing number of villages in Jalna and across the state of Maharashtra that is experimenting with water budgeting to cope with recurring droughts. Some, like Kolegaon, are being helped by the Watershed Organization Trust, a 25-year-old group that works with rural communities to improve water management practices. Others are being introduced to the idea by a new World Bank-funded project that is using technological innovations to build climate resilience in 5,000 villages in the state.

Water budgeting is the latest effort to solve an increasingly chronic problem in parts of rural India: water scarcity caused by recurring drought and unregulated extraction. India is the world’s largest user of groundwater, most of it for irrigation. In order to water the high-yielding crops introduced in a national program known as the Green Revolution, farmers across India dug hundreds of thousands of borewells and tubewells to pump water to the surface.

While these innovations helped increase India’s farm productivity and food security over the past 50 years, farmers are increasingly bumping up against the limits of what the environment can handle, especially in hard-rock regions like Jalna where the ground cannot absorb or hold much rainwater. Large parts of India are semi-arid and at least half its farms are rain-fed.

Climate change has made the situation worse as droughts and heatwaves become ever more frequent. Groundwater depletion rose by 23% in the country between 2000 and 2010, according to one study. One billion Indians are already living in areas where water is scarce for some or all of the year.

Historically, India has spent billions of dollars on improving the water supply through dams and irrigation canals. In recent decades, the government has also invested in watershed programmes to replenish the groundwater and reduce soil erosion by harvesting rainfall run-off through the construction of bunds, ponds and mini-dams. The Watershed Organization Trust, one of the groups assisting communities in Maharashtra with their water budgets, has also worked on many watershed programmes, but they have seen the limitations of the approach.

“As water availability rose after watershed programmes, people began extracting more water, and again greater problems [would] arise,” says Eshwer Kale, a senior researcher with the group. “That’s when we started to think about not just improving supply but managing demand. Educating communities to make the best use of available water.”

This idea isn’t completely new. Balancing inflow with outflow – or mass balance – is a routine part of planning large-scale water projects like building a dam or delivering drinking water to a city. Applying that concept to local groundwater is also not without precedent.

Tushaar Shah, a senior fellow at the International Water Management Institute, a non-profit devoted to researching sustainable use of water in developing countries, traces the idea to American experiments in the 1980s and 1990s, especially in Kansas where local institutions brought groundwater users together to manage demand through water permits. Mexico has also tried community management of local aquifers. And in India, more than a decade ago, the Food and Agriculture Organization of the United Nations funded a project in the state of Andhra Pradesh to introduce water monitoring and budgeting. 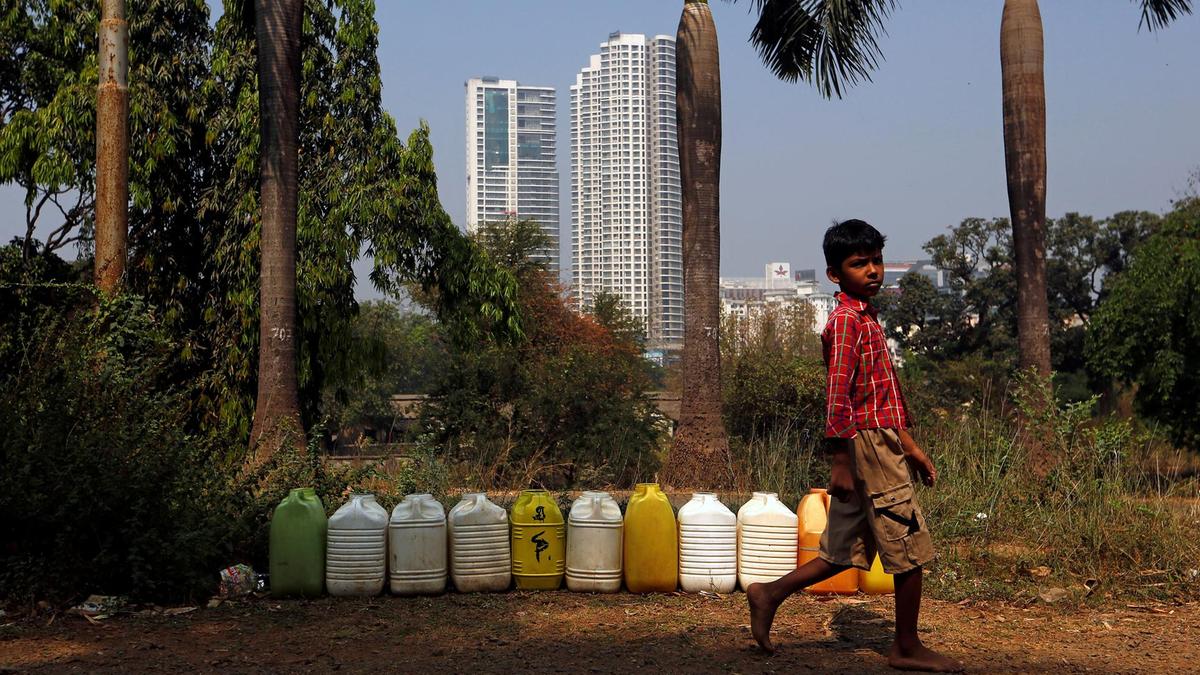 India’s water crisis is spiralling out of control, primarily due to poor water and environmental management, inadequate or unclear laws and corruption. Photo: Reuters

The premise, says Shah, is that knowledge can change behaviour. If you help people understand the hydrology, he says, “including how much is available and how much gets used, the next natural step for them might be to come together and discuss how to make the best use of that available water.”

In practice, the challenges are huge, especially in highly populated countries like India. Unlike in the US, where large farms dominate, India has tens of millions of small farmers to unite and monitor and local governance is often weak – though Shah notes that even in Kansas there were violations.

There is also the colonial legacy to contend with. Traditionally, Indian villages managed water largely as a community resource, as seen in the ancient temple tanks of southern India and the community step wells of the northwest that acted as water harvesting and storage structures. Colonial rule slowly changed those customs through new tax and legal systems, including an easement law that attached water under the ground to the landowner above it. Agricultural intensification since independence further encouraged farmers to prioritise short-term gains in productivity over the long-term health of the water supply.

Reversing this trend requires local leadership or economic incentives, suggests Shah. Water-conservation success stories in villages like Hivre Bazar and Ralegan Siddhi, for instance, were driven by charismatic leaders like the Gandhian activist Anna Hazare who later led a national anti-corruption movement. As for incentives, Shah says these have been mostly “perverse” to date; subsidised electricity, in particular, has only encouraged Indian farmers to keep their well pumps running.

Even the UN-backed programme in Andhra Pradesh, which helped save 33% of the water in some villages, did not change behaviour permanently, according to a follow-up survey by the International Water Management Institute. “Budgeting can be a very powerful way of engaging the local community to understand and monitor water resources,” says Shah, but looking at the success of such efforts around the world to date, “managing groundwater demand has been a tough nut to crack.”

The challenges are evident in Jalna, a region of uneven rainfall and chronic agrarian distress. In March, many farmers could be seen boring new wells to water their fields. Some had massive plastic-lined earthen tanks full of thousands of gallons to water their orchards. Meanwhile, in poorer villages, people were already scrambling for drinking water and leaving their land to find wage work.

In this unequal and competitive water landscape, the community spirit of Kolegaon stands out. The water budget is public; in the middle of the village, a large whiteboard covered with numbers is affixed to a wall and enthusiastic farmers refer to their well levels as their “bank balance.” The village has banned new wells deeper than 200 feet and this winter they also banned pumping of water for crops. How do they know when someone is extracting excess water on his own land? “The neighbour will know,” said Gawande, the former village head. “And he’ll tell.”

The social dynamics in Kolegaon are favourable for this kind of change. The village is dominated by one caste, a social group in the Hindu hierarchical and hereditary social class system. Residents are also used to farming experiments; Ishvar Wagh, a doctor and prominent member of the community, has been promoting organic farming here for several years. And the village council has some experience in enforcing tough rules; it successfully banned liquor some years ago after a rash of fistfights during weddings.

For all the community zeal, the Watershed Organization Trust has also tried to ensure that water budgets don’t affect incomes so the bigger farmers in the area also come on board. “Water budgeting is part of a complete package,” says Kale, who added that the organisation has helped improve soil fertility and crop productivity.

This holistic approach is also being taken by the World Bank’s Project on Climate Resilient Agriculture in 5,000 villages in Maharashtra. Implemented by the state agricultural department, the project provides subsidies for efficient irrigation tools such as sprinklers, new water harvesting measures and drought-tolerant seeds, as well as training on efficient farming practices including water budgeting.

Where the Trust’s strength lies in community mobilisation, the World Bank project has pulled in scientists from the Indian Institute of Technology, Bombay to update colonial-era water management formulas and train agricultural officers. IIT professor Milind Sohoni and his team are also helping to create a mobile app where farmers will be able to easily check seasonal water availability. The app will help farmers make better decisions – to sow a hardy local grain over a water-intensive cash crop like sugarcane in a drought year, for example – and even assess their neighbour’s water use.

The idea is to use modern technology to “bring back community understanding of water resources,” says Sohoni. Groundwater can seem mysterious, he says, “but maps and numbers can tell us what is going on: how much water is coming in and going out, who gets access and who doesn’t.”

The effectiveness of this science-driven approach remains to be seen, but for the residents of Kolegaon and the other villages using the Trust’s water programme, the results have been promising so far. Of 100 villages, 80 have passed rules restricting the kind of crops that could be grown and the depth of new wells.

“Not everyone is following [the rules], but at least there is a shift in mindset and awareness,” says Kale. “People are talking about water balance.”

Vaishnavi Chandrashekhar is a journalist based in Mumbai. Her work has appeared in The Guardian, Foreign Policy, Yale e360 and The Christian Science Monitor, among others.