Around the World in 50 Maps: The Illustrated Exploits of Animal Adventurers

Animals have adventures but they can't even brag about what they saw and did. Now, scientists have stepped in to tell those stories. A cheetah stands on a rock. Credit: Glavo/pixabay

Any book that cannot be balanced on my stomach while I lie prone in bed ain’t worth reading. Where the Animals Go (2017) was an exception, and I paid for supporting its heft with a sore gut. But what I gained was an insight: animals have adventures but they can’t even brag about what they saw and did. Now, scientists have stepped in to tell those stories.

Humans have long been fascinated by why animals travel, where and when they go, and what they do. No doubt fur-trappers and whalers had a stake in answering these questions. One chart plots the locations where whaling ships harpooned 54,000 whales over 200 years. A map of 1892 vintage tracks the migration of fur seals across the north Pacific. When trappers had skinned too many of these marine mammals, the declining numbers led to an international agreement, the first one to benefit wildlife, as early as 1911. Today, our interest in following animals is driven by conservation needs; it’s not possible to protect species while ignoring the routes they travel. And for that, we need to plot the trails they frequent.

Tracking technology changed the way biologists studied their subjects. In the early years of this new age of wildlife studies, researchers had to be within the narrow radius of the radio transmitter to get a fix on the animals’ location. They had to climb up hills, wade across streams and circumvent swamps once a day at least. Some species like snow leopards tested the physical endurance of humans studying them and found them wanting. Now, newer technology allows researchers to follow their subjects with the aid of satellites from the comfort of their homes or offices, even half a world away.

In this gizmo-heavy field, the study of animal movements has transcended the limits of standard biology, becoming a multidisciplinary collaboration between biologists and coders, data analysts, engineers among others. And this book is a testament to such seamless partnership.

You’d expect a book about animal travels to be written by biologists. Instead, it’s the work of James Cheshire, a geographer who studies human movement using census data, and Oliver Uberti, a former design editor for National Geographic. They had earlier worked together on a bestseller London, the Information Capital, examining the habits of Londoners. 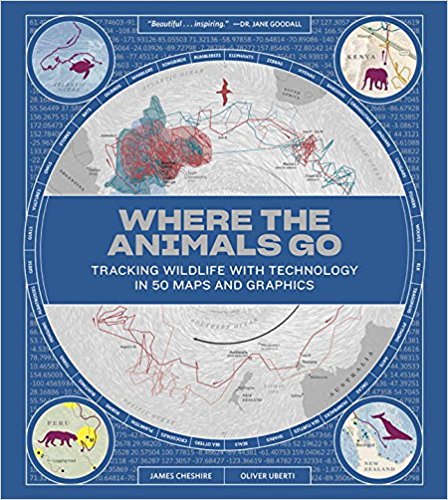 While working at the magazine more than a decade ago, Uberti painted a map of central Africa for an article written by Mike Fay, an ecologist who gained fame for walking across the continent in little more than a pair of shorts and sneakers. At a time when poachers mowed down thousands of elephants for their tusks, Fay and his team collared a female they called Annie in a national park. Watching the little blips that her tag emitted, they noted when she and her calf left the safety of the reserve, where they fed and how they crossed roads at night. Three months later, she was shot for her tusks and her calf presumably went missing. The tragic tale came to symbolise the poaching crisis devastating Africa’s elephants and inspired this book.

Why do animals travel? They seek pastures with seasonal plentitude, territory or to escape the cold. As soon as the autumnal chill descends on the Mongolian plateau, bar-headed geese head on a 5,000-kilometre journey south. These unlikely athletes crest the Himalaya, sometimes flying at 7,000 metres’ elevation day and night. The cold mountain air is oxygen-poor, and geese hearts pump an astounding 500 beats a minute, a rate no human can sustain.

Tracking animals is not as simple as catch, tag and sit back and watch the screen light up. The lifestyle of some animals cannot be unravelled by traditional technology, and researchers are forced to adapt and innovate.

One such person is Michael Noonan, who studies badgers that spend a lot of time in their underground setts that are impenetrable to the GPS devices seeking satellites to triangulate the animals’ position. Noonan set up a grid of energised wires above ground, and by measuring changes in the magnetic fields, he mapped his subjects’ subterranean lives in detail. The authors highlight such innovations in the hope that they may be of use to other scientists stumped by technology.

Not only do the stories show where and why animals go but answer some of the attendant questions – such as how do they decide where to go. Baboon societies are hierarchical and the dominant ones usually call the shots. But researchers were surprised to learn that any member of the troop can set the day’s agenda. If the majority agree, the entire troop follows. In the case of minor disagreements, they choose a middle path favouring neither side.

It’s tempting to think these individuals that seem to test their own mettle, throwing themselves against the terrain, are singular exceptions – the Edmund Hillarys of the animal world. But we don’t know if others of their species are just as intrepid and driven to risky endeavours.

Slavc, a wolf tagged in Slovenia, embarked on an epic trek that lasted four months and 2,000 remarkable kilometres, although the book’s authors say he covered a mere 1,000 kilometres. He swam across a freezing river, scrambled over high mountain passes in the Alps, and plodded through six-metre-high snow drifts before settling down in northern Italy.

Great landscape-dividing fences meant to exclude animals could not stop the annual migration of the plains zebra. As they are drawn to distant grasslands, their tracks flow like water around the barriers, breaking the African record for longest land migration. They travel 500 kilometres round trip between their dry and wet season grounds.

Others like the giraffe OJ1 broke through the fence separating Namibia and Botswana not once but twice during the life of the tag when he embarked on the “longest giraffe track ever recorded”. M56, a mountain lion in search of territory, crossed Interstate 15 while another, M53, snuck into and out of Baja California, Mexico. An elephant, the Tsavo Bull, refusing to use an underpass, climbed up an embankment and crossed a railway line.

If there is a lesson here, it is this: “animals know what’s best for animals. We need to accommodate what they’re doing, not the other way around.” One we’d do well to heed in India, where highways and railway lines cut through wildlife areas and animals routinely get mowed down by vehicles and trains.

I hope the officials of our state forest departments read this book despite its steep price. Some harbour a long-held suspicion of technology, thinking it interferes with animal behaviour and movements.

When a radio-implanted king cobra was cannibalised by another in Agumbe, Karnataka, they stopped the study instead of enquiring what role cannibalism played in king cobra ecology. Such lack of understanding of technology or curiosity about the natural world discourages researchers. Indeed, this book doesn’t include a single study from India; research from the US, Europe and Africa dominates the collection.

Every animal adventure is accompanied by a map, revealing not only the world inhabited by it but also the topography it navigates. The 50, including a few foldouts, in this book offer many hours of absorbing study. Illustrations show how vultures catch thermal drafts, whales echolocate and plankton flee from light. It’s for this good reason an ebook edition isn’t available.

Tags can reveal much more than how, when and why animals go where they go. Researchers outfit animals with miniaturised gadgets such as temperature loggers, accelerometers and altimeters, turning them into cartographers of inhospitable terrain. A temperature tag on an elephant seal collected data under the Antarctic ice. Humpback whales led oceanographers to mighty submerged mountains.

Every tracking project generates a tonne of data, more than any single research team can utilise. The authors advocate for open-sharing of this surfeit of information so others can use them to expand our knowledge of the animal world. To this end, they plug the use of Movebank, a free website where researchers can upload data, and manage, analyse, share, map and archive it.

Using this database, an initiative called ICARUS (International Cooperation for Animal Research Using Space) plans to create a “dashboard for all of Earth’s wildlife”. “At a glance, we will be able to see ourselves and the animals – walking, swimming, flying – intertwined in one great beautiful tangle of tracks.”

By that time, I hope to learn to sit up and read books because our knowledge of animal movements is exploding, and miniaturising these tomes would be a travesty.