Are We Overestimating How Much Trees Will Help Fight Climate Change? 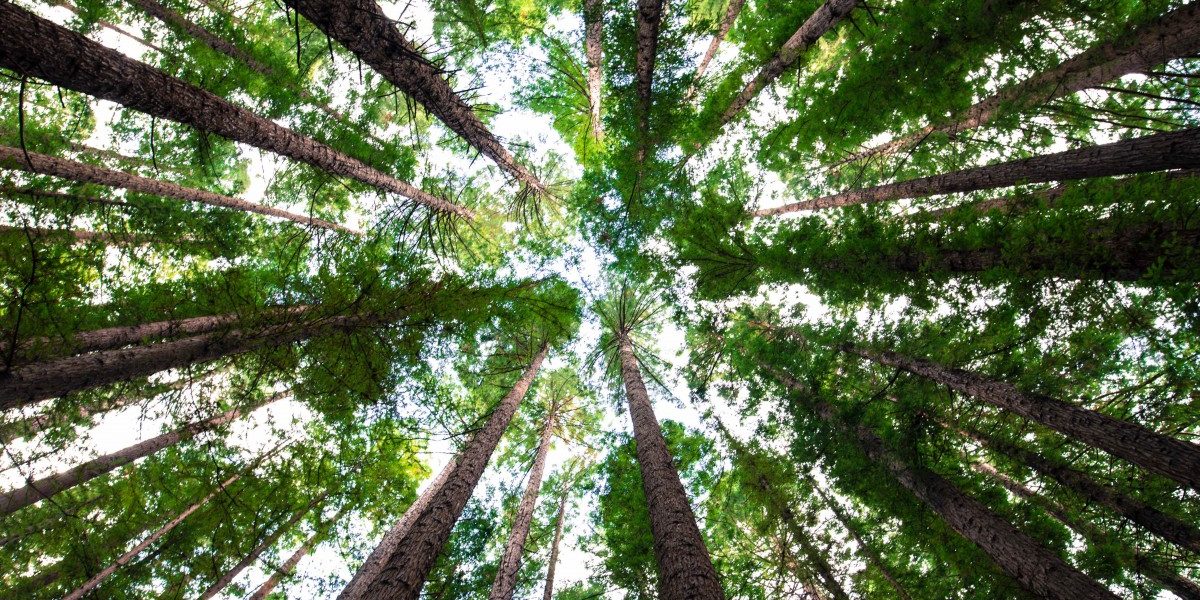 Bob Marra navigated his way to the back of a dusty barn in Hamden, Connecticut, belonging to the state’s Agricultural Experiment Station. There, past piles of empty beehives, on a wall of metal shelves, were stacks of wooden disks – all that remains of 39 trees taken down in 2014 from Great Mountain Forest in the northwest corner of the state.

These cross-sections of tree trunks, known as stem disks – or more informally as cookies – are telling a potentially worrisome tale about the ability of forests to be critical hedges against accelerating climate change. As anyone following the fires burning in the Amazon rainforest knows by now, trees play an important role in helping to offset global warming by storing carbon from atmospheric carbon dioxide – a major contributor to rising temperatures – in their wood, leaves, and roots. The worldwide level of CO2 is currently averaging more than 400 parts per million – the highest amount by far in the last 800,000 years.

But Marra, a forest pathologist at the Experiment Station with a Ph.D. in plant pathology from Cornell University, has documented from studying his fallen trees that internal decay has the capacity to significantly reduce the amount of carbon stored within.

Also read: What Trees Cannot Do

His research, published in Environmental Research Letters late last year and funded by the National Science Foundation, focused on a technique to see inside trees – a kind of scan known as tomography (the “T” in CAT scan.) This particular tomography was developed for use by arborists to detect decay in urban and suburban trees, mainly for safety purposes. Marra, however, may be the first to deploy it for measuring carbon content and loss associated with internal decay. Where there is decay there is less carbon, he explains, and where there is a cavity, there is no carbon at all.

“What we’re suggesting is that internal decay in trees has just not been properly accounted for,” says Marra. 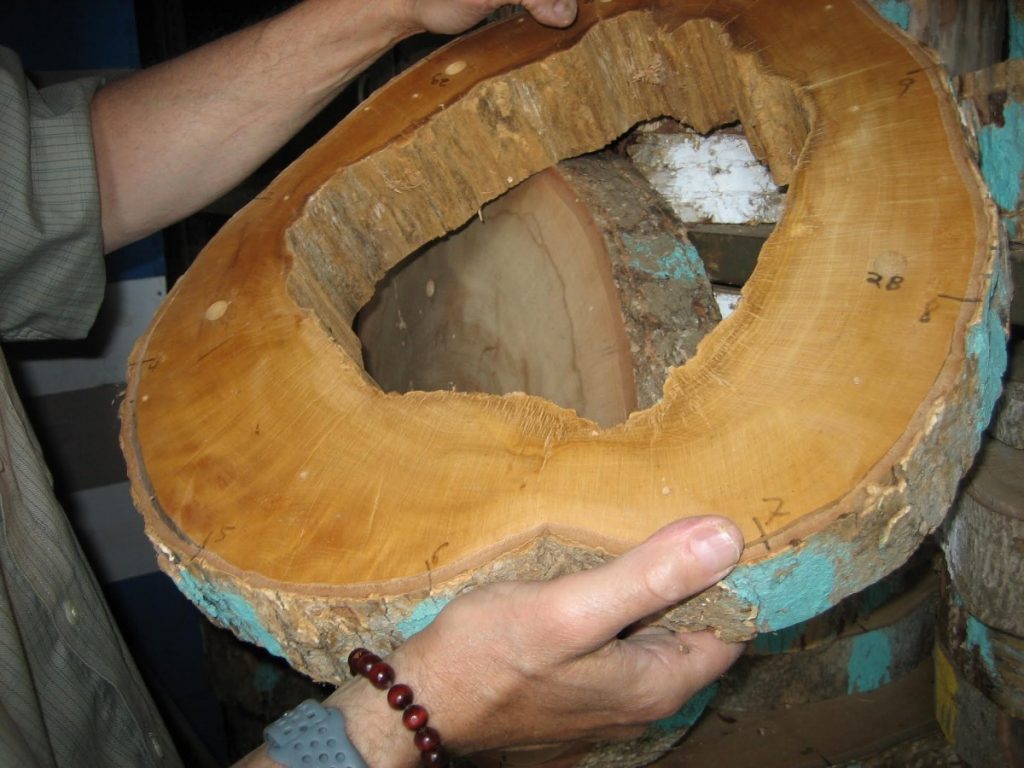 This tree trunk section, or cookie, shows a large hollow in the centre. Marra argues that traditional methods can miss such decay, and therefore overestimate how much forests will contribute to storing carbon. Photo: Jan Ellen Spiegel

While the first round of his research was a proof of concept that necessitated the destruction of 39 trees to show that tomography is accurate, his ultimate goal is a nondestructive technique to enable better assessments of carbon sequestration than those done annually by the US Forest Service. Under the United Nations Framework Convention on Climate Change, ratified in 1994, governments are required to report annual estimates of carbon holdings in all their managed lands. The most recent Forest Service figures show that US forests offset about 14% of the nation’s carbon emissions each year.

The Forest Service estimates that carbon makes up 48 to 50% of a tree’s biomass, so ones with decay will be less dense and therefore hold less carbon. But Marra contends that the visual signs monitored by the Forest Service, such as canopy and tree size, along with conspicuous problems such as lesions or cankers, don’t accurately reflect internal decay – a tree that looks healthy may have decay and one that appears problematic may be fine inside.

In addition, he says, foresters typically use a mallet to hammer a tree to register a sound that might indicate it’s hollow. “You know that there may be a hollow, but you don’t know how big the hollow is,” Marra says. As a result, he believes the government’s baseline data used to estimate carbon storage are not accurate.

“There are a lot of ways to improve our estimates of carbon being stored above ground in forests, and this decay component could certainly prove to be important,” says Andrew Reinmann, an ecologist and biogeochemist with the City University of New York’s Advanced Science Research Centre. But, he added, “We haven’t really had the technology to explore this before – it’s still a little bit of an unknown.”

Marra used a two-stage system for his research: sonic tomography, which sends sound waves through the tree, followed by electrical resistance tomography, which transmits an electric current. Both processes are necessary to fine-tune each other’s readings.

The system, which costs about $25,000 and fits in a backpack, is cheap and small by scientific equipment standards. Each reading takes no more than a few minutes and computerised visual renderings of the results appear instantly.

Marra experimented with three northern hardwoods – sugar maple, yellow birch, and American beech – and included more than two dozen of each, along with some control trees with no decay. The researchers analysed the lower bole – the first two metres or so – of each tree, which is the oldest part and closest to the soil, where most decay-causing fungi would come from. 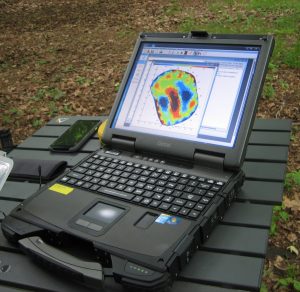 A dozen or so nails were tapped in a circle around the trunk and connected by cables to the tomograph; a sonic hammer then activated the system to get sound-wave measurements.

For the electric resistance tomography, a second set of nails was hammered between the first, and electrodes – plus and minus – were attached to each.

The various nail areas were painted in different colours to enable the computer renderings to be aligned later with photographs of the cookies after the trees were cut down.

The cookies, about 4 inches thick and which Marra called “the truth,” were only taken from where the measurements were made – the areas with the paint markings.

“One thing to sort of mitigate against this failure, if you want to call it that — these were very small cavities,” Marra says of the ones the tomography missed. “So they would have very little impact on a carbon budget.” 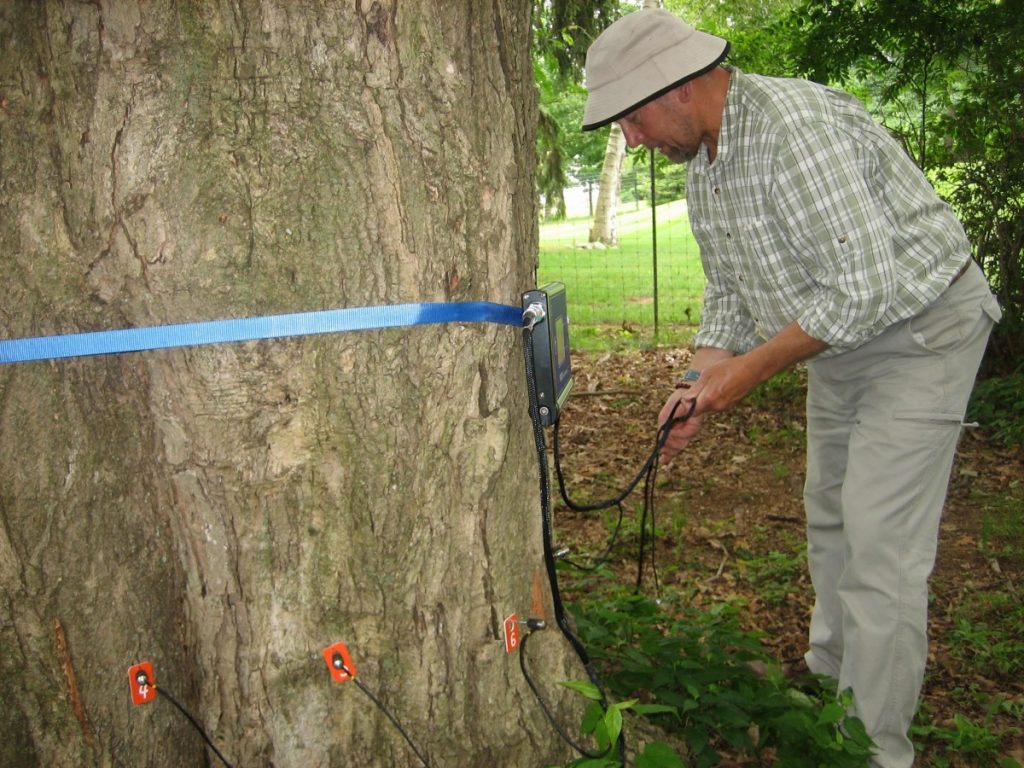 Marra readies a tree for scanning with electrodes and a tomograph. Photo: Jan Ellen Spiegel

Then came the time-consuming process of measuring the actual amount of carbon in each tree. After air-drying the cookies for a year, the wood from 500 drilled holes was sent to a gas chromatography lab at the University of Massachusetts to determine the carbon levels.

The tomography and lab results were then combined to calculate how much carbon was stored in the lower boles and to contrast that with the levels if the trees had been solid wood. Those calculations took until 2017 to complete.

“You’re looking at anywhere from a 19% to a 34% carbon loss” for an actively decaying tree among those studied, Marra says. “But any place there’s a cavity you’ve lost all of your carbon.”

The upshot of his five years of research, says Marra, is that accurate tomographic readings are possible in just a few minutes. “And what our tomography tells us is the carbon content,” he says.

At the same time, Marra is aware that tomography is not a practical substitute for the Forest Service’s carbon estimate system – which itself is a clunky and labor-intensive slog. But it could provide a valuable way to augment those estimates.

“Those are very, very impressive results,’’ says Kevin Griffin, a tree physiologist at Columbia University and its Lamont-Doherty Earth Observatory. “They obviously have obtained a lot of precision in the techniques.”

“The results are important,” he adds, “but whether internal tree decay is the single most burning question? Probably not. There’s probably bigger fish to fry before we get there.”

Among them, he says are forest growth rates and overall tree health and age, as well as the impact of harvesting and other kinds of losses, including disease.

A tree’s architecture and height could also play large roles in carbon sequestration, says Reinmann of the City University of New York’s Advanced Science Research Centre, as could the makeup of the forest landscape. His own research, for instance, found trees grow faster and have more biomass at the edge of fragmented forest.

Even so, Weiskittel and others – including Marra – say the research needs to be scaled up to many more tree types and full forests. For his part, Marra would like to sample forests randomly with many more trees and controlling for factors including species, age, and soil characteristics.

The goal, he says, is to develop a methodology for generating data to provide better carbon estimates for more than three tree types in one small part of the country.

“We need to use tomography to refine models so we’re more accurately assessing the role that forests are playing as sequesterers or climate change mitigators,” Marra says. “We don’t want to be over-estimating the roles that they play.”

Jan Ellen Spiegel is a freelance writer and editor based in Connecticut. Her work appears regularly in numerous local and national publications, including The Connecticut Mirror, InsideClimate News, Yale Climate Connections, and The New York Times.

This article was published on Undark. Read the original here.