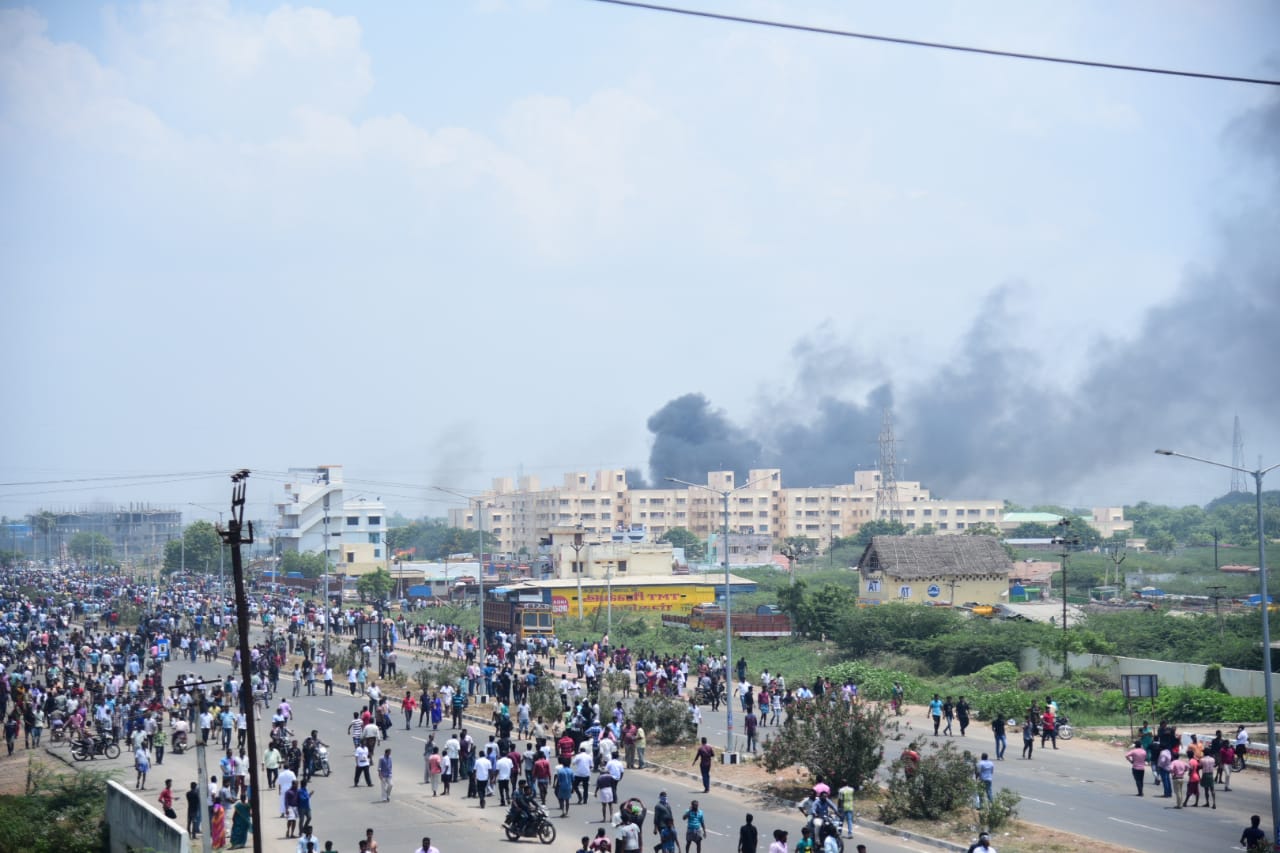 Smoke billows over Thoothukudi after protests demanding the closure of Vedanta's Sterlite Copper unit entered the 100th day on May 22, 2018. Credit: Surya, Tuticorin

Thoothukudi: In an unprecedented turn of events, at least 11 protesters were killed on May 22 in Thoothukudi after police opened fire at the protest rally demanding the closure of the Sterlite unit in the town. The protest by the people of Thoothukudi against Sterlite, which they have claimed is polluting the town and resulted in a higher incidence of cancer, had reached its 100th day on May 22.

This is the first time the Tamil Nadu government has responded to the protests.

Activists allege that three rounds of firing at different places by the police were only an attempt to “dilute the protests”. “There was an even bigger protest on March 24 in Tuticorin against Sterlite. But it was peaceful,” says Henry Tiphagne, the executive director of People’s Watch; he was present on the spot. “It is unfortunate that the state has failed to gauge the public mood. The people were angry but not violent. Certainly they were not angry against the government.”

Tens of thousands of protestors had gathered near V.V.T. signal in Thoothukudi on the morning of May 22 for a rally towards the Collectorate, demanding that the Sterlite unit be closed. While the rally had been announced at least 20 days ago, the district collector N. Venkatesh had issued an order imposing section 144 the previous day.

“It is pre-planned, cold blooded murder,” says T. Velmurugan, leader of the Thamizhaga Vaazhvurimai Katchi, a local political party. “The police obviously want to quell the protests. We have reasons to believe that they have been bought over by Sterlite.”

Sources said the police had already planned to open fire and intended to kill the protest’s organisers. “It was indiscriminate and random. There was no warning from the police that they were going to open fire” Tiphagne said. “The protest, which was at first peaceful and included a diverse gathering including persons with disabilities and transgender persons, soon turned violent as a result of the police shooting at the Collectorate. As soon as people found out that fellow protesters were shot dead by the police and several others were left injured, they resorted to violence. The protesters began to target their violence towards the Sterlite Housing Quarters, which was located right beside the Collectorate.”

Among those killed in the police firing was Thamizharasan, a leader of the Puratchikara Ilaignar Munnani (Revolutionary Youth Front); he was one of the organisers of the protests. Visuals of policemen atop vehicles opening fire pointedly targeting the protestors have emerged, lending credence to speculation that the firing was pre-planned.

Nityanand Jayaraman, of the Chennai Solidarity group, termed the state’s response “brutal”. “The district has now been brought under police control. The idea is to clearly kill the protests. It is sad that the state is undermining the protesters.”

There is palpable fear in several villages around Thoothukudi. “We have been hearing that police has been indiscriminately going into villages and threatening people. People fear there could be violence in the night,” Velmurugan said.

With apparent pressure on news channels to ‘limit’ the coverage of rioting, there are still conflicting reports on the number of deaths. While Chief Minister Edappadi Palanisamy claimed nine were killed in the protests, a statement issued by Bhanwarilal Purohit, the governor, put the number at 11. Sources in Thoothukudi said the number could be much higher. “The police have just begun to go home by home enquiring if they are related to any of the deceased,” one journalist in the town said.

D. Jayakumar, the state fisheries minister, called the firing “inevitable” even as the chief minister appealed to the people to maintain calm. Palanisamy had also announced a one-person judicial commission to probe the killings. A solatium of Rs 10 lakh has been announced for the families of those killed.

However, activists summarily rejected the idea of a judicial enquiry into the killings. Tiphagne suggested that the National and State Human Rights Commissions should conduct a suo moto enquiry into the killings. Stalin Rajangam, a Dalit scholar, pointed out how judicial commissions of the past have only helped governments protect themselves, “legally and documentary wise”.

“From Kila Venmani in 1968, the victims have never been served with justice in any case of violence,” he said. “In 1999, 17 labourers drowned to death in Thamiraparani river (in Tirunelveli). They entered the river to escape police lathi charge and firing. They were only protesting seeking the release of fellow labourers of Manjolai estate, arrested for demanding better wages.”

“More recently, in 2011, six Dalits were killed in police firing in a rally to commemorate the memorial of Dalit leader Immanuel Sekaran. There were judicial commissions in all the cases but no justice for the victims,” he added..

Meanwhile, the Madurai Bench of the Madras high court is all set to pronounce its judgment in a case seeking a ban on the second plant being built by Sterlite. The petitioner, Professor Fathima, has approached the court saying the company had obtained an environmental clearance by providing fraudulent documents.