The state’s many riverside projects around Vijayawada and 'new' Amaravati have turned fish workers into daily wage labourers, probably on sites where their homes once stood. 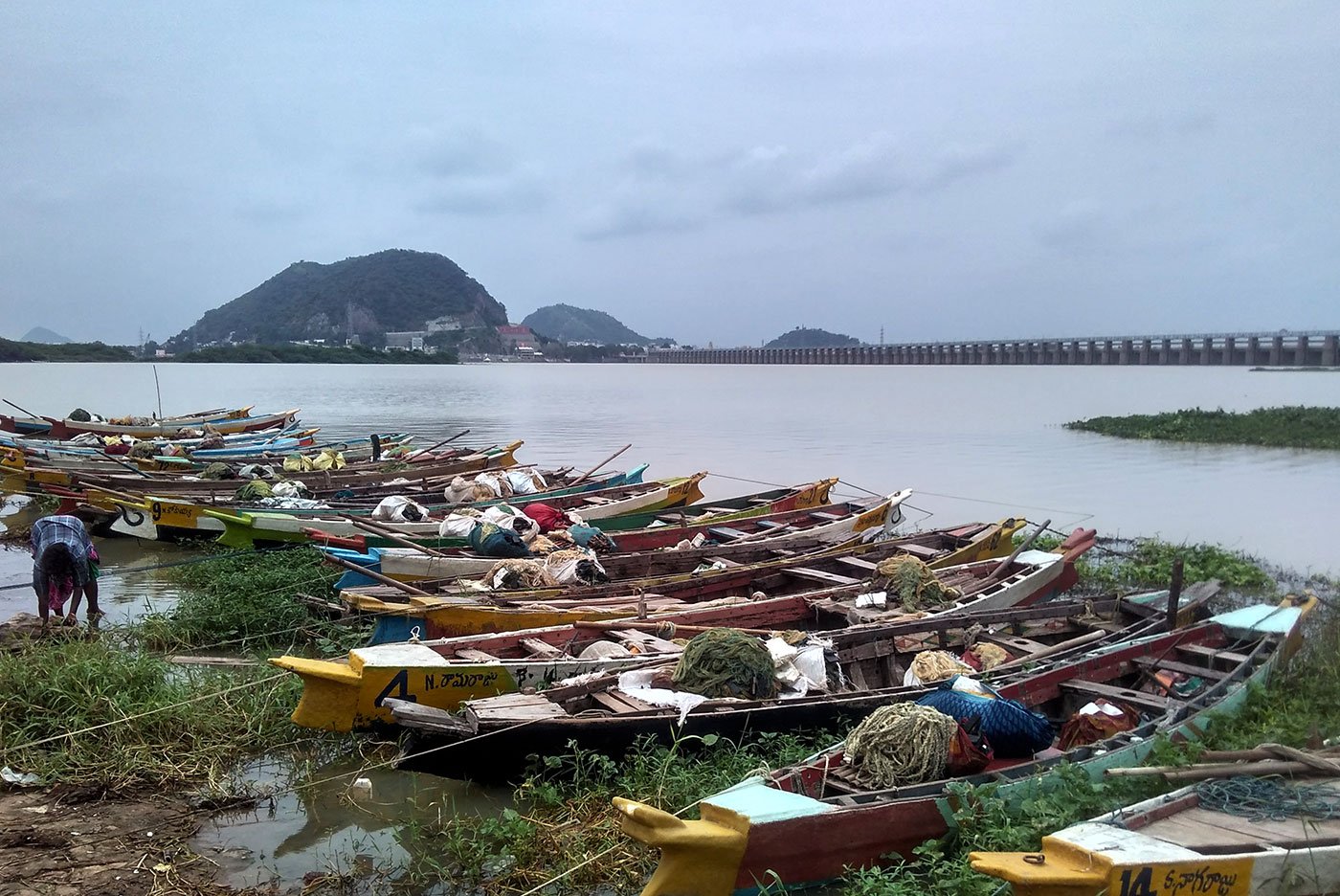 For over a year now, Kollati Narayana has been walking six kilometres every day from Jakkampudi village to Vijayawada city’s famous Punnami ghat, on the banks of the Krishna river. From around 10 am to 5 pm, he works here along with a few others, catching fish and selling them at the riverbank.

Narayana, 27, who is partially blind, then walks back home for another six kilometres. “I walk because I can’t spend Rs 40 on an autorickshaw,” he says. “I hardly earn Rs 50-100 per day.” His daughters, four and two years old, are also partially blind.

Narayana has been forced to do the 12 kilometre walk after the house on Punnami ghat, where he had lived since he was born, was demolished in mid-2016. That modest house belonged to his brother, to whom Narayana gave an occasional token rent. He now pays Rs 1,000 as rent for a house in Y.S.R. Colony in Jakkampudi. (His brother too moved there after the demolition, but the smaller space cannot accommodate Narayana’s family.)

In 2016, Kollati Narayana, a fisherman (left), and Lanke Maheshwari, a fish worker (right), were displaced from Punnami ghat in Vijayawada when the state demolished around 2,000 houses to build new ghats for a festival that occurs once every 12 years. Credit: Rahul Maganti

In June and July 2016, around 2,000 houses, most of them occupied by fish workers, were demolished in Vijayawada. In their place, more than 18 ghats were built for devotees coming for the Krishna Pushkaralu – a festival that occurs once every 12 years. The old Punnami ghat too was expanded from a small platform to a large space for visitors and devotees – it’s a ‘VIP’ ghat, very close to the Indrakeeladri temple of Goddess Kanakadurga.

The cleared area stretched for 20 kilometres along the river, starting from Ibrahimpatnam town near the Vijayawada-Hyderabad National Highway to the Prakasam Barrage. Chandrababu Naidu, the chief minister of Andhra Pradesh, spent at least Rs 1,000 crores (according to newspaper reports) of public money on the festival event.

A year after the festival, the ghats look deserted. Lanke Maheshwari, 60, Narayana’s neighbour at Y.S.R. Colony, who cleans fish at Punnami ghat, says “This has been a fishing market [and home to the fishing community] for 70 years. But on that day the bulldozers razed the walls of our houses to the ground. The bricks and dirt fell in our food plates. We also had a temple and a small shed to rest or save ourselves from getting wet in the rain. They removed everything.”

The scene at Punnami ghat (left) after the fish workers’ houses there were demolished. Their new homes in YSR Colony (right) in Jakkampudi village. Credit: Rahul Maganti

Most of the demolished houses did not have pattas (titles), and the state viewed them as ‘encroachments’ that don’t merit compensation. But after a series of protests by the families and people’s organisations at the site of the demolition, and when the adjacent national highway was blocked by protesters, in September 2016 the revenue department and collector asked each family to pay Rs 66,000 – this would entitle them to a house in Y.S.R. Colony. Those who could afford the amount, paid. Others, like Narayana, have been forced to pay rents they can barely afford.

Y.S.R. Colony was constructed by the state government under the Jawaharlal Nehru National Urban Renewal Mission. Many communities displaced by various infrastructure projects in and around Vijayawada are sent here. However, the infrastructure in the colony is poor as well – there are hardly any buses to the city, poor sanitation, and no government hospitals or schools nearby. 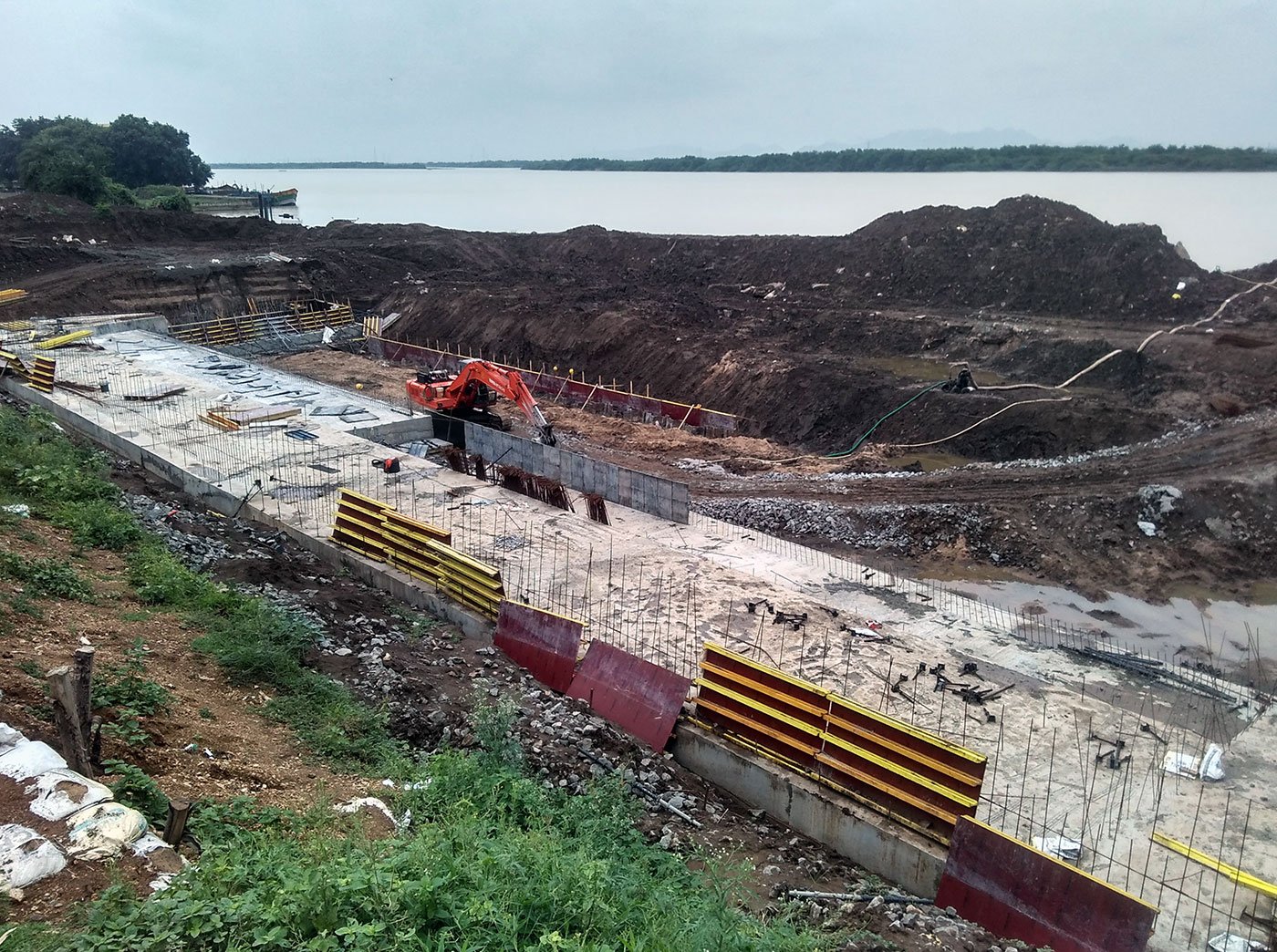 While Vijayawada is on the left bank of the Krishna river, which runs along the border between Krishna and Guntur districts of Andhra Pradesh, communities on the right bank are being displaced as well. Amaravati, the government’s new showcase riverfront capital, is on the right bank. Around 4,000 families of fish workers across ten fishing harbours might be moved from here. The ten villages where the harbours are located are home to around 50,000 people in total (according to documents of the Capital Region Development Authority).

Polakampadu is one of these ten harbours. In early 2017, the fish workers at this harbour – which now stands at the entrance of the new ‘world-class’ city – resisted being displaced for the Kondaveeti Vagu Flood Water Pumping Scheme by sitting on a relay hunger strike for 108 consecutive days. The scheme, to the south of Amaravati, with a total budget of around Rs 230 crores (according to the scheme’s documents), is aimed at keeping the capital region flood-free – this is the region that stretches from the Kondaveeti vagu (canal) to the banks of the Krishna. 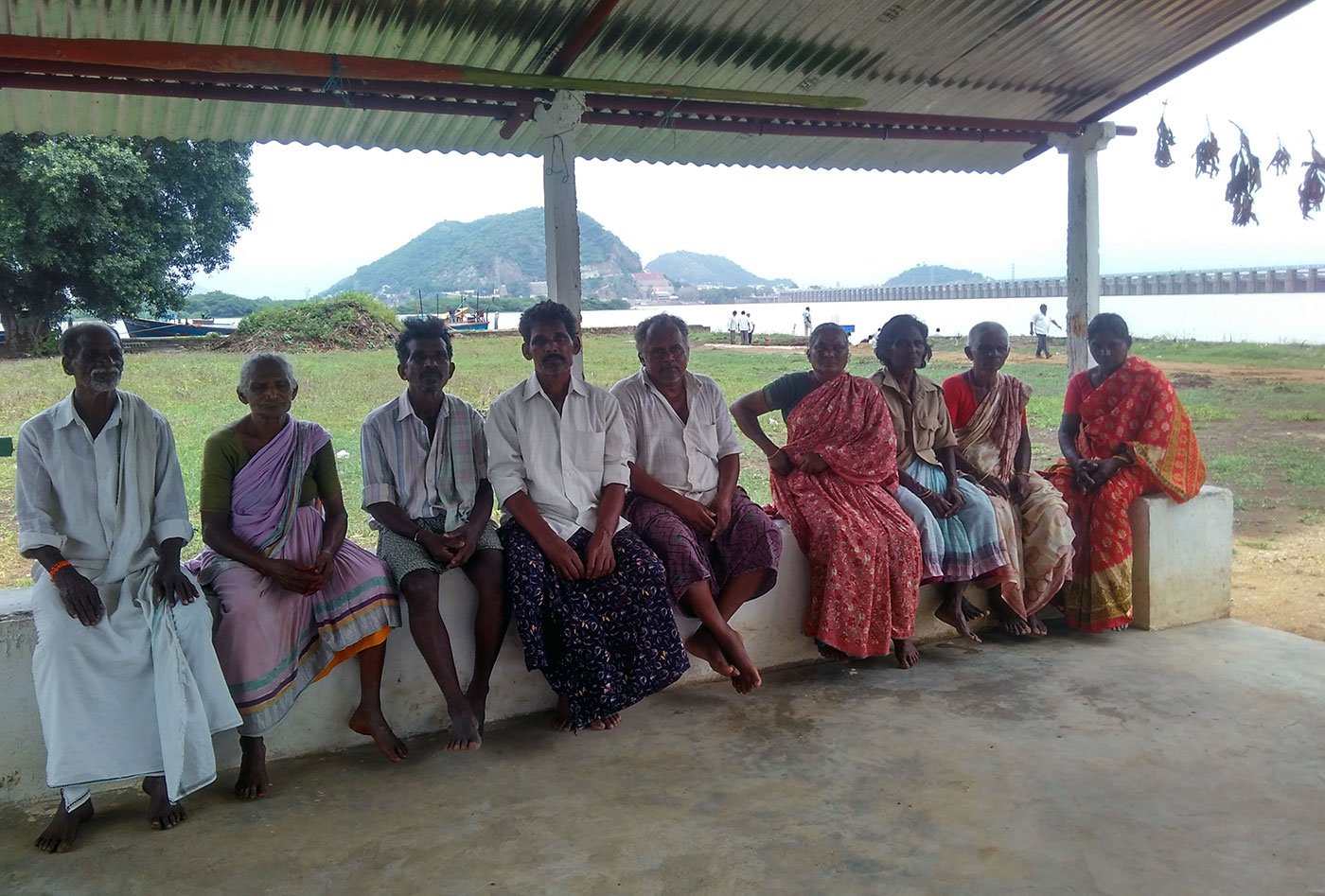 In 2017, the fish workers of Polakampadu village, went on a relay hunger strike for 108 days to resist displacement by the Kondaveeti canal scheme. Credit: Rahul Maganti

“It is foolish on the part of the government to first construct the capital in a flood-prone area and then [come up with] the Kondaveeti scheme to solve the problem of flooding,” says Ravula Mahalakshmi, 55, who earns a living cleaning fish at Polakampadu harbour, 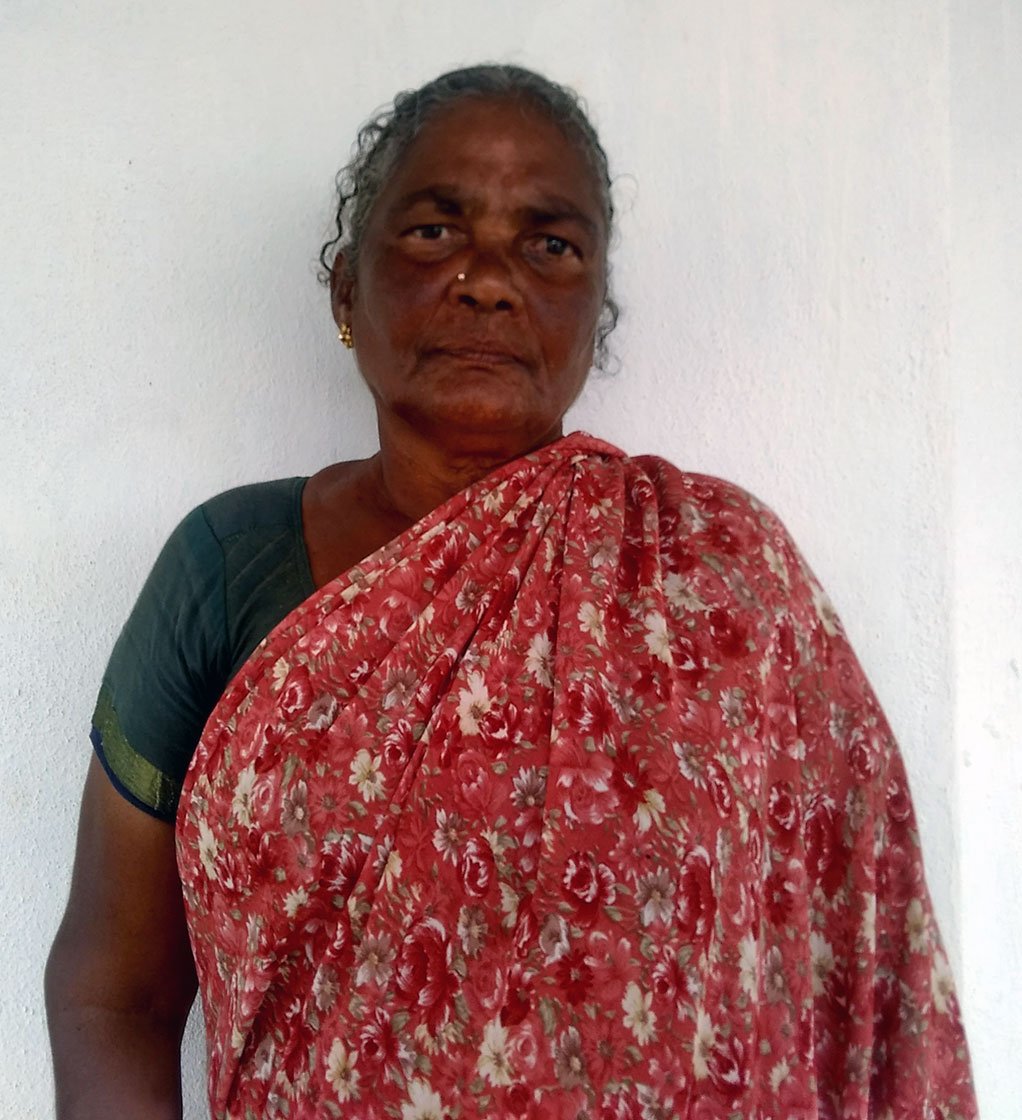 “I earn Rs 50 on a weekday and Rs 150 on Sundays,” she says. “But now hardly any fishes are left in the river [due to polluting industries upstream]…” Mahalakshmi’s two daughters – one is unmarried, the other is a divorcee – also lost their livelihoods after apartment complexes came up in the last two years as part of the new capital city, replacing the fields where they worked as agricultural labourers. “We used to share a good fish with our neighbours in the past. We no longer do that and instead sell all the fish. Even then, we don’t earn enough,” Mahalakshmi says.

“The actual reason for the Kondaveeti vagu scheme is that the CM doesn’t want labourers [and fishermen] to live at the entrance of his world class city for people in suits and boots with fancy cars. He wants to drive us out and this scheme is just an excuse for that,” says Venkata Narayana, the president of the Polakampadu Fishermen Cooperative Society (set up in 1954). Around 400 fishing families from the villages of Tadepalli, Undavalli and Seethanagaram in Guntur district are members of this society, one of 10 fishing such societies in the area.

As a part of the Kondaveeti canal scheme, a thriving two-acre harbour and market space with ten sheds was demolished in January without any known official plans to resettle or compensate the fish workers. After the displaced families protested, the state government promised compensation – Rs 50,000 per boat, and each woman whose income came from cleaning fish would be given Rs 25,000. No money has been given so far.

Venkata Narayana is the president of the Polakampadu Fishermen Cooperative Society; its shed was rebuilt after a round of demolitions. Credit: Rahul Maganti

The government also allotted around an acre as alternative space for the Polakampadu harbour and market, some 200 metres upstream. But a part of that has been occupied by a political leader, who has fenced the plot. And except for one makeshift shed, there is no infrastructure at the new location to support the daily lives and livelihoods of the fishing community.

Other plans for Amaravati are also in motion – including water parks and weekend getaways on the riverbank. Meanwhile, with fewer fish in the river, the main source of income of the fish workers is already drying up. “Of the 400 fishermen in our society, hardly 100 [continue to] fish,” says Venkata. “The rest mostly work as daily wage labourers at construction sites in Vijayawada and Guntur.” Probably at the same sites that are crushing their own lives.

This article was originally published on PARI on October 18, 2017. Read the original here.