An Overview of the Gardens Under the Sea

Seagrasses form the basis of one of the most productive ecosystems of the world, providing food and shelter to a diverse community of animals. Seagrasses are marine flowering plants, found on all continents except Antarctica. They have roots, stems and leaves and produce flowers and fruits. They are closely related to land plants, and probably evolved from land-living angiosperms (flowering plants) millions of years ago. The closest relatives to seagrass, on land, are the monocots – grasses, lilies and palms.

Where are seagrasses found?

Seagrasses are found along the coast, in clear, shallow waters that allow light for photosynthesis, to penetrate. Some species occupy the intertidal zone, the area between the highest tide line and lowest tide line, from which the sea retreats at low tide to expose the seabed. These species, like Halodule wrightii and Cymodocea rotundata, grow close to the mangrove belt and can survive exposure to heat and dryness thanks to the high humidity. Seagrasses from the genus Thalassia are found on stable substrates in the intertidal.

Other species of seagrasses, like some Halophila and Halodule species and Enhalus acoroides (tape grass), are always found submerged underwater in the sub-tidal zone. Zostera or eelgrass occurs in estuarine areas, mostly in European waters.

When conditions are suitable, seagrasses form dense underwater ‘meadows’ – some of which are large enough to be seen from space.

How many seagrass species are known?

There are 72 different species of seagrasses in the world, belonging to four families. Compared to land plants, which have much higher rates of species diversity, the number is not high.

“It is a huge challenge to evolve the capability to tolerate salt water and live in a submerged environment,” said Frederick Short, a marine biologist from the University of New Hampshire and director of SeagrassNet, a global seagrass monitoring network.

The tropical waters of the Indo-Pacific hold the highest diversity of seagrasses in the world, supporting 14 different species. This is probably because seagrasses “evolved first in this part of the world,” said Short. “Seagrasses in this region have had a longer time to diversify — and because of the excellent growing conditions,” he added.

India, being in the Indo-Pacific region, has high seagrass diversity: 14 species belonging to 7 genera. The Gulf of Mannar and Palk Strait house all the 14 species found in India, while the Lakshadweep and Andaman and Nicobar Islands have 8 and 9 species respectively. 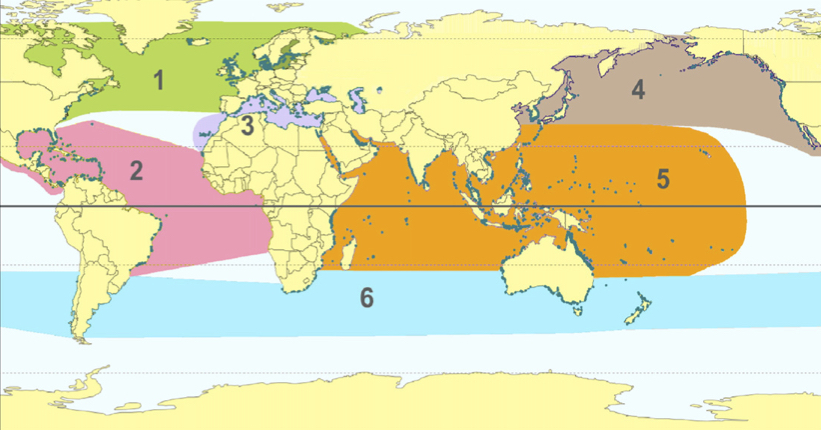 How do seagrasses exchange gases with the surrounding water, i.e., ‘breathe’?

Land plants have small pores on their leaves called stomata, through which they can take in carbon dioxide from the air and release oxygen. Seagrasses lack stomata. Instead, they have a thin cuticle layer which allows gases and nutrients to diffuse directly into the leaves from the surrounding water.

How do seagrasses reproduce?

The seagrass produces male and female flowers, much like its land-living cousins. Male seagrass flowers produce some of the biggest pollen known to the plant kingdom: up to 5 millimetres long. That’s smaller than the nail on your little finger but rather large by pollen standards. Male flowers release pollen, usually covered by mucilage, into the surrounding water and depend on the water currents to carry them over to the female flowers. If you think this is a bit random, remember that some seagrass meadows are so extensive that they can be seen from space! Chances are pollination does occur.

Also Read:Scientists Warn of a Looming Mass Extinction of Species

Some seagrasses are also known to recruit the help of tiny marine invertebrates like amphipods (tiny shrimp-like creatures) and polychaetes (marine worms) for pollination. The fleshy, buoyant seeds that form can float along and establish themselves in suitable seabeds to start off meadows of their own.

If all that shazam didn’t work, seagrasses have a more dependable method to propagate. They go the asexual way, using their massive rhizomes — modified underground stems like ginger and turmeric. These rhizomes spread along the seabed and put out new roots and shoots. Which means a single plant can colonise a large area of seabed, and live on for thousands of years.

What are the ecosystem services that seagrasses provide?

Dense seagrass growth traps flowing sediment and nutrients and creates a world where life can thrive. Seagrasses form the basis of one of the most productive ecosystems of the world, providing food and shelter to a diverse community of animals. The leafy canopies support a bewildering diversity of tiny plants that grow as epiphytes (like moss on trees) and small marine invertebrates, which in turn attract sea anemones and fish, and megaherbivores like green sea turtles and dugongs.

The seagrass meadows with their extensive rhizome and root systems, and leaf growth and epiphytic growth together accumulate a huge amount of biomass.

Also Read: The Meghalayan Plateau Is a Geological Marvel Under Ecological Threat

What are the main threats to seagrasses?

“Seagrass meadows are experiencing rates of loss that may be as high as 7% of their total global area per year,” notes a 2010 study. The natural causes of seagrass destruction are cyclones, intensive grazing, fungal and other infestations and disease. Seagrasses in the intertidal habitat are prone to drying out. In estuaries, increased freshwater incursion and siltation can also destroy seagrass beds.

However, the most significant threat is (you guessed it) from human activities. Large amounts of pollutants, including chemicals and excessive nutrients like fertilisers, wash off the coast and directly into seagrass beds, causing algal blooms that can block off sunlight. Sediments can choke the leaves and dredging can completely fragment seagrass meadows. Boat anchors and large marine debris can kill sections of seagrass meadows.

Overfishing also causes a chain reaction, disturbing the seagrass food web in multiple ways. Without fish, sea urchin population explodes, and they can overgraze the meadows. When large carnivorous fish like sharks are removed, intermediate predators that eat invertebrates become more abundant, wiping out helpful pollinators and other small creatures. An increase in herbivorous fish also kills off the seagrasses.

A recent, serious threat to seagrasses across the world are marine heatwaves. Similar to the heatwaves on land, these are not a gradual increase in sea temperature but rather a sudden spike in temperature, a discrete warming event. Such events are all set to increase during this century. They have already started: there was the “record-breaking ‘Ningaloo Niño’ (2010–2011) off Western Australia, the long-lasting ‘Blob’ (2013–2016) in the northeast Pacific and El Niño-related extreme warming in 2016 that affected most of the Indo–Pacific,” write an international team of scientists in their 2019 study.

The same study has looked at data since 1925 and found that the number of marine heatwaves has increased around the world, throughout the 20th and early 21st centuries. The study predicts that taxa that cannot move, like coral reefs, seaweed beds and seagrass meadows, are at maximum risk from marine heatwaves. Longterm time series data from Western Australia have shown that an increase in the number of days with marine heatwaves is correlated with decreased seagrass density.

Is seagrass used in sushi?

No, it is not. Sushi is made from seaweed, another denizen of the shallow coastal waters — but the similarities end there. Seaweed is algae that attach to the seabed and let nutrients diffuse in from the surrounding water.