A Brazilian NGO said the fires are directly connected to deforestation and did not find any evidence to argue they could be a consequence of a lack of rain.

Smoke billows during a fire in an area of the Amazon rainforest near Porto Velho, Rondonia State, Brazil, Brazil August 21, 2019. Photo: REUTERS/Ueslei Marcelino

Forest fires have dramatically increased in the Brazilian Amazon this year in the wake of soaring deforestation rates, raising concerns among environmentalists about the fate of the planet’s largest tropical forest.

The number of active fires amounted to 74,155 between January 1 and August 20, a spike of 85% compared to the same period in 2018, according to data from the Brazilian National Institute of Space Research (INPE). Roughly half the fire occurrences this year were registered in the last 20 days, INPE data showed.

In a technical note released in the evening of August 20, the Brazilian NGO IPAM (Institute of Environmental Research in Amazonia) said it didn’t find any evidence to argue that the fires could be a consequence of a lack of rain.

Alencar, who co-authored the technical note, stressed that these are not wildfires, but human-made fires that happen every year targeting specific areas. According to her, these type of fires are a common last stage of the deforestation process in the Amazon region.

“They cut the trees, leave the wood to dry and later put fire to it, so that the ashes can fertilize the soil,” she explained, adding that when the rains come, pasture grass flourishes in the short term from the nutrients left by the ashes. 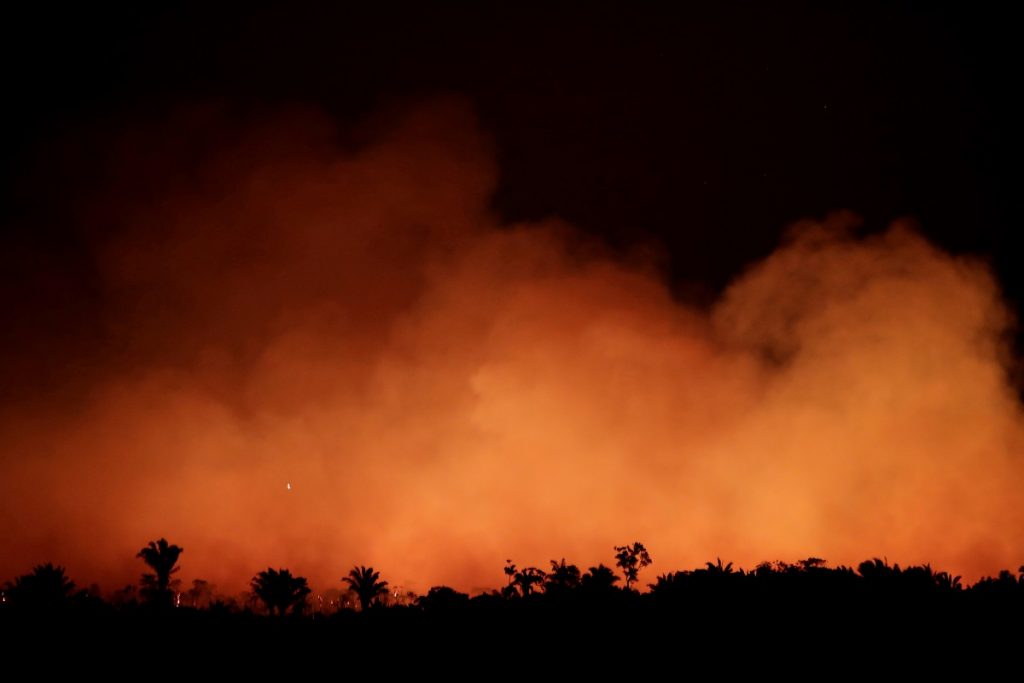 Far-right President Bolsonaro reacted on August 21, suggesting that members of NGOs could be behind the fires, Folha de São Paulo newspaper reported.

“There could be… a criminal action by these members of NGOs to call attention against me, against the government of Brazil,” Bolsonaro reportedly said in the interview, which was released by the government on social media afterwards.

According to him, the move could be retaliation against the government for having caused the suspension of a $33.2 million payment from Norway to the Amazon Fund, the newspaper reported.

Fires in Brazil came to spotlight since the afternoon of August 19, when São Paulo’s skies suddenly turned black, triggering “Amazon Fires” to trend widely across Twitter under the hashtag #PrayforAmazonas and spurring discussion about the linkage between the fires and the phenomenon.

Media outlets soon reported that the cause of such an unusual event was the combination of two interrelated phenomena. The first one was the arrival of a cold mass of air, which increased the amount of low clouds and fog over the city. The second is as the cold front expanded, a change in the wind patterns brought into the city smoke from forest fires in the Amazon region and other parts of South America, thousands of miles away.

Brazil’s President Jair Bolsonaro and his wife Michelle wave as they drive past before his swear-in ceremony, in Brasilia, Brazil January 1, 2019. Credit: Reuters/Ricardo Moraes

The formation of this “smoke corridor”, as it is called, depends on several factors, experts say.

“There are always fires this time of the year. But the smoke corridor doesn’t form every year for reasons that include the number of fires and its intensity, the type of fuel, the humidity of the soil and meteorological issues,” Santiago Gassó, a researcher at NASA explained to UOL Noticias.

The situation is especially dire in the Amazon region. The state of Acre and parts of the state of Amazonas have declared the state of emergency to fight the fires.

What worries scientists is that this hasn’t been an atypical year in terms of climate events. There haven’t been any extreme droughts or meteorological events such as El Niño, which are typically associated with a sharp increase in fires like the region experienced in 1998, 2005, and 2015.

According to Alencar, this year the fires have started earlier. Landowners usually slash and burn their lands about a month before the onset of the rains. But the rains won’t start before late September – later in more northern parts of the Amazon.  “It could mean that there is going to be a lot more fire ahead.”