Wildfires are common in the dry season, but are also deliberately set by farmers illegally deforesting land for cattle ranching. 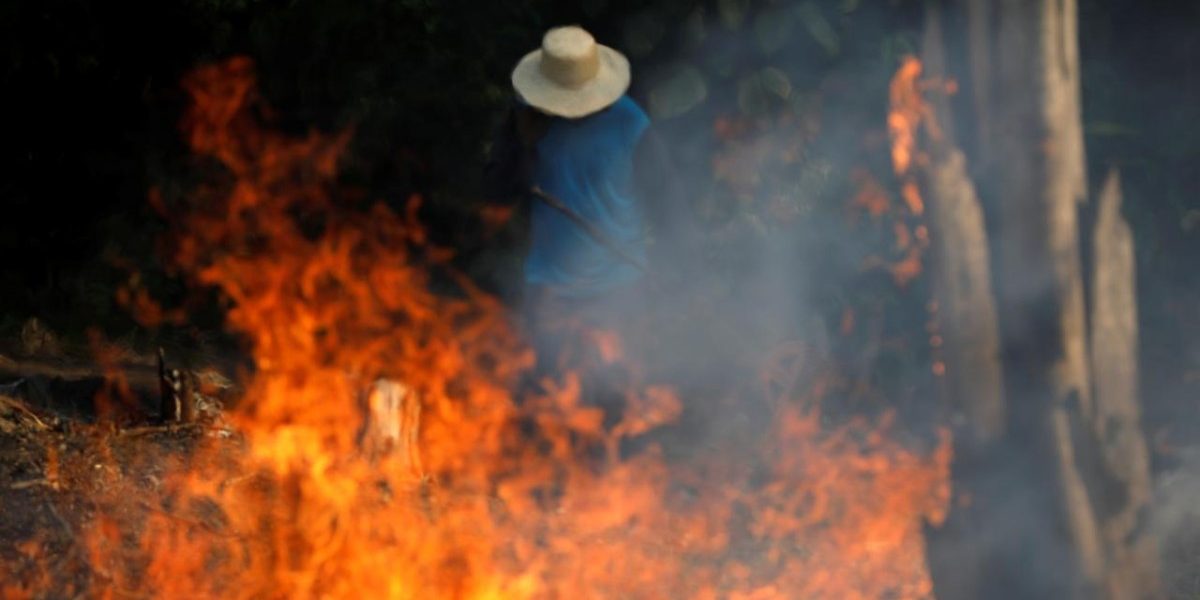 A man works in a burning tract of Amazon jungle as it is being cleared by loggers and farmers in Iranduba, Amazonas state, Brazil August 20, 2019. Photo: REUTERS/Bruno Kelly

The surge marks an 83% increase over the same period of 2018, the agency said on Tuesday, and is the highest since records began in 2013.

Images show the northernmost state of Roraima covered in dark smoke. Amazonas declared an emergency in the south of the state and in its capital Manaus on August 9. Acre, on the border with Peru, has been on environmental alert since Friday due to the fires.

Wildfires have increased in Mato Grosso and Para, two states where Brazil’s agricultural frontier has pushed into the Amazon basin and spurred deforestation. Wildfires are common in the dry season, but are also deliberately set by farmers illegally deforesting land for cattle ranching.

The unprecedented surge in wildfires has occurred since Bolsonaro took office in January vowing to develop the Amazon region for farming and mining, ignoring international concern over increased deforestation.

Asked about the spread of uncontrolled fires, Bolsonaro brushed off criticism, saying it was the time of the year of the “queimada” or burn, when farmers use fire to clear land.

“I used to be called Captain Chainsaw. Now I am Nero, setting the Amazon aflame. But it is the season of the queimada,” he told reporters.

On Wednesday, Bolsonaro claimed without presenting evidence, that non-governmental organisations could be burning down the Amazon rainforest to bring shame on his government after he cut their funding.

Bolsonaro said “everything indicates” that NGOs are going to the Amazon to “set fire” to the forest. When asked if he had evidence to back up his claims, he said he had “no written plan,” adding “that’s not how it’s done.”

He pointed out that his government had slashed NGO funding, which he claimed may be a motive for NGOs burning down the forest as they seek to bring infamy to his government.

“Crime exists,” he said during the Facebook Live. “These people are missing the money.”

Space agency INPE, however, said the large number of wildfires could not be attributed to the dry season or natural phenomena alone.

“There is nothing abnormal about the climate this year or the rainfall in the Amazon region, which is just a little below average,” said INPE researcher Alberto Setzer.

People frequently blame the dry season for the wildfires in the Amazon, but that is not quite accurate, he said.

“The dry season creates the favourable conditions for the use and spread of fire, but starting a fire is the work of humans, either deliberately or by accident,” Setzer said.

Bolsonaro recently fired the director of INPE after he criticised agency statistics showing an increase in deforestation in Brazil, saying they were inaccurate.

“I am waiting for the next set of numbers, that will not be made up numbers. If they are alarming, I will take notice of them in front of you,” he told reporters.