In the face of government infighting and indifference, various citizen movements are drawing attention to the climate emergency. 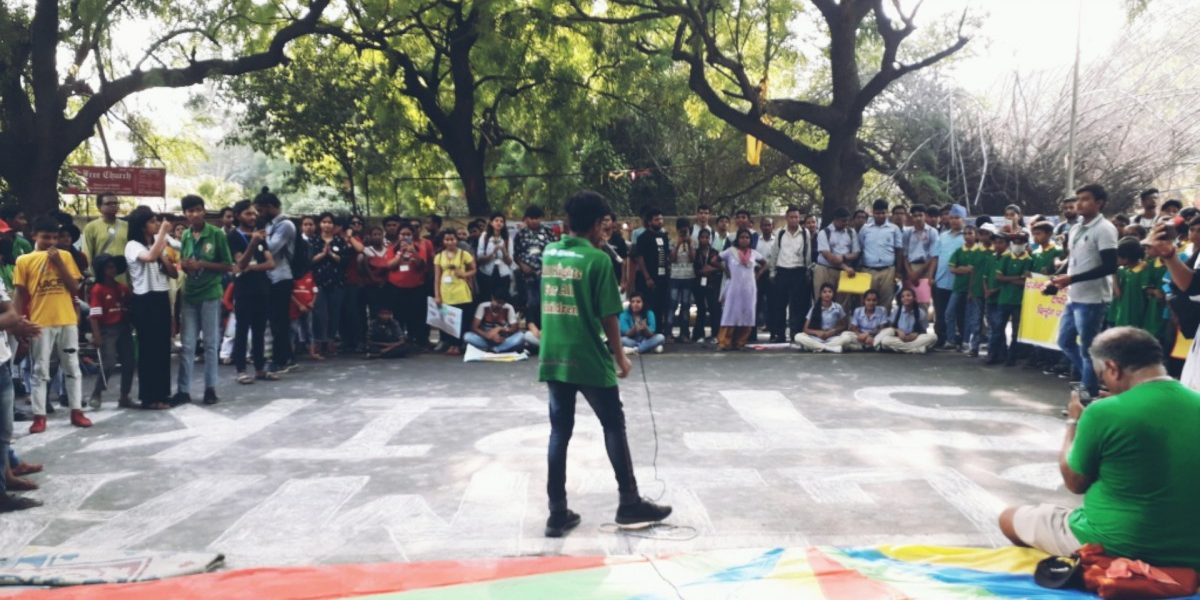 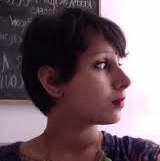 New Delhi: On Wednesday, June 5, a crowd of children gathered around a beatboxer at Jantar Mantar, cheering on in the punishing heat of 3 pm. With 2019 being the hottest recorded year in human history, North India is in the grip of a heatwave that has killed five people. The young beatboxer wiped the sweat dripping into his eyes. At his feet chalk declared: ‘CLIMATE STRIKE’.

While Delhi’s ‘designated protest site’ sees steady footfall, what was unusual on this World Environment Day, is that the protestors were mainly children. And they’re really clued in.

The UK recently went two weeks without generating any power from coal and plans to shut down all fossil fuel plants by 2019. 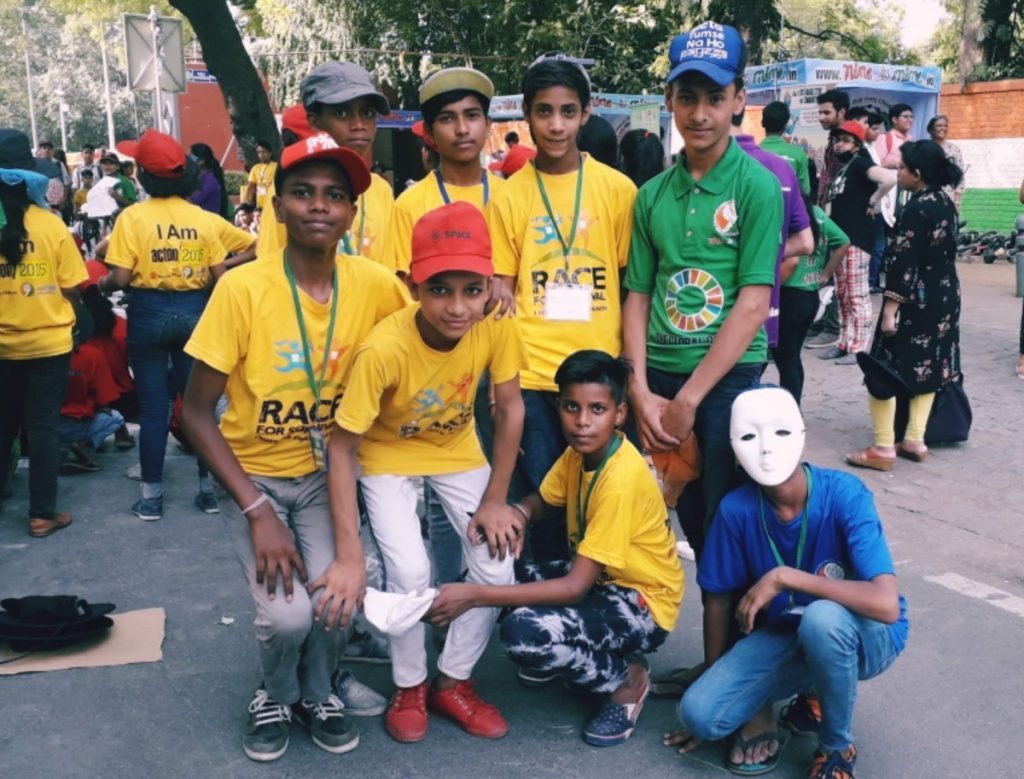 They’re referring to the UN IPCC’s landmark report last year, warning we only have 12 years to cut fossil fuels before it’s too late. Too late meaning drought, floods, heat and extreme poverty for millions. Over 40% of India is currently facing severe drought, while groundwater is depleting at an alarming rate.

Steve Rocha, of Wada Na Todo Abhiyan has been working on government accountability and child rights for nine years. Last month, he coordinated with 38 schools to send students for the second global climate strike in Delhi. “Political parties need to recognise children as active participants of Indian society,” he says. “They may not have a vote yet, but they have a voice. Why should dissent only be for adults?”

The Centre’s responses to the climate emergency, such as environment minister Prakash Javadekar’s #SelfiewithSapling campaign have frustrated the activists. “Make people conscious, yes, but the onus can’t be on them. The answers lie in a bigger space. Do we still believe in our constitutional values, dharti maa and Ganga ma and all these things we sold to the world?” Rocha asks.

Rocha will keep carrying on, but he doesn’t see the government changing policies if it continues to back “Adanis and Ambanis”.

Inspired by Greta Thunberg’s School Strike, children across the world are organising for climate action. To insist that ‘moderate’ measures by apathetic governments and adults will no longer do, they are skipping school as part of the Fridays For Future campaign. What future are they studying for, they ask? Another prominent citizens’ group that has quickly spread internationally, including in India, is the Extinction Rebellion.

The UN theme for this Environment Day was ‘Beat Air Pollution’. On June 5, Delhi’s Air Quality Index (AQI) was 192 (toxic). To put this in perspective, the US ranges between 15-20 AQI across most states, with the highest offenders at 70.

Delhi regularly crosses into the 500+ territory in the winter, but is not the sole problem in India, which has 15 of the world’s most polluted cities. Satna in Madhya Pradesh, home to a number of cement factories, has an AQI of 880.

This much is universally accepted of climate science: reducing carbon footprint and increasing green-cover are essential to halt global warming and improve air-quality. So it would seem absurd to cut trees, particularly in Delhi.

Last year state-owned construction company NBCC planned to chop around 16,500 trees in seven South Delhi areas for redevelopment of Central government accommodations. Citizens’ group ‘Delhi Trees SOS’ sprang up in response to protest this and a petition was filed in the high court challenging the clearance given to the project.

Since then, various loosely organised citizen groups like Clean Air Collective and My Right To Breathe have been actively fighting deforestation in Delhi. A shifting membership includes concerned parents like Bhavreen Kandhari, activists like Vimlendu Jha of Swechha, researchers (Kanchi Kohli) and advocates like Ritwick Dutta, who has been vocal in critiquing the pro-corporate environment policies of the government.

Legal battles have also been opened on the Ministry of Housing and Urban Affairs’ claims of compensatory afforestation as a solution. Bhavreen Kandhari, who is fighting an ongoing court-case, says, “If you cut trees in Sarojini and then plant saplings in Dera Mandi, how does that help the air quality here?”

Further, as activists and researchers have repeatedly said, compensatory afforestation does not work to “undo” anything. Implementation has been shoddy at best and doesn’t account for ecosystems destroyed at the original site.

With Delhi, the ministries in charge of urban development and transit are under the Centre, while only the tree protection authority lies with the AAP-led Delhi government. This undermines the Delhi government’s efforts at withholding tree-cutting permissions.

Now, Kandhari says, a new transplantation policy is being pushed, which will be presented as a better alternative. But it is actually the same as cutting trees, since it’s not practically feasible to transplant, for instance, “a huge banyan tree with 400 cm girth”, she says.

In addition to being in and out of courts, the groups have also been supporting children who participate in climate strikes. On June 5, before the protest at Jantar Mantar, another children’s strike for climate action was held at Sarojini Nagar. 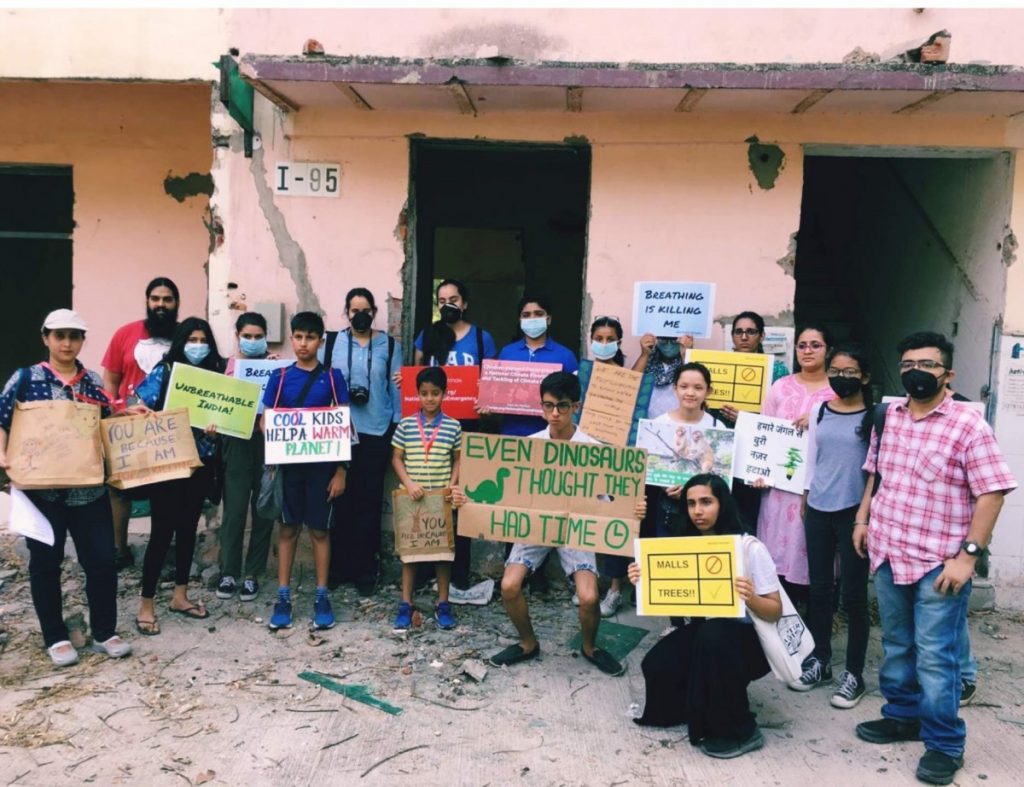 “It’s very different to Europe and Australia, where children have had to strike on their own, often in defiance of adults and teachers. Here, schools are actually telling children to participate,” Kandhari says.

Like many parents in the movement, Kandhari is extremely worried about her children. “Why should the government care, they know the voters aren’t serious.”

To tackle the problem of tangibility, journalist Aruna Chandrasekhar and photographer Ishan Tankha have created a new exhibition, ‘Breathless’ – now showing at Bikaner House in Delhi.

Featuring 60 photographs by Tankha and accompanying text by Chandrasekhar, the exhibition captures stories of resistance by ordinary Indians to extraordinary pollution and disease across India. 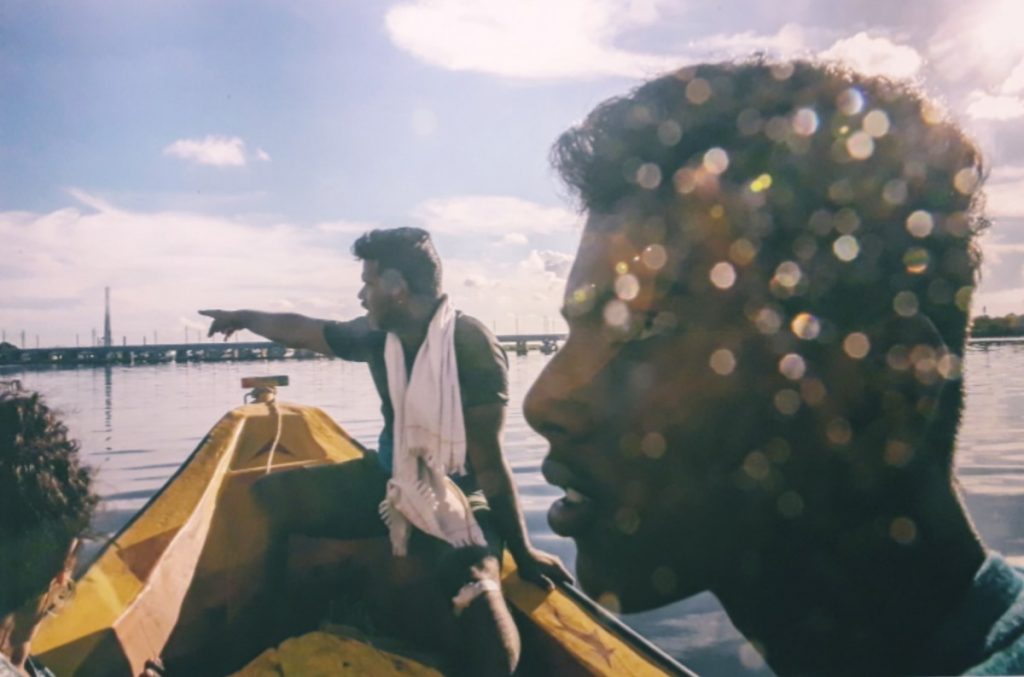 Among them, the story of R.L. Srinivasan, a kabaddi coach and fisherman who has been taking on Chennai’s biggest polluters at great personal risk. Srinivasan lives in Ennore, a fishing village whose waters have been poisoned to serve the city’s power needs. On its east lie two power plants and two ports. On the west, a coal terminal and petroleum refinery.

The exhibition, which opened on June 5, featured two panel discussions. The first was a live display of the BJP, Congress and AAP representatives agreeing on the need for governments to work together without committing to any course of action. Nimmi Rastogi said AAP’s recent efforts to convene a meeting received no interest from the other parties.

BJP’s Dharambir Singh prefaced his comments saying he knows only as much as the person on the street. When pressed on why the government continues to invest in the largest air-polluter, coal, he sidestepped the question (as did the Congress’s Abhishek Dutta), talked about slow progress and individual actions like not bursting crackers.

It’s odd that the BJP would send a non-expert to a panel on what it has agreed is a crisis. It’s puzzling that it believes a theme-song featuring Akshay Kumar singing “Hawa aane de”, in its consistent trend of putting the onus on individual citizen actions, is a solution. It is also puzzling that government subsidies for coal are nearly 400 times that of the environment ministry budget. Whom are they singing to?

The next panel had Atul Kumar Jain, a young businessman who contracted lung cancer, and whose story is featured in the exhibition. Jain and his family live in Shahdara, one of Delhi’s most polluted neighbourhoods, next to the Jhilmil industrial estate and at the crossroads of three national highways. 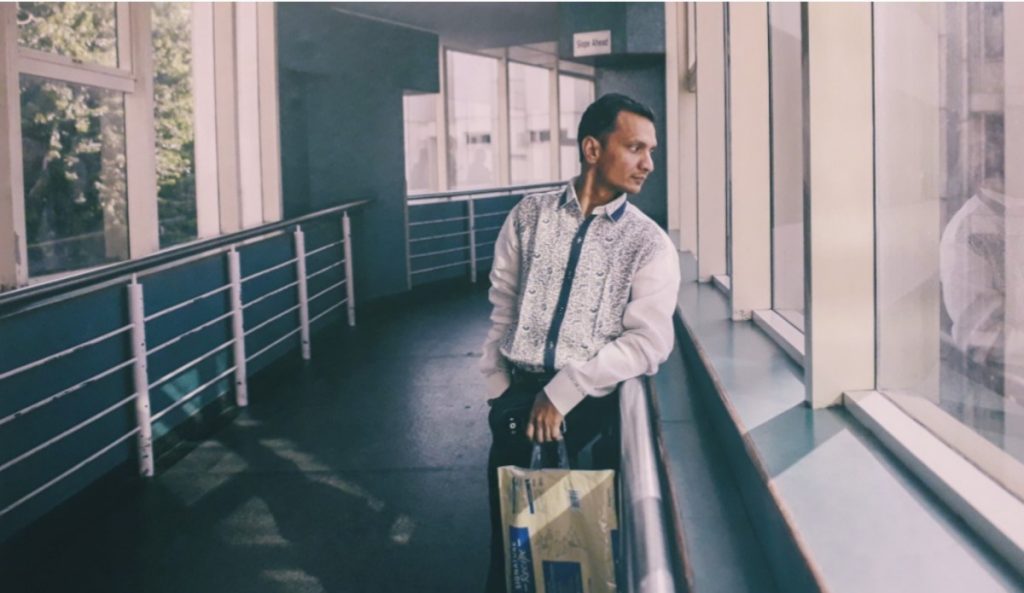 Dr Harsh Vardhan, a chest surgeon and part of Lung Care Foundation, said the number of non-smokers contracting lung cancer has become almost equal to the number of smokers. “It’s not a localised disease of the poor or rich. Everyone who is breathing is the end-user of air pollution,” he said. “Shutting schools during Diwali isn’t really making a difference. An AQI of 350 is the same outside and inside the home.”

“In the metros and tier two cities, the pink lung has now become an endangered species,” he said.

Santu, a sanitation worker in Delhi and the third panelist, decried the lack of gloves and masks for waste-pickers.

Walking through the gallery at exhibition, organised by Help Delhi Breathe and Clean Air Collective, the urgency in Santu’s words comes alive. 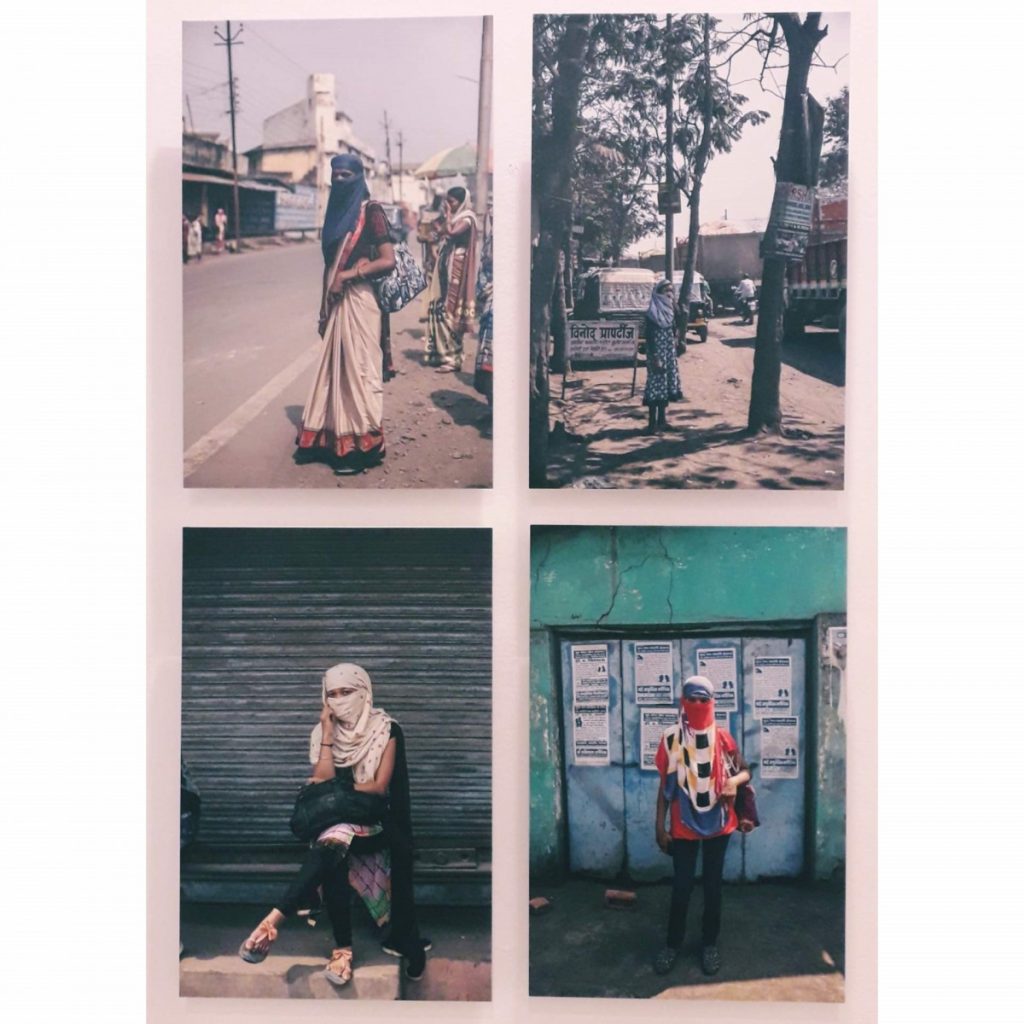 When your lives and lungs are spent tailing coal trucks spewing exhaust in your face, the unfiltered-by-forest sun beating down on you, it’s time to adapt. Text: Aruna Chandrasekhar. Photo: Ishan Tankha via Riddhi Dastidar.

Aruna Chandrasekhar traveled across India collecting these stories and hopes the exhibition will chip away at public indifference.

“We feel like we can outsource our responsibilities to organisations and movements. We think it’s not something we have to deal with… and it’s almost become cute, this climate fatalism – like ‘We’re all going to die, might as well Swiggy and Instagram till the end of time’,” she says.

“Politically it will take as long as it takes people to connect to these issues. And people connect to stories. Unfortunately we really like heroes.”

Hero or not, Akshay Kumar is not actually coming to save us. And the government will not foot the medical expenses, in case like Atul Jain, our black lungs lead us to cancer.

Breathless is on display till June 9 at Delhi’s Bikaner House Gallery.