Installing an air filter in public is more like avoiding the problem and diverting attention away than solving it. Emissions should always be controlled at the source. 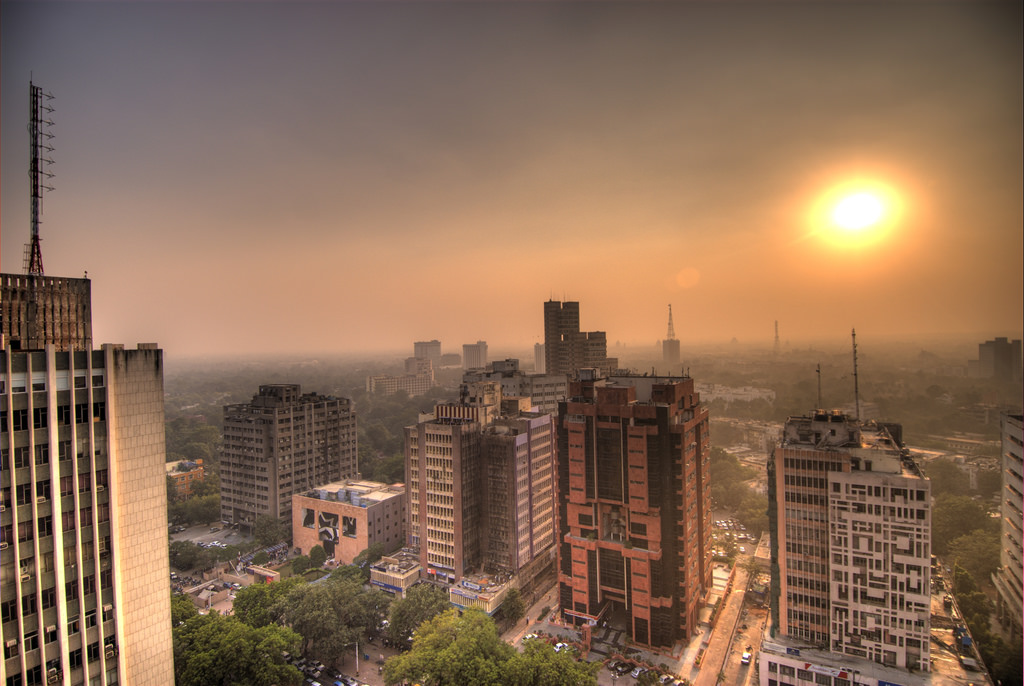 New Delhi: The first sentence we hear in an introduction to air pollution is that it knows no boundaries – unless you build a wall around it. Then again, even the great wall of China is incapable of holding back the interaction of pollutants between China and Mongolia – both of which, along with India, have the most polluted cities in the world according to the WHO. The situation in Delhi, where the conversation on air pollution has been peaking because of Diwali celebrations, additional factors like agricultural clearing by fire in the Indo-Gangetic plain, slowing wind speeds, curling north-westerly winds, dropping temperatures (necessitating the need to burn some more wood and coal to keep warm) have exacerbated the problem. At this juncture, the Delhi Government has just announced that it will install air filters and mist fountains at traffic intersections to make the air cleaner.

Imagine a sci-fi dystopia wherein the world’s pollution has breached all kinds of limits and people are walking around with glass jars and clean-air tanks on their backs; sitting in their offices or homes, where every cubic meter of air is filtered of all harmful pollutants; or even a big bubble covering a cricket stadium where the air is filtered for all to enjoy the game. All these scenarios have one thing in common – the volume of air under consideration is confined and under full control of the user or the operator. There is one inlet for air, through the filter, and the outlet is into the glass jar, the room or the stadium; not to a traffic intersection where the flow of air is not in anybody’s control.

This is not the first time Delhi has experimented with this idea. Before the Commonwealth Games in 2010, an Italian company installed a $300,000-air-filter in Connaught Place, claiming it to be the cleanest spot in Delhi. There are no numbers to back this up, except for the 2.5 kg of dust collected during its one month of operation. Our estimate for Delhi’s particulate matter pollution is approximately 60,000 tons per year, not including seasonal dust storms and agricultural-clearing emissions. That is 5 million kg per month. Assuming that Connaught Place was the cleanest because of the filter’s operations, we would actually have needed at least 2 million of them to cover the city.

A wise decision was made to curb that idea. We cannot control pollution where we breathe. However, in 2016, with the government’s intention to install air filters and mist fountains at traffic intersections, one is pressed to question the logic at play here. If we could suck up pollution on the roads, then why worry about emission and fuel standards? What difference does it make if the vehicle is one year old or 10 years old, if the vehicle is running on diesel, petrol or CNG? If the vehicle is Bharat-IV compliant or Bharat VI? What difference does it make if the waste is burnt or packed at the landfills?

Being able to control pollution by sucking out and filtering the dirty air will lead nowhere. In addition, here are eight common myths about air pollution in Delhi that are unlikely to ever contribute to a long-lasting solution.

The city has been collecting environmental tax and additional sales tax on diesel vehicles, challans during the odd-even experiment, etc., all pooled into a ‘green fund’. According to the Environment Pollution Control Authority, nearly Rs 100 crore was collected as environmental compensation charges between November 2015 and February 2016. One can only assume that this fund was close to Rs 400 crore in October, 2016, pushing the Delhi government to take desperate measures to spend it. Thus, air filters and mist fountains at traffic intersections?

According to the Maharashtra Pollution Control Board and the National Environmental Engineering Research Institute, their trail cost of operating an air filter, one of which is to be installed in Delhi, was Rs 20 lakh, with an operating area of 1,250 to 2,800 sq. m. Delhi’s administrative area is 1,500 sq. km with roads covering about 15% (approx. 225 sq. km). Let us assume that the Delhi government is procuring 1,000 air filters at about Rs 200 crore (plus operational charges) to cover an operational area of 1.2 to 2.8 sq. km. You do the remaining math.

Apart from the ill-logic of installing air filters, the proposal also lacks clarity on basic practicalities. For example: How many intersections will be covered? How often will the filters be changed? Which agency will be responsible for their maintenance? What is the budget of this program? How long will it run for? Will it be a pilot for two or three weeks like the odd-even programme was? Are we going to measure ambient air quality at these intersections to quantify effectiveness? And, more importantly, will that data be  available in the public domain (during operations and after)? That last bit is important because the Delhi government apparently operated more than 75 air quality stations during the odd-even experiments but none of that information is in the public domain – nor has it been submitted to the National Green Tribunal. If there is no transparency in the process from the beginning, this effort will remain a red herring.

If money is indeed available for air quality management, here are some suggestions:

Air pollution in cities is largely a symptom of insufficient urban planning, whether due to waste burning, traffic or industrial emissions. The only way to address it is through looking at the principal sources and finding ways to reduce pollution at their level. It takes planning, inter-agency cooperation, good governance and political will, so proposing solutions that only mitigate it at a small scale (like traffic intersections) are not, and will not be, sustainable. They are ineffective at best, and waste valuable resources that take away from working towards a constructive solution. If the government is at all concerned about reducing air pollution, it needs to plan ahead, well in advance, and not find salves that appear to be proactive on the eve of the pollution (i.e. winter) season. We already know that every winter, starting around Diwali, Delhi implodes with rising pollution affecting most of its 20 million residents. Let’s be prepared for it next time by doing something that actually reduces it at the source.