The move came after eleven days of protests by the Extinction Rebellion activist group which caused major disruptions in central London in recent weeks. 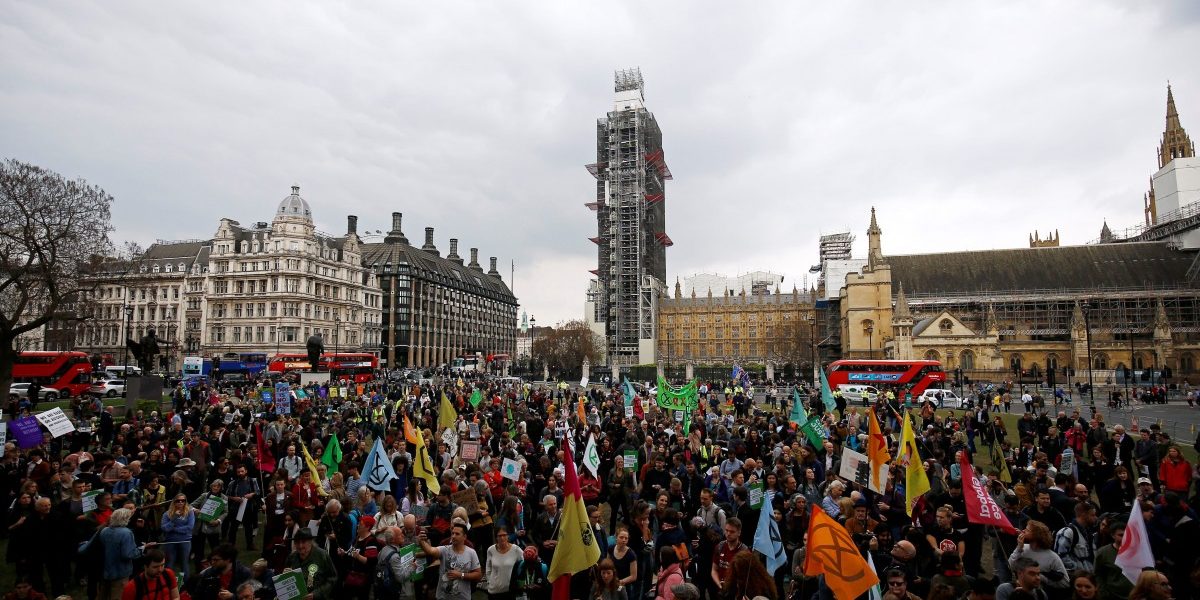 Climate change activists from the Extinction Rebellion protest at the Parliament Square in London, Britain May 1, 2019. Credit: Reuters

London: Britain’s parliament declared a symbolic climate change “emergency” on Wednesday, backing a call by opposition Labour leader Jeremy Corbyn for “rapid and dramatic action” to protect the environment for generations to come.

The measure was passed as an opposition motion, using a procedure typically ignored by the ruling party, and has no direct consequences for policy.

But it is a nod to an increasing vocal activist movement particularly among young people in Europe, who have staged school strikes and civil disobedience campaigns to demand action.

Corbyn told lawmakers they should listen to those “who have the most to lose” from climate change, saying the younger generation is “ahead of the politicians on this, the most important issue of our time”.

Also read | Punishing the Polluters: Why Large Fines Are an Important Step Towards Cleaner Corporations

“We have no time to waste. We are living in a climate crisis that will spiral dangerously out of control unless we take rapid and dramatic action now,” Corbyn told parliament.

“Today, we have the opportunity to say, ‘We hear you’ … By becoming the first parliament in the world to declare a climate emergency, we could, and I hope we do, set off a wave of action from parliaments and governments all around the world.”

Environment Secretary Michael Gove, who met activists this week, disappointed the campaigners by avoiding the word “emergency” and referring instead to the situation as “grave”.

Extinction Rebellion welcomed Wednesday’s motion in a tweet: “This has seen (lawmakers) start to #TellTheTruth about the climate & ecological crisis. They must now halt biodiversity loss, go net #ZeroCarbon2025 & create a #CitizensAssembly.”

Separately, Thunberg tweeted: “Historic and very hopeful news. Now other nations must follow. And words must turn into immediate action.”

Rebecca Newsom, head of Politics for Greenpeace UK, said in a statement that tackling climate change had long been delayed.

“The best time to declare a climate emergency was 30 years ago; the second best time is now.”