A Rare, Pristine Estuary Comes Under Threat in Karnataka

The construction of a multi-purpose estuarine port in the Aghanashini – one Karnataka's last free-flowing rivers – will result in damage to the ecosystem and the loss of traditional livelihoods. 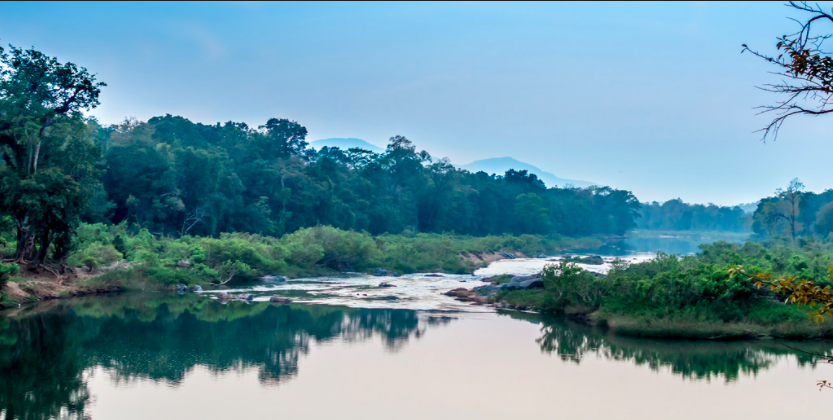 Tadadi, Karnataka: When the tides are low at the mouth of the Aghanashini river, women from the village walk out onto the mudflats to collect oysters and mussels. Salt pans and mangroves outline the estuary, and in the distance is the busy fishing port at Tadadi.

The Aghanashini is one of the last free-flowing rivers in Karnataka: it has no major industrial establishments, dams or townships on its banks. From the Western Ghats, it carries to its estuary nutrients that support about 80 species of fish, nine species of edible bivalves (such as oysters, clams and mussels) and 120 species of birds in its estuarine area. Along with its dense mangroves, this biodiversity makes the Aghanashini estuary almost ecologically unique.

It was in this rich and highly productive estuary that, in 2009, the Karnataka State Industrial and Infrastructure Development Corporation (KSIIDC) proposed to build a multi-purpose estuarine port. In late 2016, an expert appraisal committee (EAC) of the Ministry of Environment and Forests recommended environmental and coastal regulation zone clearances for the project. It is now one last step away from final clearance by the ministry, which is likely to be granted – regardless of the damage to the ecosystem, its aquatic species and the loss of traditional livelihoods.

Major concerns during the public consultation

The proposed port is a multipurpose all-weather port with seven berths, six of them for handling and transporting coal, iron and steel. Unlike a seaport, the port is to be constructed inside the estuary, on 1400 acres acquired by the KSIIDC in the 1970s near Nushikotte village. The land was originally a gazni land known as ‘midlagazni’, where the salt-tolerant Kagga rice was cultivated alongside natural fish-farming around the estuary. Now submerged, the land is in intertidal zone of the Aghanashini estuary, consisting of mudflats and mangroves.

These facts were noted by National Institute of Oceanography, the agency that has delineated the coastal regulation zone for the purposes for port development: The agency classified this proposed port land as CRZ I-A (‘ecologically sensitive area’) and CRZ I-B (‘intertidal area’). The construction will require filling up this part of the intertidal estuarine area, destroying 200 ha of well-grown mangroves, and the loss of bio-active mudflats, which will be dredged to create shipping channels.

The construction of the port will also affect the livelihoods in more than 25 villages of the Kumta taluk. Fishing, both marine and estuarine, is one of the major occupations of the region, engaging about 6,000 residents. Mangrove in the estuary acts as the major breeding ground and nursery for marine fish. The estuary also sustains villagers who catch crabs, shrimps and bivalves, as well as farmers, salt-workers, and traditional sand- and shell-miners. A study by the Indian Institute of Science values the income from informal bivalve fishing and shell-mining at Rs 5.7 crore per year – which stands to be lost to dredging.

Pollution is another concern – life in the area will be severely affected by any spills or contamination by iron, steel or oil from the ships and port. “We welcome the port, but we are very apprehensive of having so much iron, coal and steel stored in the estuary,” one aqua-culturalist and farmer in Kaggal village said. “We do not want pollution in our land, water or air.”

Pitfalls in the EIA appraisal

The EAC was proactive about calling for additional studies in December 2015. But the committee turned lenient, recommending the port for clearance even though additional studies by KSIIDC ignored key concerns raised during the public hearing. With respect to the mudflats, for instance, the project proponent stated that mudflats would be protected or shifted to another location. According to Dr. Subhash Chandran of the Indian Institute of Science, Bengaluru, “It is a ridiculous and unscientific idea to even think of shifting such a natural habitat elsewhere in a small estuary like Aghanashini.”

The EAC also recommended the project despite the lack of adequate primary data on the livelihoods offered by the estuary, especially by the oyster bed on the mudflats. They merely made it a condition that a study of economic value of the species in the oyster bed be conducted. This precludes any cost-benefit analysis by the EAC on allowing the project at the cost of lost livelihoods.

Efforts made by different organisations to conserve the area have also been ignored. According to the range officer at Hiregutti, the forest department proposed to declare 318 ha of mangroves near the Nushikotte village as ‘deemed forest’. The Honnavar Forest division has attempted to promote mangrove-based tourism and educational programmes here. The Centre for Ecological Sciences of IISc, proposed to the Karnataka State Biodiversity Board that the biologically active mudflats near Aghanashini village and the mangroves near Kaggal and Masur villages be declared as ‘Biodiversity Heritage Sites’, under the Biological Diversity Act of 2002.

The Bivalve Collectors’ Union proposed to the Karnataka State Coastal Zone Management Authority that the entire estuary be declared as a ‘critical vulnerable coastal area’. These proposals are still under consideration before the respective authorities; authorities whom the EAC never consulted.

There is also a larger issue of the necessity of the port. From KSIIDC’s feasibility report, it appears that iron is already transported in the northern region of Karnataka (Bellary-Hospet) through ports in Karwar and Belikere. The feasibility report was prepared in 2009, when illegal mining of iron ore in the Bellary region was rampant. Since the crackdown on illegal mining in 2010, the project proponent has not re-evaluated the quantum of iron available for export through Tadadi. Although this issue was raised in the public hearing, the EAC has not considered it.

Finally, the EAC never weighed the necessity of developing a port of such a size (62.36 million tonnes per annum) designed to facilitate industries that are essentially emitting greenhouse gases. This larger oversight reveals the failure of government bodies to bring climate concerns into decision-making – one final and damning level on which the Tadadi port project might be flawed and self-destructive.

Alphonsa Jojan is a Master of Law student and part of the Ecological Justice Group at Azim Premji University, Bengaluru.