The Indian Meteorological Department declared the onset of the monsoon over Mumbai, the adjoining Thane-Konkan areas, Ahmednagar, Parbhani and other parts of Maharashtra. 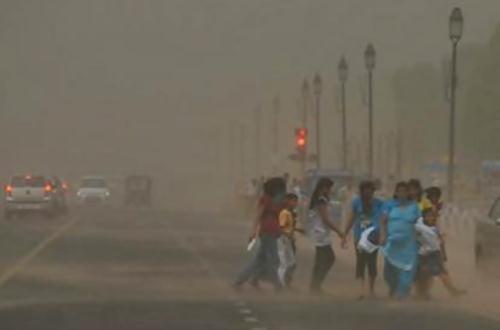 A dust storm, with winds gusting up to 70 kmph, hit the national capital . Credit: PTI

NEW DELHI: Twenty-six people were killed in dust storms and lightning that struck parts of Uttar Pradesh on Friday, while two persons died on Staurday in rain-related incidents in Maharashtra.

A downpour battered Mumbai, causing disruptions in rail and air traffic, and a duststorm hit the national capital and its surrounding areas that had been reeling under the scorching heat for a few days.

There were reports of rains in Punjab, Haryana and some parts of Uttar Pradesh, which had been sweating it out in sweltering conditions.

As many as 26 people were killed due to dust storms and lightning strikes in Uttar Pradesh, a government spokesperson said.

Dust storms and lightning hit places in 11 districts of the state on Friday night resulting in the death of 26 people, he said.

While five deaths each were reported from Jaunpur and Sultanpur, four died in Unnao, three each died in Chandauli and Bahraich, two in Rae Bareli and one each in Mirzapur, Sitapur, Amethi and Pratapgarh, the spokesperson said.

Kannauj district was also affected by a dust storm but no casualty was reported from there, he said.

Meanwhile, UP chief minister Adityanath has directed the district magistrates of the affected areas to immediately provide compensation to families of those killed and said no laxity will be tolerated.

In Maharashtra’s Thane district, fisherman Steni Admani (66) was struck by lightning at around 6 am. He died on the spot, said Shivaji Patil, chief of the District Disaster Control Cell.

Six others, who were out in the open at that time, were also injured due to the lightning strike and have been admitted to a local hospital.

A woman, who was riding pillion on a two-wheeler died after the vehicle rammed into a truck on the GB Road. An official said heavy rains apparently led to the accident.

Heavy rains pounded Mumbai, leading to a slight delay in the running of suburban trains.

The Indian Meteorological Department declared the onset of the monsoon over Mumbai, the adjoining Thane-Konkan areas, Ahmednagar, Parbhani and other parts of Maharashtra.

Trains on the suburban section of the Central Railway were running late due to the showers, an official said, adding that there were no cancellations. Two flights had to be diverted due to the bad weather.

A dust storm, with winds gusting up to 70 kmph, hit the national capital this evening, bringing some relief from the searing heat.

The weatherman said light rain was witnessed in many areas.

The dust storm pushed the temperature down by a few notches on what was a sultry day. The city recorded a high of 40.5 degrees Celsius and a low of 30 degrees Celsius, according to the MeT office.

The humidity levels were recorded at 71 per cent.

Sultry conditions abated in Haryana and Punjab after rains. Chandigarh, which received rainfall earlier in the day, had a high of 33.8 degrees Celsius, down five notches against normal.

In Punjab, Amritsar recorded a maximum of 31.7 degrees Celsius after rains.

Haryana’s Ambala, lashed by a heavy downpour, recorded a high of 31.9 degrees Celsius.

However, Hisar and Bhiwani continued to brave the hot weather at 41 and 41.4 degrees Celsius.

The local weather office predicted thunderstorm and gusty winds at several places in the two states.