India’s energy sector seems to have veered decisively towards solar and wind power as tariffs tumble and investment pour in, but experts fear that overly optimistic developers could be punching above their weight. 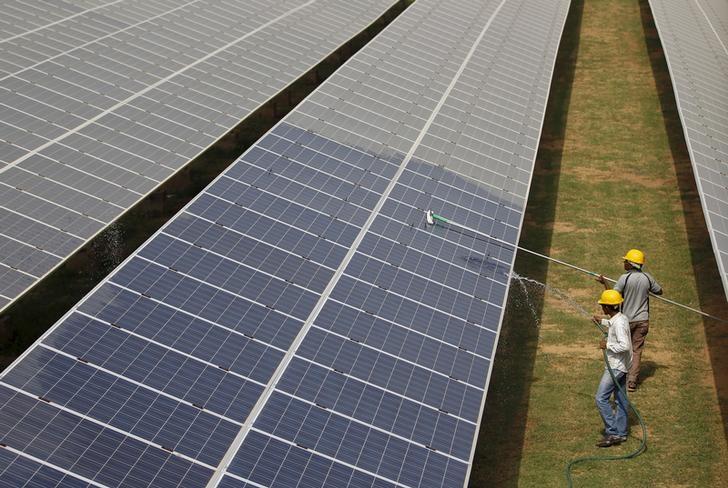 Another auction, another record. Tariffs in the Indian renewables sector are in free fall and the appetite of private developers to secure large, grid-connected solar and wind power projects by offering rock bottom unit prices shows no signs of slackening.

In the latest instance, the India arm of France’s Engie SA won a contract to build a 250 MW solar power project in Kadapa in Andhra Pradesh for a flat Rs 3.15 per kWh last week through competitive reverse bidding. “Clean affordable power for all,” energy minister Piyush Goyal announced on Twitter on April 11. “Solar achieves another record low of Rs 3.15/ unit (flat rate) during auction in Kadapa, AP by NTPC.”

State-owned utility NTPC Ltd, India’s largest producer of coal-fired electricity, has been proactively tendering out solar power projects. In the past year and a half, it has awarded contracts to add solar capacity of 2.62 GW, all below an average tariff rate of Rs 4 per kWh.

The pace of solar tenders accelerated sharply after the government announced an ambitious target of adding 100 GW of solar capacity addition by 2022. From July 2015 to December 2016, developers in India have snapped up contracts to set up 15.9 GW of solar projects. Of these, as much as 3.275 GW have been won by quoting tariffs of below Rs 4 per unit of electricity.

India’s wind power sector seems to have shifted into a higher gear as well, aiming to build wind farms and installations to add at least 6 GW of capacity every year for the next five years. The country’s first ever wind power auction in February saw a record low tariff of Rs 3.46 per kWh. This is a significant fall in rates compared with the more prevalent system of feed-in tariff at Rs 4-6. 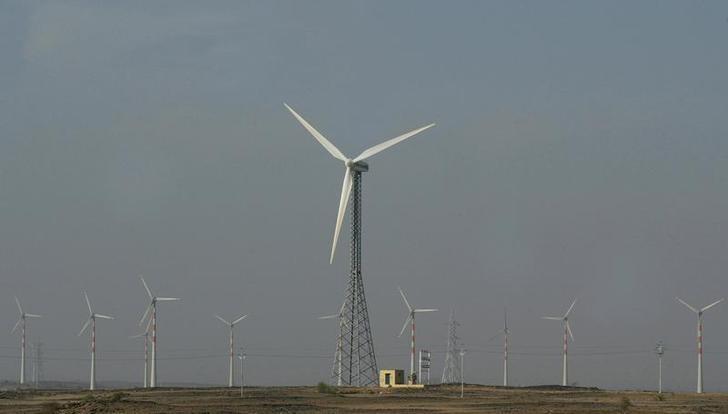 Wind turbines turn in the breeze in the outskirts of Jaisalmer in the Indian desert state of Rajasthan November 30, 2009. Credit: Reuters/Pawan Kumar/Files

India is a pioneer in allocating utility scale renewables projects, particularly solar power, through competitive bidding. It started using auctions in 2010, according to Bridge to India, a clean energy consultancy. Most other large solar markets around the world such as China, the US, Germany and Japan allocate projects through attractive feed-in-tariffs (FITs). The FIT regime – long-term contracts and guaranteed pricing tied to costs of production that the government offers to cover risks and encourage investment – was the preferred model in India as well, but that seems to be changing.

The frenetic action in the renewables sector and the drastic fall in tariffs has been welcomed by most experts, although some say overly enthusiastic developers are not adequately covering their risks.

“The Rs 3.15 tariff of solar power in Andhra Pradesh is encouraging. For tariffs to decline further from the Rewa solar park bid prices is indicative of the Rewa bid not being an outlier, but an inflection point in the declining solar tariffs,” says Kanika Chawla, Senior Programme Lead at Council on Energy, Environment and Water (CEEW), a New Delhi-based think tank. A February auction for a gigantic 750 MW solar park in Rewa in Madhya Pradesh saw tariffs crash to an average of Rs 3.29 per kWh, 24% below the previous low of Rs 4.34 seen in an NTPC tender in January 2016.

“It is important to understand the exact variables that have resulted in the decline. In the case of Rewa, the underwriting of risk on receivables played an important role in driving down prices,” Chawla told indiaclimatedialogue.net. “In the recent low bid in Kadapa, similar security on off-take and receivables also played a role in further bringing down solar tariffs.” NTPC has an AAA credit rating and strong market reputation, and therefore, offers the best off-take risk profile in the Indian solar market, according to Bridge to India.

Although project developers are bullish on market prospects, some are concerned that the plummeting rates are not sustainable. What is driving the movement and variation in tariffs? How are project developers pricing risk? Can they raise capital to implement the projects? Bridge to India has tried to answer these questions in an analysis of utility scale solar tenders in India that was released just before the NTPC auction last week.

It found that the average harmonised tariff of Rs 4.31 per kWh in the solar projects contracted out in the past year and a half translates into equity internal rate of return (IRR) of 14.20%, significantly below the benchmark expectation of 18%. This is a clear demonstration of aggressive bidding in the sector, the consultancy said.

Developers are bridging the gap in two ways, it said. They are focusing on optimisation of technical and financial project parameters and are making speculative favourable assumptions on future equipment prices, land sale values, debt refinancing, salvage value, etc. to defend project returns.

The tariff pattern is affected mainly by falling equipment costs and competitive bidding dynamics. Low equity IRRs suggest that Indian developers are not pricing risks fully and too much faith is being placed on an optimistic future scenario, Bridge to India said. “The sector has been very lucky with rapid falls in solar module prices easing most of the financial and execution challenges. Any dislocation in module sourcing or even price stabilisation will spell trouble for winning bidders,” it predicted. Module prices have fallen 26% in 2016 alone, way ahead of the 5-7% annual decline projected by most industry experts.

Chawla thinks the tariffs are still sustainable. “The market seems to indicate that the declining solar prices, while compressing risk buffers, are sustainable,” she said. “The sustainability of these bids will depend on the way risk is managed. As buffers in the tariffs shrink, risk mitigation becomes essential. This is why developers respond well to payment security mechanisms.”

Despite niggling concerns on squeezed bottom-lines, investments are pouring into India’s renewables sector. Total corporate funding into the solar sector alone, which includes venture capital funding, public market and debt financing, doubled to USD 3.2 billion in the first quarter of 2017 compared with USD 1.6 billion in the three months ended December 31, according to the latest report by Mercom Capital Group. Year-over-year funding in the March quarter was about 15% higher compared with the USD 2.8 billion raised in the first quarter of 2016, the energy consultancy firm said.

Chawla says that risk mitigating instruments could be the ideal market making support mechanism for the renewables sector in India. “Making risk mitigating instruments like a payment guarantee fund, or a foreign exchange fund available to developers at subsidised rates could play an important role in deepening the renewable energy market, and bringing down the cost of finance and in turn the cost of renewable electricity.”

“However, for the renewables sector, the principal requirement from the government and all its affiliated machinery is enforcement of power purchase agreements, enforcement of RPOs (renewable purchase obligations), and expeditious adjudication of disputes,” she added. “This will be essential for the viability of the low renewable energy bids, as they stretch over the 25-year period.”