As Iran’s oil supplies shrink, India wants OPEC and non-OPEC producers to step up supply. Nobody is budging just yet though. 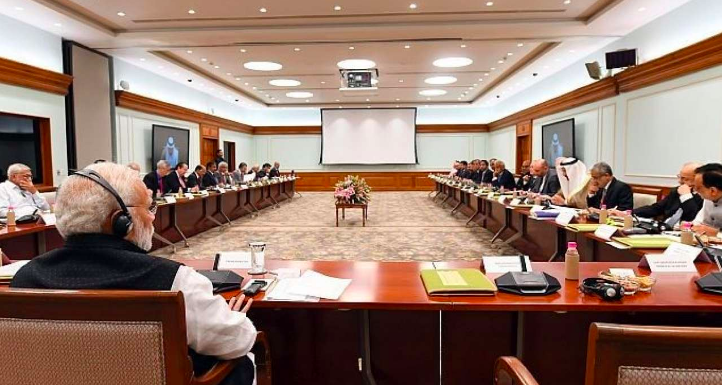 Prime Minister Narendra Modi during a meeting with CEOs and experts from the oil and gas sector, from India and abroad, in New Delhi on Monday. Credit: Twitter

New Delhi: Narendra Modi may be a globetrotting prime minister but he does not seem to have much influence with petroleum exporting countries, especially those in West Asia, if oil cartel OPEC’s response to his appeal to lower prices is anything to go by.

In a meeting on Monday where Saudi and UAE energy ministers were present along with head honchos of petroleum companies, Modi pitched for reasonable rates and a review of payment terms to ease pressure on the rupee.

Modi also appealed to top oil exporters to help countries like India bridge what he called a “resource crunch” – an impact of rising crude prices.

“The oil market is producer driven and both the quantity and prices are determined by the oil-producing countries… Though there is enough production, the unique features of marketing in the oil sector have pushed up the oil prices,” an official statement quoted the PM as saying.

India meets over 82% of its crude oil requirement with imports and its economy is feeling the pinch as the global oil market hardens on supply concerns due to impending US nuclear sanctions on Iran.

Modi’s appeal came against this backdrop.

However, the Indian prime minister’s plea cut no ice with crude suppliers, with Saudi Arabia’s energy minister Khalid A. Al-Falih saying oil prices were not within their control.

“Many factors lie outside the control of oil producers like us… we only control supply,” Al-Falih said in response to Indian prime minister’s appeal.

The Saudi minister, however, added he met the Indian prime minister as well as petroleum minister Dharmendra Pradhan and “assured them of full and continued commitment of meeting India’s oil demand and investing in India”.

In 2015, India overtook Japan to become the world’s third biggest consumer of crude oil after the US and China. Meanwhile, India’s fuel consumption is growing at the fastest pace among world’s large economies.

“India is projected to see the largest additional oil demand (3.7% per annum) and the fastest growth in the period to 2040,” OPEC has said in its latest update on the outlook for global oil demand.

BP Statistical Review, which tracks the global crude oil demand trend, too has forecast a similarly strong growth in India’s oil demand in the period running up to 2035.

Citing India’s fast-growing demand, Pradhan has tried to persuade OPEC to end the Asian premium that its members charge while selling crude oil to India.

‘Asian Premium’ is the high price Asian countries pay to buy oil from OPEC. Rich US and European countries get oil at comparatively low prices.

Pradhan has raised this issue with OPEC at different international forums and in bilateral meetings with OPEC member countries but his aggressive pitch has failed to impress the oil cartel.

As Iran’s oil supplies shrink due to fear of impending US nuclear sanctions on November 5, India has appealed to OPEC and non-OPEC producers to step up supplies to make up for the reduction in Iran’s oil exports. However, not all OPEC members have responded to India’s plea, leaving India worried.

OPEC and allies haven’t yet kept their promise of raising oil output by one million barrels a day, Pradhan said on Tuesday, though he did not blame shortage for high prices.

“According to our information, Russia and Saudi, the major two contributors in OPEC, have increased their production but some other countries are lagging,” Pradhan said.

India’s high and rising dependence on oil imports remains its soft underbelly. In recent months, investors have pulled out of India on growing concern over the Modi government’s ability to finance yawning current account deficit (CAD).

Foreign portfolio investors have withdrawn Rs 93,392 crore from Indian equities and debt market so far this year, as per data compiled by National Securities Depository Ltd. The rupee has borne the brunt of capital flight.

The Indian currency has lost more than 14% of its value against the US dollar this year.

Global financial services firm Nomura has projected India’s CAD could rise to 2.8% of GDP in 2018-19 from 1.9% in 2017-18. However, this projection could well prove an underestimate if the oil market continues to rally.

The Modi government also faces the risk of electoral backlash as it struggles to cushion consumers against the rising price of oil in the international market.

The government on October 5 cut petrol, diesel prices by Rs 2.5 a litre each to provide relief to the consumer from rising fuel prices. But the relief proved short-lived as oil marketing companies (OMCs) are hiking petrol, diesel prices on a daily basis in line with movement in the global market.