How Meaningful Are Some Estimates for India's Coal Consumption Data?

In recent years, BP's estimates for India have contained what appears to be a record of over-optimistic projections.

A worker unloads coal from a goods train at a railway yard in Chandigarh July 8, 2014. Photo: Reuters/Ajay Verma 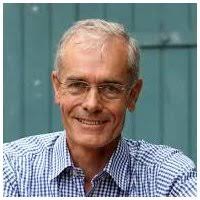 BP’s annual Statistical Review of World Energy commands significant attention in global energy circles and the media. Many businesses, investors and policymakers use data from the report, the 69th edition of which was published in June 2020, in their plans and decision-making.

When last year’s report announced a year-on-year increase in India’s coal consumption of 8.7%, this milestone was celebrated not only by the coal industry in Australia and globally, and by fossil-fuel sympathetic think-tanks, but was even noted by influential sources such as international financial services giant Price Waterhouse Coopers which observed that: “India recorded the most significant rise in coal consumption, increasing its use by 36.3 Mtoe (mega-tonnes of oil-equivalent) (8.7% increase) in 2018. This increase is equivalent to the coal consumption of the whole of Central and South America.”

While the impact of such figures cannot be known, it would have been lessened had it been reported as 6.3%, the revised growth rate for the same year that can be calculated from this year’s report.

This would certainly have been true for BP’s initial report of 4.8% growth for 2015, downgraded to 2.4% and then again to 2.0% in the following years, by which time the official Indian statistics for the equivalent financial year showed coal consumption to have grown by only 1.8%.

Furthermore, as shown below, actual consumption growth for that financial year, when power plant stockpile changes are accounted for, was virtually zero.

For the most recent five years for which BP has published both original and updates one year later (i.e. for 2014-18), all are revised downward, with the average of the original growth rates being 6.6%, and that of the corrected figures 4.9%.

Figure 1 shows these successive revisions since 2014. These are readily calculated from BP’s data, but explicit corrections to the rates of change themselves are not provided. The figure also shows that in three of the four years for which a further update was provided two years later, an additional, though much smaller, downward correction was made. 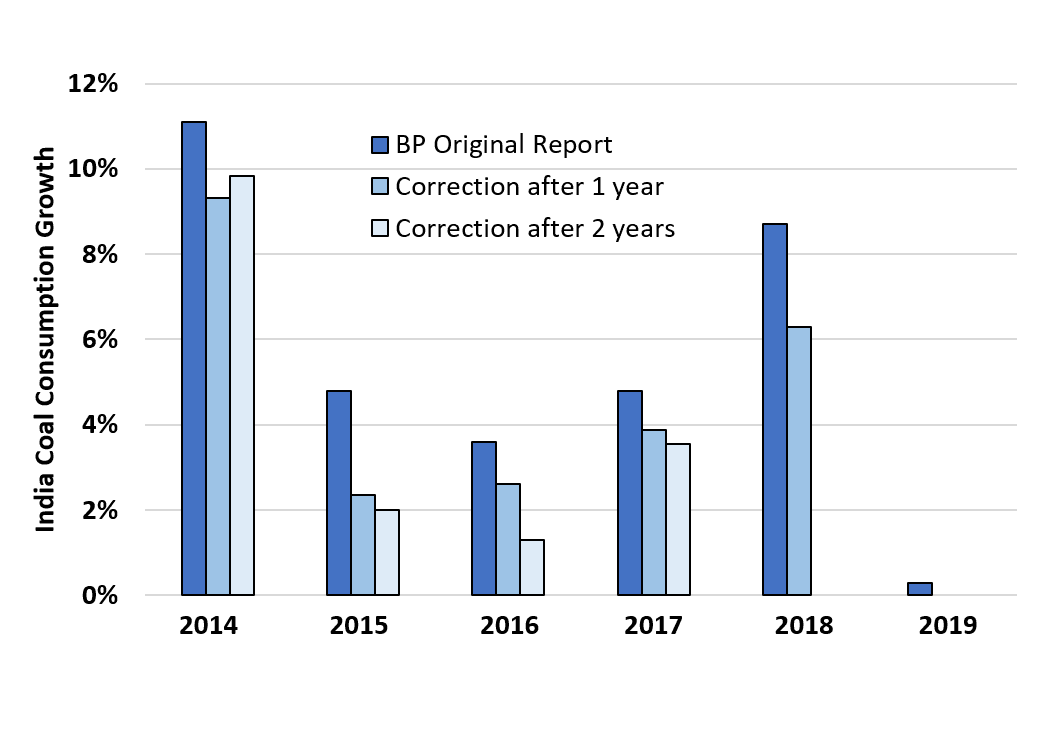 The production of such a statistical compendium, covering all energy sources worldwide for the preceding 10-year period, is certainly a mammoth and inherently error-prone undertaking, and some initial estimates will inevitably prove to be incorrect.

Whatever the reasons for these revisions, readers of the BP report should be wary of data for which substantial revisions are the norm, especially when they tend to be in the same direction. Of course, as a longer history of accessible high-quality data becomes available for a particular statistical series, fewer corrections should be needed.

Notably, a comparable analysis of BP’s coal consumption values for China and the US shows fewer and much smaller corrections.

Figure 2. Size and Variability of Corrections Made to Original BP Coal Consumption Growth Rates for India, China, and the USA 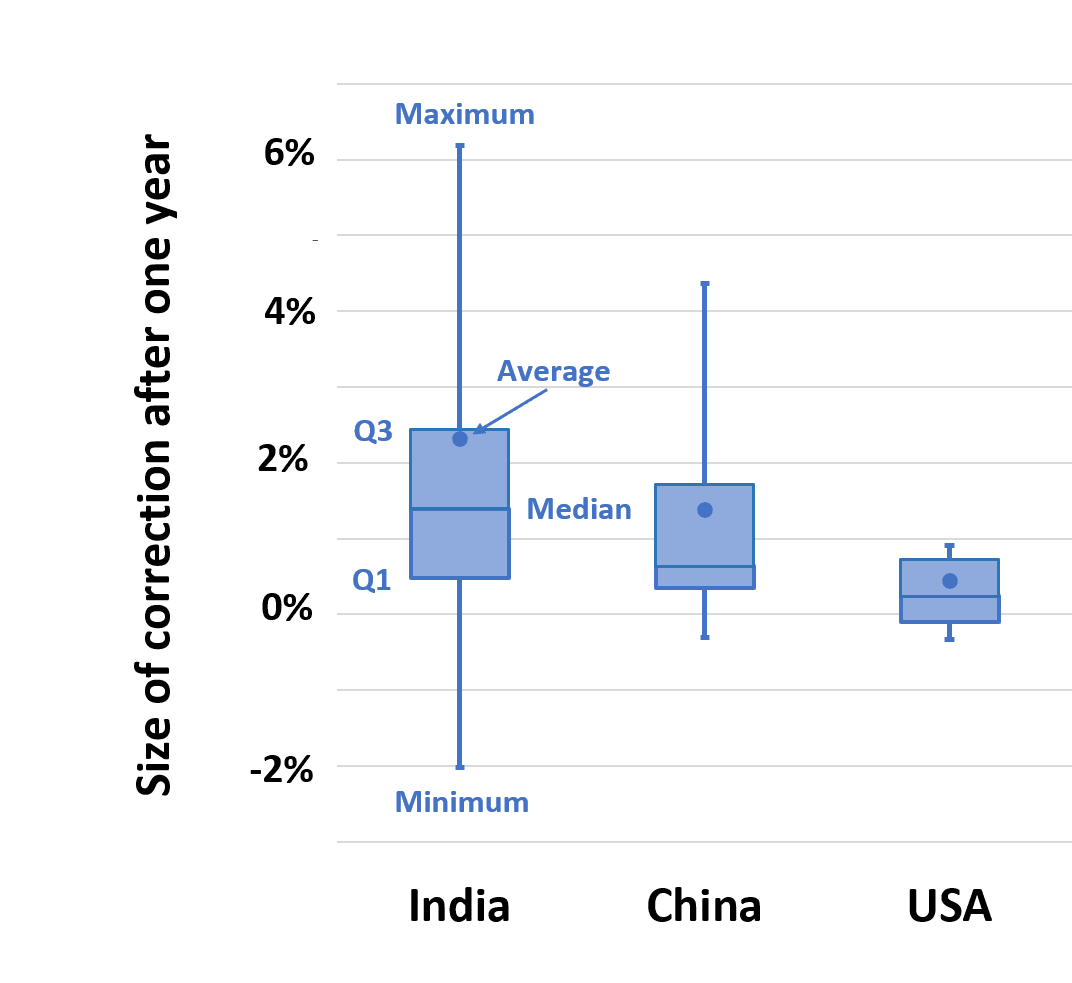 BP’s documentation of its sources and methods sheds little light on the reasons that its India data undergoes these substantial, repeated revisions in subsequent years, which more often overestimate than underestimate the values subsequently published by official Indian government sources.

Until this year, BP used “mega-tonnes of oil-equivalent” (Mtoe) as its energy unit, changing this year to exajoules, but the Indian coal ministry reports tonnages, rendering direct comparison of absolute quantities difficult. Rates of change should, however, still be comparable. Even though BP’s reports use calendar years, while Indian data follows the financial year (April to March), this still leaves nine months of overlap between the two data sets, enough for a reasonable comparison.

Of course, any large year-to-year changes between January and March will affect BP and Indian government data differently. This may well be the case for next year’s reports because of the COVID-19 pandemic, although its more dramatic economic effects have all occurred since April and should appear in both calendar year 2020 and FY21 data.

These differences aside, a comparison of the two is worthwhile. Figure 3 shows the original BP growth rate for each year since 2014, and the Indian government’s value for the corresponding periods (i.e. since FY2014-15). (A third data set adjusting the Indian data is also shown and explained below.)

For 2014 growth rates were high and extremely close between the two sources. For three recent years (2015, 2016 and 2018), BP reported higher – sometimes substantially higher – growth than the Indian government, while 2017 was an exception in which BP was below India’s data. 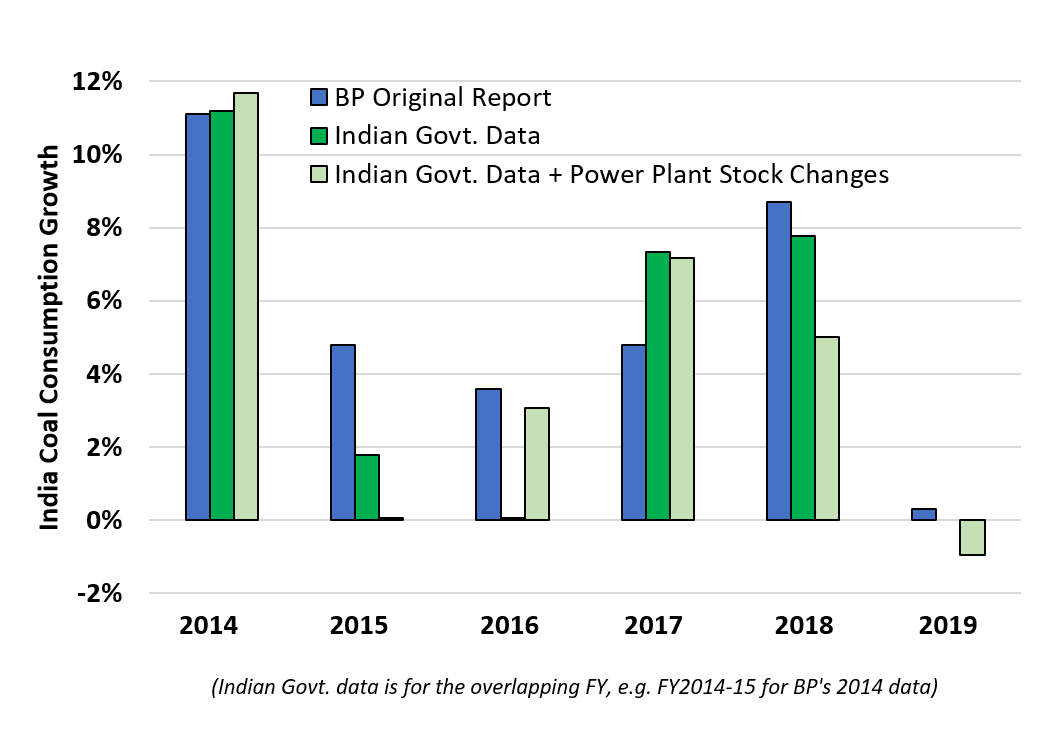 The Indian government’s official estimates of coal consumption are published annually in its Energy Statistics report. It is impossible to verify these estimates from the constituent industry consumption data, as these figures are not all readily accessible and do not always agree. For example, the Energy Statistics document reported less coal being consumed for electricity generation than was reported by the Central Electricity Authority for 2016-17 and 2017-18, but more in 2018-19.

Fortunately, it is possible to confirm the estimates from first principles using other publicly available sources that are more up to date. This requires adding net imports to total domestic production from all public and private mines (adjusted for pithead stock changes, i.e. dispatched coal). The relevant values are available from other documents including the Provisional Coal Statistics and Coal Directory published by the Coal Controller, and they are extremely similar to the ‘Total Primary Supply’ reported in the latter.

There are two useful features of this procedure, shown in Figure 3. It allows an estimate to be made of the latest year’s consumption for which the official figure is not yet available, by supplementing Government sources with published data of production and despatch from private mines.

It also reveals an apparent omission in the official calculation – changes in coal stocks at power plants appear not to be taken into account. They are explicitly excluded “for simplicity” in calculating the Total Primary Supply. Although power plant stock changes will balance out in the long term, and in some years barely change from the end of the previous year, they can be significant.

Also read: The Shining Example That Is NGT’s Verdict Against Jindal Power and Coal India

For example, when changes in power plant stock levels are included, actual consumption barely grew at all in 2015, compared to BP’s 4.8% estimate or the Indian Government’s 1.8%, while it grew more in 2016-17 than officially reported (3.1% vs. 0.1%). In each of the last two years these stockpiles have accumulated an additional 14 Mt. In consequence, the 8.7% growth BP reported for 2018 was, in fact, a less noteworthy 5.0% using Indian Government data and with the stockpile build-up not treated as consumption.

Just as single-year growth figures are highly prone to large oscillations and should be treated with considerable caution, the other summary statistic BP regularly provide, a 10 year average (5.7% in this year’s report) can be equally misleading for the opposite reason, as its timeframe is too long to have any real meaning given the speed of change in India’s power sector. A more useful time window might be three years, enough to stabilise the data without reaching back a full decade.

Investors, businesses and policymakers might, therefore, be better guided by the compound annual growth rate (CAGR) of 3.4% in actual coal consumption since 2016-17 than either 5.7% over 10 years or 2018’s incorrect, headline-grabbing and subsequently downgraded 8.7%.

Measurement accuracy matters. These statistics influence decisions, and BP’s recent tendency to overstate Indian coal consumption growth should be kept firmly in mind when making them.