"The Indian government stands on the wrong side of history when a number of countries have decided after Fukushima to shun nuclear and adopt renewable technologies." 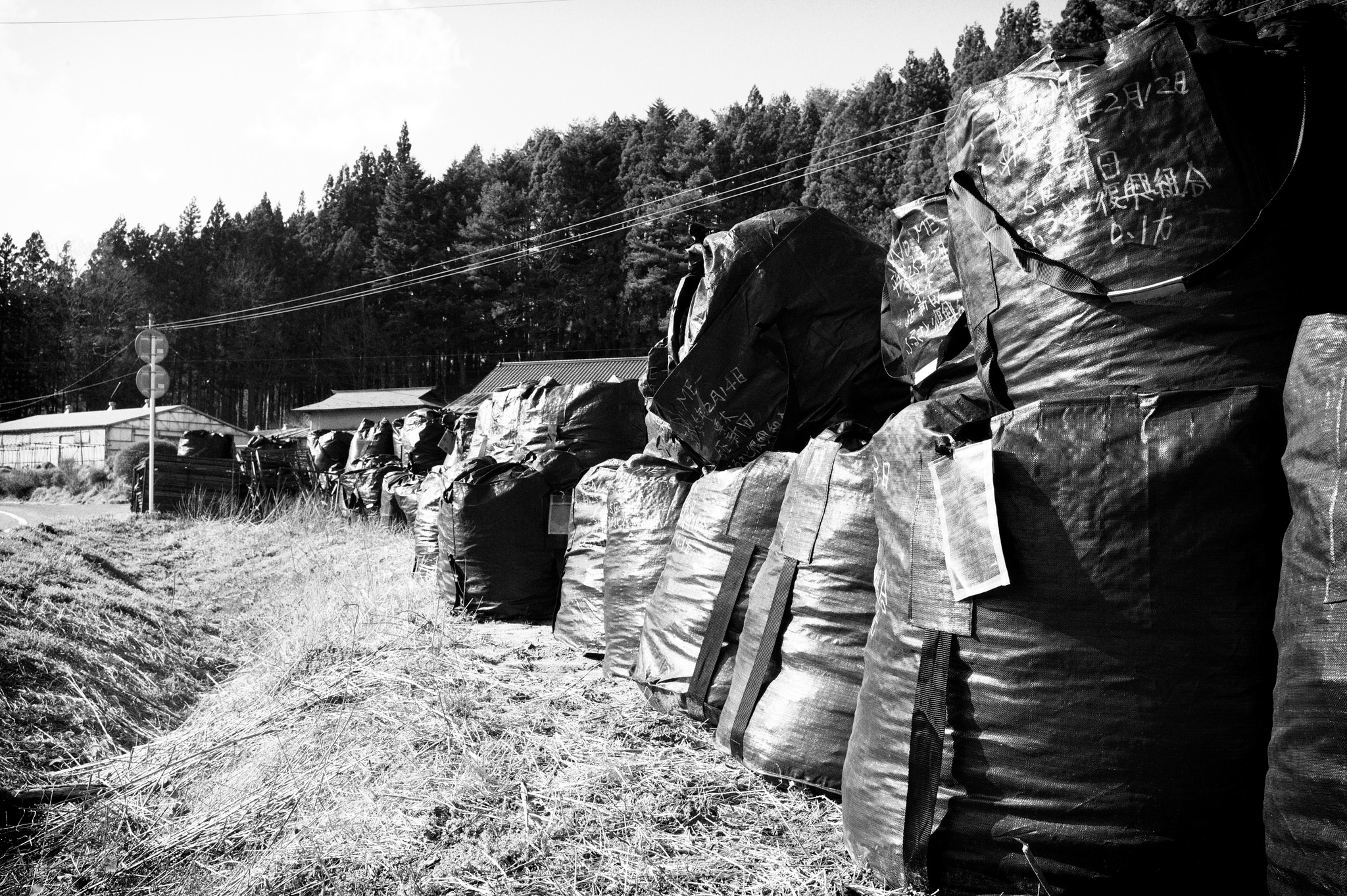 Bags of trash collected from Fukushima prefecture, Japan, in 2013. Credit: vannispen/Flickr, CC BY 2.0

As Indian Prime Minister Narendra Modi starts his three-day visit to Japan, the women of Fukushima have invited him to meet the children affected by the nuclear leak of 2011. The open letter is by a group called the Fukushima Women Against Nukes (FWAN), a network formed in September 2012 using various direct actions such as sit-ins, demonstrations and legal petitions to demand justice in the aftermath of the disaster. They are urging Modi to not sign the Indo-Japan Nuclear Agreement (IJNA).

“We are women living in Fukushima prefecture, where a massive accident unparalleled in history occurred in March 2011, at Tokyo Electric Power Company’s Fukushima Daiichi Nuclear Power Station,” they wrote in the letter. Many of the women who signed it have evacuated Fukushima (both voluntarily and due to residential restrictions placed by the government because of high radiation levels) and now live scattered across Japan. They convened a meeting on October 29 and finalised the details of the letter addressed to Modi.

“We do not want India to buy nuclear power plants from Japan and therefore, we didn’t want IJNA to be signed,” said an FWAN representative.

“The objectives for the letter are two-fold. One, the Fukushima women strongly desire that no one in the world should face this kind of tragic disaster again,” a signatory to the letter said.“Our homelands have been stolen and we have witnessed our families and communities being divided. Secondly, it is shameful for Japan to attempt to sell its nuclear technology to India. Considering that Japan has not even properly contained the accident or sufficiently addressed the suffering of Fukushima people – some 90,000 of whom still cannot return home – we are asking Prime Minister Modi to personally visit Fukushima to see with his own eyes and learn for himself the actual state in Fukushima.”

“We strongly hope that PM Modi will at least consider visiting Fukushima to verify before buying Japanese technology.” She added that Japanese government is attempting to restart nuclear reactors all over Japan and they are opposed to this proliferation.

The Indian government has been keen to sign the agreement in order to source components for its order of French and American reactors. “The Indo-US nuclear deal happened in 2005 and India signed another with France in 2008,” said Kumar Sundaram of the India-based Coalition for Nuclear Disarmament and Peace. “But construction of none of the reactors could start without IJNA. It has been 10 years since the Indo-US deal and the construction at Jaitapur in Maharashtra has still not started. The IJNA was the missing piece of Indo-US Nuclear Deal.” Under the agreement, Japan Steel Works will manufacture the reactor pressure vessels required for the reactors in 2017.

Several citizens groups in Japan are protesting in front of the parliament today (November 11) when Modi reaches Tokyo. Protests have also been planned in all major Japanese cities. The mayors of Hiroshima and Nagasaki have also made representations and statements against the deal. Opposition parties in Japan are also against the deal as they see it as a means to revive the declining nuclear industry and turn back the clock on Fukushima.

The FWAN letter discusses health hazards that the children of the area are facing. “We live surrounded by radioactive debris which emanated from the reactor. Even as our government pushes us to return to our homelands, many people think of their children’s health, and they feel that they cannot return to their original homes. At the current stage, in Fukushima prefecture alone, some 174 children have been found to have contracted thyroid cancer,” it reads.

Thyroid cancer in children has become a controversial matter among scientists in Japan. While some claim that its incidence is higher than normal, others say that it is because of advanced level of screening by the Japanese government.

After consistent demands from civil society, Japanese authorities started screening over 300,000 people aged under 18 years for thyroid cancer in late 2011. According to results published in the journal Epidemiology in May this year, the ailment’s incidence was 605 per million (in this age-group) depending on location. According to Toshihide Tsuda of Okayama University and his colleagues, this was a 30-fold increase over normal childhood cancer rates in Japan.

The claim was contested by others on grounds that the figures were incomparable. According to them, advanced ultrasound machines were used in the Fukushima survey and they were able to pick up on a higher incidence only because they were more sensitive than the conventional diagnostic methods otherwise employed in the rest of the population. And with the conventional methods, the incidence was three per million, they added.

“The scientists continue to debate. There does appear to be a spike in child thyroid cancer rates. But the government and scientists are saying it is because testing has been common and rigorous in Fukushima,” said Caitlin Stronell, who works at the Citizens’ Nuclear Information Center, Tokoyo. “To me, the more important issue is that the Japanese government is trying to make the data unusable through various devious means.”

Talking about continued suffering of the people at ground zero of the disaster, Stronell also said, “Testimonies of people’s suffering, government’s unwillingness and inability to help them and injustices inflicted in the name of profit seeking by the nuclear industry worldwide must reach a world audience. We feel that this message is not getting out. The world tends to think, and governments and the nuclear industry are making them think, that Fukushima is over and cleaned up and life is back to normal. Nothing could be further than the truth.”

A 2013-report by the World Health Organisation (WHO) said that the major health risks involve different types of cancers among the children who were present within what are now high-radiation zones. “A breakdown of data, based on age, gender and proximity to the nuclear plant, does show a higher cancer risk for those located in the most contaminated parts,” Maria Neira, the WHO director for public health and environment, told The Wire.

According to the report,

Nearly one-third of the emergency workers inside the Fukushima plant had an increased risk of cancers as well. At the same time, the report was careful enough to note that those who did not come in contact with high levels of radiation did not face increased risks.

Apart from cancer, the report also identified psycho-social trauma as a hazard. It said that displacement and fear will have long-term impacts on the people’s mental health and the government should provide proper and sensitive treatment. And then there is the social discrimination: the marriage of young people has become a matter of concern with many fearing that marrying into a family of Fukushima could mean an early bereavement.

Apart from health hazards, the issue of fixing responsibility is yet to be resolved. Court proceedings are still on to determine the exact cause of the accident, the influence of human errors and whether the accident was handled appropriately after the earthquake and the tsunamis struck.

The cases in the court of Japan are still pending. The report by the Fukushima Nuclear Accident Independent Investigation, constituted by the Japanese government, was submitted in 2011. It said that the accident had been avoidable and that the secrecy maintained around safety norms of the plant led to the disaster. However, legal battles for compensation and treatment as well as for holding the Tokyo Electric Power Company, which was responsible for the plant, responsible are pending in courts.

Activists say they do not want other countries to suffer – including India. “We feel that it is totally immoral to be selling nukes for profit to people overseas when they have been the cause of so much suffering here. Sort of like selling poison for profit,” Stronell said. She explained that India and Japan can have safer pacts in the field of energy that can benefit common citizens in both the countries. “In terms of energy, Japan could help develop renewables that are much more suited to Indian conditions and will be much more help to actual Indian citizens – those in villages for example, where the grid doesn’t reach.

The CNDP has also opposed the IJNA. “It is the remaining piece of the Indo-US nuclear deal, as the reactors imported from France and America cannot be set up in India without Japanese technology, for which this deal is needed,” said Sundaram. “The Indian government stands on the wrong side of history when a number of countries have decided after Fukushima to shun nuclear and adopt renewable technologies. Nuclear expansion in India would devastate farmers, fisherfolk and common people.”

The women of FWAN stand in agreement. Their letter ended by urging a visit before making a decision about signing the nuclear pact. “Mr Modi, we would like to invite you to visit Fukushima and see its condition firsthand. The destroyed reactor, the towns where people can no longer live that have become like abandoned towns, the mountains of radioactive rubble, the towering incinerators, and children who can no longer play freely outside…”

Jyotsna Singh is a freelance journalist.