Can Solar Power Save Bangladesh From Its Environment and Energy Crisis?

The country's natural gas resources are on the brink of exhaustion and the government is taking up coal as a replacement for natural gas.

Understanding the connection between environment and energy barely needs an expert. Even a layman can well figure out that the two are sides of the same coin.

If we delve into studying the relationship between energy and environment in the context of Bangladesh, there are two takeaways.

First, since the lion’s share of Bangladesh’s energy resources still comes from natural gas, the South Asian nation of 170 million citizens is more environmentally conscious than most.

Secondly, the country’s natural gas resources are on the brink of exhaustion within the next few years and the Bangladesh government, like a lot of other governments across the world, is taking up coal as a replacement for natural gas.

It means, Bangladesh is going to be on the bad side of the environment soon.

Unfortunately, Bangladesh doesn’t have very many options. As a developing country thriving to achieve middle income status, Bangladesh is going to need around 34,000 MW (megawatt) of electricity by 2030.

The current total installed capacity (including captive power) of the country is 21,419 MW. So, it still has a long way to go before it reaches that mark and experts concerned with the sector say that coal is the most viable vehicle to reach that capacity.

Some experts have vehemently advocated for renewable energy, especially, solar power. As a country located in the northern hemisphere with the sea towards its south, Bangladesh has no dearth of abundant sunlight. But it takes a lot more to be able to harness and channel this solar energy properly.

Also read: Bangladesh is Building a Dirty and Expensive Coal Plant Next to the World’s Largest Mangrove Forest

Bangladesh lacks there and for some obvious reasons.

Bangladesh is a small country of 1.44 lakh square kilometres with an enormous population of over 170 million, making it one of the most densely populated countries in the world. Solar power, as experts have pointed out, requires large swathes of area.

That means for a 100MW power plant, 500 acres of land is needed just to place the solar panel (more lands will be required to establish the transmitting and plant facilities). In a populous country like Bangladesh, large barren areas are difficult to procure except in some char areas.

However, these areas would not suffice for the construction of such plants since very few entities would be interested in investing large money on a changing landscape. 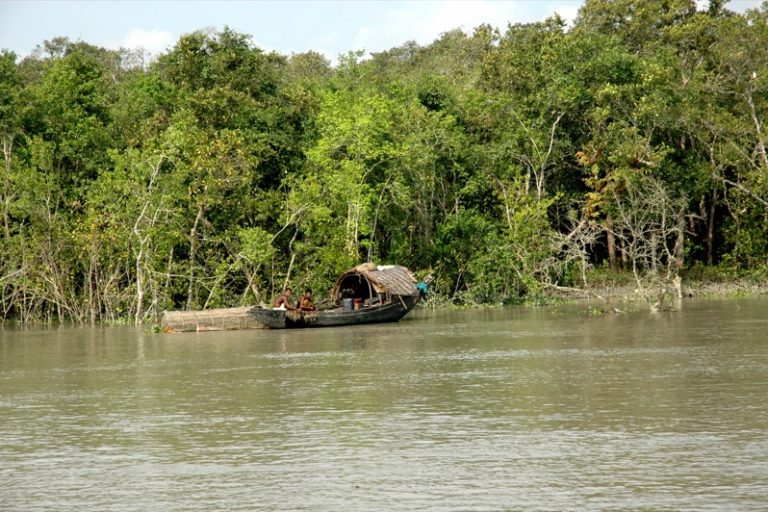 Ironically, people residing in remote locations of Bangladesh pay one of the highest rates for electricity. Photo: bri vos/Wikimedia Commons.

There are other problems for solar powered plants in Bangladesh as well. Climate change has made changing weather conditions in Bangladesh even more unpredictable and the unexpectedly prolonged summer rains of this year in the country are an example of that.

So far, the picture doesn’t look bright but there are silver linings. For example, a two bigha (four bigha is one acre) plot in a remote island named ‘Paratoli’ in the Narshingdi districts shines enough to stave off the cloud of doubt on solar power.

The island hosts a 141 KW solar grid plant of the country and now provides connections to 613 families to provide electricity to nearly 5,000 people with the establishment of a nine kilometre long transmission line. It has the capacity to supply uninterrupted electricity to 724 households and 124 small scale commercial establishments. The cost of the total project is only Tk 6 crore.

The solar powered grid in Narshingdi is not the only one. In fact, there are 11 of such solar mini-grid plants across the country now. Earlier, the nation’s first commercial solar mini-grid was established in the coastal island of Sandwip in Bangladesh five years ago with financing from Infrastructure Development Company Limited (IDCOL-also one of the financer of Paratoli plant).

That pioneering experience has become a learning platform for other investors, financing and developing agencies, in addition to policymakers for promoting solar mini-grid systems.

After the Sandwip experience, it was realised that a similar application of solar mini-grids for the vast number of rural markets in off-grid locations can offer a significant improvement in socio-economic conditions of such an underserved population.

Ironically, people residing in remote locations of Bangladesh pay one of the highest rates for electricity from diesel-powered micro-grids. Surveys showed that, depending upon the type of appliance being used, daily rates being converted to tariff ranged from Tk 46-76 per unit.

So based upon tariff prior to solar electrification, financial analysis and project financing criteria of IDCOL, a tariff of Tk 30-32 per unit was set so that rural people could afford it.

The government has a plan to establish 50 such plants by the end of 2019 and, if that is undertaken, it will ease pressure off the national grid. Aside from these solar-powered plants, the Solar Home Systems (SHSs) that power rural households is another success story.

There is no doubt that the current government is a strong advocate of solar power, and the industry, as a result, has been a big beneficiary of its support. Directly, the government allows companies to import solar panels free of duties, provides loans and grants to private organisations through IDCOL and even offers refinancing options.

Furthermore, companies that manufacture solar modules or those that use solar modules to contribute solar power to the national grid are privy to tax benefits and feed-in tariffs.

Indirectly, the government lends its weight to POs to help them navigate the socio-political nuances of rural municipalities; it also ensures that the IDCOL is not tangled in red tape – a fact that has contributed considerably to the programme’s success.

All these successes prove that-solar power is, in fact, a very viable energy option for Bangladesh. Of course, it cannot act as a base load power source, but can can immensely contribute to the energy demands of the country.