Will Continue to Work For Women And Youth in Samajwadi Party, Says Richa Singh

Richa Singh is the first ever woman President of the Allahabad University Students Union. 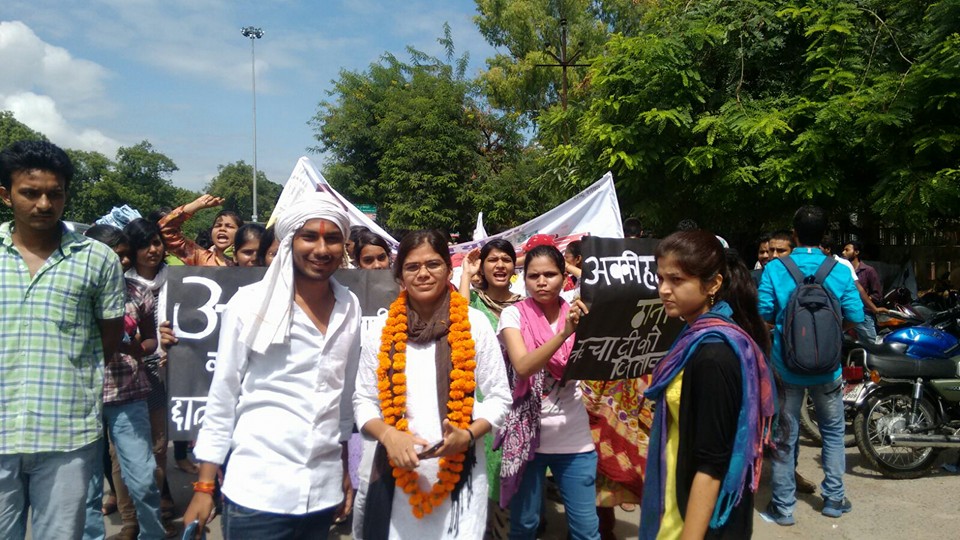 Richa Singh during her campaign for the Allahabad University elections. Credit: Facebook

It made an unusual sight when diminutive Richa Singh, the first ever woman President of the Allahabad University Students Union (AUSU) in its 128-year history, stood next to Kundanika Sharma, a former BJP corporator from Agra who is facing charges of hate speech. The occasion was the entry of both women into the Samajwadi Party in a surprise development that many are seeing as a preparatory step for the 2017 elections. While Sharma was immediately named for a 2017 ticket from Agra by the Samajwadi Party, it was Singh’s entry into the Samajwadi Party that caused more consternation. After all, she is one of the new icons of today’s student politics, enjoying the fame at events alongside Kanhaiya Kumar, and her independent stance had added to her stature. How does she see her present affiliations compared to her earlier independent stance?

The Wire caught up with Singh after she joined the Samajwadi Party on the April 15 in the presence of Sharma.

Tell us about your joining the Samajwadi Party after winning the AUSU election as an independent candidate?

I can say with all honesty that this was a difficult decision. It wasn’t taken without sufficient political analysis by my team and I. In Uttar Pradesh, you may be aware that any kind of progressive politics is difficult, given the slightly backward mindset of people in general. The election itself had been a difficult period for me, working without the shelter of any party banner. In fact, at the time, our team had received invitations from all four of the big groups – the Akhil Bharatiya Vidyarthi Parishad (ABVP), the National Student’s Union of India, the Samajwadi Chhatra Sabha and the Left. But we rejected them all because of the moral obligation that comes to toe the party line whenever such a step is taken.

I took the decision to contest independently in the AUSU election because of the disillusionment I saw within the student community about student politics. Many felt that students just use politics like a platform to launch their political careers without doing anything to address the basic issues with which students are grappling. That is why my team and I decided to work on issues that directly affected students, whether it was subsidised food at the canteen and the campus bus services or many gender related issues. Now, with my entry into the Samajwadi Party, I see it as an opportunity to continue working for student and youth related issues, with the added support of an organisation.

How did you approach the issue of gender in your own campaign?

My team and I asked voters to consider why no woman had made it to the post of president in the past 128 years. I told them specifically that I was not asking them for a sympathy vote as a ‘bechari’ female candidate, but then on the other hand, I asked them also not to discount my candidature merely because I was a woman. I said that I have no model of ‘kranti’ but one of creativity towards youth and student issues.

So not being bound to any particular party ideology was liberating?

In fact, we worked on ideology too. When we took a stand that Yogi Adityanath should not speak on campus, as a person known for being anti-woman, anti-Dalit and anti-minority, we were resisting the communal ideology of the ABVP and its sister organisations. This is something the Left should also have taken up.

It is because of the bold stand that you took against Yogi Aditynath that your joining the Samajwadi Party in the company of someone like Sharma is even more puzzling. How could you be standing shoulder to shoulder with someone who has had an FIR filed against her for asking for mass beheadings of the minority community?

I had absolutely no idea who Sharma was when I met her for the very first time at the function when both of us were joining the party.  In fact, in the talks leading up to the event, my team and I were only informed of the inclusion of Paritosh Tripathi from the Congress youth wing, who was supposed to join with me. Not only did I see the woman for the first time, but I did not know that she was the one who had been involved in the condolence meeting in Agra when some ministers were also named as being present. I arrived at the last moment before the function and was taken aback, but did not realise the full significance of it till later.

Some newspaper reports suggested your name being included for a Uttar Pradesh government award as a last-minute decision, too.

There are different ways of looking at this I suppose. While it may be reported as a last minute inclusion, we felt that my admission struggle against university authorities, which had led all the way to a parliamentary discussion after a question was raised, may have been the reason why I was included and feted by the Uttar Pradesh government.

You have been involved with the Swaraj Abhiyan in the past. Why not take that further, rather than join a political party?

Why join the Samajwadi Party at a time when the BSP appears to be gaining momentum in Uttar Pradesh leading up to the 2017 elections? Would you have been better off joining Mayawati?

This I can say very clearly, that the BSP has never encouraged or given space to students or youth politics. Every time they have come to power one of the first things they do is ban student elections. I have not taken my decision based on the calculations for 2017 alone. I want to work for the longer term for students and youth and women. At least, in the SP, this ideology is at least somewhere. There is scope for me to work for the inclusive politics of a socialist banner, such as for the backward, for women, for the minority and other marginalised people. Over and above all this, my long term plan is to defeat communalist forces.

Are you feeling more secure in terms of personal safety after joining the Samajwadi Party?

I am feeling more secure with a banner and organisation behind me. In fact, when I got elected as AUSU President, I felt I had a bigger responsibility – to show evidence of actual work, that would open doors for other women, and not give fodder to the people who say, women become office bearers by name only. I also feel today that I must be able to work and keep myself safe and secure – not become a victim that makes patriarchal people say to their daughters, ‘See, this is what happens to girls who want to join politics.’ This is my future struggle outside the university.

Perhaps your greatest struggle then could also be within the Samajwadi Party, whose leaders have shown the utmost resistance to the Women’s Reservation Bill and often display a feudal mind set.

Yes, I am prepared to struggle for the rights of women within the party, too. However, let me say, that whatever be the stand on the Women’s Reservation Bill, the SP actually has more women panchayat members than any other party. There is a space to work for women and gender within the party, and I am determined to do so.